Space situational awareness—the ability to view and track objects orbiting Earth—is vital to many military and civilian space applications. Being able to resolve geostationary satellites is thus drawing wide interest in the space situational awareness field. However, the largest ground-based single telescopes can only resolve large-scale structures of geostationary satellites.1 Resolving smaller details, such as antennas or instruments sticking out of the satellite's body, will require other techniques such as optical interferometry.

The Navy Precision Optical Interferometer (NPOI)2,3 (see Figure 1) is the first, and so far only, interferometer to successfully detect a geostationary satellite from the ground. We observed the DirecTV-9S satellite during the March 2008 glint season—a period during equinoxes when it is most common to see sunlight reflections from satellites—with follow-up observations in 2009.4 What we learned is that the shortest baseline length (B) of 16m available at the NPOI at the time is too long for observing geostationary satellites, which have a size scale of just several meters. 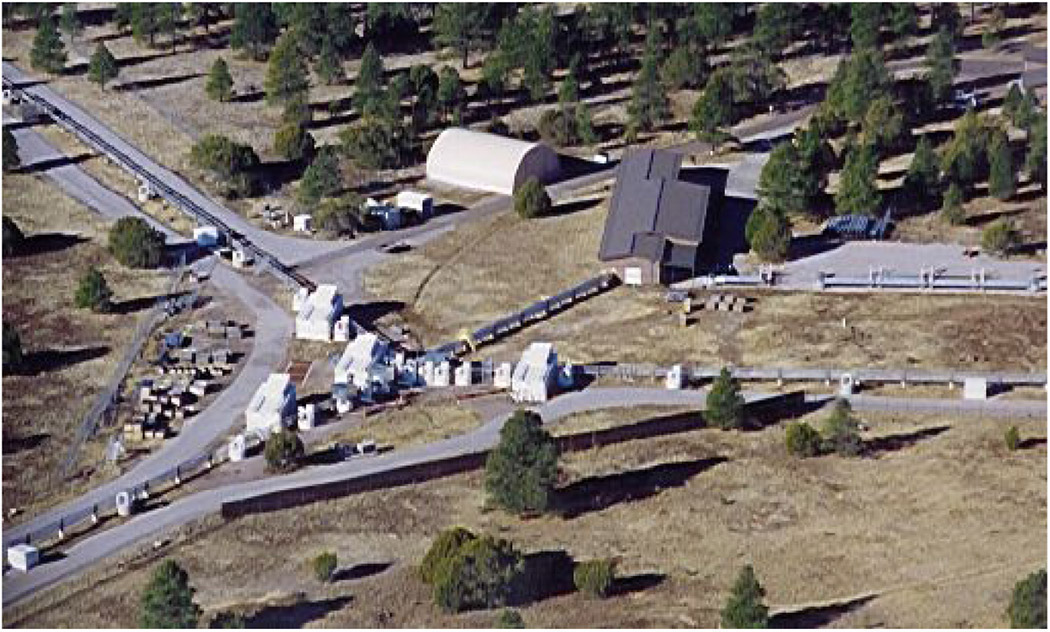 The wavelength range (λ=556–845nm) used in those observations produced a resolution (θres ∽ λ/B) of 35–50 nanoradians, which corresponds to 1.3–2m at geostationary altitude. Structures at that scale produce a fringe contrast—a ratio of the difference between the maximum and minimum reflections—of V ∽ 0.2, and structures that are only 20% larger produce no fringe contrast at all. At still larger scales, the fringe contrast recovers, but only weakly.

The lack of shorter baselines entails two disadvantages. First, it makes it difficult to detect and track fringes in real time and to adjust the interferometer's internal optical paths. This is because atmospheric turbulence forces us to detect fringes and readjust optical paths every 20ms. Second, data from long baselines do a poor job of characterizing the larger-scale structure of the target. A better representation of a satellite bus's larger scales requires data from shorter baselines, or in interferometric parlance, sampling smaller u–v spacings, where u and v are the spatial frequencies BEW/λ and BNS/λ sampled toward the target by the east-west and north-south components of the baseline.

Since 2009, NPOI has brought several new array stations into operation, making shorter baselines available. In particular, we now have an 8.8m baseline between stations W4 and AC, which yields resolutions of 2.3–3.5m at geostationary altitude, and a 9.8m baseline between stations AC and E3. These two short baselines share array element AC, making it possible to combine them to make a third baseline, W4–E3, of 18.6m. The ultimate goal is to detect fringes on longer baselines, which give finer details but with worse signal-to-noise ratios. If we detect and track fringes on the two shorter baselines, the third baseline is also correctly phased and can take data without fringes being detectable on it in real time, a concept due originally to Roddier.5 Using three or more array elements also allows us to obtain closure phases, which are the sum of the fringe phases around the triangle of baselines. Because atmospheric perturbations of the baseline phases cancel in the sum,6 these closure phases represent some of the phase information of the image of the target. In particular, they can be used to better determine the relative locations of the components of the satellite.

We obtained fringes from DirecTV-7S on baseline W4–AC on the night of 5 March 2015. But because the combiner software was searching for a second baseline, the data was not recorded. The next night, fringe detection continued to be intermittent due to poor weather, but we were able to detect and record fringes over a period of 27s, during which we tracked the fringe on baseline W4–AC for approximately 4s and the fringe on baseline AC–E3 for a smaller fraction of the time. Our observations were further complicated by the fact that they were done during the last days of the glint season, meaning the glints were shorter and less bright than they would have been at the peak of the season. 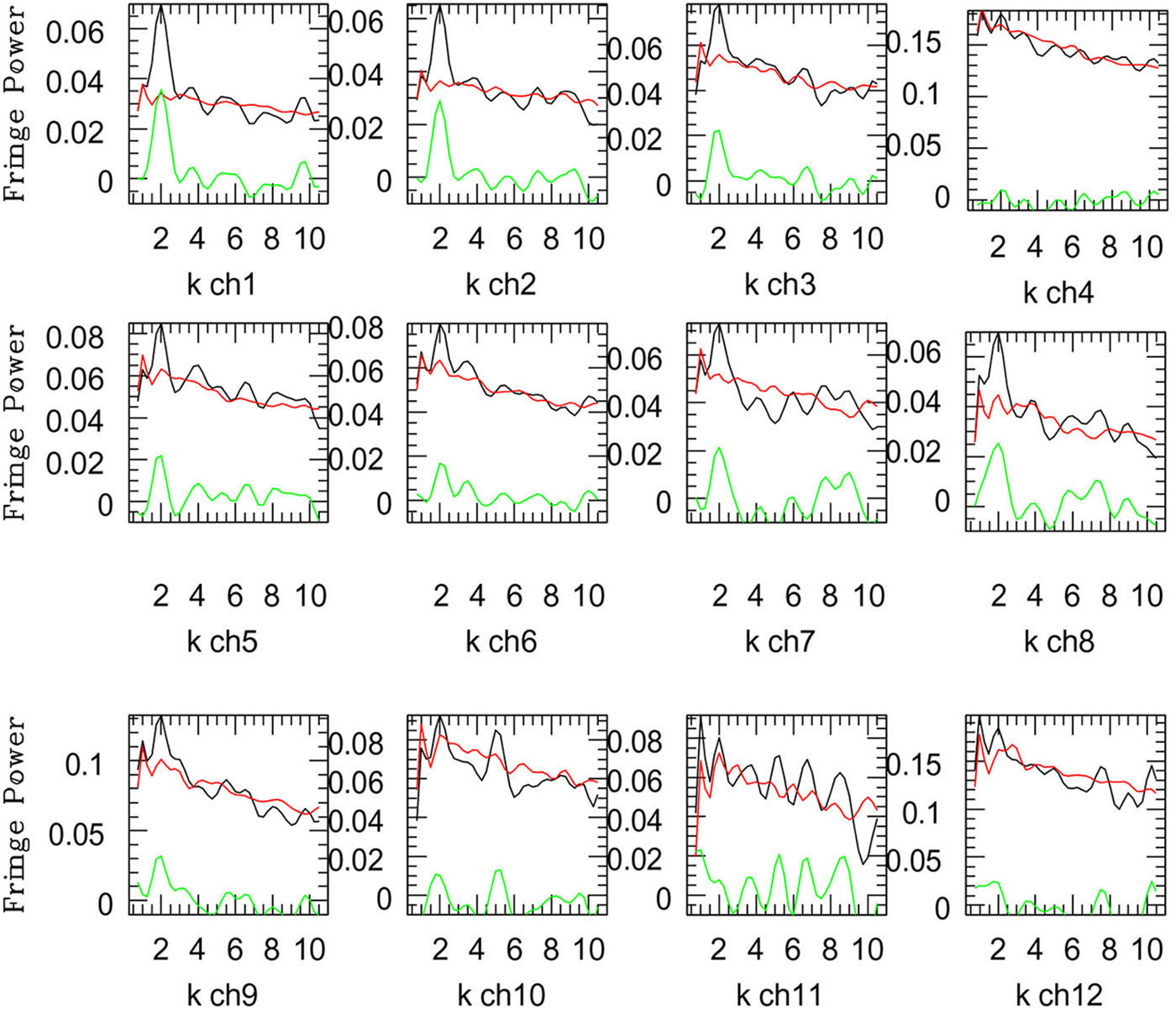 Figure 2. Fringe power as a function of scanning frequency (k) fringes per modulation period in DirecTV-7S spectrometer 2 data from 6 March 2015. Each frame corresponds to a spectral channel, with wavelengths from 845nm (ch1) to 604nm (ch12) This spectrometer observed only the W4–AC baseline, which had a fringe scanning frequency k = 1. The black line shows the power spectrum obtained with the coherent (on-fringe) scan. The red line is the power spectrum bias obtained using an incoherent (off-fringe) scan, scaled based on the flux ratios of the coherent and incoherent scans. The green line is the bias-corrected power spectrum.

This article is an update on our earlier work, which was published elsewhere.7 The next step for NPOI is the commissioning of three 1m telescopes that will increase the instrument's sensitivity, allowing observations during non-glinting periods. We are currently in the preliminary phase of designing the upgraded system.

Sergio Restaino is the branch head of the Radio/IR/Optical Sensors branch in the Remote Sensing Division of the Naval Research Laboratory. His scientific interests lie in high-angular-resolution imaging.