Subcellular resolution, 3D sectioning, deep-tissue penetration in scattering biological tissue, label or label-free structure specificity, and functional imaging can be achieved with multiphoton microscopy (MPM). Since its debut in the modality of two-photon fluorescence microscopy,1 MPM has found applications in neuroscience, embryology, and oncology for visualizing in vivo and ex vivo tissue morphology and physiology. During MPM, a near-IR laser is used to generate multiple excitation photons that are then absorbed to generate a signal photon for image contrast. Both the absorption and scattering of light in the target tissue are important to consider when selecting an appropriate wavelength of light for MPM. This because both of these phenomena lead to the exponential decay of the excitation light during deeper imaging. A reduced decay can therefore enable imaging deeper into the tissue.

In brain imaging, for example, tissue absorption can be approximated as that of water (because the brain is mostly composed of water). For the case of tissue scattering, longer wavelengths cause less scattering. Recent studies show that the combined attenuation caused by absorption and scattering reaches a minimum within an excitation window of 1700nm.2 With 1700nm three-photon microscopy, researchers have successfully imaged the hippocampus of a mouse brain in vivo.2 This achievement would not have been possible using conventional excitation wavelengths of 800 or 1300nm.3 Furthermore, for MPM imaging of deep brain tissue, long working distance, water-immersion objective lenses are commonly used. The long working distance guarantees physical access to deeper regions (about 2–4mm). Water immersion matches the refractive index of the immersion medium and the brain, and offers a relatively high numerical aperture for both excitation and signal collection. Although water absorption is relatively low for the 1700nm excitation, and the immersion thickness is small (about a millimeter), there is still considerable absorption of the excitation light. At 1mm immersion, water absorbs 46% of excitation light, leaving 54% to be delivered to the sample. This corresponds to a signal reduction of 84.3%, which is not acceptable for deep-tissue MPM. A better immersion medium is therefore needed.

Ideally, the immersion medium for MPM should possess a refractive index as close to that of water as possible, with absorption as low as possible. Deuterium oxide (D2O), in which hydrogen atoms in water are replaced by the isotope deuterium, mimics regular water, but has a potentially lower absorption. The use of D2O as the immersion medium in 1700nm deep-tissue imaging experiments has previously been conducted, and produced interesting results.2 It is not possible, however, to declare that D2O immersion is preferable to water immersion, without a quantitative comparison of D2O absorption and its effect on the signal. In our work,4 we have therefore been inspired to investigate the extent to which MPM signals—excited by 1700nm light—can be boosted by using D2O rather than water immersion.

To quantify the difference in MPM signals between the two immersion media, we needed to undertake two tasks. First, we needed to accurately measure the absorption spectrum of D2O in the 1700nm window. From this measurement we could theoretically deduce the signal enhancement in MPM. Second, we needed to perform MPM with both water immersion and D2O immersion, and quantitatively compare the two. We also had to compare experimental and theoretical results based on absorption spectrum measurements.

Although the D2O absorption spectrum had been measured previously, in those measurements there was either a lack of tabulated data for theoretical calculation,5 or some strange ‘kink’ in the results (especially for the 1700nm window).6 We therefore measured the D2O absorption spectrum from 1200–2600nm, which covers the entire deep-tissue MPM excitation windows that have already been demonstrated (i.e., including both 1300 and 1700nm).4 Our results are generally in good agreement with those previously reported, except that there is no kink in the 1700nm window. Furthermore, our results indicate that the absorption coefficient of D2O is 11.7 times smaller than that of water. D2O thus provides a better immersion medium, and potentially generates stronger signals.

Our final verdict was contingent upon a quantitative comparison of MPM signals. We performed second-harmonic generation (SHG), three-photon fluorescence (3PF), and third-harmonic generation (THG) imaging using both D2O and water immersion, with the same excitation power before the objective lens. We predicted that the smaller the absorption of the immersion medium, the more power could be delivered to the focus, and the stronger the MPM signals that could be generated. Indeed, this is exactly what we observed in our experiment (see Figure 1). In all three modalities of MPM, D2O immersion notably boosted signal generation. We found an increase of eight times for SHG imaging, and of 25 times for both 3PF and THG imaging. Our comparison between the experimental results and the theoretical calculations (which were based on absorption measurements) also showed good agreement and suggest that our measured absorption was more accurate. 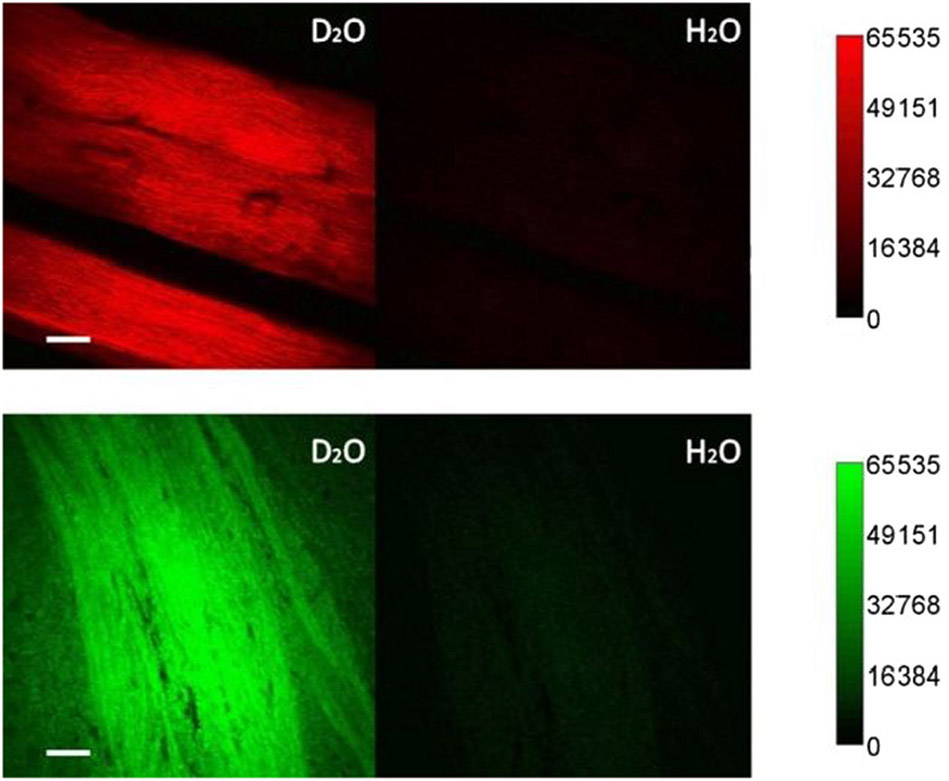 In summary, our absorption characterization of D2O and our comparison of MPM experiments using both D2O and water indicate that D2O immersion is superior for deep-tissue imaging in the 1700nm excitation window. Although D2O is demonstrably better than water for immersion in the 1700nm window, the biggest problem for D2O immersion is hygroscopy (a phenomenon in which D2O absorbs water from the environment and causes MPM signals to reduce over time).4 To avoid this problem we can carefully seal the D2O to protect it from the environment, but this step undoubtedly adds experimental complexity. Currently, we are testing other immersion media in search of easy-to-use solutions that would enable low light absorption and could therefore facilitate deep-tissue MPM in the 1700nm excitation window.

This work is supported by the National Natural Science Foundation of China (61475103) and the National Hi-Tech Research and Development Program of China (2015AA020515).

Ping Qiu is an assistant professor in the College of Physics and Energy. Her research focuses on non-linear and ultrafast fiber optics and multiphoton microscopy (MPM).

Yuxin Wang is a masters student in the College of Optoelectronic Engineering. He is currently developing optical systems for MPM.

Ke Wang is a professor in the College of Optoelectronic Engineering. His research group focuses on developing novel fiber-laser sources for various modalities of MPM. A particular research interest is deep-tissue in vivo MPM in animals.