Management of an animal species, such as the southern hairy-nosed wombat (Lasiorhinus latifrons)—see Figure 1—is a complex issue. Although this animal is the faunal emblem of South Australia, and an iconic species for many in the community, its burrowing can cause significant damage to agricultural properties. As a result, actions to both control and protect wombats are being undertaken simultaneously by different sectors of the community. Unfortunately, knowledge of wombat population dynamics is limited, and thus the overall effects of these actions are poorly understood. Although it is a relatively easy task to count wombat burrows, this activity only sheds light on part of the puzzle. It is also critical to know what goes on underground, so that the numbers of wombats in an area can be estimated accurately. 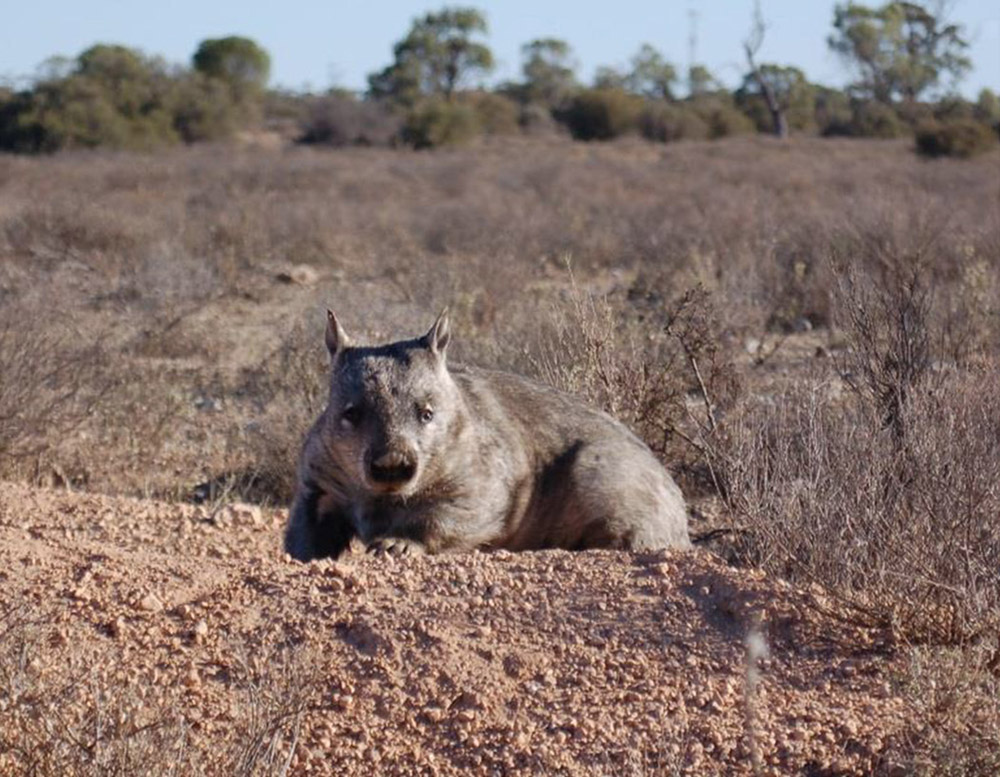 Figure 1. The southern hairy-nosed wombat (Lasiorhinus latifrons) is the faunal emblem of South Australia, but its burrowing habits do not endear it to the farming community.

In most warren studies to date, either the warren has been excavated completely1 or a series of vertical tubes have been inserted through the ground into the tunnels.2 As warrens protect wombats from predators and the impacts of environmental extremes, their destruction can prove fatal to the animals. In addition, modification of warrens through insertion of tubes can affect burrow microclimate. Tubes also cannot be inserted through the thick limestone layers that overtop many wombat warrens. Consequently, these warren types have never previously been investigated.

To overcome and address these issues, we have turned to ground penetrating radar (GPR), a tool that is commonly used in near-surface geophysical research. In GPR, electromagnetic fields are used to detect changes in material properties within the near sub-surface (less than 3m depth). GPR devices are used to measure variations in the radar signal that are caused by changes in the dielectric constant (K) of the soil. The results are displayed as a 2D image of distance along the radar track, versus depth. GPR was first used in the 1960s to survey the topography under ice sheets, and it has since been used for applications such as archeology and forensic investigations. Since the dielectric constant of air-filled voids (with K of 1) is significantly different from that of surrounding soil (K of 4–40, depending on soil type),3 we believed that GPR would be an ideal technique for detecting and mapping the tunnels created by wombats.

In our work, we surveyed four sites—with different soil, land-use, and warren types—in the western regions of South Australia to determine how the underground morphology of the warren was influenced by different environmental conditions.4 To conduct our measurements, we used a Mala X3M radar system, paired with 250 and 500MHz shielded antennas, which was mounted on a rough terrain cart. We established 3D positional data by integrating a Hemisphere 320 RTK differential global positioning system device with the radar system. We also conducted post-survey processing to refine collected 2D radar images and subsequently stitched these together to produce 3D images of the warren tunnels.

In the hardened clay-pan soil of one site we were unable to produce any useful imagery. This is a known limitation of GPR that arises because the signal is severely attenuated by high soil moisture or clay content. At the survey sites that had sandy-loam soil, we found that the warrens contained discrete and/or interlinking linear tunnels. This result was consistent with the findings of previous excavation and vertical tube studies (see Figure 2). 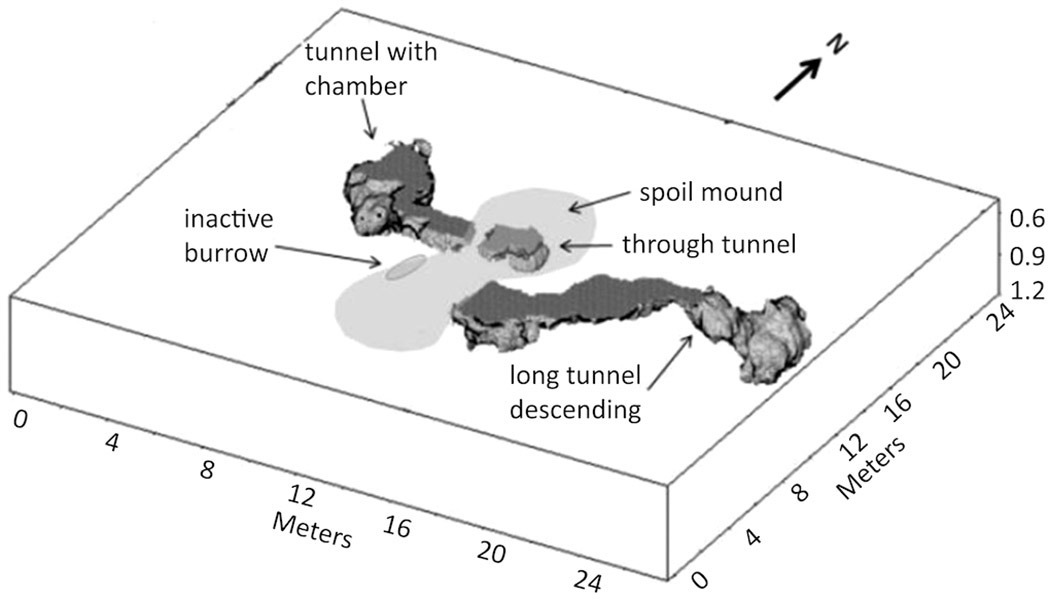 Figure 2. Wombat warrens in sandy soil usually have simple or interlinking tunnels that end in a sleeping chamber. This 3D radar map of one of the survey sites shows two tunnels extending from a small warren.

Our findings from the limestone warrens, however, were a surprise and are forcing us to rethink how we estimate wombat numbers. Our results suggest that in areas that are dominated by calcrete limestone, wombats occupy large open areas between and beneath the layers of limestone, which is in contrast to the linear tunnels they construct in sandy-loam soils. Although it is more difficult to dig in the limestone-dominated areas, once the wombats are able to exploit a crack in the limestone, they tunnel into the more friable soil underneath. This soil often contains natural voids and can be modified by the wombats to suit their needs. In the site we surveyed with the GPR, one detected cavern measured up to 20×5m (see Figure 3) and was occupied simultaneously by at least three wombats (visually observed). This was a particularly significant finding because wombats are generally thought of as solitary animals that rarely occupy burrows at the same time and suggests that there could be more wombats than are currently estimated, especially in areas that are dominated by limestone soils. 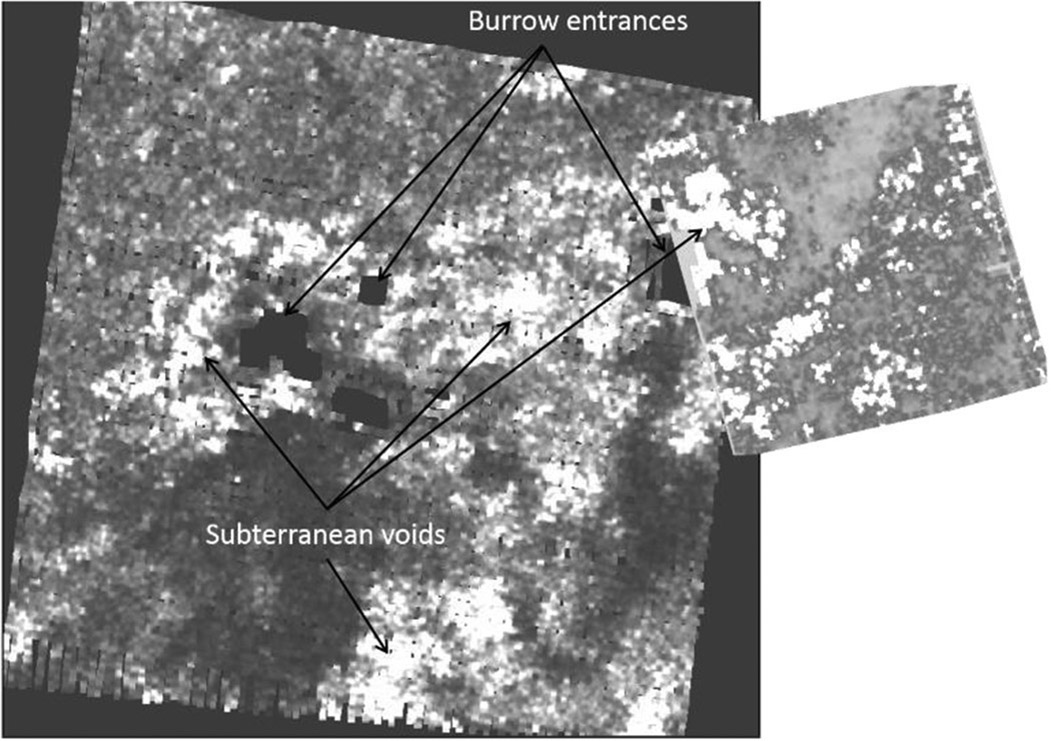 Figure 3. Horizontal slice of ground penetrating radar data, taken at a depth of 0.8m at the limestone warren site. The large square has dimensions of 50×50m. The white areas in the image are subterranean voids inhabited by the wombats.

In summary, we have conducted the first non-invasive wombat warren mapping and the first mapping of a warren under a layer of calcrete limestone. Moreover, our results have confirmed the efficacy of GPR as a viable tool for mapping the subterranean morphology of wombat warrens. We are currently using the results from this study, and other related studies, for the development of a spatial distribution model that will be used to provide the first nationwide estimate of the distribution and abundance of southern hairy-nosed wombats. We hope that this work will lead to more-informed management decisions and better outcomes for both wombats and the wider community.

Michael Swinbourne is a PhD student. He is conducting research into the distribution, abundance, and ecosystem impacts of southern hairy-nosed wombats.