So-called ‘slow light’ is the propagation of a light pulse at a very slow speed (i.e., at a very low group velocity). The deceleration of the light pulse occurs after interacting with the medium through which it propagates. The phenomenon of slow light has attracted much attention since the beginning of the 20th century,1, 2 and in more recent work, it has been shown that the quantum effect of electromagnetically induced transparency allows a remarkable deceleration of group velocity (down to 32m/s).3 Obvious applications of slow light include buffering and processing of optical signals. Slow light, however, also has the potential to considerably increase the spectral resolution of interferometric spectrometers4 and therefore warrants further study.

In general, a large dispersion—which may arise because of absorption or gain resonance—is necessary to make a substantial change to the group velocity.5 In such cases, the refractive index is spatially uniform, but frequency dependent, and the slow light is known as a ‘material slow light.’6 Resonances in different spatial structures (e.g., photonic crystals and fiber Bragg gratings) may result in ‘structural slow light’6 where the optical properties are nonuniform in space. A particularly attractive situation arises when such spatial structures are created in a material by light. It has previously been shown that narrow Bragg resonances of such dynamic holograms can also be used for the deceleration of light pulses.7

In our work,8 we have therefore considered this interesting case. In particular, we consider a situation where two counter-propagating waves (A1 and A2) are pumped into an optical nonlinear medium, as shown in Figure 1. The probe wave (A4)—which is also sent into the medium—gives rise to the back-propagating wave (A3), which is the phase conjugate replica of A4 for pumps with mutually conjugated wavefronts.9 This effect has been reported for various media with different optical nonlinearities and is known as backward-wave four-wave mixing (BWFWM). BWFWM can also be expressed in terms of dynamic holograms. Often, only the transmission grating is recorded (see Figure 1). In such cases, the A1 and A4 waves record the hologram, while the A2 is diffracted from the hologram and produces the A3 wave.

Figure 1. (a) Schematic representation of the back-wave four-wave mixing configuration. Two waves (A1and A4) record a dynamic gating in a nonlinear medium (NLM). The pump wave (A2) diffracts from this grating and gives rise to the back-propagating wave (A3). (b) The temporal envelopes of the probe wave, A4(0), the transmitted, A4(d), and the phase conjugate, A3(0), pulses in the slow light experiments. The pumps (A1 and A2) are continuous waves. t: Time. d: Interaction length along the light propagation direction (z). 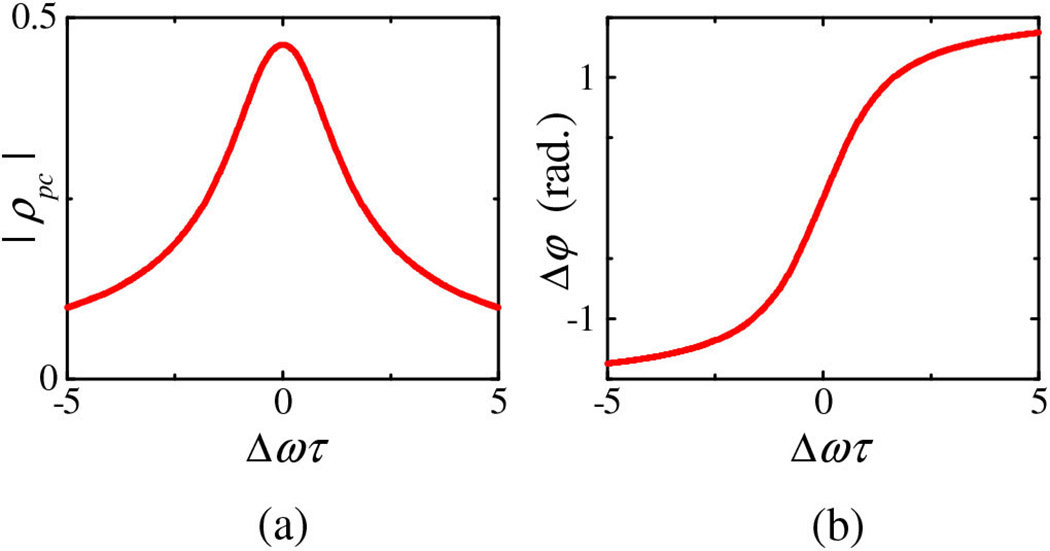 Figure 2. (a) Amplitude of the phase conjugate reflectivity (|ρpc|) and (b) phase shift (Δϕ) for a medium with a nonlocal response and a coupling strength of 1, calculated as a function of the dimensionless frequency detuning (Δωτ) of the probe beam. Δω: Frequency detuning. τ: Response time of the material. rad: Radians.

In our work we have also conducted a series of experiments that confirm this assumption.11–13 In these tests, we used continuous-wave pumps (i.e., A1 and A2), with a wavelength of 514nm, to illuminate a barium titanate crystal (which has a nonlocal response and a coupling strength of 2.8). The probe beam (with a Gaussian temporal profile) was also sent to the crystal, according to the scheme shown in Figure 1(b). We then recorded the temporal dependency of the intensity of the input, transmitted, and phase conjugate pulses.

Our experimental results for an input pulse with a half-width at 1/e2 level of 1.6s are shown in Figure 3. These temporal envelopes clearly illustrate the delay of the transmitted and phase conjugate pulses, and we are able to achieve this kind of delay for media with both local13 and nonlocal11, 12 responses. With an experimental study of the delay for different pump ratios and durations of probe pulses, we have also confirmed existing theory.14 We have also demonstrated that proper selection of nonlinear media and spectral content of the probe pulse (in terms of duration and frequency detuning) allows deceleration—and acceleration—of light pulses.15 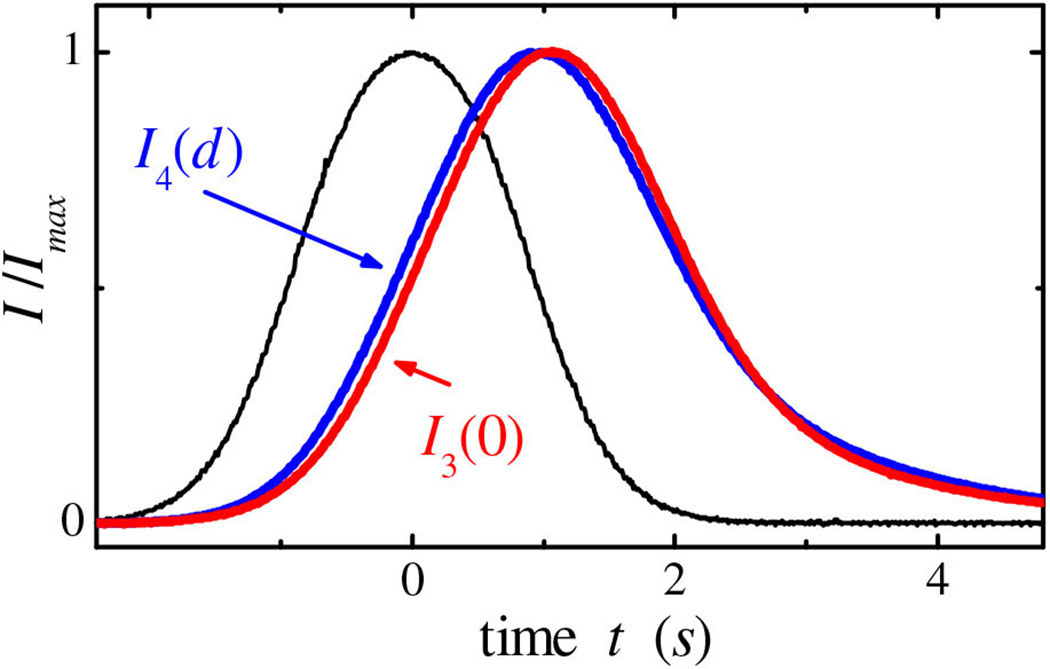 Figure 3. Experimentally measured temporal variation in the intensity (I) of the input (black line), transmitted, I4(d), and phase conjugate, I3(0), pulses. Experiments were conducted on a barium titanate crystal that had a coupling constant of 2.8. Imax: Maximum intensity.

In summary, it is well known that backward-wave four-wave mixing can be realized in a large variety of optical nonlinear materials. The response time of these materials changes from seconds (for photorefractive ferroelectrics) to femtoseconds, or even shorter, for Kerr media. The spectral sensitivity range also changes over a wide (UV–IR) spectral range. Our modeling experiments, with relatively slow ferroelectric crystals that are sensitive over visible light wavelengths, may be translated to all other nonlinear optical materials. We have therefore demonstrated that BWFWM can provide a way to delay light pulses (with a particular duration) at a required wavelength, for a necessary time interval. Our future research will be focused on experimental realization of the acceleration of the phase conjugate pulse, and on simultaneous deceleration and acceleration of the light pulses. This is possible in the BWFWM scheme because of the existence of two different output channels (i.e., the transmitted and conjugate waves).

Konstantin Shcherbin acknowledges a visitor professorship from the University of Burgundy–Franche-Comté.