DNA as a template for liquid crystal displays

Deoxyribonucleic acid (DNA) is one of the world's most abundant naturally occurring molecules. It is easily and cheaply extracted from animals and plants, and its structure and chemistry are well understood. For these reasons DNA is an attractive substance for applications in materials science. For example, the regular 3D helical structure (and resulting molecular grooves) make DNA an ideal templating material for the alignment of other nanomaterials, including liquid crystal (LC) molecules.1–4 For use in LCD devices, LC molecules must be aligned, a process currently achieved using a polyimine template in a time-consuming and energy-intensive procedure. Using DNA, LC molecules can be aligned quickly and easily at ambient temperature. Once aligned, the LCs are highly susceptible to external stimuli such as electric and magnetic fields, which is a significant requirement for controllable optical devices.3 Here, we describe our work on the fabrication of LCD devices using DNA as the templating material.

Initially, the DNA chains themselves need to be aligned. To achieve this, we spread an aqueous solution of double-stranded DNA over a patterned indium tin oxide glass substrate containing in-plane electrodes. The solution was brushed in one direction using a store-bought makeup brush, and the water evaporated. This method produces a thin-film of DNA chains aligned along the brushing direction (nDNA): see Figure 1(a). 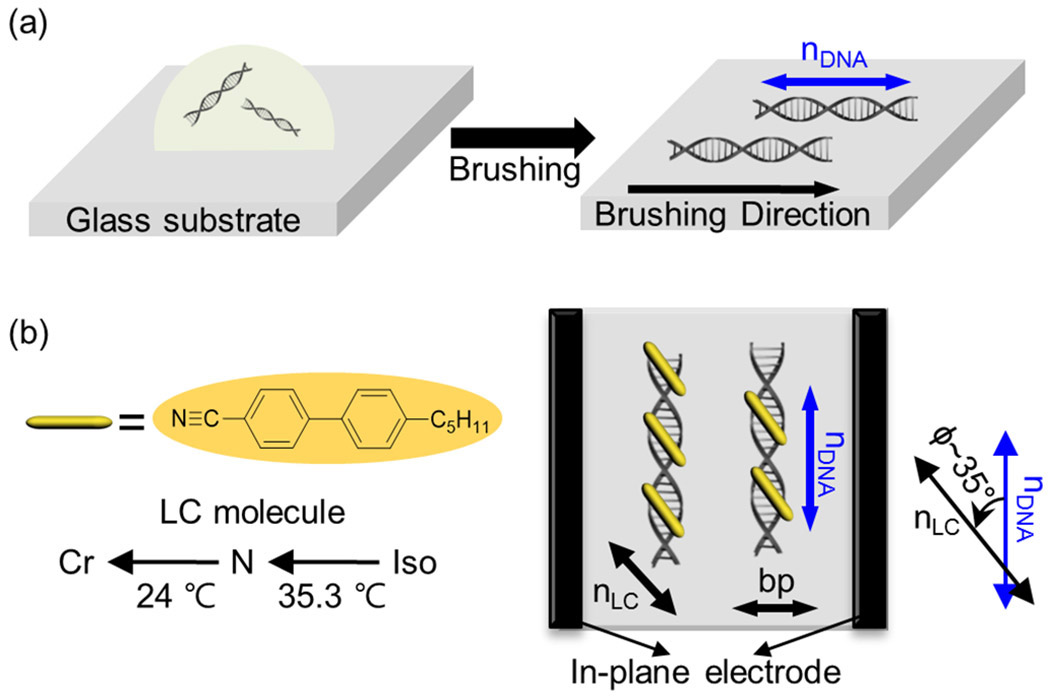 Figure 1. Preparation of a DNA template for the alignment of liquid crystal (LC) molecules. (a) The DNA chains in a droplet of DNA solution are aligned using a brushing method. The chains align parallel to the brushing direction (nDNA). (b) The LC molecules align at an angle of ∼35°to the brush-aligned DNA surface (nLC). Cr: Crystalline phase. N: Nematic LC phase. Iso: Isotropic liquid phase. bp: DNA base pair.

The LC molecules—shown in Figure 1(b)—were heated above the LC phase melting temperature (35.3°C) and introduced to the brush-aligned DNA film as an isotropic liquid. We were then able to analyze the orientation of the LC molecules on the brush-aligned DNA film using polarized optical microscopy. No light was transmitted when the sample was rotated to an angle of 35° to either of the polarizers of the microscope, indicating that the LC molecules possess inclined orientation of ∼35° on the DNA surface with respect to nDNA: see Figure 1(b). This LC orientation is ideal for LCD applications. It has been suggested previously that the LC molecules can span the major and minor grooves of the DNA strands, resulting in the observed inclined orientation.3

On the basis of these results, we were able to fabricate an in-plane switching LCD cell (Figure 2).5,6 This type of LCD is currently the most widely used in industry, as it provides wide-viewing angles, clear images, and stable response times. Without an applied electric field (E), the LC molecules are oriented at an oblique angle to the direction of the electrode. Accordingly, polarized light passing through the LCs is blocked by the top polarizer, giving a dark mode: see Figure 2(a). When an in-plane E is applied, the LC molecules reorient parallel to E, allowing the polarized light to be transmitted through the cell, producing a bright mode: see Figure 2(b). The switch from dark mode to bright mode—shown in Figure 2(c–f)—was observed using polarized optical microscopy with E ranging from 0 to 200V. 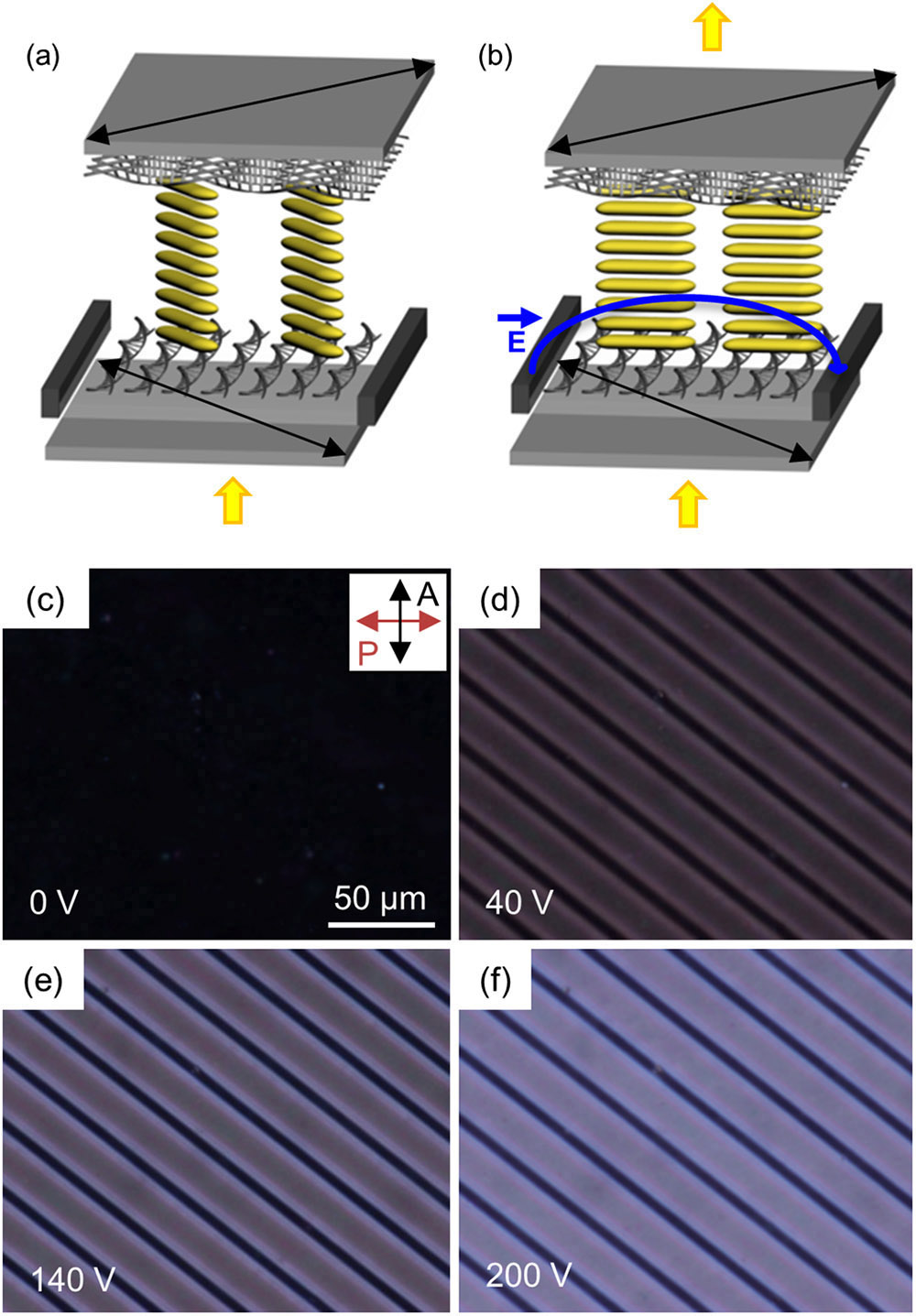 In summary, we have shown that a film of brush-aligned DNA can be used as a template to fabricate an LCD cell, in which the LC molecules align at an oblique angle to the long axis of DNA. This process is fast, simple, and more energy-efficient than the current industry standard, and produces high-quality LCD cells. We believe these results constitute a convenient method for the integration of DNA templates into commercial LCD devices, and pave the way for the use of DNA in various other optical applications, including solar cells and field-effect transistors.

Dong Ki Yoon is an associate professor at GSNT, KAIST. He currently leads the Soft Matter Nano-assembly Group, pioneering patterning applications based on soft matter such as LCs, supramolecules, and polymers.

Yun Jeong Cha is a PhD candidate at GSNT, KAIST. Her research interests are bio-assembly and lyotropic LCs.

Min-Jun Gim is a PhD candidate at GSNT, KAIST. His research interests are chiral soft materials and photonic crystals based on LC materials.

Kyunghwan Oh is a professor in the Department of Physics, Yonsei University. He works in guided wave optics, Fourier optics, and photonic device physics. He is a fellow of The Optical Society of America.