Since the introduction of high-power LEDs, there has been considerable innovation in the automotive lighting industry.1–3 For example, low-beam headlights have historically been achieved with the use of a single lamp as the light source, and with a set of optics—that imaged the light onto the road—to create the cut-off pattern. With the first generation of LEDs, the lamp light sources were replaced, but similar optics were still used. LEDs had the advantage of being much brighter and smaller than the traditional lamps, and the optics therefore became smaller as the luminance (brightness) of the LEDs increased. LEDs are now widely used in both standard and luxury automobiles, and more recent improvements to LED technology means that the devices are beginning to enable new form factors for lighting.

Some of the recent major advances in LED technology include a reduction in the source size, as well as improvements to the luminance and tolerance (the capacity for precise alignment of the optics components, with regard to the light source). These improvements allow new functionalities, such as the advanced dynamic beam (ADB) system. In this system, a light segment can be dynamically switched off to replicate a low-beam. This moveable low-beam then provides a way to detect oncoming and upcoming traffic. The ADB system is possible because of the fast, digitally controlled full-on/full-off switching time of the LEDs.4–9 Multiple functions can also be combined in the new LED technology. For example, LEDs can act as daytime running lights that facilitate vehicle visibility during the day. Furthermore, by increasing the power levels, and by turning on additional LEDs, it is possible to provide low-and high-beam light from the same module.

In this work, we discuss our recent advances in LED headlight and rear-lighting technology for automotives. We combine matrix modules (matrix arrays of individually addressable LEDs) with optical components to produce responsive ADB lighting. We also show how chip-scale packaged LEDs that are based on wafer-level packaging can be used to achieve the low form factors and tolerances needed to meet optical and thermal performance requirements.10

We achieve adaptive beam functions through the use of matrix modules. These modules include a matrix board of LEDs, pre-collimating optics, as well as a projection lens or reflective mirrors. For the light source, we require high luminance, a sharp contrast in luminance distribution, and accurately positioned LEDs on the board. The alignment between the board and collimating optic (in the z-direction) is critical, and this tolerance (which includes the LED, solder, board accuracy, optic accuracy, and board/optic alignment) needs to be less than 50μm to avoid significant light loss. Using our chip-scale packages (which are 1.2 × 1.2mm or 1.5 × 1.5mm in size), it is possible to attach the chips directly onto the board. We can keep this solder pad tolerance to ±25μm, and the total tolerance to below 50μm.11 Our package enables flexibility in LED board spacing down to 500μm in all directions (i.e., top, bottom, left, and right). The same 50μm die spacing, however, can also be achieved by using chip-on-board technology with post-attachment optical isolation by side-coating (attaching a bare die to the circuit board and then filling the gaps with a reflective material that eliminates the optical crosstalk) to create custom matrix solutions.

We can also use high-brightness LEDs to create lines of light and—with the right lens or reflector-based optical design—thus enable both lighting of the roadway with a headlight, and daytime running light functionality, within the same form factor. By increasing the luminance directly, we reduce the size of the optics and the headlights, which saves space and weight. For instance, a luminance of 80Mcd/m2 at 45% efficiency, which produces 29,000cd, requires a 54×40mm projection lens. We can reduce the dimensions of the lens to 47×16mm by using a luminance of 200Mcd/m2 with the same efficiency and flux (see Figure 1). Similar benefits are obtained with reflector-based designs. We have so-far demonstrated LED luminances of up to 200Mcd/m2, and we are currently developing sources that will be capable of 300Mcd/m2 or more. 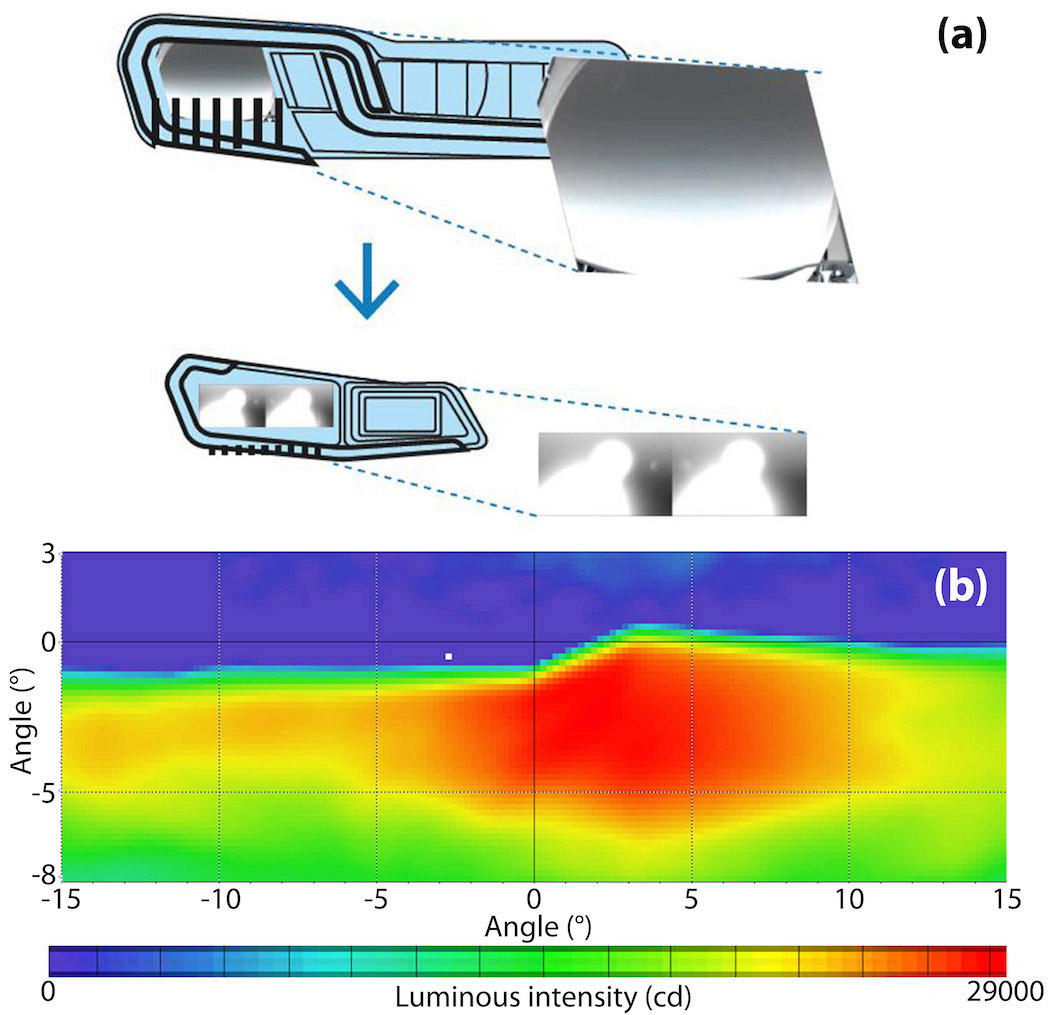 Figure 1. Simulations of the potential reduction in size of a low-beam optic automotive lighting system. (a) Schematic diagram of a current headlamp model (top) and a smaller proposed model (bottom). By using a light source with an increased luminance (i.e., from 80Mcd/m2at the current level to 200Mcd/m2 at the proposed level), the lens surface (grayscale insets) can be reduced in size from 54×40mm to 47×16mm. (b) The luminous intensity distribution of the smaller model, on a logarithmic scale.

For rear lighting, chip-on-leadframe technology allows the production of LED bulb replacements and innovative light engines (light sources that include LEDs, a primary lens, a printed circuit board or leadframe, and other electronic components).12 As with our headlighting endeavors, we are now integrating LEDs and associated components into bulbs for rear-lighting. These new bulbs, which incorporate leadframe technology, have standard optical, electrical, and mechanical interfaces, and can therefore easily be replaced.12, 13 Although the stylish headlights that first became popular in luxury vehicles use high-power LEDs, our 3D rear combination lamp/optics systems, which are currently in the prototype stage, incorporate mid-power LEDs on leadframes with integrated mixing chambers to create homogeneous light strips. This innovation has a huge potential to enable organic-LED (OLED)-like designs for high-volume segments that use more robust and lower-cost LED-based solutions. Similar LED bulbs will soon become available for fog lights and indicators. Developers of luxury vehicles are currently rolling out the first generation of OLED-based rear lighting, but the cost is prohibitive for mainstream vehicles. As an alternative, we may use strips of LEDs on flex boards. These offer 3D flexibility for the creation of innovative lighting designs that do not require additional heatsinks or secondary optics. We expect this flexible LED-on-leadframe approach to replace LEDs on boards for rear-lighting in the near future.

In summary, we anticipate accelerated penetration of LEDs in exterior automobile lighting in the coming decade. These innovations are the result of ongoing improvements in LED miniaturization and efficiency, and of reductions in the cost of devices. Features such as advanced dynamic beams—which have become standard on luxury vehicles—are likely to soon become a standard part of mainstream vehicles. New, highly flexible, and pixelated LEDs (e.g., the LUXEON Neo) can be used to further enhance ADB matrix functionality through very tight tolerances (rotational and in the x, y, and z directions). Improvements in LED luminance are also set to reduce optical and headlight dimensions for further design flexibility. We are now working with our partners to bring the first high-tolerance, 1 and 0.5mm2, high-luminance LED products to the market in vehicles in 2017. We also plan to extend this technology to other light functions (e.g., for fog lights and signaling).