Diabetes is unquestionably one of the most serious epidemics facing society. In the United States alone, 29.1 million people suffer from the disease, and it is the seventh leading cause of death. In addition, it is suspected that diabetes-related deaths are significantly under-reported by as much as a factor of two.1 Furthermore, the total cost of managing diabetes is estimated at $245 billion in the United States.1 This value neglects the pain and suffering that patients endure through constant blood glucose testing. It has been well documented that the harmful effects of diabetes can be largely mitigated by insulin treatments.2 To accurately and safely provide these treatments, it is necessary to monitor blood glucose levels continuously.3 Current monitoring techniques that rely on ‘finger stick’ methods cannot provide continuous monitoring, and they suffer from patient non-compliance issues because of their invasiveness. It has thus been a long-standing goal of science to develop a non-invasive and pain-free technique to monitor blood glucose levels in diabetic patients.

Glucose is a chiral molecule, and the overwhelming majority of glucose molecules that occur in nature are of the D-isomer (having dextrorotary optical characteristics). As a result, glucose exhibits a difference in the absorption of right-hand circular and left-hand circular light. This phenomenon is known as circular dichroism.4 Circular dichroism exhibited by vibrational energy levels is known as vibrational circular dichroism (to distinguish it from circular dichroism on electronic transitions). There have been extensive studies on the vibrational circular dichroism of glucose on the fundamental vibrational transitions. These studies have focused on the spectral ranges 900–1200,5, 6 1175–1575,7 and 2750–3050cm−1.8 These results, however, are of little interest for noninvasive glucose detection because of the strong absorption of water in these spectral regions, which severely limits the penetration depth. To overcome this critical limitation, it is necessary to move towards overtone absorption transitions (where absorption occurs at a higher than normal excited vibrational state).9, 10 Another significant advantage of working in this spectral region is the availability of a much larger selection of affordable and reliable sources and detectors, making the possibility of a commercially viable device more realistic. Additionally, the near-IR includes multiple biological windows that offer the best penetration depth in tissue.

We have achieved the detection of glucose using overtone vibrational chiral dichroism.11 Our method has the potential to separate the presence of glucose from its surroundings (thus avoiding the ‘calibration problem’) while circumventing the huge absorption of water in the fundamental vibrational region of the spectrum. This enables clinically relevant penetration depths in biological tissue. Furthermore, the polarization of light is preserved through tens of scattering events,12 which provides the ability to penetrate reasonably deep into tissue, even in the presence of large amounts of scattering.

We used the experimental setup shown in Figure 1 to measure the overtone circular dichroism (Δ∊) of glucose, which can be calculated as: 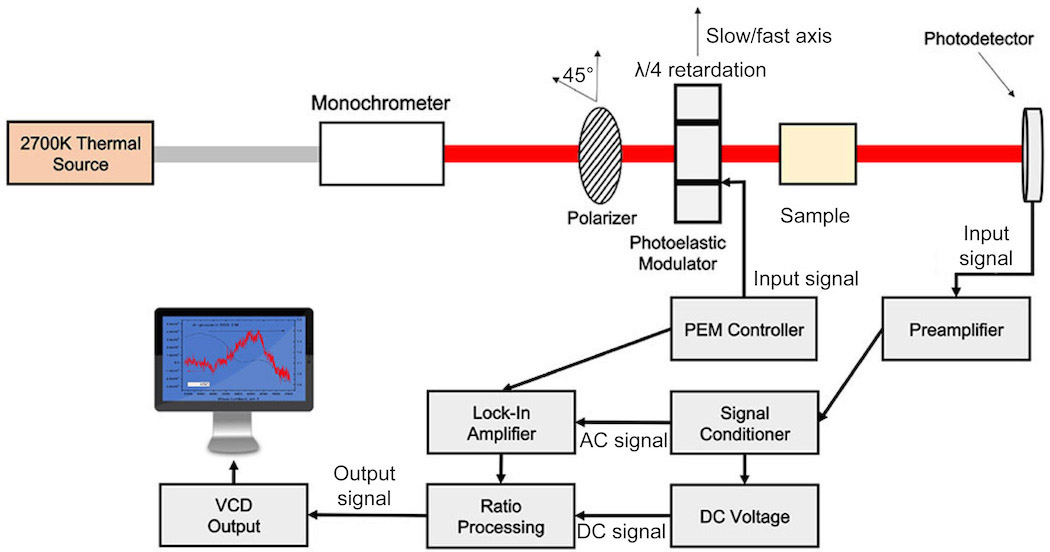 To provide a tunable source of radiation at about 1200nm, we used a thermal source (a stabilized tungsten lamp) and a scanning monochromator to select a narrowband part of the spectrum. This radiation passed through a polarizer oriented at 45° with respect to the photoelastic modulator. We used the latter to continuously modulate the beam's polarization between left- and right-circular polarized light. The detector, which was placed behind a cell containing glucose solution, was used to measure the transmitted signal. By modulating the incident polarization at a certain frequency, and by detecting the signal at this frequency, we could recover the difference in absorption for left- and right-polarized light using a lock-in detection and characterize it as a function of wavelength.

The overtone vibrational dichroism spectrum of (+)-D glucose (dextrorotary glucose), from 1.1–1.3μm is shown in Figure 2. This spectrum is the difference in absorption for left- and right-circular polarization of light, as a function of incident wavelength. Since this absorption spectrum is measured around the overtone absorption of the glucose molecule, it contains chemical information about the molecule. The fact that this signal is only present for a chiral molecule such as glucose, permits additional discrimination against other more abundant molecules (e.g., water). 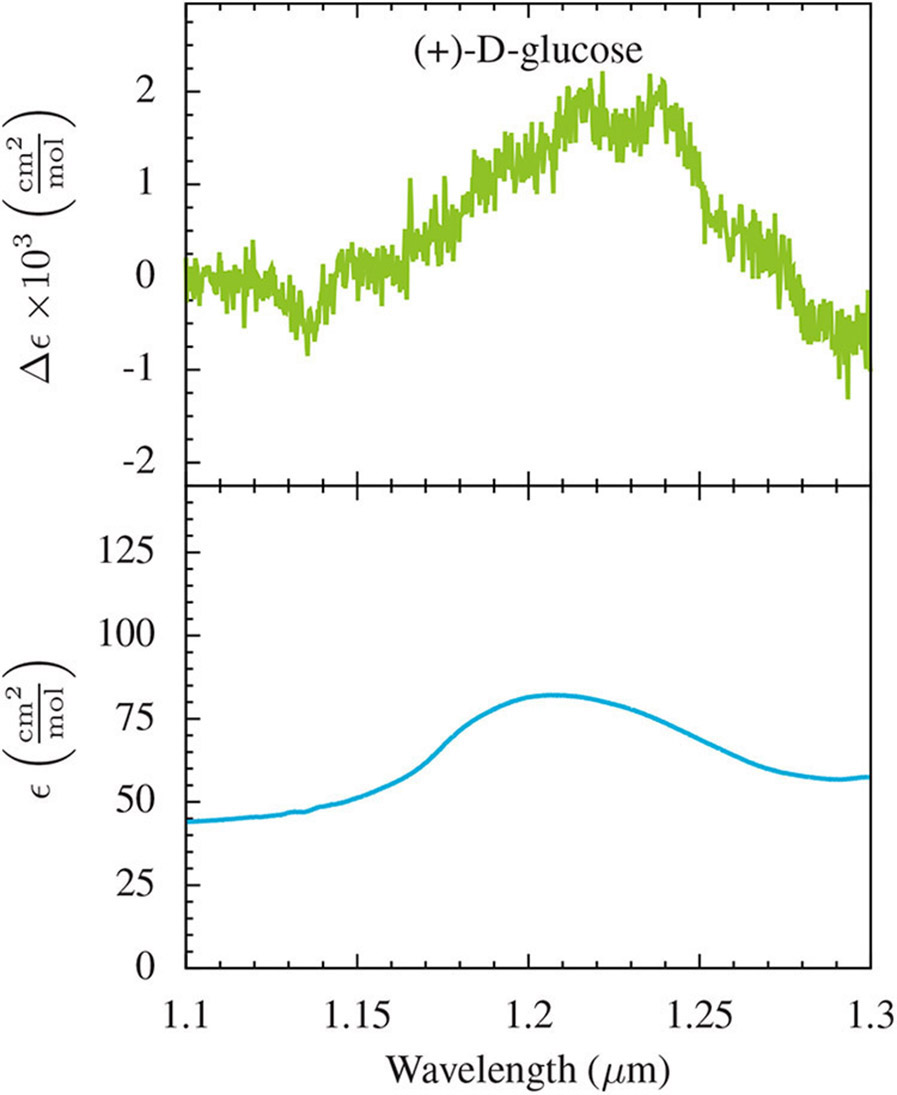 In summary, we have detected glucose using overtone vibrational chiral dichroism. This technique could be used at significant depths in biological tissue. Although an accurate, non-invasive glucose sensor has yet to be developed, the increased chemical specificity and potential penetration depth of vibrational circular dichroism in the near-IR regime makes our approach a viable candidate that warrants significant further study. We have used our technique to demonstrate the vibrational circular dichroism spectrum for the second carbon–hydrogen stretch overtone of glucose. In the future, we plan to extend this work to scattering media using photoacoustic detection. This will enable us to localize the blood vessel from which we can take measurements in vivo. We have recently developed the technology to achieve such accurate photoacoustic measurements,13 and can use these in combination with our current studies for truly non-invasive glucose sensing.

Vladislav Yakovlev obtained a BS, MS, and PhD from Moscow State University between 1987 and 1990. Since 2011 he has been a professor in the Departments of Biomedical Engineering and of Physics and Astronomy. He is a Fellow of SPIE, the Optical Society, the American Physical Society, and the American Institute for Medical and Biological Engineering.