The butterfly proboscis as a fiber-based, self-cleaning microfluidic system

The butterfly proboscis is a unique, naturally engineered device for acquiring liquid food, and may inspire novel developments in micro- and nanofluidic engineering.
21 April 2016
Kostya Kornev and Peter H. Adler

More than one quarter of fluid-feeding insects are butterflies and moths in the order Lepidoptera. Over millions of years, Lepidoptera diversified and evolved a unique feeding device: the proboscis.1 These insects use their proboscises opportunistically to acquire liquid food, as viscous as honey or as inviscid as water, from sources as diverse as nectar and animal wastes. In the ‘ Lilliput’ world in which the Lepidoptera live, capillary forces are dominant: they can either enhance or prevent development and diversification of insects on the evolutionary time scale. We have conducted 10 years of research in which we have revealed an amazing connection between the scale, form, and functionality of Lepidopteran feeding devices and their coupling through capillarity.

The proboscis consists of two C-shaped fibers, the galeae, united to form a food canal. By first approximation, the food canal is a circular cylinder, although externally the proboscis is not necessarily circular (see Figure 1). Conventionally, the proboscis has been compared functionally to a drinking straw, with a suction pump in the insect head.2 However, the proboscis is actually far from a straw. Lepidoptera must acquire fluids while keeping the proboscis clean,3 which is enabled by hydrophobic compounds and roughness that decrease surface energy in waxed hydrophobic patches and increase it in protein-rich hydrophilic patches.4, 5 The complex shape of the proboscis, together with patterned external and internal surfaces of the galeae, and the presence of a porous and fibrillar hierarchical structure used for fluid uptake, all suggest that capillary action also has played a significant, yet unexplored, role in diversification of Lepidopteran feeding strategies. 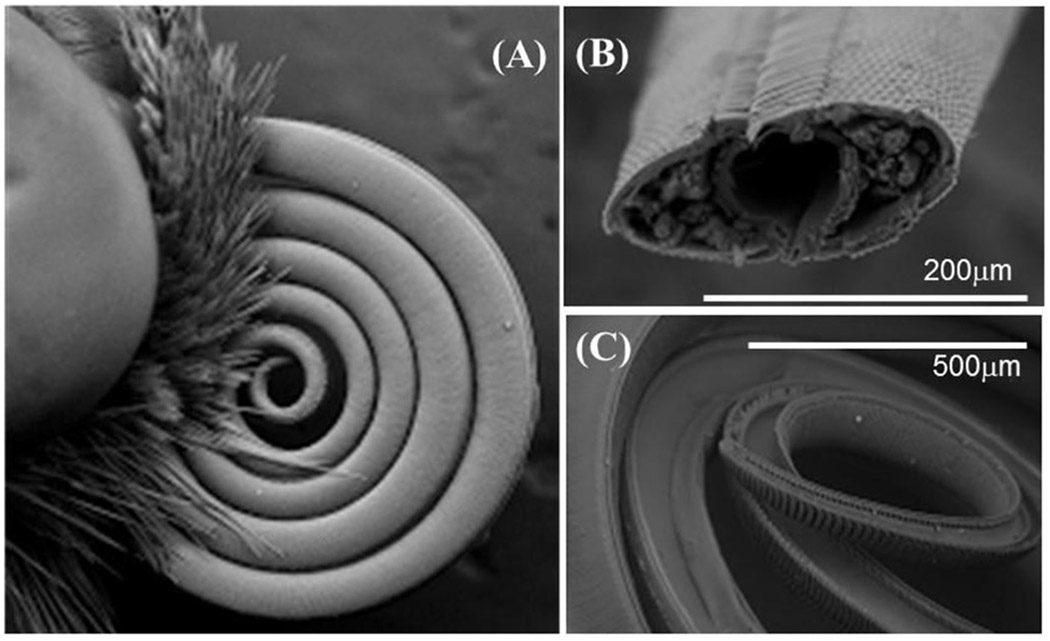 Figure 1. Photomicrographs of butterfly proboscises. (A) The coiled proboscis of a swallowtail butterfly. (B) Cross section of the proboscis of a monarch butterfly, showing the circular food canal formed by two galeae. The top and bottom fence-like structures (legulae) link the galeae together. (C) A single galea of the monarch butterfly, which resembles a C-type fiber. (Images courtesy of C. E. Beard.)

Materials properties of insect feeding devices evolved to accommodate the feeding niche of the insect by shaping the proboscis and elaborating it with a particular physico-chemical pattern. Lepidoptera often drink from porous substrates, such as wet soil or rotting fruit, while restricting entry of debris.1 They also acquire nectar from films and droplets, as well as pools. To accomplish these tasks, Lepidoptera evolved structural attributes of the proboscis, including a mechanism linking the two galeae: see Figure 1(B). The fence-like linkage consists of adjacent projections—legulae—historically regarded as sealed1 until recent experiments showed that water can enter the food canal through gaps between the legulae.3, 6–8 Experimental analyses revealed a wetting dichotomy of the proboscis surface: a hydrophilic drinking region (5–20% of the proboscis) and a hydrophobic non-drinking region.3, 9 Using capillary rise experiments, we quantitatively specified the regions of the proboscis with different wetting properties and their demarcation as the position where the air/water interface remains horizontal.10 These observations allowed us to subdivide the proboscis into two functional regions: a drinking region where water is attracted to the surface; and a non-drinking region where water is repelled from the surface. The legulae are hydrophilic. Ellipticity of the proboscis cross section—see Figure 1(B)—ensures that liquid is collected at the legulae. Capillary pressure in the liquid films left on the proboscis after its removal from the food source (e.g., flower nectar) squeezes the liquid from the curved sides toward the legulae fences.

Some materials solutions to fluid uptake by the proboscis can be used in the design of probes to deal with small amounts of liquids.11–13 Such probes would need to contain two types of pores: nanometer-level pores that would provide a strong capillary driving force for liquid uptake; and micrometer-level transport pores that would provide an efficient pathway for the liquid to move sufficiently quickly into the analytical device. Yarns made of nanofibers or nanotubes are good examples of materials that would meet these requirements.

We have also shown that by sliding the galeae over one another,14 or bending and unbending the proboscis, Lepidoptera can control fluid collection by changing the capillary pressure in the interlegulae gaps6 or in liquid films on the external and internal surfaces of the proboscis. Lepidoptera are able to drink continuous liquid columns or break up the liquid column and drink bubble trains, significantly decreasing fluid resistance and therefore using the suction pump effectively.6, 14

To summarize, the evolutionary development of Lepidoptera feeding devices (in terms of systems biology and pure materials) has accommodated capillary forces to provide a robust structure that suits the order's organismal function.15 The dual functionality of the proboscis at a compositional and organismal levels has enabled opportunistic feeding from a wide variety of food sources. These features could be used to develop micro- and nanofluidic engineering devices with built-in sensors and actuators. Our future work embraces biomechanics and biomaterials features that would support self-assembly of Lepidopteran feeding devices and efficient fluid sampling and transport. Our first activity would respond to the demanding applications of probe designs. The second activity responds to the biological challenges of understanding insect diversification and evolution by looking at the materials science basis using quantitative measures.

Kostya Kornev graduated from Kazan State University in Russia in 1988, and worked at the Institute for Problems in Mechanics, Russian Academy of Sciences (1990–2000), and the Textile Research Institute in Princeton, NJ (2000–2006). Since 2006, he has been a professor in the Department of Materials Science and Engineering, where he studies nanomaterials.

Peter H. Adler earned a doctoral degree at Pennsylvania State University and completed a postdoctorate at the University of Alberta, Canada. He is professor of entomology, and has a particular interest in structure-function relationships and genetics of insects.