Non-diffracting Bessel vortex beams exhibit diverse propagation regimes in glass that can be observed with a novel imaging strategy.
25 May 2016
François Courvoisier and Arnaud Couairon

High-power femtosecond pulses have become a key tool in processing of transparent materials (e.g., glass and sapphire) for the present and the next generation of consumer electronics.1 Associated major industrial challenges include high-quality and high-speed cutting of screen glass for smartphones, camera windows, or drilling of through-vias (vertical interconnect access) in interposers for the circuitry of 3D electronic chips. Ultrafast laser pulses (on picosecond or femtosecond timescales) allow for structuring transparent materials with high levels of accuracy. When the laser pulses propagate into the transparent dielectrics, they usually undergo high distortions.2 These distortions arise because of the nonlinear Kerr self-focusing effect and because of the interaction of the pulse with the plasma, which the pulses generate in the material. The propagation is therefore highly nonlinear and prevents uniform energy deposition along the beam propagation. In contrast, a propagation solution that is compatible with plasma generation—and thereby laser energy deposition in a focal region with a tubular shape—is required to drill through-vias in one (or a few) laser shots.

In previous work, our groups have shown that it is possible to use ‘Bessel beams’ to uniformly deposit energy along a line focus and to use a single laser pulse to drill nanochannels in dielectrics of high aspect ratio.3 This approach opens up many perspectives, but it is limited to drill channels of about 1μm in diameter, i.e., well below the needs of the microelectronics sector (10–50μm). In addition, ‘Bessel vortex’ beams (vortex-like nonlinear Bessel beams that carry angular momentum) have been used to generate tubular plasmas in gas.4 These beams focus the input pulse in the shape of a long cylinder surrounded by several lobes.5 A remaining question, however, is whether this type of beam structure is stable up to ablation-level intensities in solid dielectrics.

In our more recent work, we have therefore sought propagation solutions in terms of Bessel vortex beams. Gaussian beams that carry a vortex usually split into several hot spots as they propagate in the nonlinear regime (because of azimuthal modulation instability). We have thus studied—analytically and numerically—the existence of propagation-invariant vortex beams in a Kerr medium with nonlinear absorption. We have also predicted the existence of propagation-invariant solutions, in the form of Bessel vortex beams.6, 7

The results of our analytical and numerical investigations indicate, interestingly, that the intensity profile of a Bessel vortex beam—even when subject to the Kerr effect and high nonlinear absorption—is very similar to that of linear high-order Bessel beams. Indeed, the Bessel vortex beam intensity profile is characterized by weak localization of light, with a ring-shaped main lobe surrounded by a large low-intensity tail. Propagation invariance comes from the conical structure of the beam. Light constantly refills the main lobe with energy, which compensates for the nonlinear losses. Importantly, we found families of solutions for a broad range of parameters in terms of intensity, cone angle of the Bessel beam, and vortex charge. This is very different than for solitons, which are strongly localized solutions that exist only in the absence of losses and for specific parameter values. Highly nonlinear absorption therefore plays a key role in the existence, and stability, of Bessel vortex beams.

Experimental characterization of the Bessel vortex beams is challenging because of their nonlinearity. It is difficult to image the beam at a propagation distance while avoiding the distortions that occur along that distance. One solution is based on the use of a medium with variable size (e.g., a syringe cuvette filled with water). In this way, the exit face of the medium can be imaged, and it is possible to follow the evolution of the pulse along the propagation direction by changing the length of nonlinear propagation.8 This solution, however, is not tractable for solids such as glass. We have therefore developed a new strategy that is based on careful translation of the beam within the sample and across the exit side, as well as simultaneous imaging of the light distribution at the exit side. Linear propagation in air—from the sample exit face to the detector—permits imaging and faithful 3D reconstruction of the beam profile within the sample, with a direct and quantitative comparison to numerical simulations.9

We have used our 3D imaging technique to make observations at low focusing angles. The results indicate that the Bessel vortex beam crossed several regimes while the pulse energy was increased. These regimes included a propagation-invariant regime, a rotating regime (where the main intensity ring splits into several hot spots that rotate, following the sign of the vortex), and a ‘speckle-like’ regime (where multiple hot spots appear and disappear in the beam).9 At higher focusing angles (e.g., 6.8°) we observed that the propagation-invariant regime was preserved, even up to energy levels well above the energy threshold for damage in fused silica (see Figure 1). In this case, the nonlinear dynamics of the beam were drastically reduced. This is highly beneficial for applications in materials processing.9, 10 A typical example of the energy density for such conditions (experimental and numerical data) is shown in Figure 2. The computed plasma density (i.e., a hollow tube of plasma that can be created in a single shot) is also illustrated. In addition, we have demonstrated single-shot processing of tubular structures in glass, which has been reported by other groups.11 After generation of the tubular plasma, material excitation is followed by a cylindrical explosion—see Figure 2(e)—which yields cylindrical damage that guides light through its center.

Figure 1. Illustration of Bessel vortex beam propagation. For a pulse energy of 5μJ, a femtosecond pulse—shaped as a Bessel vortex—is propagation-invariant. There is excellent quantitative agreement between the simulation and experimental results. 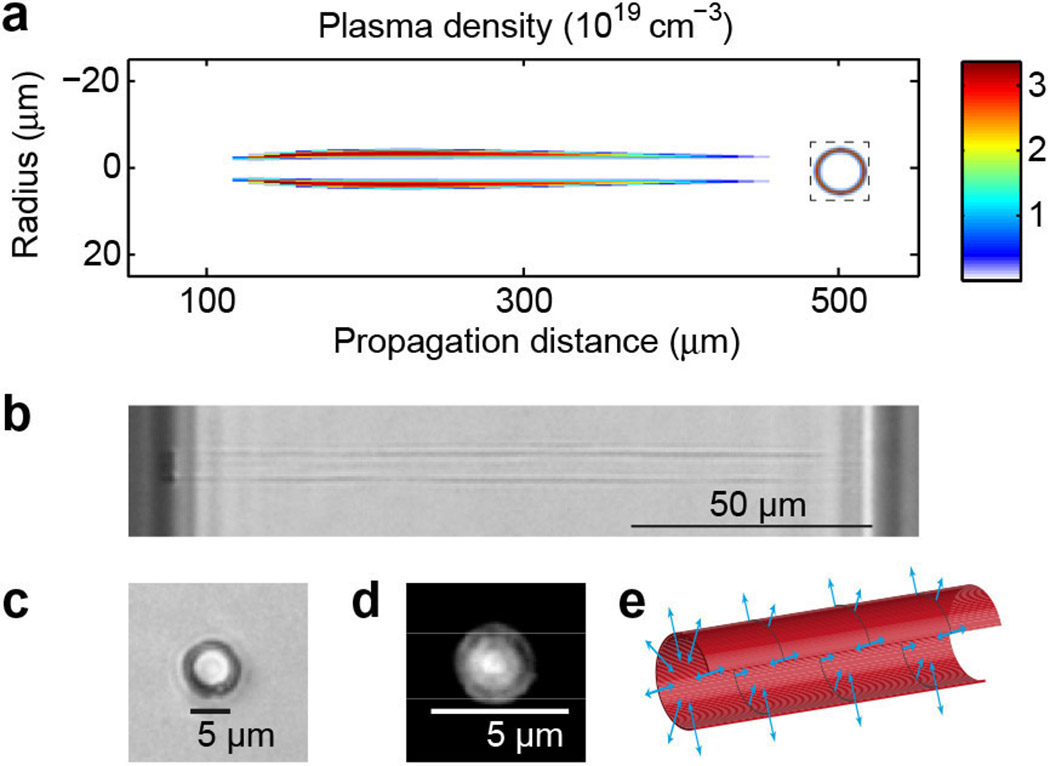 Figure 2. (a) Tubular plasma generated in the propagation-invariant regime that is illustrated in Figure 1. Inset shows the cross section of the plasma distribution at a distance of 300μm in units of 1019cm-3. (b) Transmission optical microscopy image of tubular damage produced in glass by a single-shot, high-energy, stationary Bessel vortex pulse (with energy of 35μJ and pulse duration of 1ps). The damage extends from one sample side to the other. (c) Transverse section of the damage, observed under the same conditions as for (b), but with a pulse energy of 20μJ. The bright central region shows a high-index modification of the tubular region's core. Remarkably, no light from the laser pulse crossed this volume. (d) Image of the near-field output-guided light (at an input wavelength of 632nm) in the structure shown in (c). (e) Schematic view of the propagation direction of mechanical and thermal waves that expand outward and inward (arrows) from the excited tubular sheet volume (circles).9

In summary, we have demonstrated a novel approach for the generation and characterization of nonlinear laser propagation (i.e., filamentation) in transparent solids. We have reported propagation-invariant solutions in Kerr media that allow high-energy density deposition by ionization. Our work thus opens up new approaches for the control of laser materials processing in the majority of transparent materials.12 In our continuing research we are aiming to reach extreme densities of material excitation.

François Courvoisier is a former student of the École Normale Supérieure de Cachan, France, and received his PhD (on ultrafast spectroscopy of aerosols) from the University of Lyon, France, in 2005. He conducted postdoctoral research within the Applied Physics Group of the University of Geneva, Switzerland, in 2006 and is now a researcher at CNRS. His research interests include ultrafast laser–matter interactions, laser materials processing, and nonlinear optics.

Arnaud Couairon is an alumnus of the École Normale Supérieure in Paris, France, and he received his PhD from École Polytechnique in 1997. He is currently a research director at CNRS. His research interests include laser–matter interactions, ultrafast and nonlinear optics, filamentation and its applications, plasma physics, and fluid dynamics.