Understanding the brain—both its function and its dysfunction—begins with a map. This starting point is a goal of the Brain Research through Advancing Innovative Neurotechnologies (BRAIN) Initiative in the United States and the European Union's Human Brain Project.1 Their aim is to obtain a complete picture of the human brain's connectome and thus reveal the interconnections of its billions of neurons. This will permit observation of the actions of a single neuron and the interactions of many, which ultimately give rise to our thoughts and actions. In the past, a number of strategies have been used to image action potentials (the electrical impulses that signal the ‘firing’ of a neuron), but these tend to be either highly invasive with limited throughput or to be toxic. For instance, patch clamp and electrode arrays both require direct contact with neurons, whereas voltage-sensitive dyes are highly toxic and degrade quickly.2,3

Quantum dots (QDs) are one of the newest materials that have been proposed for the task of imaging action potentials. QDs are nanoscale semiconductors with photophysical properties that include size-dependent photoluminescence. The recent introduction of QDs into biological imaging, facilitated by the ability to functionalize their surfaces with biological molecules, stems from their broad absorption spectra, bright emission, and physical and photophysical robustness.4 In addition, they are small enough to be incorporated into a cellular membrane,5 have low toxicity,6 and possess an intrinsic sensitivity to surrounding electric fields.7 By applying QDs to imaging neuronal action potentials, it may therefore be possible to overcome several key limitations associated with current brain imaging techniques and thus achieve the detail and resolution necessary to truly map and understand brain function.

When QDs are subjected to an electric field, they exhibit a red-shift in their emission maximum, a broadening of their emission profile, and a decrease in their photoluminescence (PL). Collectively, these phenomena are referred to as the quantum confined Stark effect (QCSE).7 QCSE is often studied under cryogenic conditions and on single QDs. Cellular imaging applications, however, require measurements for ensemble populations at ambient temperatures. We were interested in ascertaining whether we could observe QCSE in electric fields comparable to those experienced across a neuronal cell membrane and whether those changes would take place quickly enough to track an action potential (a phenomenon that occurs on a millisecond timescale).8, 9

To investigate these effects, we needed to apply an electric field to QDs while insulating them from the introduction of exogenous charge, which is known to have its own effect on the photoluminescence of QDs.10 We approached this challenge by isolating QDs in polymethylmethacrylate between two dielectric layers of silica that were in turn sandwiched between two electrodes. Applying a potential across the device created a field over the QDs, which were then photoexcited. We monitored the emission of the QDs with a photomultiplier tube to obtain integrated PL or with a CCD to examine spectrally resolved data.

Using this methodology we observed effects consistent with QCSE, i.e., red-shifting and broadening of the spectra coupled with a drop in PL intensity (see Figure 1). We noted with some surprise, however, that the PL suppression exceeded the level predicted by QCSE. Further investigation, using time-resolved spectroscopy, revealed changes in decay profiles that point to ionization as the mechanism for the enhancement of PL quenching in the electric field.8 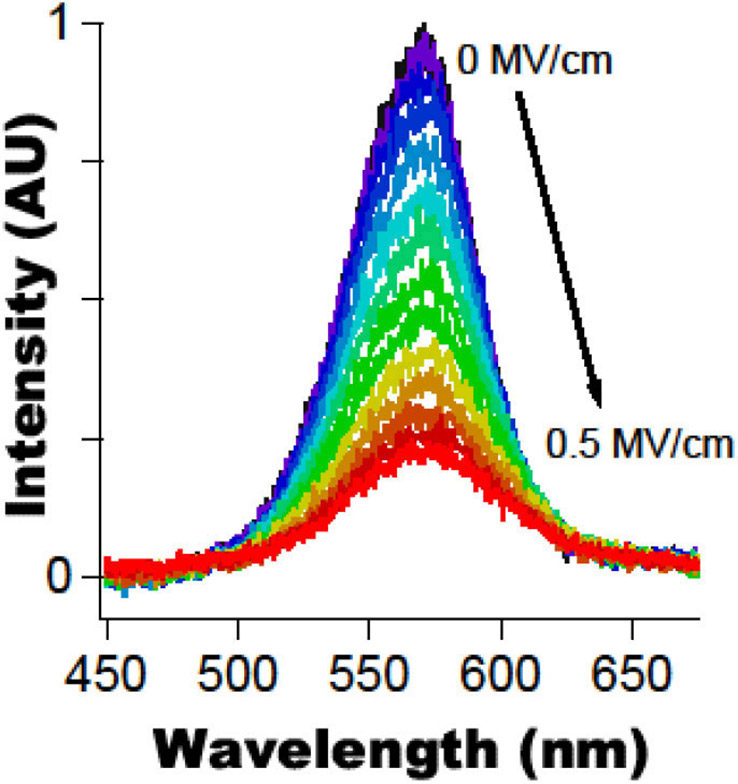 Figure 1. Quantum dots that are subjected to an electric field exhibit a decrease in photoluminescence (PL) intensity coupled with a red-shift and broadening of the spectral profile. AU: Arbitrary units.

Once we had established that it was possible to observe QCSE in an ensemble population at ambient temperatures and that we were, in fact, observing larger PL suppression effects than anticipated, it was necessary to ascertain whether the QDs would actually be useful in imaging action potentials (i.e., if the changes in PL were sufficient to detect the relatively small electric fields that exist across a neuronal cell membrane). Using a voltage measured in a murine neuron and applying that as a field—assuming a 5nm membrane measured between the phospholipid heads—to the device, we found that QDs exhibited a measurable response to the field change and that the rapidity of their response allowed real-time measurements (see Figure 2). 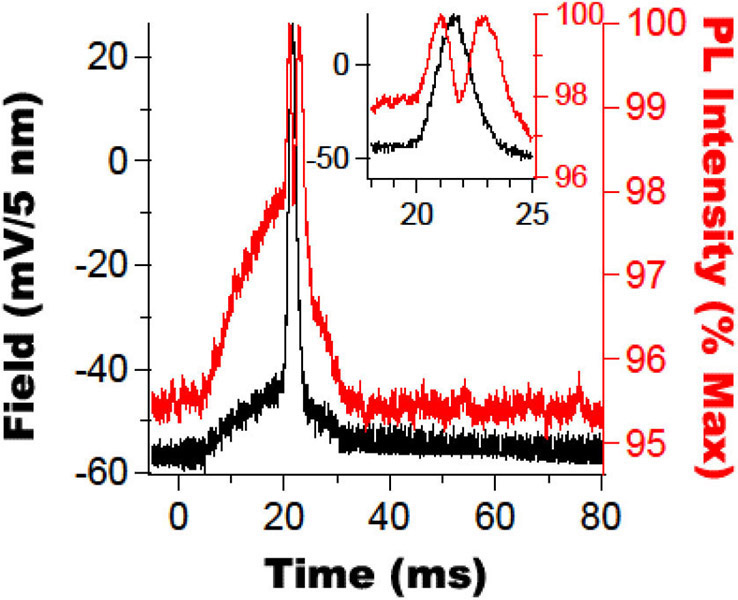 Figure 2. Integrated PL intensity (red) tracks in real time with the application of an electric field (black) that has the same magnitude as observed in a neuronal action potential. At non-zero fields, the PL is suppressed. At a zero field, however, the PL is maximized.

Imaging the human brain with the resolution necessary to develop a true map will require new materials that are small enough to be integrated into a cell membrane and that exhibit a measurable change in their PL with sufficiently rapid response to ‘see’ an action potential. In this work we have demonstrated initial success in using quantum dots at such real action potentials and timescales. As we continue to work on this project, we are experimenting with QDs of different sizes and compositions to optimize field-induced PL suppression. Moreover, QDs possess other properties (e.g., large two-photon cross sections and the ability to serve as excellent donors in energy transfer systems) that could prove to be even more promising as the system is expanded into lipid bilayers and eventually to single neurons and neural networks.

Clare Rowland is a National Research Council postdoctoral research associate. She obtained her PhD in chemistry in 2014 from Northwestern University as a National Science Foundation graduate research fellow.

James Delehanty is a research biologist. He obtained his PhD in molecular and cellular biology from Tulane University Health Science Center. His research is focused on the interfacing of nanomaterials with biological systems to achieve novel capabilities.