Biosensors are analytical devices that convert a biological response into an electrical signal. The biological response is generated when an immobilized biorecognition element (e.g., DNA, protein, or whole cells) detects an analyte. A coupled transducer then translates this response into an electrical signal.1 The development and commercial success of biosensors has so far been hindered by the lack of a low-cost technique for the fabrication of devices that are capable of reliably detecting low concentrations of an analyte. The difficulty in developing such a technique arises as a result of the complex surface functionalization that is required for probe immobilization. This functionalization can involve many stages and increases the cost of production. Additionally, current fabrication techniques often produce a sub-optimal probe-surface density, which decreases the limit of detection (LoD) of the sensor and reduces its reproducibility.2

A number of techniques have achieved a low LoD or more reproducible measurements. However, these methods have been analyte, platform, and signal-transduction specific. These approaches also tend to be tailored for a particular sensor or sensor type.3 Few of these methods take into consideration the need for multiplexed analyte detection, which would enable several different analytes to be tested for using a single sample.

We have developed a method that can be applied to any type of surface or functionalization layer to achieve direct immobilization of a specified thickness of probe material on the surface, irrespective of the application. Our approach uses direct high-resolution maskless printing of the biorecognition element onto the surfaces of the biosensor. This is achieved using a novel technique called laser-induced forward transfer (LIFT), which can be used to deposit several aptamers onto the same substrate, thereby creating biosensors that are capable of multiple-analyte detection.

The LIFT technique uses a pulsed laser beam that is projected onto a donor substrate carrying the material to be transferred. The pulsed beam creates a rapid and localized temperature increase at the interface between the donor and the material, resulting in a high-pressure vapor pocket. In the case of liquid materials, this leads to a high-speed jet that drives the liquid from the donor substrate to a receiver substrate. A droplet of the liquid material is printed onto the receiving surface for each laser beam pulse. By using computer-controlled translation stages to alter the relative positions of the donor and receiver substrates, microarrays of a desired material can be formed. The diameter and thickness of the printed droplets can be tuned by adjusting the applied laser energy fluence,4 the width of the projected laser beam, the distance of the donor receiving substrate, and the viscosity of the material. We have also developed the LIFT technique for direct laser-based printing of solid materials. We have successfully printed a wide variety of molecules onto completely unmodified screen-printed electrodes, ranging from thylakoids5 to DNA enzymes.6 Additionally, we have used this technique to print onto silane-modified sensors, and have demonstrated that biorecognition elements can be deposited on even supra-hydrophobic surfaces by exploiting the high-impact pressure that arises from the collision of the jets on solid substrates.7 These examples highlight the generality of our technique, which can be applied irrespective of the molecule being deposited and the type of the surface onto which deposition is achieved.

We have also developed a method to optimize the response of the biosensor by quantifying the density of the probe material deposited onto its surface and the amount of analyte that is bound to the probe. Our method employs a short, fluorescently tagged oligonucleotide strand that is complementary to the immobilized oligonucleotide probe molecule. The intensity of the fluorescent signal is therefore dependent upon the number of probe molecules on the surface. Upon recognition of the analyte, the immobilized probe strand changes shape, thereby displacing the short complementary strand and leading to a decrease in the recorded fluorescent signal. Our technique—which can be extended to numerous DNA, RNA, or aptamer-based sensors—allows for the quantification of any analyte, irrespective of whether it can be fluorescently tagged. This is because recognition of the analyte results in a decrease to the fluorescent signal, which can be recorded with a fluorescent microscope and processed with relevant software (we used ImageJ). An enhancement of the LoD can be achieved by optimizing the amount of deposited aptamer required to detect a range of analyte concentrations, thus increasing the sensitivity of the biosensor.

Our copper biosensor was printed using the LIFT technique and optimized using our complementary-strand method: see Figure 1. The biorecognition element of the sensor is formed of DNA enzymes, in which one of the (enzyme) strands catalyzes the breaking of its complementary (substrate) stand upon analyte detection.8 We LIFT-printed well-shaped round micropatterns of the DNA enzymes onto silane-functionalized silicon-nitride surfaces. The printing was carried out by projecting the beam of a neodymium-doped yttrium-aluminum-garnet laser (with a 355nm wavelength, 10ns pulse duration, and projected area of 50μm2) onto the donor substrate. We tested two energy fluences of 300 and 450mJ/cm2, which resulted in patterns of 150- and 230μm-diameter DNA enzyme arrays, respectively. The thiol-modified aptamers are able to bind covalently to the epoxy-bearing silane on the surfaces. Following optimization of the concentrations of both strands, we were able to achieve copper detection at concentrations down to 1μM. To characterize the cross reactivity and the specificity of our sensors, we deposited aptamers for the detection of aflatoxin M1 and copper on different sites. We also tested the specificity against other divalent cations (i.e., lead and magnesium). 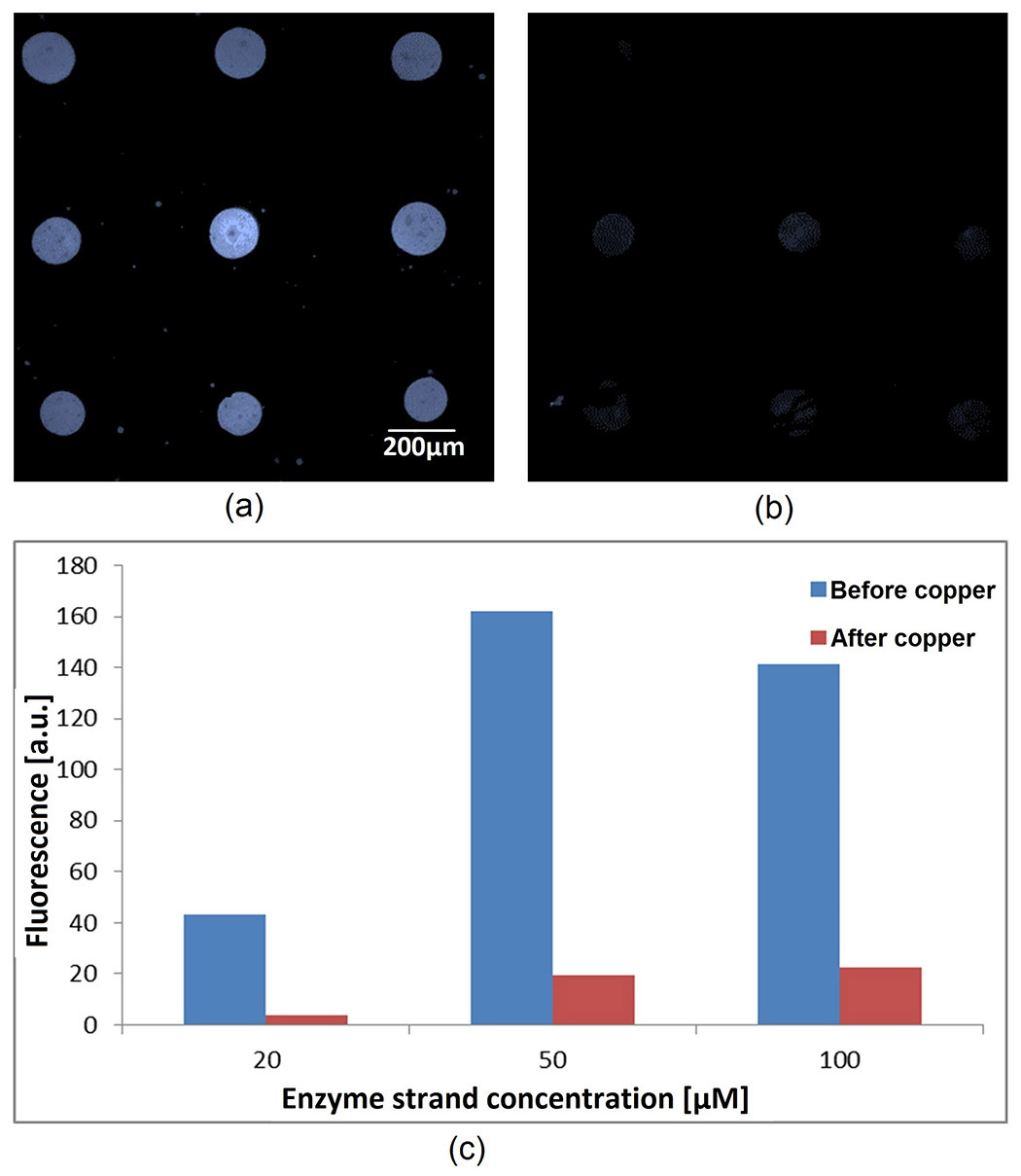 Figure 1. The fluorescence of aptamer spots (deposited using laser-induced forward transfer) following hybridization with 10μM of the complementary strand (a) before and (b) after exposure to copper (200μM). (c) The fluorescence intensity recorded before and after exposure to copper ions for three different concentrations (20, 50, and 100μM) of immobilized aptamers (enzyme strands). a.u.: Arbitrary units.

We have developed biosensors using a novel laser-based technique. By introducing multiplexing and achieving a low LoD, our work successfully overcomes several issues encountered in the fabrication of biosensors. In the future, we would like to further build upon our existing knowledge of this fabrication method and enhance the spatial resolution that we can achieve with LIFT. We also intend to further decrease the LoD by optimizing our technique for surface functionalization, as well as increasing the surface density of our immobilized probes.

The work was supported by the European Commission through the project ICT-BIOFOS (contract number 61528).

George Tsekenis is a postdoctoral researcher. His main research interests include surface functionalization and biomolecule modification for sensor applications, drug delivery, and bio-electronics.

Maria Massaouti is a research associate. Her current research is focused on laser printing for the development of sensors and research into light-matter interaction.

Ioannis Theodorakos is a PhD student and his research focuses on the laser printing and processing of inorganic and organic materials for application in solar cells, biosensors, and electronics applications.

Ioanna Zergioti is an associate professor and her main research activities are related to laser printing, patterning, and sintering for organic electronics and sensor applications, as well as laser-matter interaction studies.