Light-responsive chiral nanomaterials are attractive for their applications as metamaterials, in hyperbolic geometry, as high-sensitivity bioanalysis agents, and as catalysts for asymmetric reactions. Nanocarbons belong to the family of light-responsive materials that includes fullerenes (spheres), carbon nanotubes (pillars), and graphene (sheets). Several studies have sought to introduce chirality to these materials, or to produce separate chiral configurations. Compared with some semiconductor inorganic nanoparticles (e.g., cadmium telluride), these materials are expected to be less toxic and thus may be considered as strong candidates for bioapplications.

The synthetic methods for imparting chirality, however, are not transferable from one structure to another, and for the past decade, the goal of achieving chiral nanocarbons based on graphene has proved elusive. For example, methods that are suitable for the synthesis of chiral fullerenes cannot be extended to the preparation of enantiopure carbon nanotubes (those that have only one chiral geometry) because the growth of the graphene network requires a temperature in the range of several hundred degrees celsius, at which traditional asymmetric catalysts cannot survive. Another problem lies in the inherent geometry of the flat graphene sheet. In contrast with some fullerenes and nanotubes, with potential asymmetric arrangement of carbon atoms, flat graphene does not have defect-free, surface-configurational chiral symmetry (see Figure 1).

In our work, we have thus focused on exploiting conformational flexibility as the key element to introduce chiral geometry into a nanocarbon structure. In our technique, we cut a nano-sized graphene quantum dot (GQD) from a flat sheet of graphene. This allows us to tune the wavelength of light that interacts with the material by quantum confinement of electrons or holes. With this size-control of the graphene sheet, we make the material similar to both noble metal and semiconductor nanostructures. We are able to attach chiral ligands to the free edge of the GQD, and these ligands control the conformation of the graphene sheet.

We achieved helical buckling (twisting) of the GQDs through covalent attachment of moieties of the amino acid L/D-cysteine to their edges (L/D-GQDs). This gave rise to chiroptical activity, as a result of chiral interactions at the ‘crowded’ edges.1 We detected the chiroptical response in circular dichroism (CD) spectra as bands at about 210–220 and 250–265nm, with inverted signs for opposite handedness of the cysteine edge ligands. The chiroptical peaks at 210–220nm correspond to the hybridized molecular orbitals of the chiral amino acids and atoms of the graphene edges. We obtained various experimental and modeling information, including density functional theory calculations of CD spectra with probabilistic distributions of GQD isomers. These results indicate that the band at 250–265nm originates from the 3D twisting of the graphene sheet (see Figure 2). This can be attributed to the chiral excitonic transitions. 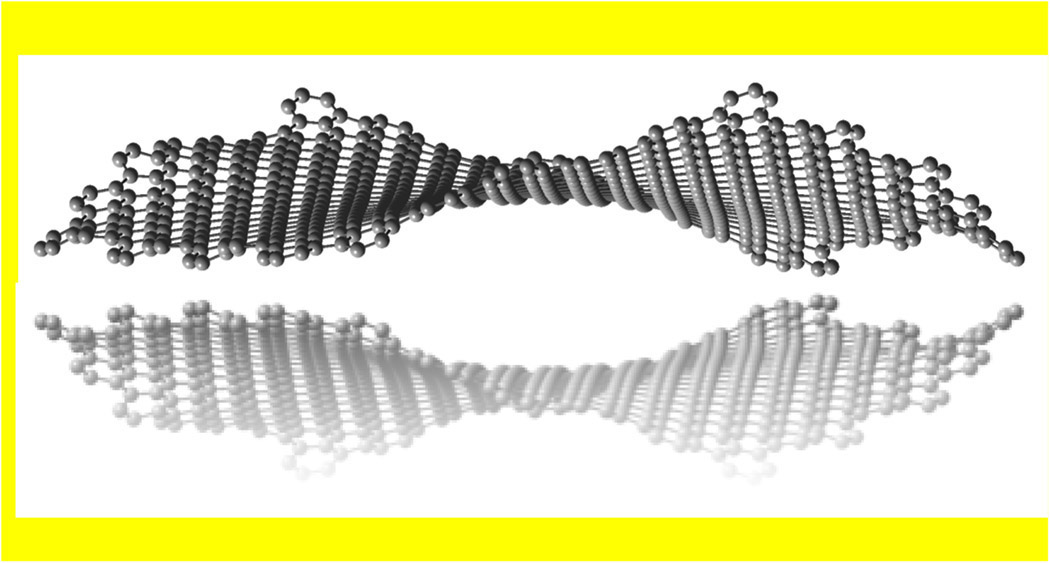 We carried out a biocompatibility test of the L/D-GQDs by exposing them to Hep G2 (human liver cancer) cells. The results revealed the L/D-GQDs' general biocompatibility, as well as a noticeable difference in the toxicity of the stereoisomers (those with the same molecular formula, but with different atom orientations), where the D-GQD was slightly more toxic. Our molecular dynamics simulations demonstrated that D-GQDs have a stronger tendency to accumulate within the cellular membranes than L-GQDs. The emergence of such nanoscale chirality in GQDs that are decorated with biomolecules is expected to be a general stereochemical phenomenon for a variety of flexible sheets of nanomaterials.

In summary, chiral nanocarbons are attractive materials for use as bioanalysis agents, drug delivery systems, and chiral catalysts. Compared with other nanocarbons, flat graphene sheets do not have the inherent chiral configuration required for chiroptical activity, and manipulation of their conformation is necessary. We have fabricated chiral graphenes by cutting out nano-sized GQDs and attaching chiral ligands to their edges, which induces a twist. The biocompatibility of chiral GQDs paves the way for their use in the development of photo-responsible drug delivery vehicles and more selective phototherapies. In addition, the twisted electronic states can lead to polarization-based optoelectronic devices and (photo)catalysts. In our future work we will focus on exploring these possibilities.

This work was supported by the Center for Photonic and Multiscale Nanomaterials, which is funded by the National Science Foundation (NSF) Materials Research Science and Engineering Center program DMR 1120923. Other support came from the NSF projects 1403777, 1411014, 463474, the Japan Society for the Promotion of Science (KAKENHI 2510001), and the US Department of Energy Basic Energy Sciences (DE-SC0002619). The authors also thank the University of Michigan's Electron Microbeam Analysis Laboratory for its assistance with electron microscopy, and acknowledge the NSF for funding the JEOL 2010F analytical electron microscope used in this work.

Nicholas Kotov is the Joseph and Florence Cejka Professor of Engineering. His research has led to the discovery of self-organization of nanoparticles, biomimetic layer-by-layer assembled nacre-like composites, and chiral nanostructures. He has authored more than 300 peer-reviewed publications, holds 20 patents, and has founded five start-up companies.