One of the major goals in neuroscience is to image the structure of the brain at cellular resolution. However, achieving deep brain tissue imaging has posed a significant challenge because of technical limitations in accessing wavelengths beyond 950nm. Recently, the availability of new technologies, such as suitable near-infrared (NIR) detectors and femtosecond laser sources, offer great potential for deep brain imaging. Now, we have discovered a ‘ golden window’ that uses NIR light at wavelengths of 1600–1870nm, which offers the optimal transmittance for deep brain imaging.1, 2

The brain is a unique tissue, made up of a massive network of neural cells. It contains mostly water, and has twice as much lipid, and less than half the protein of muscle tissue. All these components make brain imaging a challenge. Although the widely used technique of magnetic resonance imaging (MRI) is not limited by depth, it can only image brain tissue at the millimeter scale. Optical imaging is still the only applicable method to study neural tissues with resolution at the micrometer or sub-micrometer scale.

When a light pulse propagates in tissue media it divides into separate components: ballistic, snake, and diffusive.3, 4 Traditional multiphoton microscopy enables deep-tissue imaging by using only the ballistic component of light to excite fluorescence at the visible wavelength. However, when using visible light for brain imaging, the penetration depth is limited by the high degree of light scattering (which blurs images) and absorption (which reduces the number of available photons) in the tissue.

The application of NIR at wavelengths 650–950nm (optical window I) reduces the absorption and scattering, and increases the penetration depth. Using new tools, such as NIR femtosecond lasers and photodetectors that are based on indium gallium arsenide or indium antimonide, and using longer wavelengths (up to 2400nm) in the NIR region, we can achieve greater imaging depth.

We studied the imaging depth at NIR wavelengths ranging from 600 to 2500nm by measuring the transmission in rat brain tissue.1, 2 Figure 1 shows the experimental measurements in brain tissue with different thicknesses (50–200μm). We found that optical window III (1600–1870nm) had better imaging depth than windows I, II (1100–1350nm), and IV (centered at 2200nm). In window III we observed the maximum transmittance (the percentage of light that passes through the tissue) and the minimum absorbance (percentage of light absorbed in the tissue). Although previous studies5–8 have reported the potential of deep light penetration in window III, they did not examine the underlying theory or compare window III with window IV. On general grounds, we may expect longer wavelengths to have greater imaging depth, but our experimental study and more careful theoretical analysis show that window III is superior to window IV. Hence we refer to window III as the ‘golden window.’ 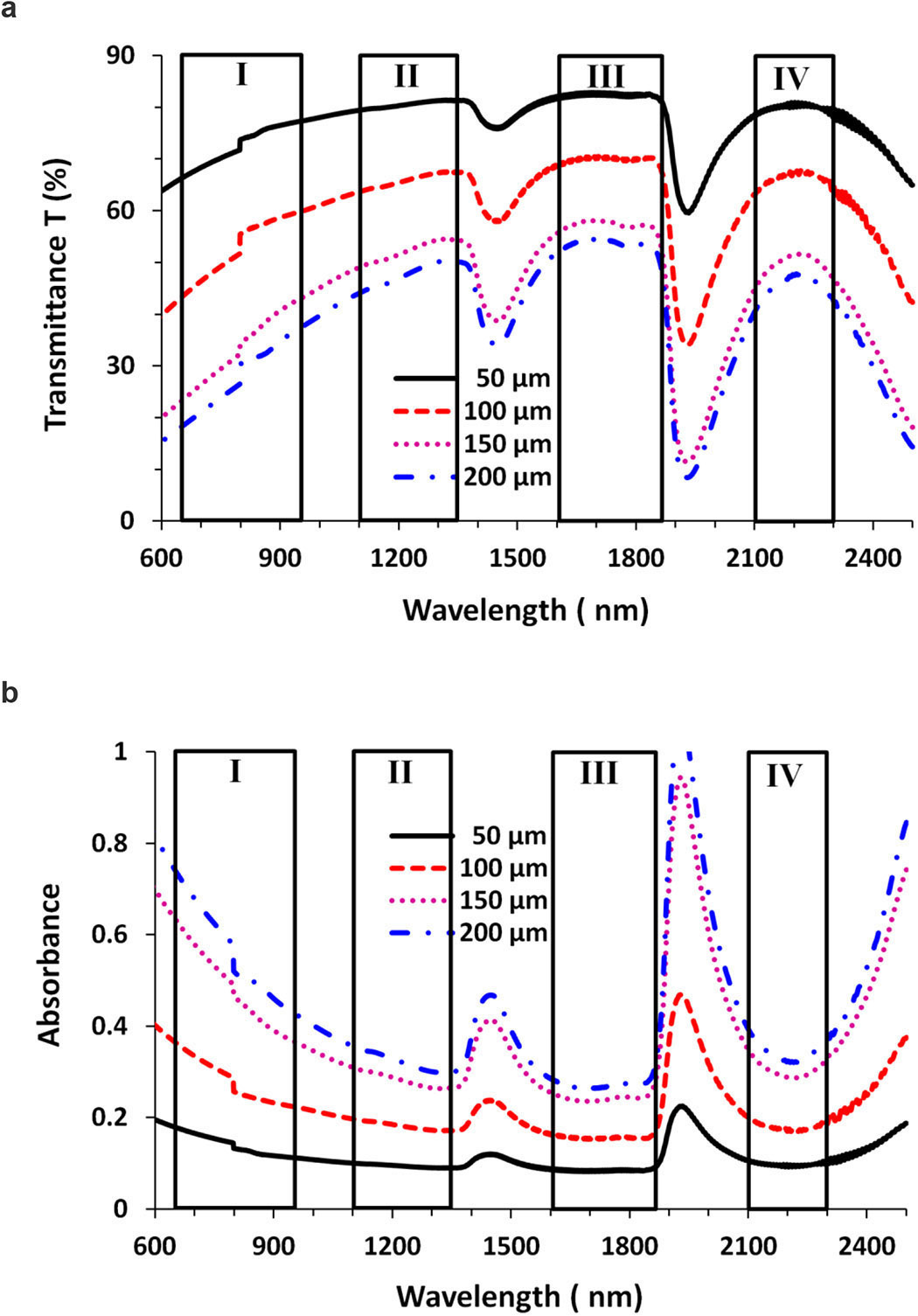 In a previous study,9 we excited fluorescent agents to their second singlet state, where both the excitation and emission wavelengths fell within window I, and achieved enhanced imaging depth in brain tissue. The golden window represents a significant advance over previous approaches, and could have a great impact on the development of microscopy imaging techniques. If both excitation and emission wavelengths fall within the golden window,2 deeper imaging of brain tissue layers with sub-micrometer scale may be possible.

Direct transmission measurements of brain tissue demonstrate that wavelengths in the golden window are the optimal among NIR for deep brain imaging. The next immediate step in our research is in vivo studies on animals using golden window wavelengths with new laser technology.

Laura A. Sordillo is a PhD student and researcher in the Department of Electrical Engineering. She has developed a novel portable device for the assessment of high-grade cancerous lesions, studied the use of an octreotate indocyanine dye to target breast cancer, and found that there exist four near-IR optical windows that can be utilized to image through scattering media such as the breast and the brain, and which can also be useful in the detection of bone diseases. She is a recipient of the CCNY-MSKCC Partnership Graduate Award.

Adrián Rodríguez-Contreras is a biology assistant professor. In 2008, he established the developmental neurobiology laboratory combining anatomical, electrophysiological, and two-photon microscopy tools to study animal models of brain development and disease. His other research interests include applying novel methods in fluorescence microscopy for in vivo studies, exploring the cellular mechanisms involved in the growth of brain tumors, and understanding the functional interactions between neural cells and the brain vasculature.

Robert Alfano is a distinguished professor of science and engineering. He has contributed significantly to the field of ultrafast laser science and is a pioneer in the application of light and photonics technologies to the study of biological, biomedical, and condensed matter systems, and in his research into supercontinuum and novel tunable lasers. He is a fellow of APS, OSA, IEEE, and the NY Academy of Sciences.