Silica microspheres are artificial resonant cavities that show great potential for hosting a wide range of nonlinear effects in low-power and continuous-wave (CW) regimes.1 They can be used to study fundamental light–matter interactions and can even become tunable laser sources at visible wavelengths. Such laser sources can be used in compact spectroscopic applications and ‘lab-on-chip’ systems, and they may pave the way to non-classical light generation.2 In addition, these cavities are capable of sustaining high-quality resonant optical modes, e.g., whispering gallery modes (WGMs).3 WGM resonators trap light within sub-millimeter-sized, dielectric, spherical cavities through the process of internal reflection. The light also becomes resonantly amplified in these devices. This strong spatial confinement of the resonant light leads to very high circulating optical intensities—for long intra-cavity times—that can be exploited for nonlinear wave generation at low-CW power levels. To generate nonlinear waves effectively, however, it is also necessary to fulfill the phase and mode-matching conditions and the energy conservation law.

In the case of WGM resonators that are made of silica glass (i.e., which exhibit inversion of symmetry), second-order nonlinear interactions are forbidden.4 In these cases, the elemental nonlinear interaction is caused by third-order susceptibility (χ3) effects, in which four photons are coupled. Efficient generation of visible light via third-order sum-frequency generation (TSFG)—also known as four-wave mixing—and third-harmonic generation (THG) in silica microspheres, however, has not previously been investigated in a thorough manner.

In our work, it is therefore our aim to study a variety of χ3 nonlinear interactions in silica microspheres. Such microspheres can easily be fabricated directly on the tip of a standard telecom fiber. To obtain microspheres below the fiber diameter, we melt the end of a half-tapered fiber. To do this, we use a fiber fusion splicer to heat and stretch the fiber until it breaks. Through a sequence of arc discharges, we are then able to fabricate spheres with diameters down to about 25μm and to control their size down to about 1% of their diameter.5

In our experimental setup (see Figure 1) the light from a tunable diode laser is amplified with an erbium-doped fiber amplifier (EDFA). After passing a polarization controller, the light is coupled to the WGM resonator by means of a tapered fiber (produced in-house). The laser is tuned into a resonance from high to low frequencies, which results in thermal self-locking6 of the WGM resonator mode to the pump laser. We detect THG and TSFG signals on an optical spectrum analyzer or a spectrometer by collecting the light scattered from the microscope with a multimode fiber (MMF), without coupling optics. Our MMF has a 50μm diameter core and a numerical aperture of 0.2. In addition, we use a 3dB splitter, with one arm ending on a detector, connected to an oscilloscope to allow us to locate the resonance positions while scanning the laser.

In our experiments, we controlled cavity mode dispersion by choosing suitably sized silica microspheres, and we improved the phase and mode matching by exciting high-order polar WGMs.7 A typical emission spectrum for a resonant pump wavelength of 1556.9nm in a 57±1μm-diameter microsphere is shown in Figure 2. In this spectrum, the THG signal occurs at 519.6nm, and the measured THG wavelength exhibits a deviation that is comparable with the resolution of the optical spectrometer. A THG signal that is co-directional with the pump, as expected, is shown in the inset of Figure 2 (where light in the taper is coming from the left).8 We measured an efficiency of the THG light that was scattered by the microsphere and collected with the MMF of up to 10−5. In addition, we measured a record efficiency, of up to 10−6, in a single-mode fiber that was coupled to the THG signal.9 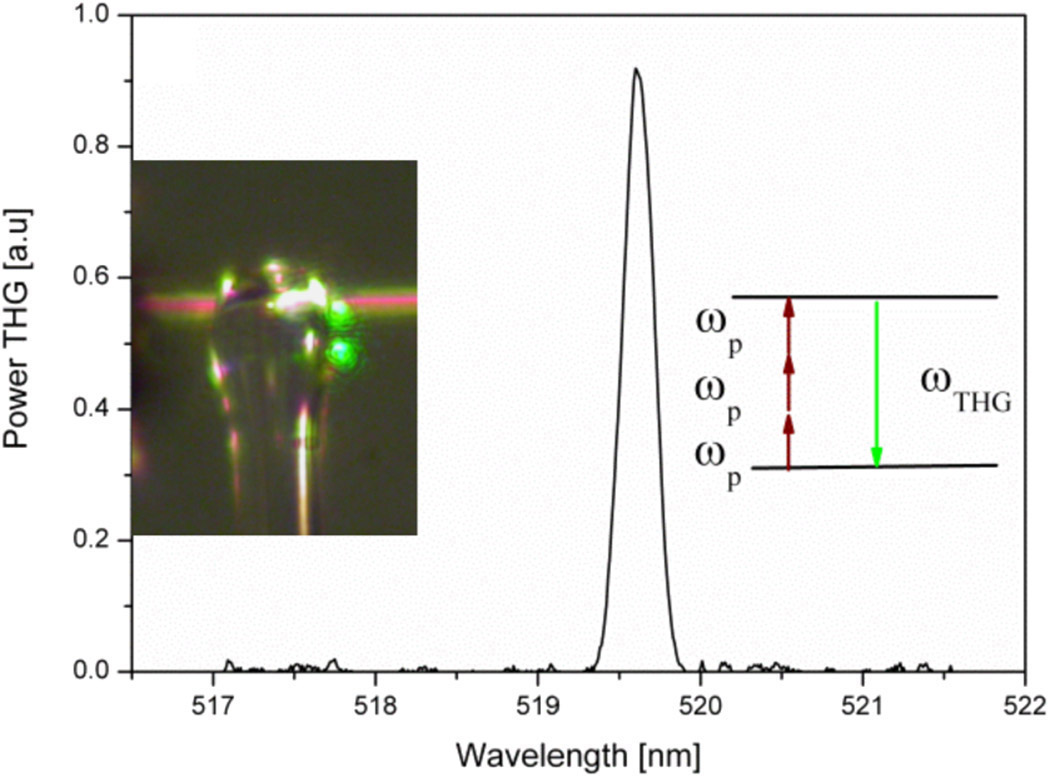 Figure 2. Third-harmonic generation (THG) emission spectrum at 519.6nm from a laser pumped at 1556.9nm. Inset shows a picture (obtained during the spectral measurements) of the microsphere. The green THG signal (ωTHG) is co-directional with the pump (coming from the left side). ωp: Pump signal. a.u.: Arbitrary units.

By increasing the pump power, we can cause stimulated Raman scattering (SRS), and TSFG among the Raman lines, to occur and thus achieve a CW multicolor emission. The measured spectra for each different color, and the corresponding microscope picture of the microsphere, are shown in Figure 3. In the optical images, the TSFG signals are standing waves because the sum involves only SRS fields. A spectrum with two lines, i.e., the THG and TSFG signals of the pump laser (at 519.2 and 531.5nm, respectively) and a Raman line are shown in the inset to Figure 3. In this case, because the nonlinear polarization involves the pump laser (optical picture in the inset), the TSFG is a traveling wave. 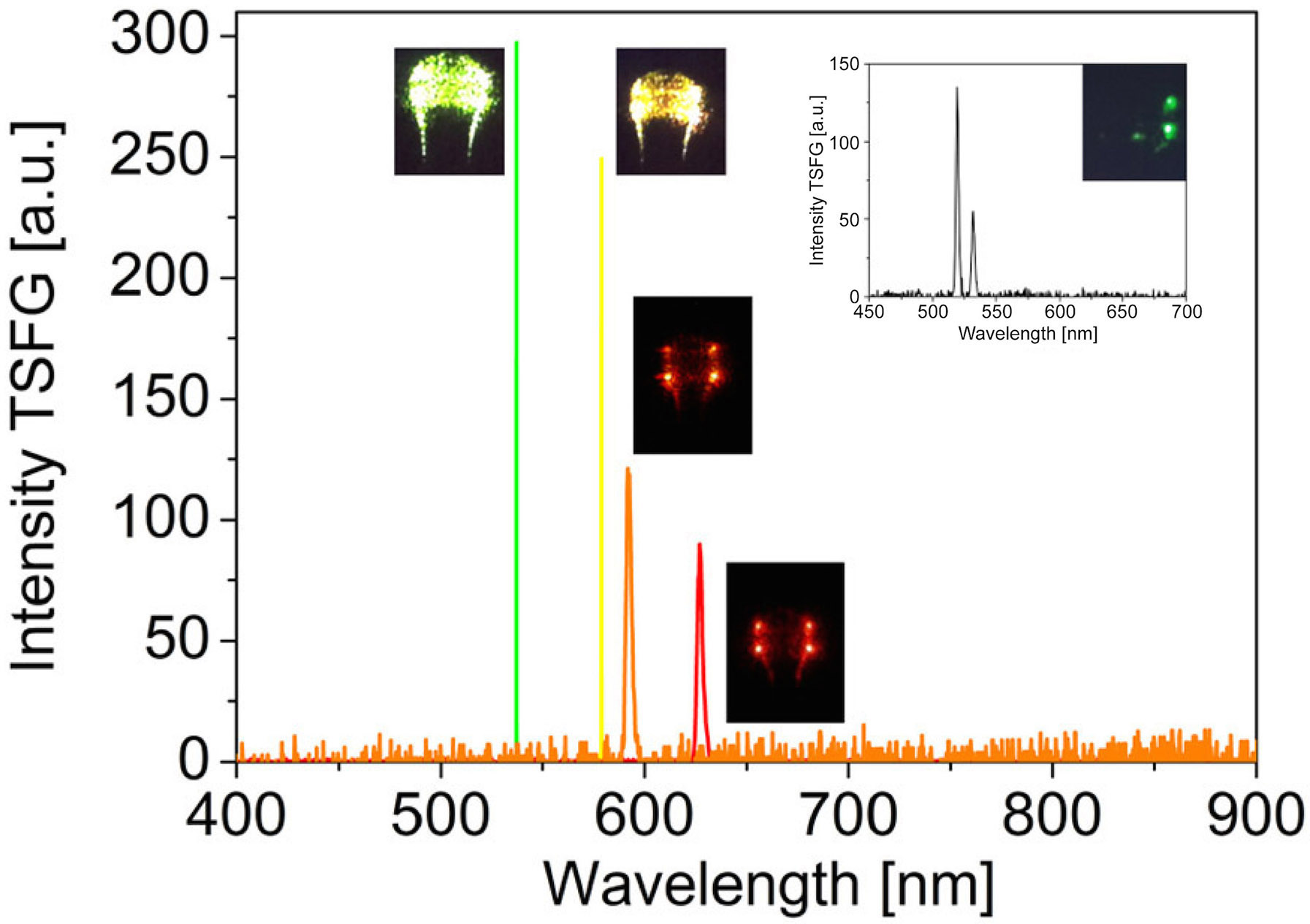 Figure 3. Spectra obtained with different pump wavelengths. Third-order sum-frequency generation (TSFG) standing waves that are generated among cascaded Raman lines are shown at emission wavelengths of 537.2, 578.8, 592, and 625nm. A corresponding microscope image of the microsphere for each spectrum is also shown. Inset: Emission spectrum that exhibits THG (at 519.2nm) and TSFG (531.5nm) among the pump wavelengths at 1554.4 and 1665.4nm. The picture within the inset shows a traveling wave.

In summary, we have experimentally observed fiber-coupled third-harmonic generation and third-order sum-frequency generation in silica microsphere whispering gallery mode resonators for several pump wavelengths in the erbium-band gain of an EDFA. During this process, we controlled cavity mode dispersion by choosing suitable sizes for the silica microspheres. We also improved phase matching by exciting high-order modes that were coincident with a particular THG and/or TSFG frequency. Recently, similar results to ours in crystalline microdisks have been presented.10 Future implementations of our approach will include fabrication of microspheres with nonlinear glasses, which will allow multioctave laser sources to be obtained.

Silvia Soria Huguet received her MSc and PhD in physics from the University of Barcelona, Spain, in 1994 and 1999, respectively. She was previously a Ramon y Cajal fellow at the Institute of Photonics Science (ICFO), Barcelona, and is currently a permanent researcher at CNR-IFAC.