In recent years, semiconductor optical amplifiers (SOAs) have shown great promise for use in evolving optical communication networks, especially long-reach passive optical networks (LR-PONs). These networks can be beneficial in reducing the number of required optical line termination sites (i.e., to a few major central offices).1, 2 However, few LR-PONs that include optical fiber amplifiers, such as erbium-doped fiber amplifiers (EDFAs), have actually been experimentally demonstrated. This is because the operation region of EDFAs is limited to the C (1524–1544nm) and L (1565–1625nm) bands.3, 4

It has been shown that linear SOAs are a more promising technology for use in LR-PONs.5, 6 This is because these devices can counteract the weakness of the EDFA operation region. Linear SOAs offer an ultra-broad wavelength window (about 1280–1650nm), a constant moderate gain (about 15dB) over a large range of input power levels (typically up to 0dBm), a large gain bandwidth (about 60–100nm), and a moderate noise figure (about 7–8dB).7 In addition, the Full Service Access Network and the International Telecommunication Union's Telecommunication Standardization Sector have recently defined the next-generation passive optical network (NGPON) wavelength window. Within this window, an initial future time and wavelength division multiplexed passive optical network (TWDM-PON) has been identified. The upstream (US) wavelength is thus in the C-band and the downstream (DS) wavelength range is within the L+ band (1596–1603nm).8 By contrast, in the wavelength division multiplexed passive optical network (WDM-PON), the full spectrum across both the C and L bands (i.e., 1524–1625nm) is adopted.8 It is therefore necessary for SOAs to have a 3dB bandwidth of at least 80nm to fully cover both the US and DS operation wavelengths.

In this work, we present a novel SOA structure that can act as a single bidirectional device for simultaneous US and DS channel amplification in an NGPON. The 3dB-gain bandwidth of our SOA is significantly extended to be 107nm (1513–1620nm), with a large linear gain (>20dB) and an ultra-wide linear input regime (up to 6dBm). We processed our proposed SOA so that it has a shallow-etched ridge waveguide structure, with a length of 1.5mm and a ridge width of 5μm (see Figure 1). Both facets of the structure have an anti-reflection coating to suppress the facet reflectivity to below 0.005% and thus ensure a single-pass characteristic. To further minimize the reflectivity, the waveguide is tilted at an angle of 8° to the normal of the facets. With our design, the input light wave enters either of the facets horizontally and is thus amplified through the electron-hole stimulated recombination that occurs during its propagation along the length of the SOA. 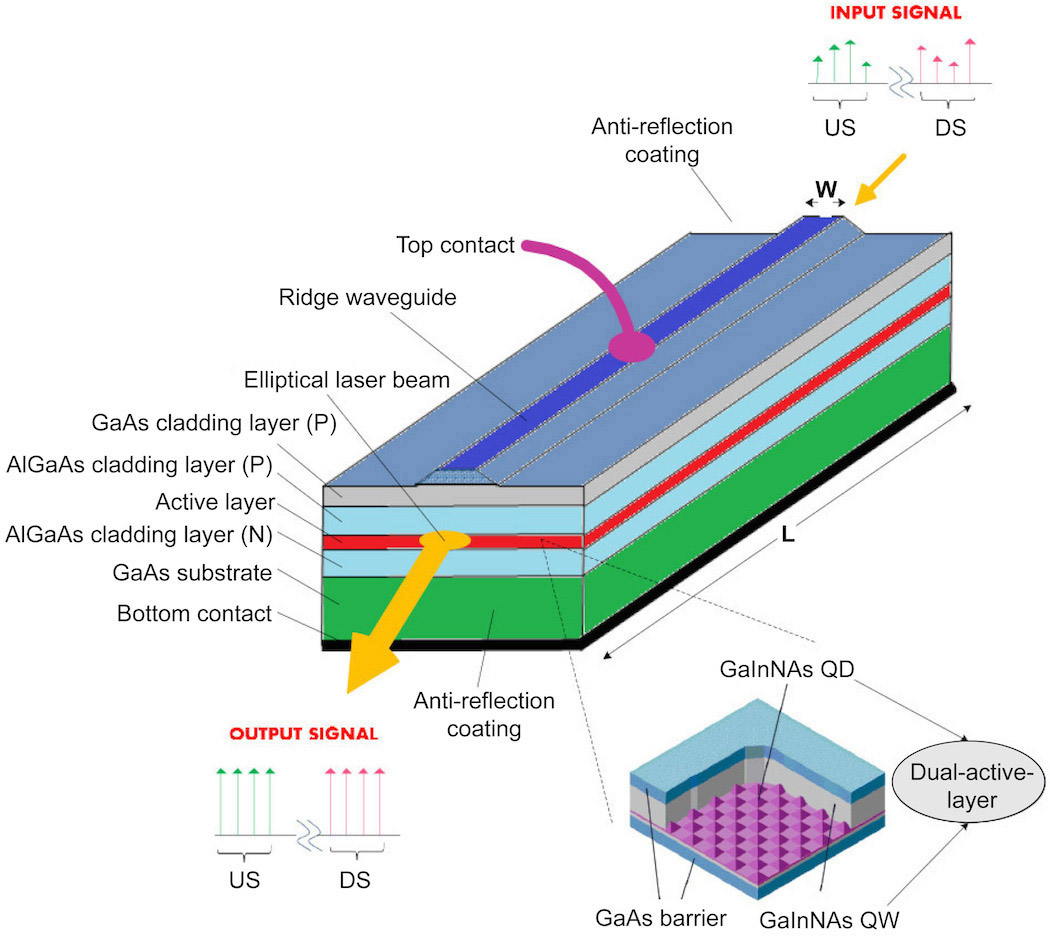 The fundamental idea behind our SOA design is the growth of zero-dimensional shallow quantum dots (QDs) onto the 2D quantum well (QW) layer, which gives rise to our dual-active-layer (DAL) structure. To obtain the epitaxial structure shown in Figure 1, we grow the QW and QDs on an n-doped gallium arsenide (GaAs) substrate. The active region consists of a single layer of self-assembled gallium indium nitride arsenide (GaInNAs) QDs, with an average diameter of 4nm, covered with a 7.5nm-thick GaInNAs QW layer. We use GaInNAs for both the QW and the QDs because it is fully lattice matched to GaAs and because it has the potential to cover a wide range of optical communication wavelengths (1.25–1.65μm) by controlling the composition nitrogen.9 The final part of the DAL structure is a 33nm-thick GaAs barrier layer that provides strain relaxation. The DAL is sandwiched between 1.2μm-thick p- and n-doped layers of aluminum gallium arsenide (AlGaAs) cladding to form the vertical structure of the waveguide. Top and bottom contact layers are also included for current supply and are grown so that electrons can penetrate into the DAL.

We have also built a comprehensive SOA numerical model, which is based on carrier-rate and light-propagation equations, and which can be used to simulate the amplification performance of our proposed DAL SOA.10 We have calculated the material gain that corresponds to both the QW and QD active regions from this model. This is illustrated in Figure 2, compared with the material gain of a conventional QW SOA. The bandwidth limitation means that the conventional QW SOA only covers the TWDM-PON US band and the gain drops to zero in the DS range. For our DAL SOA, however, we observe two positive gain peaks that correspond to the QW and the QDs.

To further examine the amplification performance of our DAL SOA, we injected two optical input wavelengths (1540 and 1600nm)—which correspond to the TWDM-PON US and DS—into both ends of the SOA, with opposite directions. The amplification gain of the two signals, for various optical input powers, is given in Figure 3. We find that both signals are amplified simultaneously via stimulated emission from the QW and the QDs, respectively. The linear gain of both wavelengths is within the 10–15dB range. The 3dB input saturation point (Psat) for both the QW and QD active layers indicates a good linear performance level (more than –2dBm), especially for the QD layer where Psat is >6dBm. 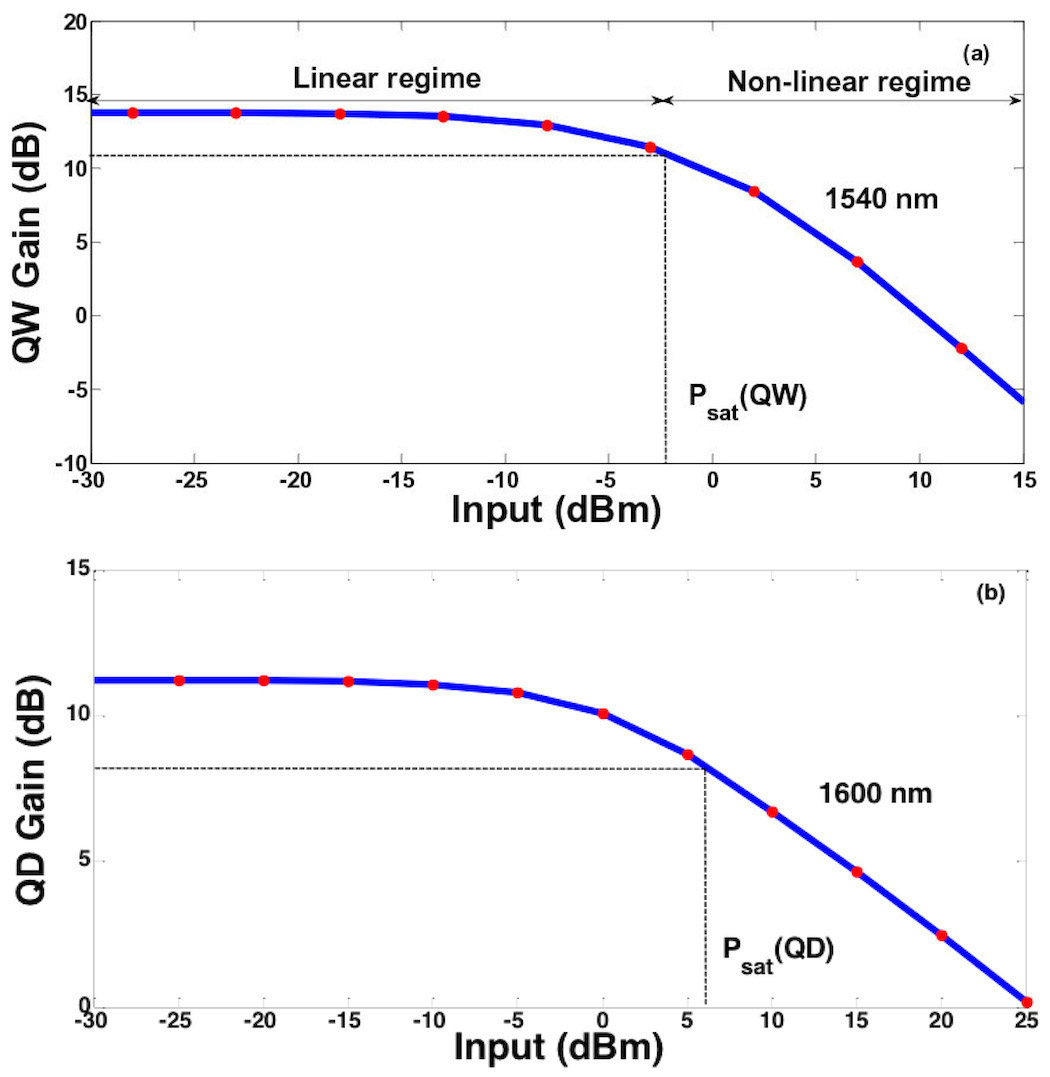 Figure 3. Amplification gain measured as a function of input optical power in the (a) QW and (b) QD active layers, for wavelengths of 1540 and 1600nm, respectively. Psat: Input saturation point.

In our work we have also designed a multiple DAL (MDAL) structure, with which we can further broaden the gain spectrum of our proposed DAL SOA. A schematic diagram of a three-DAL structure is illustrated in Figure 4. In an MDAL, the total gain is thus the summation of each individual DAL gain. Our comparison of the gain from an MDAL SOA and a conventional multiple QW (MQW)—see Figure 5—shows a flat gain roof, with an appreciable linear gain value (more than 20dB) was obtained for both structures. In addition, we find that the 3dB-gain bandwidth of the conventional MQW SOA is 61nm (between 1513 and 1574nm) and 107nm (between 1513 and 1620nm) for the MDAL SOA (i.e., almost double the bandwidth). The maximum possible number of wavelength channels can thus be used and amplified with a single SOA device. Our novel broadband DAL SOA design is therefore a promising candidate for future TWDM-PON or WDM-PON infrastructures. 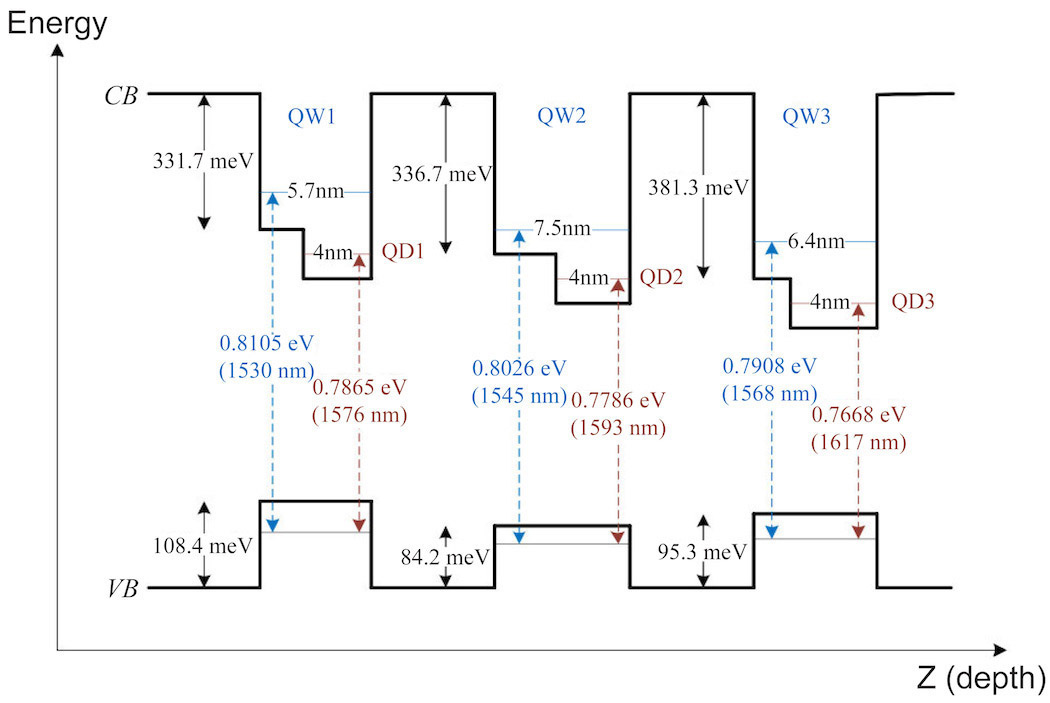 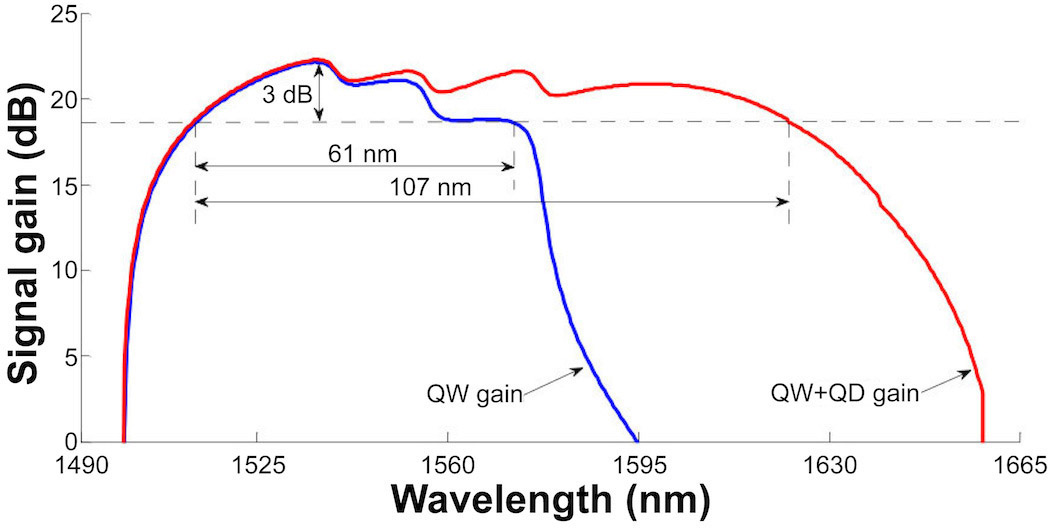 In summary, we have presented a novel dual-active-layer semiconductor optical amplifier design that can be used for simultaneous upstream and downstream channel amplification, thus enabling LR-NGPONs. We have also developed a comprehensive numerical model, which includes carrier-rate and light-propagation equations. Our simulation results show that a maximum gain of 15dB is obtained for a single DAL SOA. In addition, a gain of >20dB, over a bandwidth of 107nm (i.e., covering the C and L band), can be achieved with a multiple-DAL structure. Our future work will involve further optimization of our DAL SOA design to achieve gain and bandwidth improvements. We also expect to fabricate a sample DAL SOA for experimental demonstration.

Xiao Sun received his PhD in electrical and electronic engineering from the University of Bristol, UK. He is currently a research scientist and is working on the research and development of next-generation optical access networks. His research interests include novel semiconductor materials and devices for optoelectronic applications, high-speed passive optical networks, as well as converged wireless and wireline networks.