Energy scaling of light sources has always been a driving force in the development of novel laser technologies. High optical power in a beam of coherent radiation is particularly appealing, since it maximizes the nonlinear interaction between light and matter. This fact allows for a broad portfolio of applications, ranging from industrial tasks such as nonthermal cutting and welding to scientific experiments that exploit advanced frequency conversion and compression schemes. Ultimately, the goal is to achieve maximum peak power with optimally stable, compact, and reliable systems.

For two decades titanium:sapphire has been the gain medium of choice for the construction of mode-locked oscillators (complemented by high-power amplifiers). The remarkable gain bandwidth of this material enables direct generation of intense pulses that have duration as short as 25fs at kilohertz repetition rates. However, in terms of power scalability, this class of lasers is limited by thermal management within the gain medium, and by the complexity of the Q-switched green pump sources for the amplifiers. Typically, pulse energies are limited to a few millijoules at a 1kHz repetition rate, and the only capacity for improvement is by aggressive cryocooling of the rod-type crystals used for amplification.

The search for alternatives focuses on two aspects: finding an active material that supports ultrashort pulses while limiting power dissipation into heat, and selecting a smart geometry of the gain medium that enables efficient cooling while ideally preserving unlimited power scalability. The introduction of ytterbium:yttrium aluminum garnet (Yb:YAG) thin-disk lasers efficiently targeted both issues, providing record-breaking average powers and the possibility of pulsed operation. The geometry of this gain medium—which was pioneered by Adolf Giesen at the University of Stuttgart—exploits effective cooling by means of a large contact area with a heat sink to enable a longitudinal heat flow parallel to the laser beam direction that does not degrade the transverse mode quality. In addition, Yb:YAG can be pumped by diode lasers at 976nm while lasing at 1030nm. This small quantum defect ensures ideal conditions for the scaling of the output power.

One challenge left for Yb:YAG thin-disk technology is the possibility of achieving sub-picosecond pulse duration at the multi-millijoule energy level. Yb:YAG displays a limited bandwidth, resulting in severe gain narrowing at any amplifier stage. To overcome this restriction, we implemented a system that combines erbium:fiber lasers with ytterbium:fibers and Yb:YAG thin-disk technology for high-power amplifications (see Figure 1). The key to our success is the capability of the erbium:fiber front end to tailor-make ultrabroadband spectra of high brilliance and coherence for the seeding of the ytterbium amplifier chain.1 This driving source is extremely reliable and robust, since it requires only standard telecom components. The broadband character of the seed pulses is preserved in a single-pass ytterbium:fiber pre-amplifier that operates in a chirped pulse scheme using a grating stretcher. At this stage, the energy is boosted to 100nJ, while the bandwidth still supports sub-100fs temporal duration. The excess spectral width of the seed source minimizes gain narrowing in the thin-disk regenerative section. In this way, we obtain 615fs pulses with 17mJ of energy at a 3kHz repetition rate after compression.2 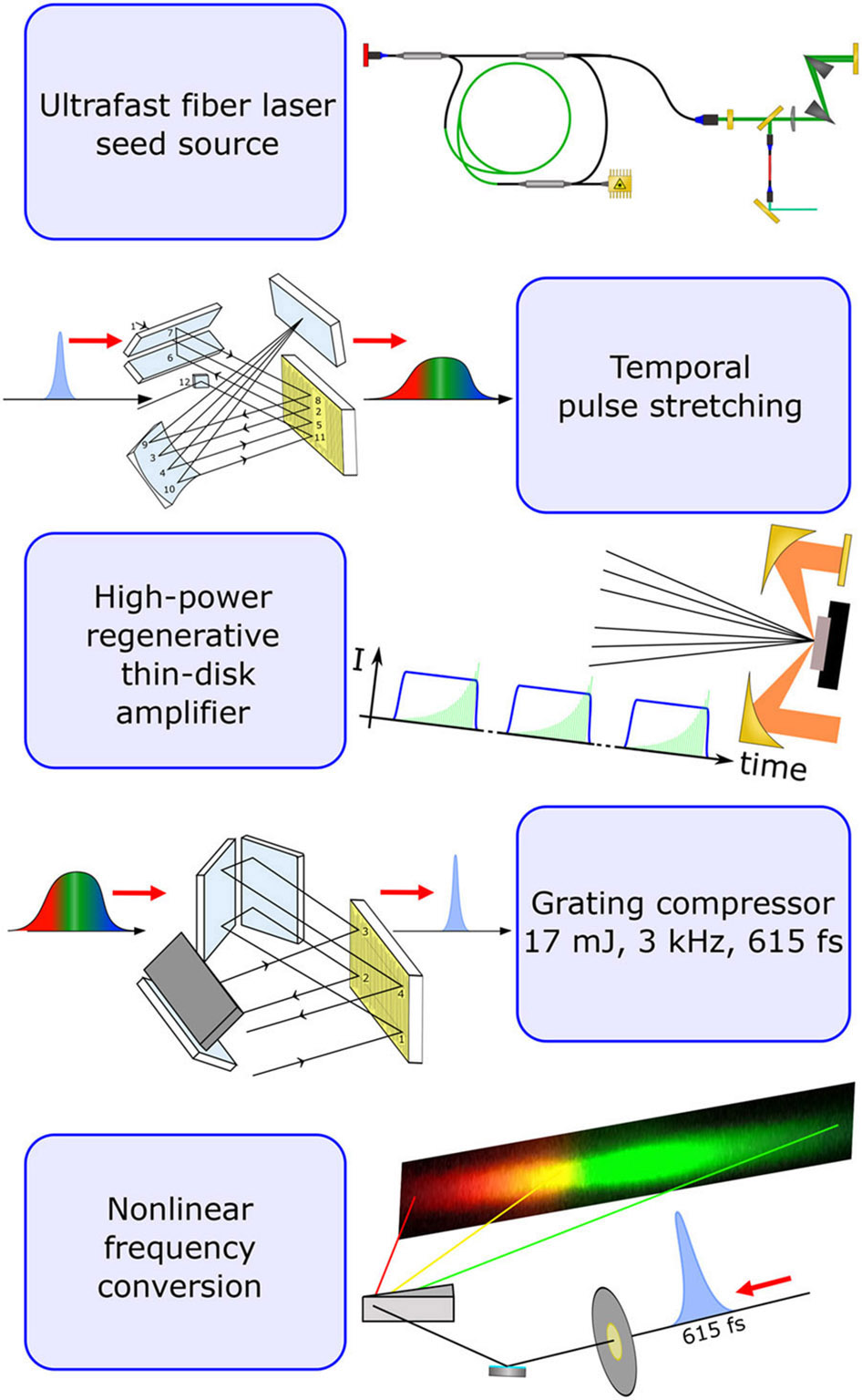 Figure 1. Illustration of the laser system, comprising an ultrafast erbium:fiber seed system followed by an ytterbium:fiber pre-amplifier with a chirped-pulse scheme in a thin-disk regenerative cavity. The output pulses centered at 1030nm are 615fs long and contain 17mJ of energy at a repetition rate of 3kHz. This output may be exploited for experiments testing the behavior of condensed matter under extreme sub-cycle electrical bias (which can only be applied optically). I: Intensity.

In summary, our approach combines broadband and intense fiber seeding with thin-disk laser technology. It qualifies this class of hybrid high-energy lasers as a new family of driving sources for ultrafast experiments. The sub-picosecond pulse duration is sufficient to access fundamental nonlinear interactions such as white-light generation in bulk sapphire plates. This is a crucial benchmark for the design of further nonlinear conversion stages based, for example, on optical parametric amplification. Generation of ultra-intense few-cycle pulses in a broad range that spans frequencies from UV to terahertz is now within reach.

One motivation for the development of such high-power lasers is the aim of conducting terahertz experiments with extreme field amplitudes that reach a non-perturbative regime of light-matter interaction.3 There are already examples of electric fields exceeding 100MV/cm being implemented based on an erbium:fiber–titanium:sapphire hybrid setup.4 In future work, our system will likely go beyond this, while preserving the capabilities for sub-cycle sampling of the optical oscillations, as a direct gateway to elementary quantum dynamics and its precise control. As an example, we may demonstrate new transient states of condensed matter that are far from thermal equilibrium. The rich variety of physical phenomena that can be accessed in the terahertz domain comprises the interplay of electronic charges, spins, and the ionic backbone. We may therefore directly study elementary degrees of freedom, such as phonons, magnons, or energy gaps induced by strong electronic correlations.5, 6 In addition, intense terahertz transients open up the possibility of investigating condensed matter systems under extreme electrical bias (which cannot be applied under stationary conditions). For example, chemical bonds may be transiently broken under high fields, thus unveiling the atomic origin of an electronic band structure.

Alfred Leitenstorfer is a professor and is chair of Ultrafast Phenomena and Photonics. His scientific interests are in subcycle quantum photonics, multi-terahertz physics, femtosecond technologies, and their applications.

Jonathan Fischer is pursuing his PhD, which is aimed at developing ultrafast light sources and their application in multi-terahertz experiments.

Daniele Brida is Emmy Noether group leader and Zukunftskolleg Fellow. His research targets the development of advanced optical technologies and their use in the investigation of ultrafast phenomena in condensed matter.