The world is addicted to electric power, and with emerging economies, electrified transport, and electrical devices everywhere, demand for that power is ever increasing. Currently, most electricity is produced unsustainably, with enormous risks for the environment, health, and supply security.

Global electricity demand could be fulfilled by photovoltaic (PV) electricity generation alone if less than 2% of the land area were covered with PV solar panels (and suitable energy storage made available). However, the price of solar installations is still too high for such mass-scale applications. Currently, half the cost of a solar installation is in the ‘ balance-of-systems’ cost, which includes land and labor,inverters, and maintenance. These costs are difficult to reduce significantly by mass production, but they do scale with the efficiency of the solar cells. A more efficient solar panel means that the same amount of power can be generated by fewer panels, and therefore less labor, land, and maintenance.

Over the past 60 years, silicon solar cells have been optimized to a performance close to their theoretical maximum. Further efficiency increase will be more and more costly and gradual, so radically new approaches are needed. One proposal is singlet fission, which could help us use the energy contained in the green and blue parts of the solar spectrum, where conventional solar cells currently perform particularly poorly.1, 2

In a standard solar cell, an incident photon can generate one electron. The voltage of the solar cell determines how much energy that electron can deliver to the power grid, independent of the energy that was initially carried by the photon. This means that a large fraction of the energy of very energetic photons (such as the green and blue photons) is wasted as heat. However, if that photon is absorbed in a material that is capable of singlet fission, the solar cell can convert it into two electrons. The trick is to split the initial excited state inside the singlet fission material into two lower-energy states that we call triplet excitons. This conversion can be very efficient, and under the right conditions the triplet states can be extracted as electrons.

To achieve efficiencies higher than those for conventional solar cells, we need to take one extra step. The singlet fission material only absorbs the very energetic part of the spectrum, so that all the low-energy photons remain unused. Efforts in this field have therefore focused on combining the singlet fission material with a solar cell material with a low bandgap, which absorbs those low-energy photons (see Figure 1). Then, both can work simultaneously to generate one electron per photon from the low-energy light, and two electrons per photon from the high-energy light. 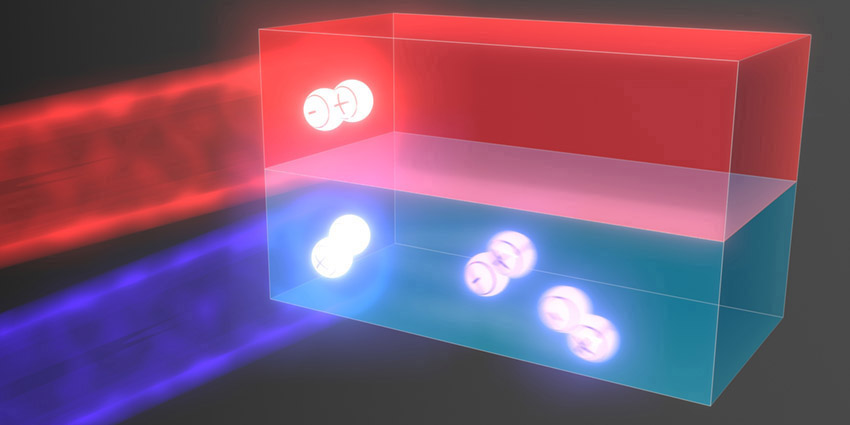 To demonstrate such a solar cell, we used pentacene (a small organic molecule) as the material for singlet fission, and lead-sulfide quantum dots as the low-bandgap material.3 We (and others) were later able to significantly improve these cells.4, 5 We chose quantum dots as the combination materials because their high degree of tunability enables relatively easy realization of the desired properties for electron extraction. However, for a technologically relevant application, singlet fission needs to be combined with solar cell materials closer to applications, such as silicon, copper indium gallium selenide, or perovskite.

In a recent application with silicon,6 the electrons from the singlet fission material were collected separately from the electrons generated in silicon. While this works and could improve the efficiency in principle, it adds unnecessary losses and complexity, for example, from additional transparent contacts that are required. A more elegant alternative would be a direct electron transfer between the two materials, or even transfer of the triplet exciton energy. The latter could allow conversion of the energy from the triplet states into a low-energy photon, which could then be absorbed by any low-bandgap solar cell. Both electron transfer7 and energy transfer8, 9 have been demonstrated experimentally with quantum dot semiconductors, yet more relevant materials remain to be explored.