The integration of high-performance solar cells in urban areas or for augmenting current architectures, i.e., in building-integrated photovoltaics (BIPVs) or building-applied photovoltaics (BAPVs), are challenging directions that are moving toward the achievement of net zero energy infrastructures. Indeed, luminescent solar concentrators (LSCs) can potentially be used for the cost-effective realization of BAPVs and BIPVs. The efficiencies of current LSCs, however, remain cost-prohibitive for commercialization purposes.

The operating principle of an LSC—illustrated in Figure 1—follows three important steps: light absorption, emission, and trapping. Light-absorbing molecules embedded within, or on, a suitable waveguide (e.g., a plastic or glass planar substrate) harvest the sunlight and subsequently luminesce. The emitted light is then trapped in the substrate by total internal reflection. Finally, the trapped luminescence is waveguided to the thin edges of the LSC, where solar cells can be attached for photoelectric conversion of the concentrated light. Reabsorption of the luminescence by other chromophores, as the light traverses the waveguide, is a key loss mechanism for LSCs, which causes the light output to be attenuated. This reabsorption problem stems from the low Stokes shift (i.e., the energy separation between absorption and luminescence) of the chromophores that are used as light-harvesting components in an LSC. Organic dyes have been the benchmark chromophores for LSCs over the past three decades. The small Stokes shift and susceptibility to concentration quenching of organic dyes, however, restrict high-efficiency light harvesting in such LSCs.1 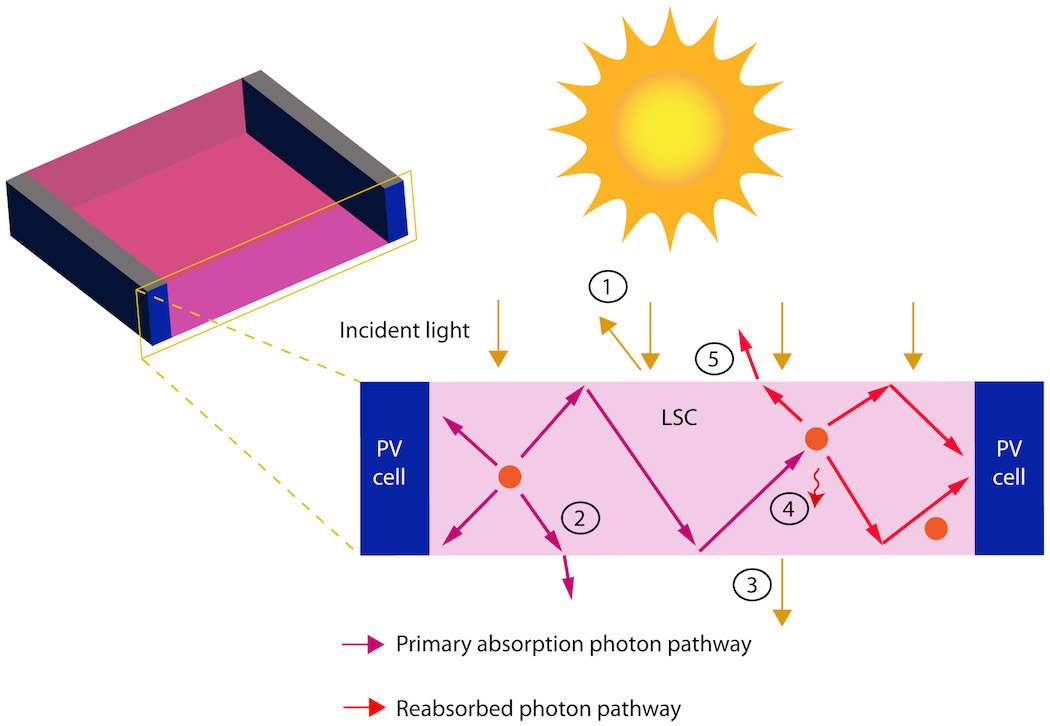 Figure 1. Illustration of the predominant loss mechanisms (labeled 1–5) in a luminescent solar concentrator (LSC). These mechanisms can reduce the light-harvesting efficiency of the device, regardless of the configuration. 1: Surface reflectivity losses. 2: Escape cone losses. 3: Transmission losses. 4: Reabsorption leading to non-radiative decay. 5: Re-emission to an escape cone. Scattering losses caused by imperfections in the polymer waveguide or large aggregates can exacerbate both the reabsorption and the escape cone losses. PV: Photovoltaic.

In our recent work, we have started to examine chromophores that have negligible fluorescence intensity when they are in solution, but that become highly emissive in polymer matrices such as poly(methyl methacrylate)—PMMA—or in the form of a pristine thin film. This photophysical property distinguishes the chromophores from other, traditional, organic LSC dyes (see Figure 2) and has become widely known as aggregation-induced emission (AIE).2 We have applied these chromophores in LSCs and demonstrated performance levels that are competitive with inorganic nanoparticles (see Figure 2).3 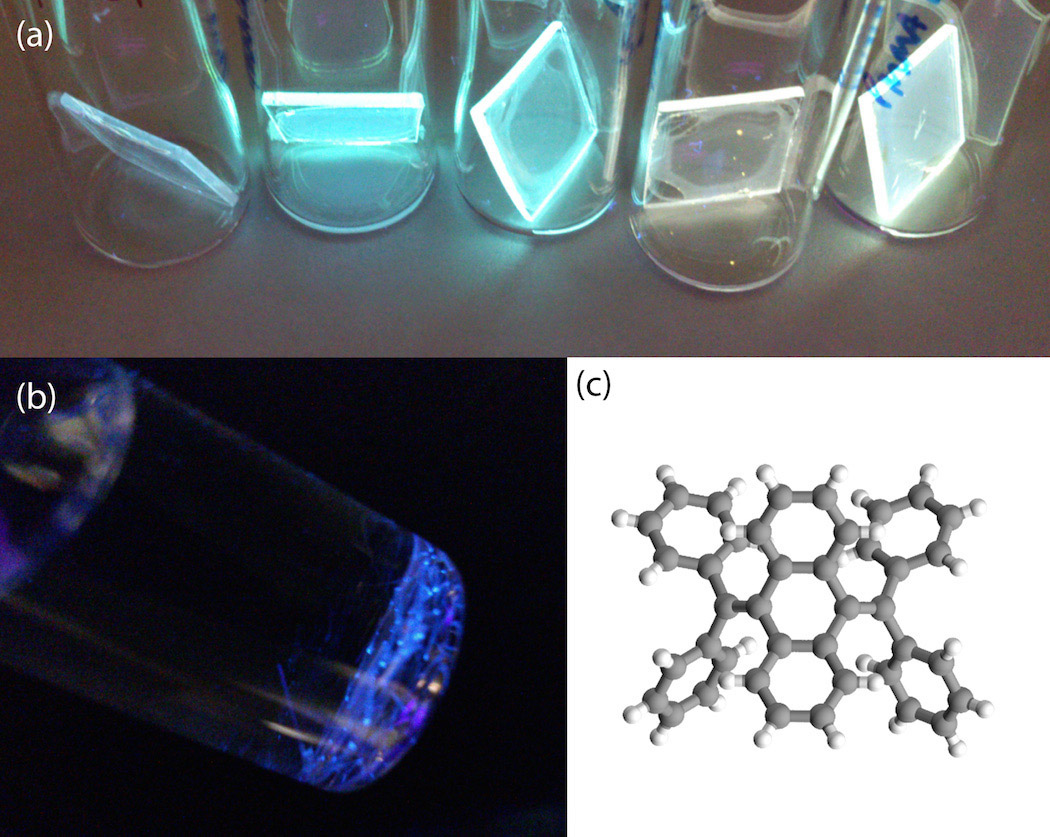 Figure 2. Aggregation-induced emission (AIE) chromophores. (a) Photograph of the emission of different AIE materials in poly(methyl methacrylate). (b) Longitudinal crystals of a chromophore that exhibits self-waveguiding behavior under UV illumination. Bright spots are the tips of the crystals. (c) Molecular structure representation of an AIE chromophore, derived from single-crystal x-ray crystallography data.

The photophysical properties of AIE chromophores mean that they can be used in very high concentration (i.e., more than 100mM in PMMA). We investigated this characteristic in transparent organic LSCs, with the use of gem-pyrene ethenes (the structures shown in Figure 3).4 At very high concentration of the AIE chromophores, we obtain a large Stokes shift for gem-pyrene ethenes, as well as a high fluorescence quantum yield. Furthermore, transparent LSC devices in which we use the gem-pyrene ethenes exhibit an efficiency that is comparable to a state-of-the-art phosphor-based LSC (with the former having significantly better stability in air).4

Figure 3. (a) Molecular structure illustration of two gem-pyrene ethenes, derived from single-crystal x-ray crystallography data. (b) Photograph of a fully transparent LSC device in which gem-pyrene ethenes are used as downshifting chromophores.

Since the luminescence quantum yield of AIE chromophores is high—even at high concentrations—efficient energy migration (‘Förster transfer’) among similar chromophores can be observed. We have demonstrated that excitation energy transfer—from AIE donors to a low-concentration highly fluorescent acceptor (see Figure 4)—can cause a reduction of reabsorption, without sacrificing light harvesting in LSCs (in contrast to single dyes).5 The spectral separation between the absorption of the donor and the emission from the acceptor is a key factor in minimizing the reabsorption via this energy transfer strategy.

Figure 4. (a) Schematic illustration of the energy migration and energy transfer processes in LSCs that contain AIE molecules. (b) Photograph of an LSC device fabricated on a standard glass microscope slide, in which an AIE donor is used with a highly fluorescent dye acceptor. The photograph was taken on a cloudy day in Melbourne, Australia. Light emission from the edges of the device is clearly visible.

In summary, we have demonstrated that aggregation-induced emission chromophores are potentially useful for application in luminescent solar concentrators. The emergent photophysics from AIE chromophores can be used to simultaneously solve both the reabsorption and concentration quenching issues that are associated with current LSC devices (in which organic dyes are used). In further work that we are currently undertaking, we are extending the concepts presented here to increase the efficiencies of LSCs.

James Banal is a PhD candidate working on luminescent solar concentrator materials. He completed his undergraduate degree in 2011 at the University of Santo Tomas, Philippines, with a thesis on conducting polymer chemical sensors. In 2012 he graduated with first-class honors from the University of Melbourne for his work on electron-deficient conjugated polymers.

Ken Ghiggino is the Masson Professor of Chemistry. His research interests include the photophysics of light-harvesting materials for artificial photosynthesis and photovoltaic applications.

Wallace Wong is an Australian Research Council Future Fellow. He has been working in the area of organic electronic materials since 2006. His research interests include semiconducting polymers, fullerene chemistry, luminescent dyes, continuous flow processing, and supramolecular chemistry.