Microfabrication is commonly achieved via interactions of light and a photoresist (an optically sensitive material). In this process, the light is shaped into the desired pattern by a mask and projected onto the photoresist. The entire photoresist sample is then submerged within a developer, which dissolves the exposed photoresist and leaves the unexposed photoresist intact. Mask patterns can thus be imaged on a substrate. This step—known as photolithography—is crucial in the microfabrication process. It allows selective deposition and etching of metals and semiconductor materials, which are the building blocks of optoelectronics and microelectronics. There is currently an ongoing drive to improve photolithography techniques for the production of increasingly small geometries and thus meet the demand for smaller devices in everyday electronics equipment (e.g., phones, laptops, and other wireless devices). Semiconductor manufacturers have responded to this demand by reducing the minimum feature size in their photolithography systems, but this has caused an increase in manufacturing and ownership costs (see Figure 1).1 Although electron-beam (e-beam) and focused ion beam lithography are used for sequential fabrication of features at sub-micron sizes in academic settings, both these methods are time-consuming, costly, and unsuitable for large areas. 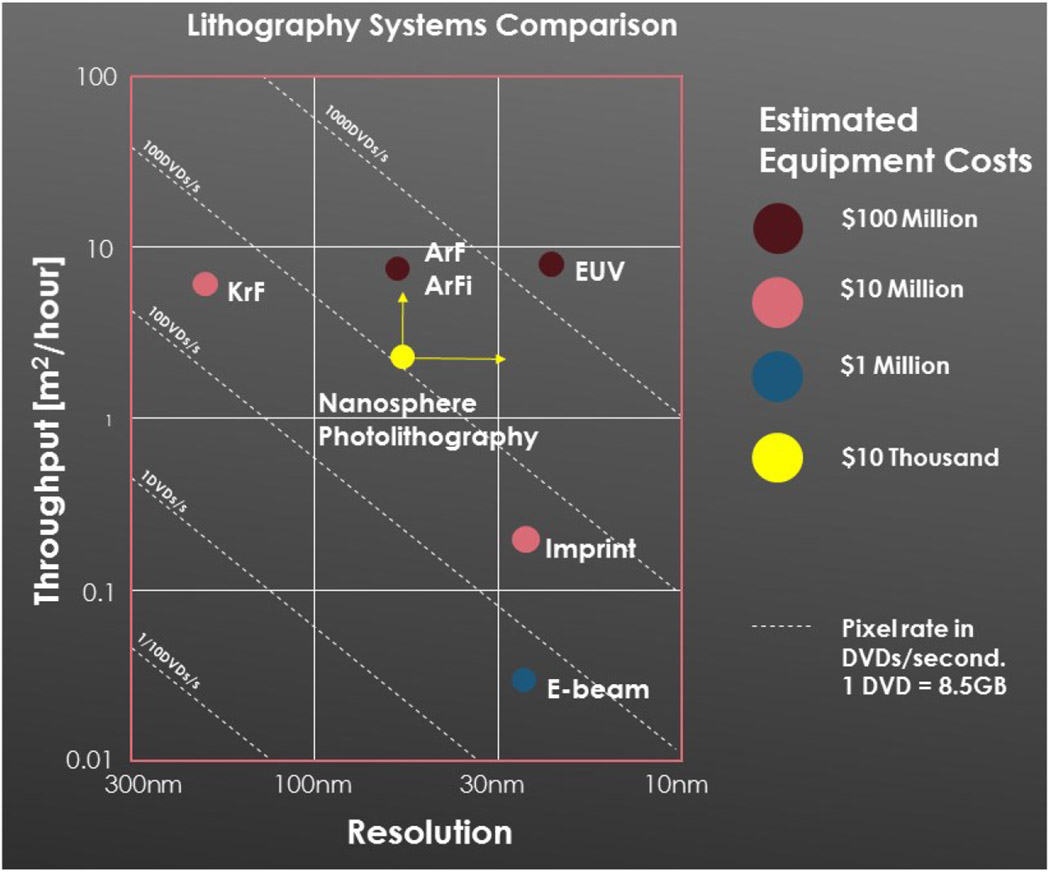 In recent work, nanosphere photolithography (NSP) has been introduced as a technique to tackle the pitfalls of e-beam and ion beam lithography in research environments.2 Moreover, NSP offers a cost-effective choice for industry-level photonic applications. In NSP, low-cost microspheres with unusual optical properties are used. Numerical simulations of microspheres that produce ‘photonic jets’ (regions of pencil-like focused light that are significantly more intense than their surroundings) were first reported in 2005.3 Much theoretical work has since been conducted to identify the salient properties of these photonic jets. For instance, it has been shown that when the maximum intensity—or focal spot—is positioned near the sphere's surface, it produces a beam waist that is smaller than one-half of the wavelength of the incident light.3 When a microsphere is placed on a photoresist and illuminated, the photonic jet produces a small sliver of exposed photoresist immediately below the sphere. By tilting the angle of incidence of the incoming light, multiple independent exposed regions can be produced from one sphere. The sphere's total exposed pattern is known as a unit cell. When spheres are applied in a closely packed formation over a photoresist region, identical unit cells are lithographically produced by each sphere. These properties are thus used in NSP to produce sub-micron feature sizes.

In our work,4 we have demonstrated patterning with NSP by producing periodic unit cells on a photoresist. Each of our unit cells contains nanopillars or nanoholes (depending on the photoresist polarity), which can be symmetrically or asymmetrically distributed (see Figure 2). With nanopillars, we are able to achieve feature widths that are smaller than 100nm. Our work thus indicates that NSP has the potential to produce sub-100nm feature sizes at short wavelengths. 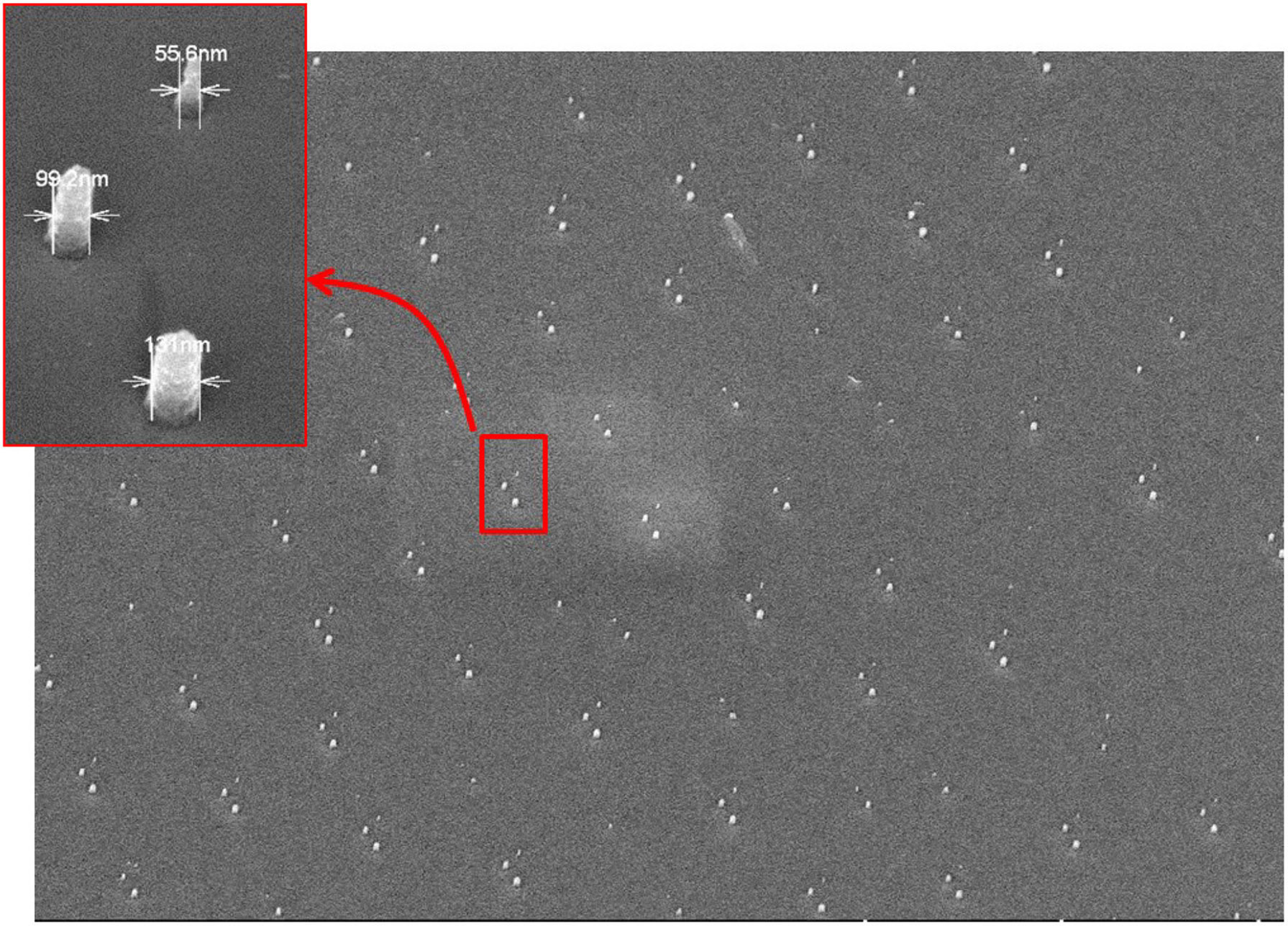 Figure 2. Scanning electron microscope image of a periodic array of unit cells. Each unit cell consists of different-sized nanopillars, with a minimum size of about 55nm (see inset). This pattern was produced with a single NSP exposure.

The high throughput and low cost of NSP make it an ideal technique for energy applications with low profit margins (e.g., the fabrication of solar cells and LED light bulbs). Periodic arrays of nanostructures fabricated on a device surface can increase the efficiency of both energy-harvesting and energy-transferring devices. Companies compete to produce highly efficient products with periodic nanostructures at scale, but they struggle to achieve this at reasonable manufacturing cost. It is therefore unsurprising that many research groups are now beginning to use NSP processing to fabricate several types of devices. For example, NSP has been used to generate phosphorus-free white-light-emitting diodes,5 cadmium telluride nanopillars for power enhancement in solar cells,6 and metal–insulator–metal disks that are used to excited dark plasma modes.7

We have also recently used NSP to produce perfect absorbers and emitters in the IR region.8 Our fabricated devices included a circular meta-atom, a full-ring meta-atom, and a crescent (broken ring) meta-atom. We conducted Fourier transform IR experiments (at incidence angles of 10, 20, and 30°) on these devices and measured their absorption spectra. We also compared these experimental results with corresponding simulated finite-difference time-domain spectra. The results of this work—illustrated in Figure 3—indicate that the capture and emission of thermal radiation could have a profound impact on future energy-harvesting systems. 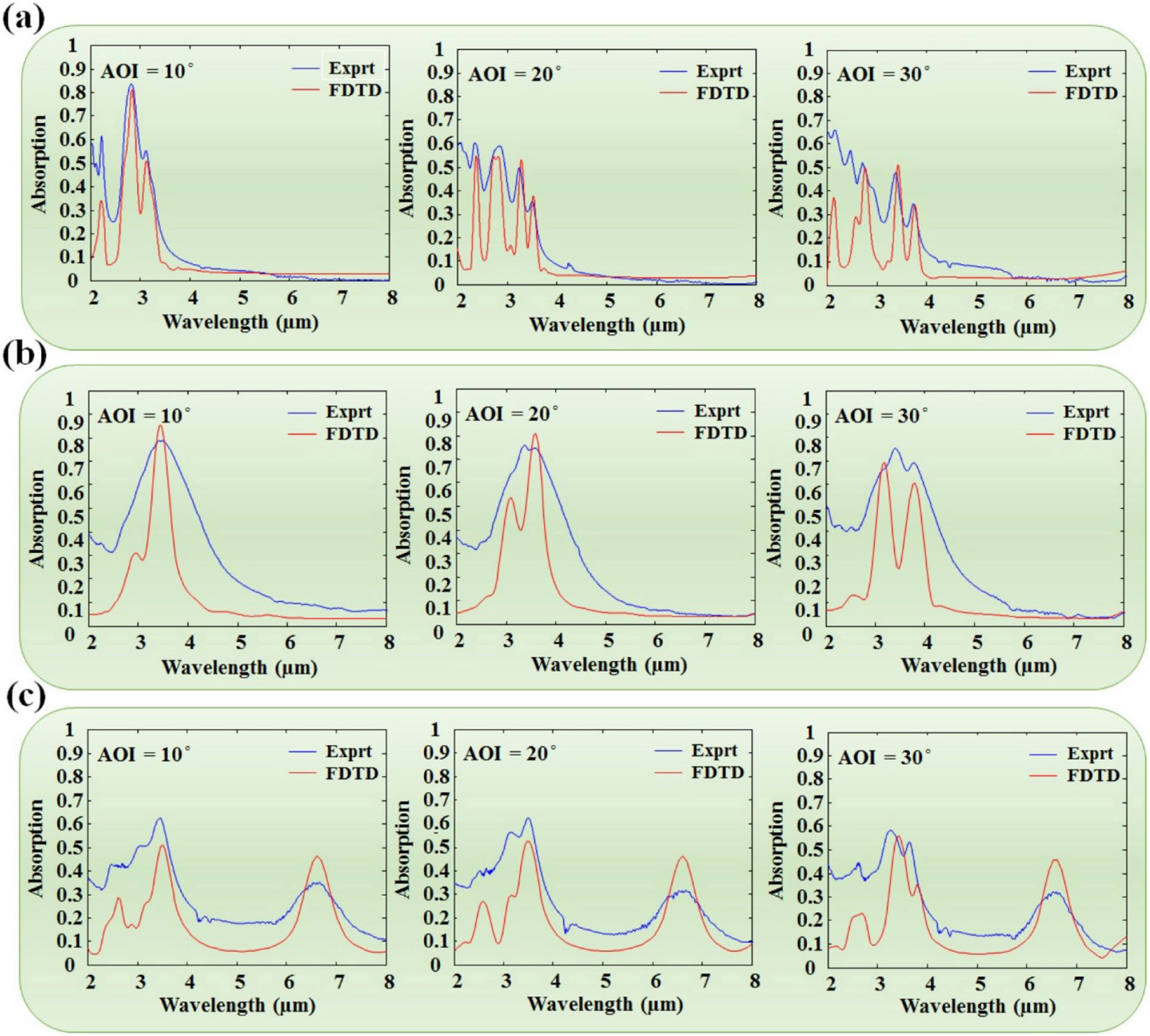 According to the Shockley-Queisser limit, single-junction photovoltaic cells have a maximum efficiency of 41%.9 Solar thermophotovoltaics first convert the Sun's energy to heat. The photovoltaic then produces electricity from the thermal radiation. With our NSP-produced perfect absorbers, we can enable solar thermophotovoltaics to selectively absorb sunlight and to emit this thermal radiation to achieve a much higher efficiency. In addition, as NSP is less expensive than e-beam lithography (see Figure 1), it is an ideal choice for further exploration of nanostructures and their effects on perfect absorbers.

In summary, we have demonstrated that nanosphere photolithography can be used for patterning purposes, by using this technique to produce periodic unit cells on a photoresist. In our work we have been able to achieve feature sizes smaller than 100nm. We have also used NSP to produce devices that are perfect absorbers and emitters at IR wavelengths. NSP thus has the potential to shape basic research in photonics and nanotechnology. This novel fabrication technique can also be used to reduce the cost of manufacturing future devices for cost-sensitive applications, such as energy harvesting and bio-sensing. In our ongoing work, we are using novel methods to further reduce the feature sizes, while increasing the field of exposure of NSP, and we are pushing the exposure wavelength to the deep-UV region. In addition, recent studies have shown that photonic jets can be produced with different, yet simple, geometries by enhancing the surface modes of curved surfaces. These new designs could allow better uniformity and a wider field of exposure per unit cell. We are also pursuing NSP-based methods that could produce 3D nanostructures. All these complementary developments provide a highly parallel process that continues to be pushed to produce smaller and more versatile feature sizes at reasonable cost.

This work is partially supported by National Science Foundation (EECS-1206155 and EECS-1310620) and Army Research Office (W911NF-11-1-0390) awards. Northwestern University shared facilities and the Northwestern high-performance computing center were used for this work.

Hooman Mohseni has been the recipient of numerous awards, including the National Science Foundation Faculty Early Career Development Program, the Defense Advanced Research Projects Agency's Young Faculty Award, and the Northwestern Faculty Honor Roll. He also serves on the editorial board of several journals, has published more than 120 peer-reviewed articles in major journals, and is a Fellow of SPIE and the Optical Society.