A variant of Raman spectroscopy allows detection and identification of concealed material without affecting the sample, showing promise as a defense technique.
08 March 2016
Jason Guicheteau and Rebecca Hopkins

Defense and security applications typically require positive and non-destructive detection or identification of samples to enable the responder to make effective decisions and preserve potential evidence. Over the past 30 years, Raman spectroscopy has continued to prove the effectiveness of vibrational spectroscopy as an analytical technique in defense research and applications, while not perturbing the integrity of the sample. In 2005, Matousek and coworkers described the ability to detect Raman contributions from a subsurface layer of trans-stilbene powder through a manufactured barrier of poly(methyl methylacrylate) by shifting the collection optics away from the incident excitation.1 This initial experiment launched innovative research into a wide range of scientific disciplines. These include quality assurance of produce, pharmaceutical analysis, medical applications (e.g., cancer detection), forensic science, and more relevant to security and defense purposes, through-barrier detection of chemicals, explosives, and narcotics.

Spatially offset Raman spectroscopy (SORS) is based on the fact that incident laser light, on interaction with a surface, elastically scatters and diffuses through subsurface layers of a material. Since this elastic diffusion is random, the Raman photons generated from within the container or subsurface are likely to migrate laterally before being emitted and scattered back. Traditional Raman instruments operate in an epi-illumination configuration in which the collection optics are co-aligned with the excitation laser in a 180° backscattering geometry. This setup is sufficient when using Raman to interrogate materials in transparent containers or open-air scenarios. However, for detection scenarios that involve opaque containers or subsurface threats, the collection optics benefit from being spatially offset. This configuration allows us to collect the deep penetrating Raman photons that had a greater interaction with the concealed material before reaching the detector. Furthermore, we have shown that, by shifting the collection optics, the Raman signal from the container decreases in spectral intensity, which in the case of strongly scattering plastics can obscure the spectral signature of the unknown material contained within. Using a SORS configuration has the dual advantage of increasing the chemical signature of the hidden threat while potentially decreasing the signal from the obscuring barrier (see Figure 1). 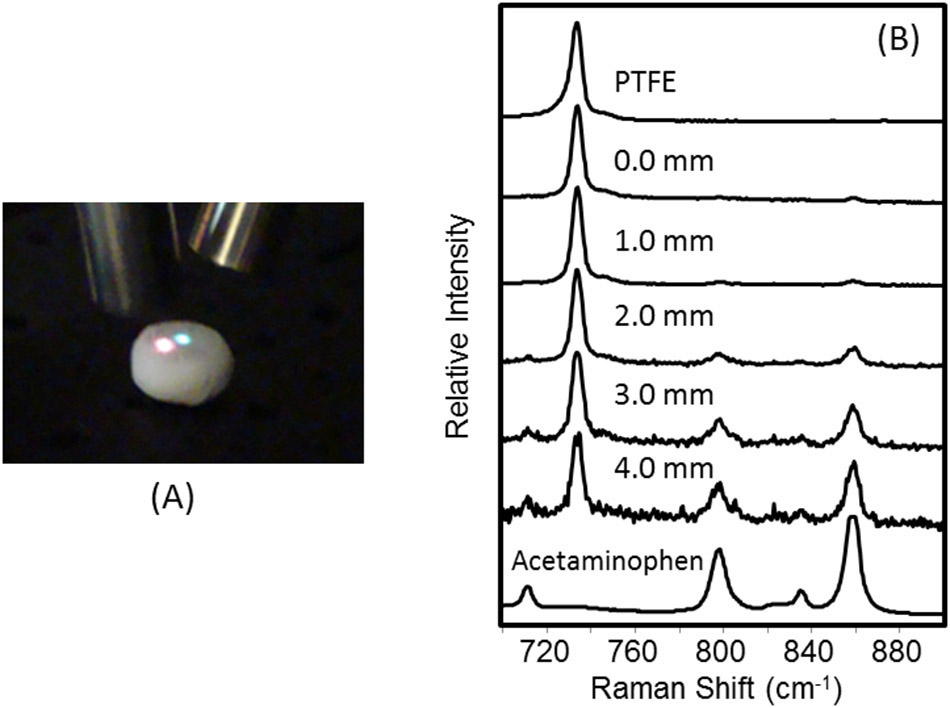 Figure 1. (A) Spatially offset Raman spectroscopy (SORS) set up with a two-fiber-optic probe demonstrating visual offset between excitation and collection path to detect an acetaminophen tablet wrapped in a 2.5mm-thick layer of Teflon (PTFE) tape. Light is shown through both probes to help highlight the offset distance. (B) SORS response demonstrating emergence of the acetaminophen signal contained within the Teflon tape at various offset distances.

The SORS concept has allowed researchers to develop detection and screening tools to identify threat materials concealed in opaque bottles that a decade ago proved difficult to ascertain. Matousek reported detection of hydrogen peroxide concealed in a sun lotion bottle, which demonstrated the scenario of hiding hazardous material in a false container.2 Shortly after, Zachhuber and coworkers demonstrated standoff SORS using a frequency-doubled neodymium-doped yttrium aluminum garnet (Nd:YAG) laser to generate Raman spectra of concealed explosive and liquid materials from a distance of 12m through low-density polyethylene bottles.3 Hopkins and coworkers further demonstrated the utility of SORS by detecting urea in multicolored glass and plastic bottles using short-wave IR excitation at 1064nm.4 The use of 1064nm excitation also reduced the background fluorescence from the containers. At the US Army Edgewood Chemical Biological Center investigators are exploring new SORS probe head designs, as well as imaging capabilities for further through-barrier applications. Cobalt Light Systems has achieved commercial success by developing a suite of SORS-based instrumentation. Several of their products are currently in use at airports throughout the UK and Europe for bottle-scanning purposes.

As the international research community continues to push advancements in SORS, the ability to identify hazardous material through containers and barriers could become a great asset in defense purposes. This novel technique has already proved useful in airport screening and checkpoint scenarios where screening of large numbers of people is required, showing potential in civil- and defense-related applications. In April at the Defense and Security symposia, part of the 2016 SPIE Defense and Commercial Sensing Conference, we will present a perspective on the current research in the SORS field and discuss possible future improvements and applications.

The opinions, interpretations, conclusions, and recommendations are those of the authors and are not necessarily endorsed by the US Government. Content includes material subject to ©Crown copyright (2016), Dstl. This material is licensed under the terms of the Open Government Licence except where otherwise stated. To view this licence, visit http://www.nationalarchives.gov.uk/doc/open-government-licence/version/3 or write to the Information Policy Team, The National Archives, Kew, London TW9 4DU, or email: psi@nationalarchives.gsi.gov.uk.