Other efforts to harvest solar heat, such as hybrid solar cells with thermoelectric modules or solar selective absorbers, have shown an increase in energy collection, but energy conversion and heat collection were not optimized. Furthermore, the hybrid harvesters have been bulky. In this work, we use a hybrid energy harvester with a photothermal layer—a thin polymer film combined with a pyroelectric polymer film—to collect solar heat.

The hybrid energy harvester (see Figure 1) in this work collects solar heat using photothermal,3 pyroelectric,4 and thermoelectric5 methods combined with a solar cell.6 It consists of a dye-sensitized solar cell (DSSC), a pyroelectric film device, and a thermoelectric device. We also built circuitry composed of capacitors, switches, and a diode bridge rectifier to operate an LED lamp and electrochromic display (ECD) device. The rectifier converted the pyroelectric film device output (AC to DC), which was then stored in a capacitor (47mF, 25V) used to turn on the LED lamp. A second capacitor (10F, 5.4V) stored output energy generated by the series-connected photovoltaic and thermoelectric modules and drove the ECD. 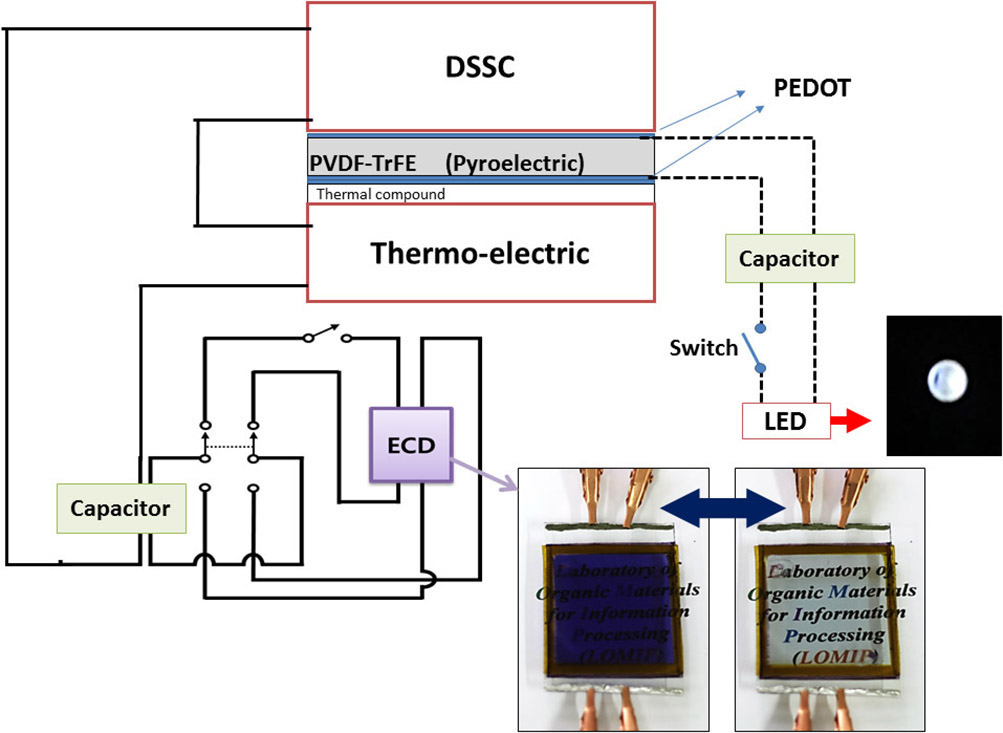 The DSSC converts UV and some of the visible light into electricity, letting near-IR (NIR) and the remaining visible light through. To reuse this light, we prepared a pyroelectric poly(vinylidenefluoride-co-trifluoroethylene) (PVDF-TrFE)7 film with highly conductive and photothermal poly(3,4-ethylenedioxythiophene) (PEDOT) electrodes. To confirm the photothermal effect of the PEDOT electrodes, we varied the number of PEDOT film layers on PVDF-TrFE film, as shown in Figure 2(a): a bare PVDF-TrFE film (P0), one PEDOT layer (P1), and two PEDOT layers coated on both sides of PVDF-TrFE film (P2). The film with two PEDOT layers absorbed more NIR and had a temperature increase of more than 10K: see Figure 2(b). We conclude from light spectra of the sample that the PEDOT electrode layers drove the photothermal effect. 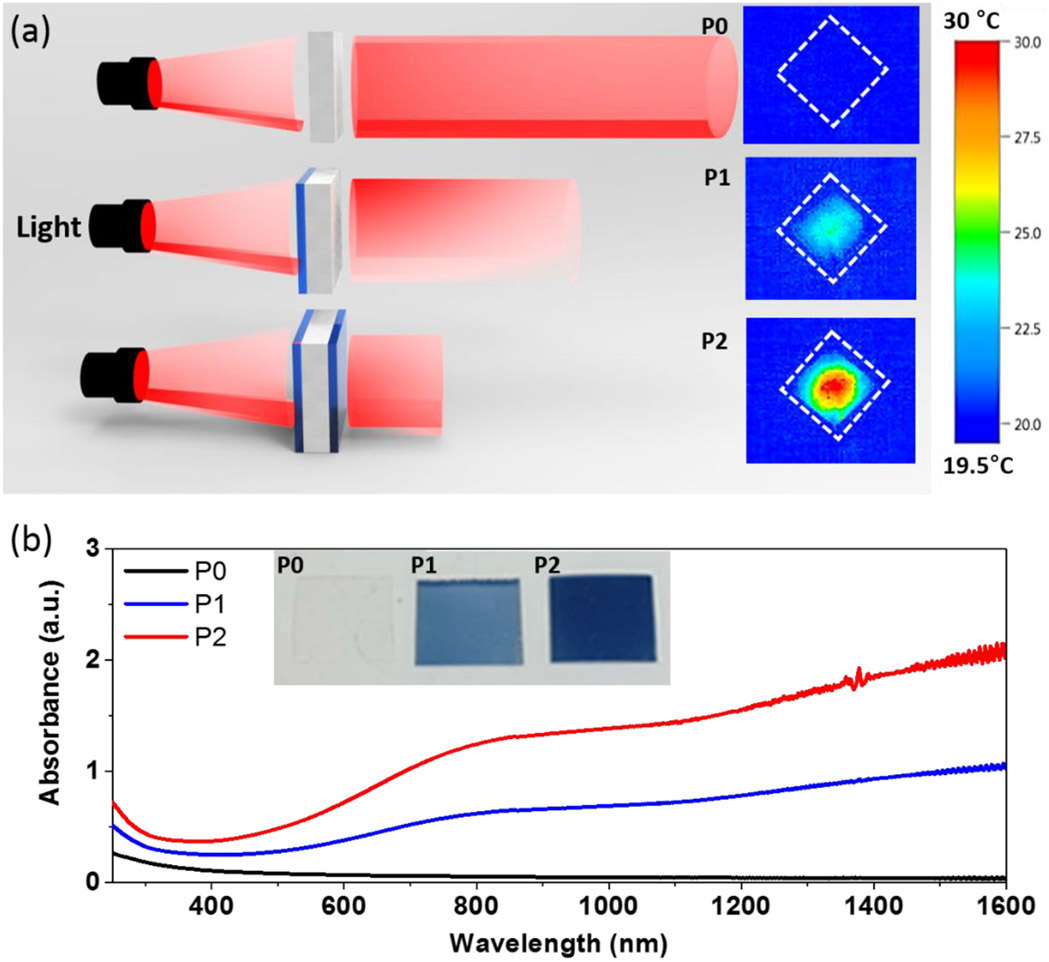 Pyroelectric devices typically use metallic electrodes due to their high conductivity, but metallic electrodes also reflect input light (see Figure 3). On the other hand, PEDOT electrodes absorb light transmitted through a DSSC without much reflection, and generate heat through photothermal conversion of otherwise wasted input light. We then use the heat generated by the photothermal conversion in the PEDOT electrodes to generate pyroelectric output, and a thermoelectric device attached below the pyroelectric film converts unused heat into electricity. Figure 3(b) and (c) shows that output energy from the thermoelectric device depends on light intensity. 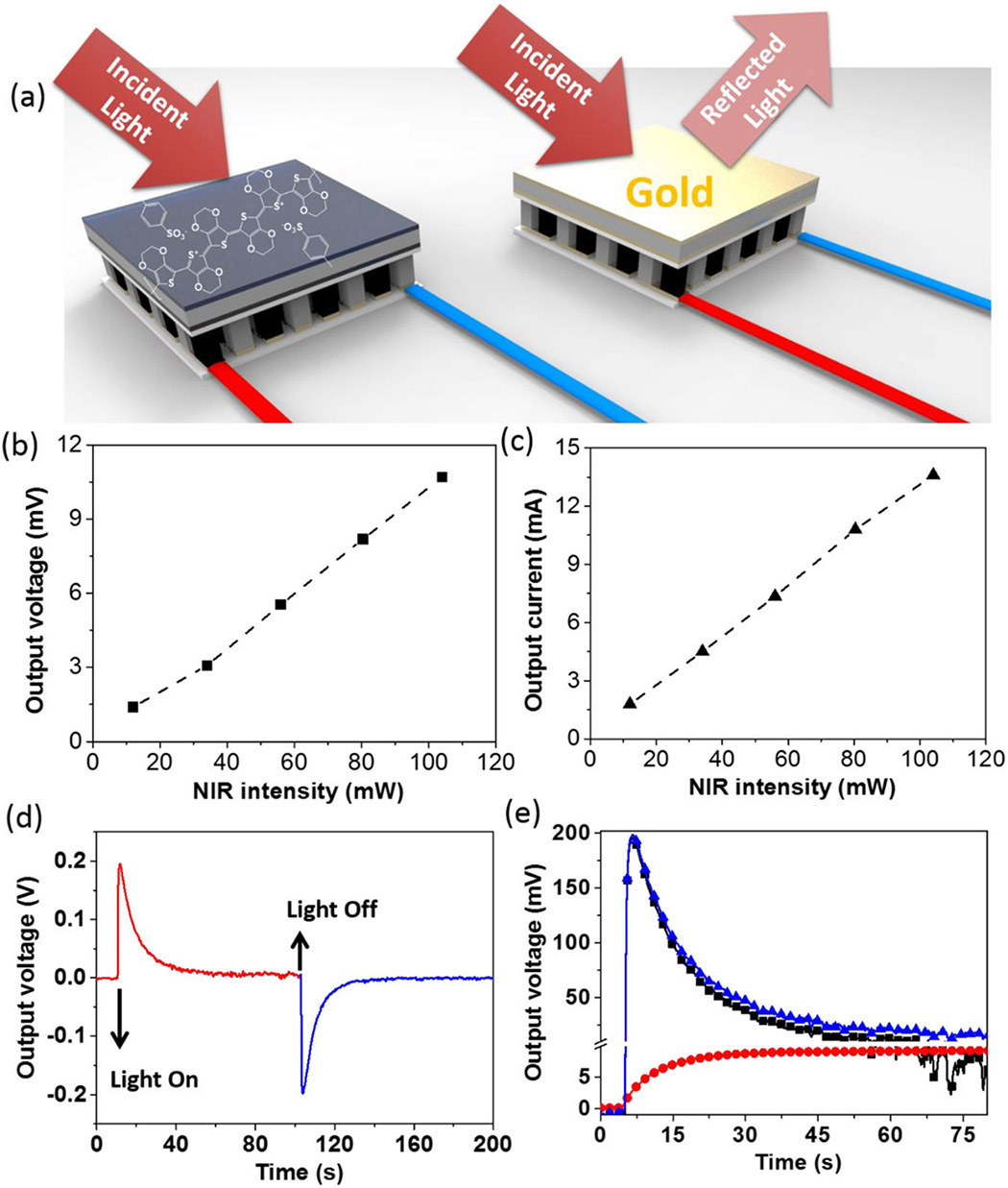 Figure 4(a) shows the hybrid harvester structure in detail. We sandwiched the photothermal/pyroelectric film device between a DSSC and a thermoelectric module. Figure 4(b) shows the photocurrent density-voltage (J-V) curve of the hybrid device, including a series-connected photovoltaic cell. We confirmed the photothermal effect from the enhanced photoconversion efficiency (PCE), which was 15–20% higher than that of the DSSC only. In addition, higher light intensity led to a higher temperature gradient and a PCE increase of 41.3%: see Figure 4(c). 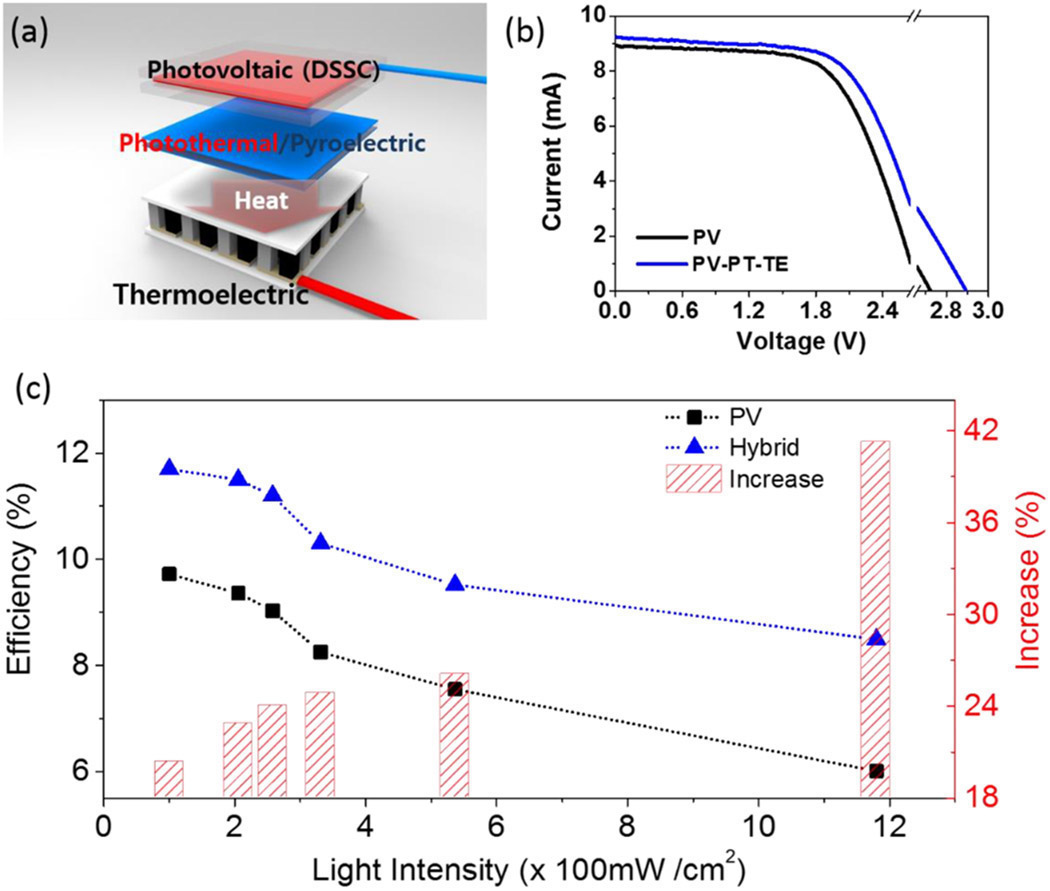 Hybrid energy conversion based on multilayering of PEDOTs provides a deeper understanding of energy harvesting mechanisms and a method for boosting efficiency in a simpler structure. Our next step is to build a self-powered smart window system using the hybrid energy harvester. The photothermal polymer film is essential for converting wasted light into a useful heat source, and we anticipate that the output voltage and energy conversion efficiency would be enough for an electrochromic window. An integrated system of window, energy harvester, energy storage, switching, and circuits will be further optimized to decrease energy loss by the integration. A further challenge is to achieve a flexible self-powered smart-film device out of these efforts.

Eunkyoung Kim has been a professor at Yonsei University since 2004.