DC currents can be generated in unbiased dielectrics and semiconductors by excitation below their band gaps with ultrashort optical pulses.

Nonlinear optical phenomena involve optical fields with different frequencies that combine to generate an optical field with a new frequency. For example, in difference-frequency generation (DFG) photons of frequency ω1 and ω2 combine to produce photons of frequency ω1–ω2. At the ultimate limit of DFG—optical rectification (OR)—two photons of identical frequency combine to produce a DC electric field in nonlinear crystals, such as lithium niobate or potassium titanyl phosphate.1 The production of contactless miniaturized sources of voltage is enabled because OR generates DC electric fields. However, for many purposes, such as testing electronic circuits, it is desirable to have a contactless source of current rather than voltage.

In general, no DC current can be generated in the absence of a bias voltage by linearly polarized monochromatic light. However, the nonlinear interaction of two photons, of frequency ω, with one photon, of frequency 2ω, can generate a DC current in an unbiased semiconductor such as gallium arsenide. Here, the phase relation between the incoming electromagnetic waves could change the direction of the current.2 This effect is called coherent photoinjection and was first observed only when the energy of the photon, of frequency 2ω, exceeded the band gap of the semiconductor and the light was absorbed.

In OR, the photons are well below the absorption edge, no carriers are generated, and the voltage rises and falls instantly following the optical pulse, but in coherent photoinjection the current persists. In 1995, I predicted that instant DC currents could be generated by coherent light that is well below the band gap of a semiconductor or dielectric.3 However, this effect is weak and, unsurprisingly, for two decades it remained speculative.

In 2013, experiments4 revealed that when near-IR optical pulses, with a duration of a few femtoseconds, were incident on a polished quartz crystal placed between two electrodes, a small DC current flowed between the electrodes (see Figure 1). The energy of the incoming photons was many times less than that required for their absorption by quartz. At the time, it was assumed that this photocurrent was the result of reversible changes in the nature of quartz, i.e., a transition from an insulating to a metallic phase. 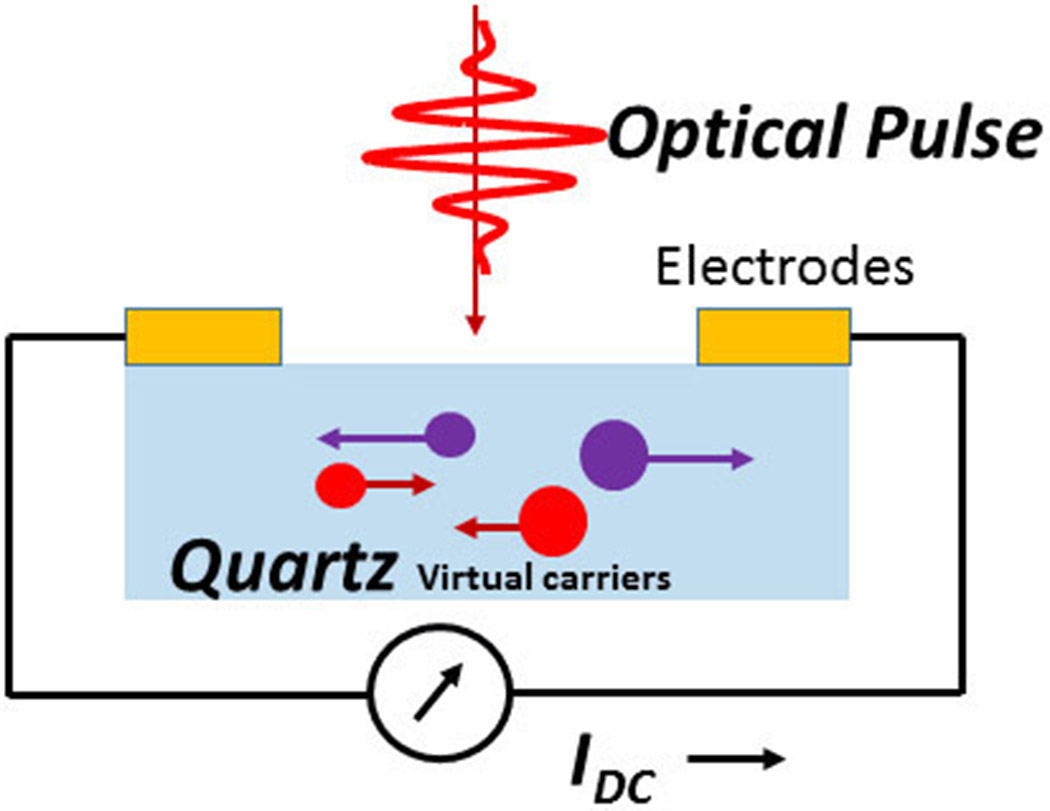 Figure 1. In the photogeneration of DC current (IDC) by ultrashort optical pulses in an unbiased quartz crystal,4 virtual electrons (purple) and holes (red) are generated.

I have recently discovered, however, a simple alternative explanation of the photocurrent that was observed.5 In my approach, I solved a set of equations that describe the interaction between an ultrashort optical pulse and a dielectric or semiconductor. An oscillating current pulse, with a shape that was proportional to the cube of the optical field strength, was generated inside the dielectric. When the current decreased to zero after the pulse, the integral over time of the current (i.e., the electrical charge) was non-zero. The total charge increased as a cube, or higher power, of the optical field strength, and showed remarkable agreement with the experimental results (see Figure 2). The short optical pulses contained spectral components that covered broad ranges in the visible and near-IR regions. These pulses also interacted nonlinearly with the states in the valence and conduction bands of the dielectric. This coherent interaction produced virtual electrons and holes in the sample, and an imbalance between the numbers of carriers propagated forward and backward resulted in generation of a DC current. 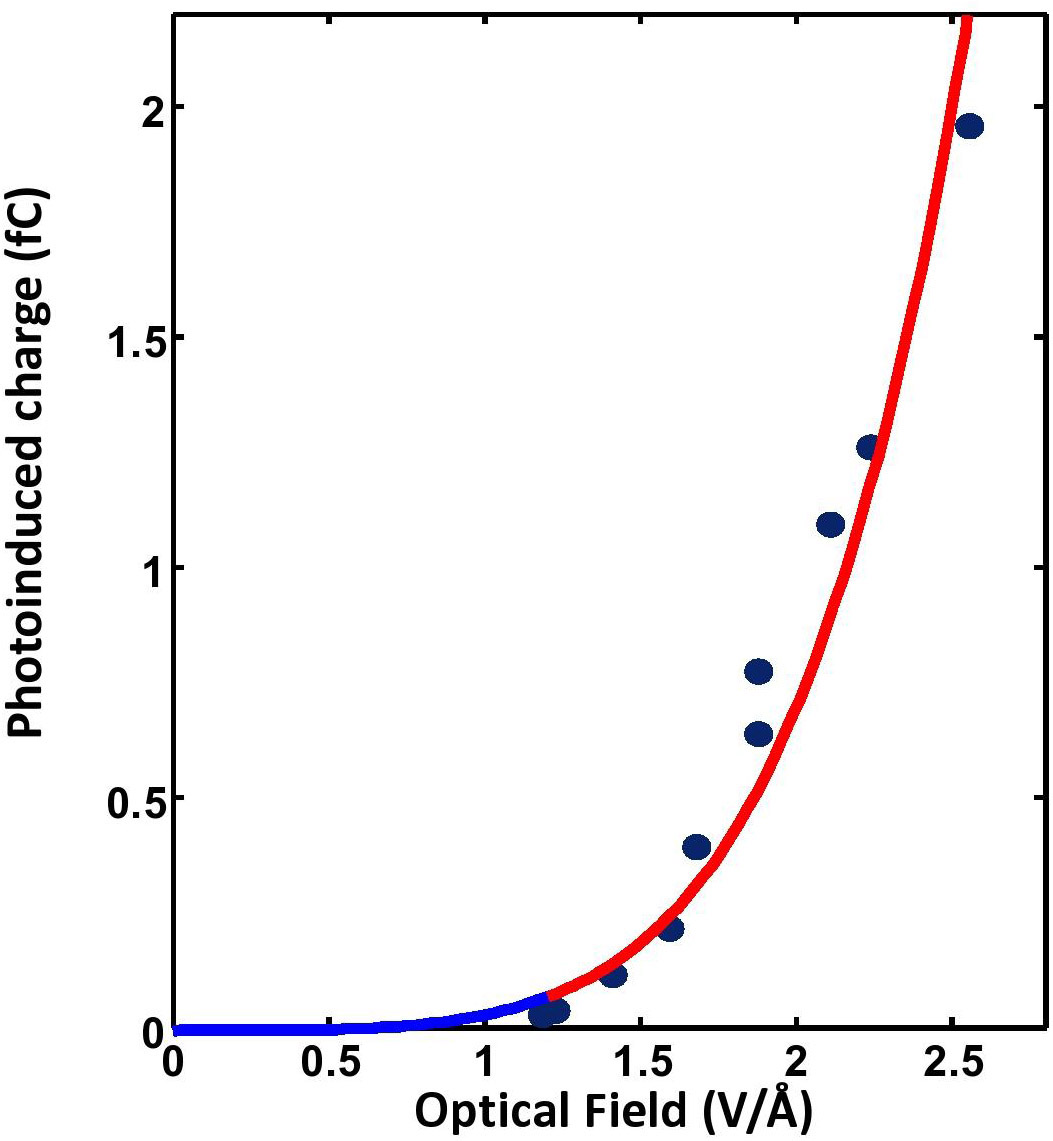 Figure 2. Calculations5 of the magnitude of the photoinduced charge, in femtocoulombs (fC), as a function of the optical field strength, in volts per angstrom (blue/red curve), fit well with experimental results (black circles).4 In the blue region of the curve, the charge is proportional to the cube of the optical field strength and in the red region it is proportional to the fifth power.

In other words, this physical explanation is precisely the classical nonlinear optical effect that I predicted in 1995,3 and does not require dramatic changes in the properties of the dielectric. It is therefore possible to generate ultrafast sources of current in a dielectric or semiconductor without any electrical contact. What makes this effect interesting is that the magnitude of the photoinduced current is proportional to a combination of odd-numbered powers of the peak electric field strength of the pulses. Depending on the length of the pulses, the current can be described as mainly exhibiting third-power, fifth-power, or higher-power nonlinearity.

In summary, the clear physical picture5 of the origin of photoinduced DC currents described here shows that ultrafast nonlinear optical phenomena are more versatile than previously thought. For example, the generation of DC current in this way will enable ultrafast measurement in nanoscale optoelectronic materials and devices. Such measurements would require no external sources of current or voltage and hence no contacts. In future research, I intend to focus on identifying the optimal conditions for improving this technique, by increasing the size of the generated DC current and further reducing its duration.

Jacob Khurgin has been a professor of electrical and computer engineering at The Johns Hopkins University since 1988. He is the author of more than 300 refereed papers and six book chapters, and he holds 32 US patents. He is a fellow of the American Physical Society and the Optical Society of America.