Rogue waves: will a forecast ever be possible?

Rogue waves are ocean waves that exceed the average wave height by a factor of two or larger. Even though they are rare, they can be extremely damaging in a severe storm: they appear to come out of nowhere, and there is yet no way of issuing a warning in due time.1, 2 In 2007, a research team found experimental evidence for rogue waves in an optical system: pulses of light with statistics similar to those of ocean rogue waves.3 Moreover, the mathematics of both optical and ocean rogue waves is similar since variants of an identical equation, the nonlinear Schrödinger equation, rule the dynamics in both systems. Nevertheless, it is not clear how useful this analogy is to the average ship captain given that prediction of ocean rogue waves still seems impossible. In fact, it is not yet clear whether rogue waves are predictable at all.

To clarify the issue of predictability of rogue waves, we used the statistical technique of nonlinear correlation analysis.4 This technique measures the similarity between short segments in a measured time series of a physical quantity, such as the wave height or the optical intensity. In this analysis, we focus on nearly similar segments, which consequently show strong correlation. The key question is whether nearly identical temporal sequences appear more frequently than when a completely stochastic mechanism rules the system. In other words, are there ‘déjà-vus’ in the time series? Do certain temporal patterns appear over and over again, much more frequently than in random time series? To evaluate this question in an unbiased way, we have to generate surrogate time series, which are random-scrambled copies of the original time series. Surrogates are indiscernible from the original concerning all aspects of linear descriptive statistics, including histograms and spectra. However, the use of true random number sequences for the scrambling algorithm destroys the nonlinear correlation in the surrogates.

We applied this method to three different experimental data sets. One of these is the original wave-height measurement recorded from the Draupner platform in the North Sea on 1 January 1995 (the first-ever measured rogue-wave event). The other two are records of pulse energies measured in two highly nonlinear optical scenarios. In both these systems, we convert relatively monochromatic light into a white-light continuum, which includes a rainbow of colors. One of these rogue-wave scenarios appears during propagation in optical fibers,3 and another during multiple optical filamentation.5 All data sets show similar statistics and are ruled by variants of the same equation, so we would anticipate that either they are all predictable to some extent or none of them is. However, we were surprised to find this is not the case. While the data set of fiber optical rogue waves showed no predictability at all, both other systems did show clear indications of predictability. At second glance, the difference between the systems is not that unexpected: quantum fluctuations rule the physics behind the fiber rogue-wave scenario, whereas hydrodynamics rules the other two systems. Since quantum fluctuations are truly random, it does not help to have a deterministic equation, such as the nonlinear Schrödinger equation. This expression only conveys input fluctuations to the output and tends to further magnify the initial quantum noise.

In contrast, the ocean-rogue-wave data is deterministic and bears some degree of predictability. However, the prediction time in the ocean scenario is very low and amounts to a few tens of seconds in the most optimistic estimations. Therefore, ocean rogue waves are, in principle, predictable. But given the fairly limited prediction times, a ship captain's impression of rogue waves coming out of nowhere appears plausible. Advanced warning of an individual rogue wave may turn out to be a futile approach and may simply not be possible.

In conclusion, our study highlights the need to dedicate more attention to input fluctuations. The mechanics of rogue-wave supporting systems are always ruled by a deterministic equation, which we can easily solve. Yet too little thought has been put into the input to this equation. While for the optical fiber scenario, the quantum-mechanical origin is well understood, in the case of the ocean, most studies have neglected winds, which drive almost all waves: see Figure 1. The influence of wind direction on ocean rogue waves is a topic to consider in future work. In the end, the answer to the ocean-rogue-wave mystery may be blowing in the wind. 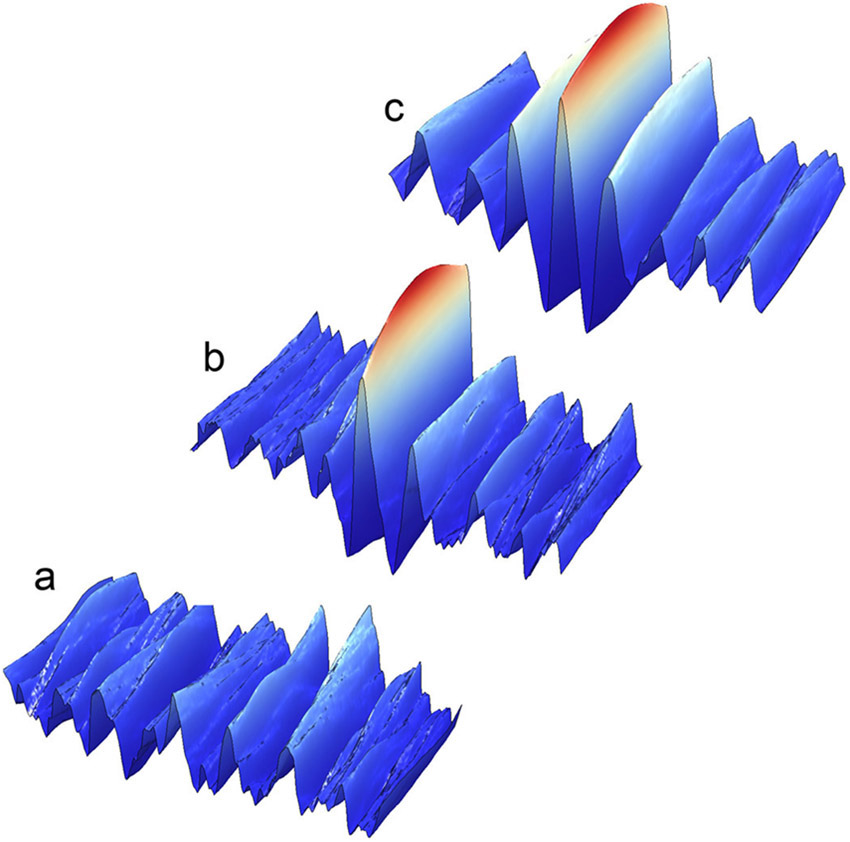