Sensitive and selective detection of trace amounts of explosives is of utmost importance for national security. There has been a sharp increase in recent years in the number of terrorist activities using improvised explosive devices, and the destructive power of these has grown exponentially. Tragedies like the Boston Marathon bombing could in future be prevented—or the extent of their damage mitigated—through the wide deployment of low-cost microsensors that detect trace amounts of explosive vapors in the environment, and issue warnings accordingly.1, 2

Currently, microsensors are developed using chemoselective interfaces, but these are challenging to fabricate, most notably for reusable sensors that operate at room temperature. Responses from a sensor with immobilized chemoselective interfaces often show interference due to the presence of other similar molecules.3 Finding a chemical interface or receptor that is highly selective of target molecules and prevents non-specific adsorption of background molecules is difficult. To overcome this selectivity issue, developers can analyze responses from arrays of sensors that have different chemoselective interfaces, and apply pattern recognition techniques for molecular identification.4 However, achieving high selectivity fails when more than three different trace chemicals are present in sample mixtures that have highly asymmetric mass ratios.5

To address this problem, some research groups have explored a new approach that exploits the selectivity of optical spectroscopy as well as the sensitivity of micro/nanoelectromechanical systems (M/NEMS).6–9 Traditional IR spectroscopy is well known for its selectivity in recognizing different chemical compounds, but suffers from low sensitivity. Combining this technology with highly sensitive M/NEMS has, over the past decade, enabled exceptional performance in detection, quantification, and identification of trace amount of explosives.9–12 However, real-life application of these devices is still limited by their sensing performance when complex vapor mixtures generate false-positive or false-negative signals.

To improve this approach, we have developed a multimodal sensing system for explosive vapors that uses a microthermometer/microheater device (see Figure 1) and a widely tunable quantum cascade laser.13, 14 We have designed, fabricated, and tested a microthermometer/microheater device that responds to the heat generated by non-radiative decay processes when the adsorbed explosive molecules are resonantly excited with IR light. Monitoring the variation in microthermometer signal as a function of the illuminating IR wavelength corresponds to the conventional IR absorption spectrum of the adsorbed molecules. In addition, using this same device we have successfully performed micro-differential thermal analysis, which we may use to differentiate the exothermic or endothermic reactions of heated molecules, thus providing additional orthogonal signals for trace explosive detection and sensor surface regeneration. 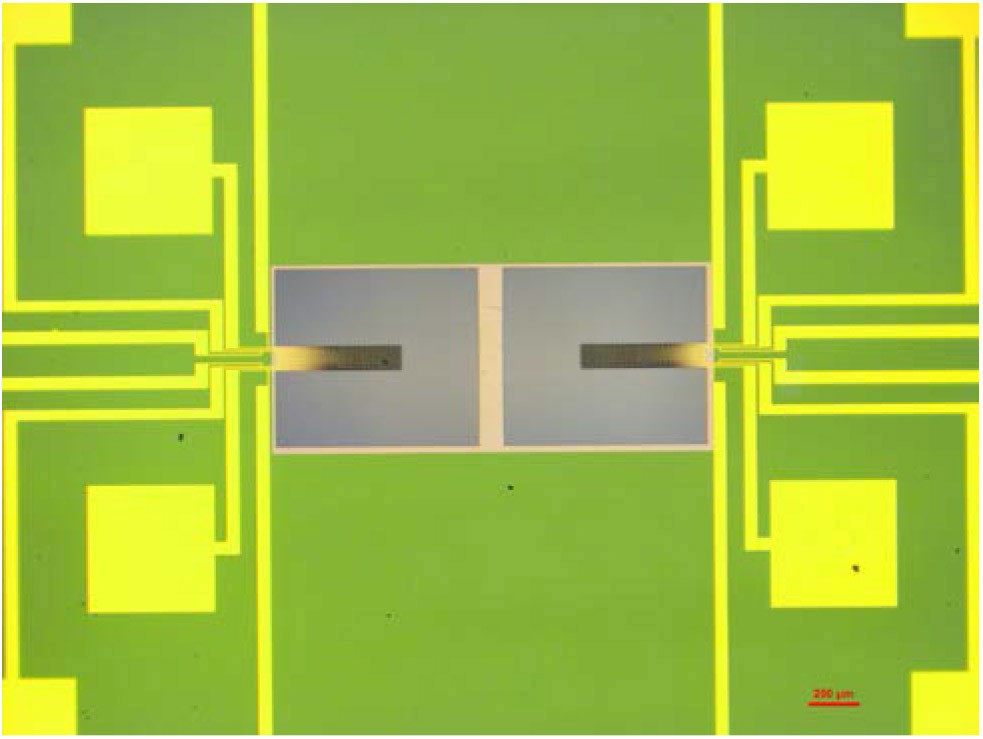 We have shown the successful detection, differentiation, and quantification of trace amounts of explosive molecules and their mixtures, such as cyclotrimethylene trinitramine (RDX) and pentaerythritol tetranitrate (PETN), using two orthogonal sensing signals that improve chemical selectivity and reduce the probability of a false alarm. The limits of detection of our device with the optocalorimetric IR spectroscopic technique were 31 and 49pg for RDX and PETN, respectively. Moreover, the limits with the micro-differential analysis technique for RDX and PETN were 38 and 24pg, respectively. In addition, the sensor surface was easily regenerated after each explosive or non-explosive sensing by applying rapid heating pulses, which allows multiple uses of the device in a short time frame.

In summary, we have developed a highly reusable, multi-modal sensor for explosive vapors that has good chemical selectivity and lowers the rate of false alarms. To further enhance the sensitivity and selectivity of our microelectromechanical systems (MEMS) devices, we are currently working to design and integrate a compact micro preconcentrator (μPC) in the same chip to achieve higher vapor collection efficiency for our target explosive vapors. We are also making nanostructures on the surface of our MEMS devices to increase the surface-to-volume ratio of the sensor. In addition, we are exploring more orthogonal signals for integration to reduce false alarms based on electrochemical sensing principles.

Seonghwan Kim is an assistant professor and Tier II Canada Research Chair in nanosensing systems in the Department of Mechanical and Manufacturing Engineering.