Single-mode ytterbium-doped fibers for 3kW lasers and beyond

Intense recent research has focused on power scaling for fiber lasers and amplifier systems that have diffraction-limited beam quality and that operate in the 1μm wavelength region.1 Several applications require such high power levels, but since 2010, power scaling of single-mode fiber laser systems has made limited progress. This lack of progress has been because of mode instabilities (MIs), i.e., a new type of limitation, where above a certain power threshold the fundamental mode exchanges energy with higher-order modes on a short time scale, and thus destabilizes the beam profile.2, 3

The MI effect has been observed in all high-power systems, independent of the type of active fiber used (e.g., step-index photonic-crystal fibers and rod-type photonic crystal fibers).2–5 Recent experiments6 have shown that a driving cause of the effect is the average heat load. This arises mainly from losses induced by photodarkening (the phenomenon of transmission losses from absorption or scattering in transparent media) and the quantum defect of the laser process (the ratio of the energy of the pump photon to the laser photon, where the difference is transferred as heat).

Based on the rules for photodarkening in ytterbium-doped fibers, we have adapted our in-house fiber fabrication process for low-numerical-aperture (NA), low-photodarkening fibers by reducing the ytterbium ion concentration. Our resulting fibers have a core diameter of 22.5μm and a pump core of diameter 450μm. We used these fibers in a high-power setup that enables single-mode output at 3.3kW average power with a beam quality factor (M2)<1.3. In addition, our laser output was not limited by mode instabilities.

We used a modified chemical vapor deposition process, and solution doping of aluminum and ytterbium, to produce a single, presintered phosphorus-doped silicon dioxide layer for our fiber preform. Phosphorus co-doping is known to reduce photodarkening,7 and is therefore advantageous for raising the MI threshold. In addition, when aluminum and phosphorus dopants are mixed equally, they exhibit an unusual behavior that results in a nearly unaffected refractive index.8 Our fabricated core—with doping concentrations of about 1mol% phosphorus, 1mol% aluminum, and 0.1mol% ytterbium—provides a low NA of 0.04 and a core of diameter 22.5μm. We chose an octagonal pump core of diameter 450μm, which resulted in a pump absorption length of 30m at a wavelength of 976nm. This relatively long length also enabled a low heat load per meter.

To prove the applicability and performance of our fiber design, we used a backward-pumped amplifier setup. The seed was a narrow linewidth fiber-amplified external cavity laser, which we phase-modulated before amplification (to 170pm) to suppress stimulated Brillouin scattering. This bandwidth is adapted to applications such as spectral beam combining.9 The seed power was 10W, which was coupled in free space to the core of the main amplifier. The pump source was an industrial laser diode that provided temperature-stabilized emission at about 976nm. The output characteristic, which featured a very good slope efficiency of 90%, is shown in Figure 1. 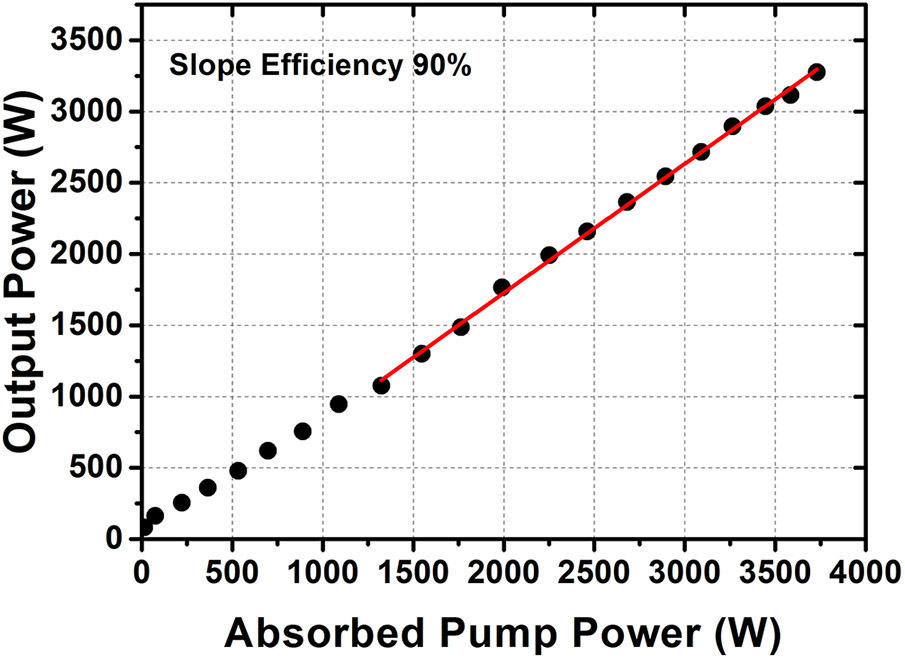 To further prove that the output power of our fiber is not limited by mode instabilities, we directed a fraction of the output onto a photodiode for proper characterization.10 The relative standard deviation of the photodiode signal, with respect to the output power, is shown in Figure 2. These results show no evidence of MIs. The beam quality measurement is also illustrated in Figure 3. This measurement is independent of the output power. Finally, we used an optical spectrum analyzer with a high dynamic range to measure the spectrum. We found no sign of stimulated Raman scattering or amplified spontaneous emission, down to a level of −80dB (see Figure 4). Our results therefore indicate that further power scaling of fiber lasers is possible. 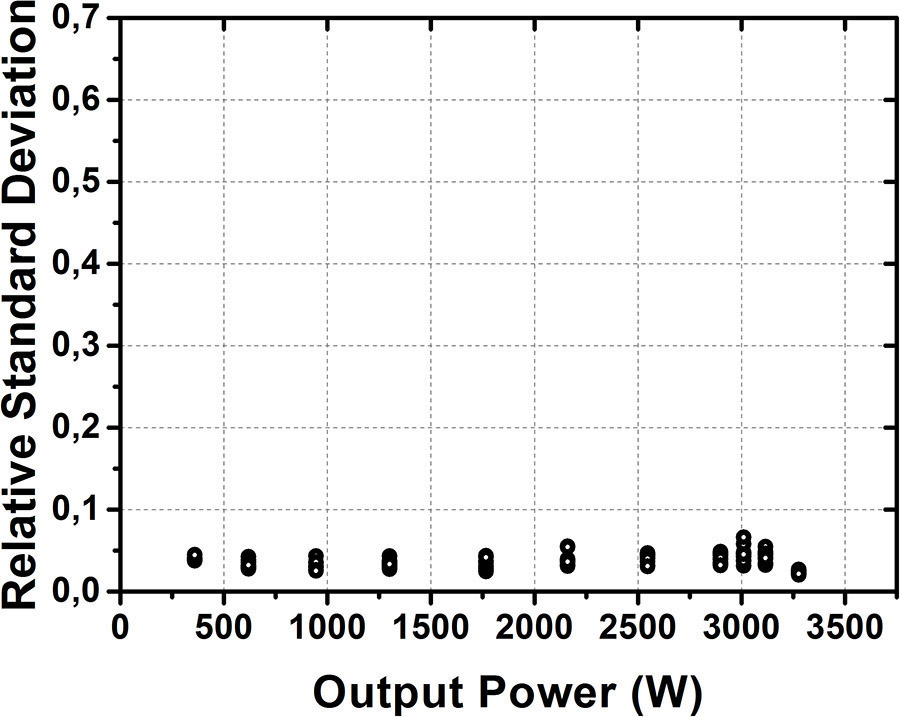 Figure 2. Evaluation of the photodiode signal. There is no evidence of mode instabilities. 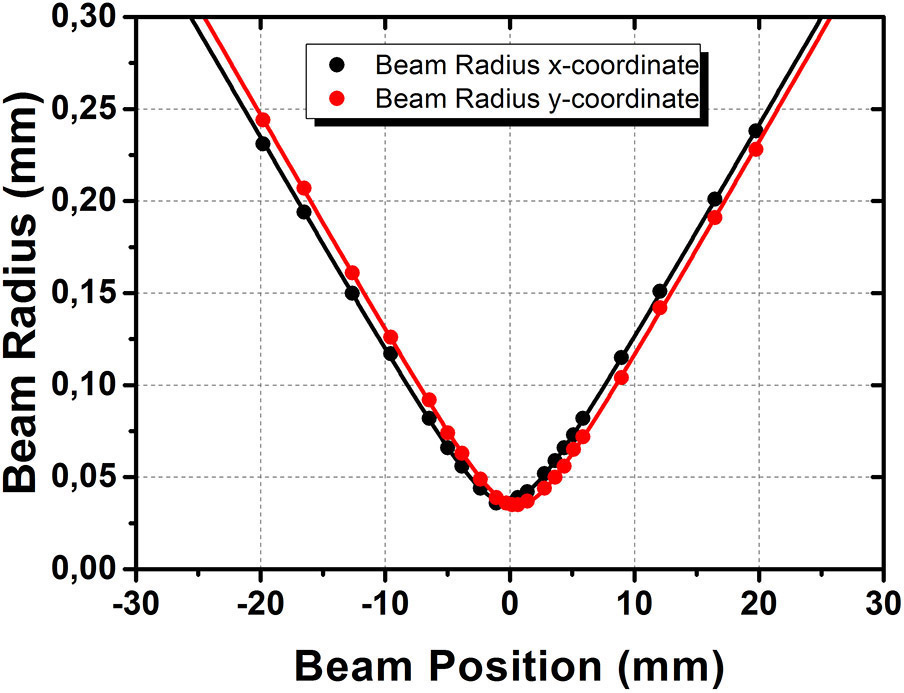 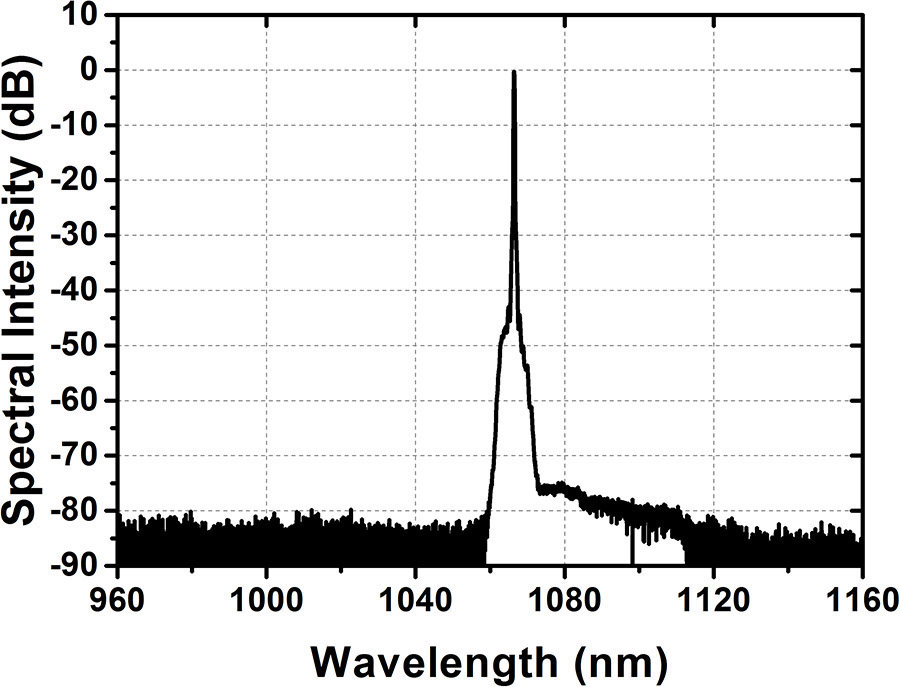 Figure 4. Spectral measurement at an output power of 3.3kW. Measurement was made using an optical spectrum analyzer with a high dynamic range. dB: Decibels.

In summary, we have gained an in-depth understanding of the origin of mode instabilities and have explained the possibilities for engineering ytterbium-doped fibers. We have thus realized fibers that are capable of producing 3kW of power or greater. Furthermore, our fibers are not yet limited by mode instabilities or inelastic scattering for continuous wave, narrow linewidth radiation. In future work we plan to apply our fibers in different laser systems to further increase their power.

This work is partly funded by the Federal Ministry of Education and Research within the project TEHFA II (contract FKZ 13N13652).