Optical diodes (or isolators) are devices that allow light to propagate in only one direction and block light propagation in the opposite direction.1 Such devices are indispensable tools in all laser systems because any feedback from the laser output can cause damage or lead to emission instabilities. Commercial optical isolators that rely on the Faraday rotation effect, however, are bulky and incompatible with on-chip integration.1 Although several novel concepts have been proposed for building integrated photonic isolators,2–7 a practical implementation that meets market standards is still elusive.

Inspired by some recent progress in condensed matter physics, photonic structures with eigenspectra that exhibit topological properties have lately attracted considerable attention.8–13 These topological photonic arrangements can support defect states that are protected against certain types of disorder. Topology is a branch of mathematics that deals with the global features of objects rather than their geometrical details.14 For example, a sphere and an ellipsoid are topologically equivalent because they can be deformed smoothly into one another without tearing or gluing. On the other hand, a sphere and a torus are topologically different (see Figure 1).

Figure 1. A sphere and an ellipsoid are topologically equivalent since they can be deformed into one another without tearing or gluing. Conversely, neither the sphere nor the ellipsoid are equivalent to a torus.

In a recent study,15 we conducted theoretical and numerical investigations that showed it is possible to use a special type of 1D topological waveguide array to design and build on-chip optical diodes. The results of our work indicate that the proposed device can exhibit large bandwidth and a high isolation ratio (the ratio between backward and forward transmission). Progress such as this is crucial in the development of next-generation photonic chips that operate at ultra-high speeds.

In particular, we considered a special class of 1D photonic systems that emulate the so-called Su-Schrieffer-Heeger (SSH) Hamiltonian16 (shown schematically in Figure 2) and thus possess a non-trivial topological order. While an infinite SSH array exhibits two bands that are separated by a bandgap,16 a semi-infinite SSH array that is terminated at the weak coupling bond can support a topological mid-gap defect state, which is localized at the edge. The topological nature of this localized mode means that it is insensitive to off-diagonal perturbations that alter the coupling coefficients, as long as they do not close the bandgap. The modal amplitudes of this defect state decay exponentially within the array and vanish inside the even-numbered waveguides (see Figure 2).

Figure 2. Schematic illustration of a semi-infinite Su-Schrieffer-Heeger (SSH) Hamiltonian array and its defect mode profile. Cubes represent the array elements (waveguides, cavities, or quantum wells). The distance between the elements can be adjusted to produce an alternating weak and strong coupling profile (represented by the weak, κw, and strong, κs, coupling coefficients, respectively). The array is terminated with a weak bond at the left edge to create a mid-gap edge defect state that is topologically protected. The amplitudes of the defect eigenstate drop exponentially within the array and vanish inside the even-numbered waveguides, as illustrated by the haloes.

Interestingly, most of the features of infinite and semi-infinite topological arrays persist even for finite structures, as long as the array size is larger than the defect state localization length. This is partially due to the chiral symmetry of the finite structure.16 In our study, we therefore considered an arrangement of seven identical (except the leftmost one) coupled waveguide channels (see Figure 3) with alternating weak and strong coupling coefficients. We also assumed that a magnetic garnet film was deposited on only the first (leftmost) ridge waveguide. The other waveguide channels were assumed to have non-magnetic cover layers that were index-matched to the magnetic garnet. Alternatively, we could have adjusted the dimensions of these waveguide channels so that they matched the propagation constant of the leftmost channel in the forward propagation direction. Such a configuration may be achieved through the use of radio frequency magnetron sputtering or pulsed laser deposition together with standard photolithography. A schematic illustration of our structure is depicted in Figure 3(a), where only four of the seven guiding channels are shown. 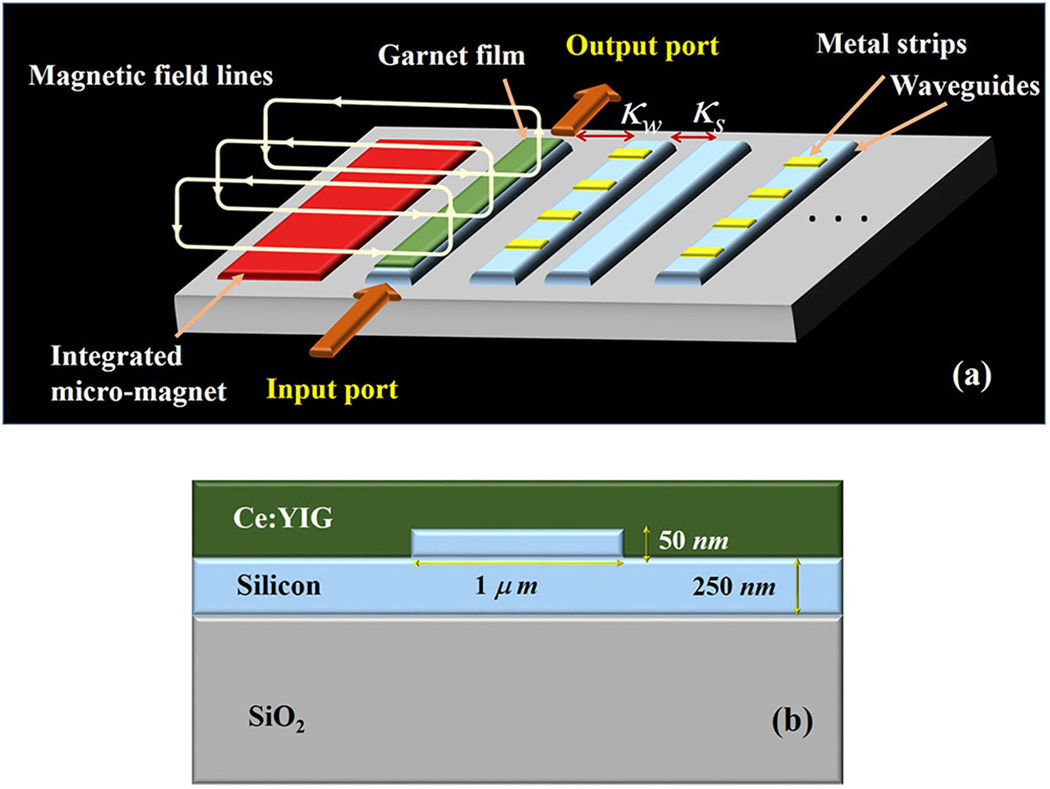 Figure 3. (a) Schematic diagram of the investigated topological isolator array. This structure consists of seven waveguide channels (only four are shown) arranged according to the SSH model. Non-reciprocity is introduced by depositing a garnet film on the leftmost waveguide and by applying an external DC magnetic field. Losses that are added to the even-numbered waveguides by depositing metal films (yellow stripes) can enhance the non-reciprocal effects. The external magnetic field can be created by integrating a micro-magnet on the same chip.17The separations between the strongly and weakly coupled waveguides are 1.97 and 2.42μm, respectively. κs equals 35cm-1 and κw equals 0.2κsat a central wavelength of 1.55μm. (b) Illustration of the leftmost waveguide used in the structure. The other waveguides have a similar structure, but with a non-magnetic index-matched cover layer. Ce:YIG: Cerium-doped yttrium iron garnet. SiO2: Silica.

When an external magnetic field is applied in the transverse direction, the leftmost waveguide in our structure exhibits different propagation constants for the forward and backward directions. This, in turn, has an effect on the collective modes of the whole system. In particular, for a proper design of the edge channel and applied field, we can engineer the defect state to remain localized and lie in the middle of the bandgap during forward propagation. Conversely, the corresponding backward propagation state is shifted toward one of the bands and its field profile spreads out over the entire structure: see Figure 4(a). Consequently, an optical beam launched in the edge channel experiences different propagation dynamics in both directions: there is localization in the forward direction, where most of the input power (92% in our design) exits from the same channel; and diffraction in the backward direction, where only a small fraction of the reflected power couples to the same waveguide. 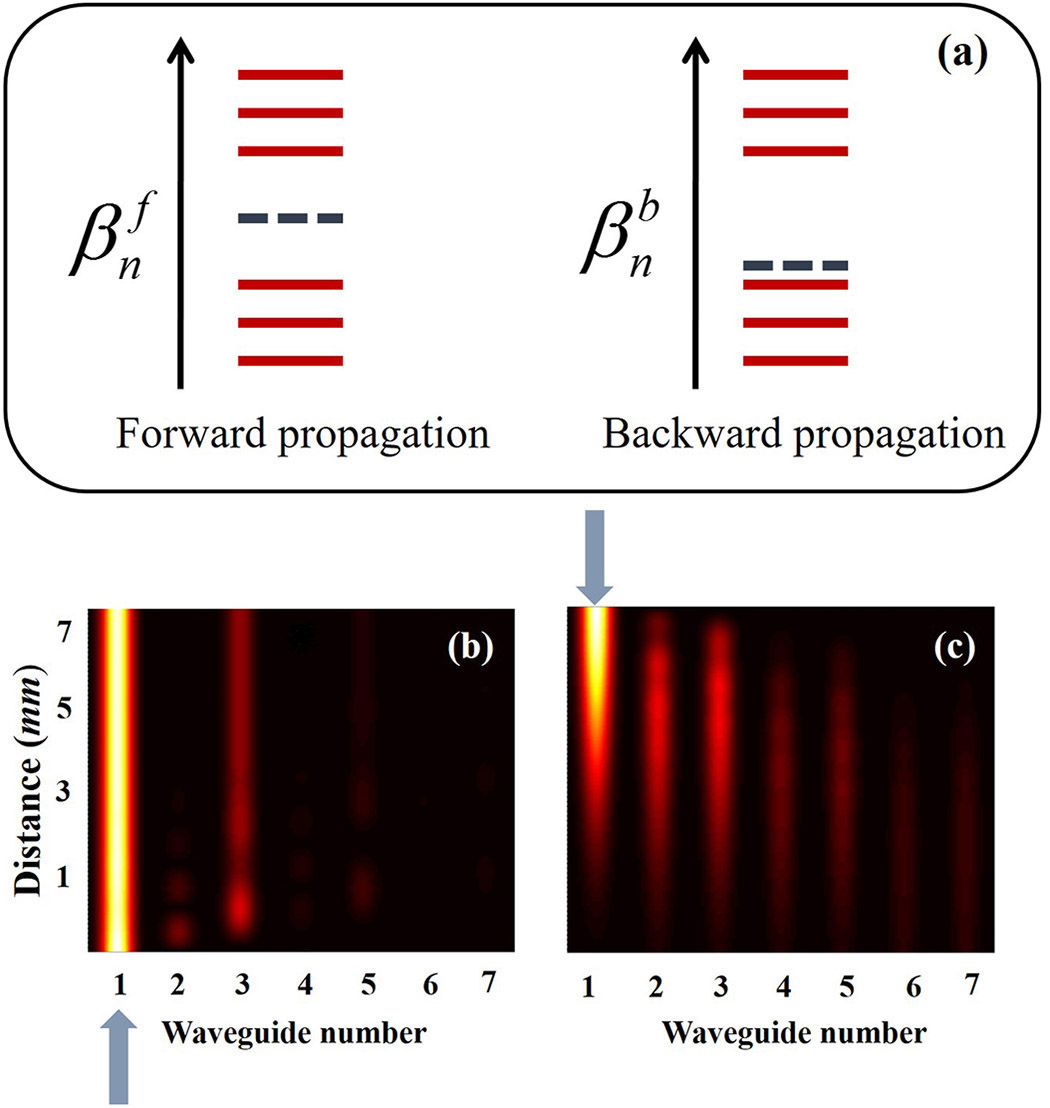 The results of our analysis show that carefully optimized metallic absorbers can be added on top of the even-numbered waveguides to ‘kill’ the backward optical power completely in our device. From the results of our simulations, we predict that a large bandwidth of operation (tens of nanometers) and high isolation ratios (–50dB)—as illustrated in Figure 4(b) and (c)—can be achieved. Moreover, all the necessary fabrication steps for our device are relatively standard, and the whole structure can be implemented on a silicon photonics platform.

In summary, we have proposed and theoretically demonstrated a new concept for building on-chip optical diodes that are based on a 1D topological SSH waveguide array. Topological photonics is a new field of research, with several revolutionary concepts and potential applications. Our next step is to further optimize the operation of our proposed optical isolator, by using other novel concepts (e.g., supersymmetry transformations). Moving to the experimental phase of this project will also be an important step that may provide practical, passive, silicon-compatible photonic isolators—with large bandwidths of operation and high isolation ratios—for the first time. Our proposed device, therefore, has the potential to replace bulky commercial isolators, which in turn may enable the realization of fully integrated photonic chips that can operate at unprecedented speeds. Finally, we also plan to investigate other possibilities for building practical devices, such as power and polarization splitters that are based on topological arrangements.

Ramy El-Ganainy obtained his PhD from the College of Optics and Photonics at the University of Central Florida in 2009. He then joined the Department of Physics at the University of Toronto, Canada, as a research fellow. Between 2012 and 2013 he was a research scientist at the Max Planck Institute for the Physics of Complex Systems, Dresden, Germany, and was then appointed to his current position as assistant professor in 2013. His research interests span a wide range of topics, including integrated optics, nonlinear photonics, and non-Hermitian lightwave dynamics.

Miguel Levy is professor of physics and materials science. He is also a Fellow of the Optical Society. His research currently centers on nonreciprocal photonics and nano-magneto-photonics.