Remote sensing for crop cultivation: From research to industry

Wheat is the most widely cultivated crop worldwide and (along with maize and rice) is key to providing calories, particularly protein. With the human population increasing upward of 9 billion in the coming decades, wheat production will need to increase to meet the higher demand. One obstacle to achieving this is the need to maintain productivity and wheat protein content while also reducing the use of mineral nitrogen fertilizers. Plant breeding to meet these aims has proved successful in improving numerous crop characteristics, but existing results show that the speed of improvement in wheat needs to increase significantly. Breeding is a very organized and science-intensive process of product development, which requires the creation of tens of thousands of variable plants by crossing diverse parents, and then selecting the very few individuals that show improved performance for multiple criteria, during successive years. Thus, the process is costly and time-consuming, and any technology that can help predict the performance of each genotype while reducing the cost and amount of testing greatly improves the overall rate of genetic gain.

In response to this problem, we have developed a prototype remote-sensing-based system used to characterize the response of wheat varieties to nitrogen. The setup is underpinned by the knowledge of nitrogen effects on wheat canopy characteristics, such as leaf area and angle, and chlorophyll content. These traits have been routinely measured and monitored over several years using remote sensing in satellite-based Earth observation systems. Now, miniaturization, lower costs, and access to computational power make these tools accessible and amenable to integration on simple vectors such as tractors and other agricultural vehicles. We installed RGB (red, green, blue) cameras and multispectral reflectance spectrometers on a tractor2 (see Figure 1), enabling us to screen the dynamic response of 220 wheat varieties to different nitrogen treatments (see Figure 2). Using this data, we showed that such systems can provide results relevant to the discovery of genes and their functions, and to screening for plant breeding.

Figure 1. The prototype phenotyping system mounted on a farm vehicle. 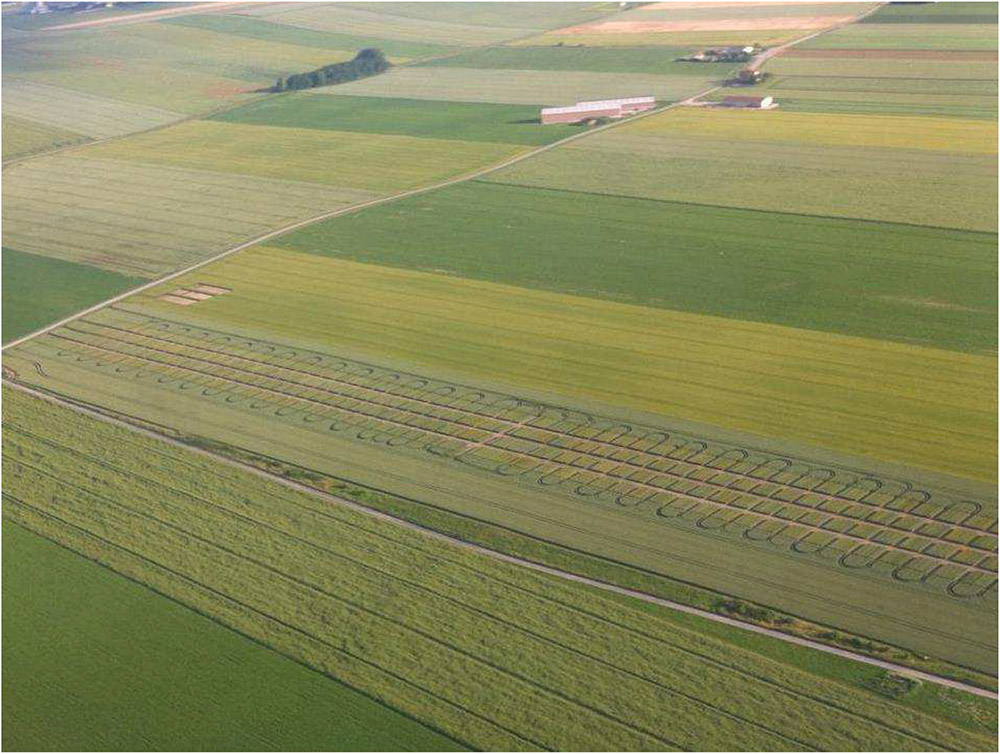 We identified aspects of the wheat genome that coherently affect canopy reflectance, chlorophyll content, biomass, and yield. We showed that these measurements are sufficiently repeatable and are well linked to the tolerance of some varieties to nitrogen deficiency. Hence, we were able to use reflectance traits at specific phases of the wheat crop to identify superior wheat varieties for nitrogen deficit tolerance. We incorporated additional sensors such as lidars, so that over three years, the system evolved from a technology readiness level (TRL)3 of three to six. We were then able to scale up the system from trials of around 100 plots to 1000, which helped us to specify new systems developed within the scope of Phenome, a plant phenotyping network based in France.4, 5 We implemented these prototypes on two vectors: an autonomous ground vehicle6 and an autonomous gurney.7 An airborne system, named AirPhen, is already available to plant breeders8 and is used for wheat, maize, and sugar beet to assess a wide range of relevant traits, including leaf rolling9 and leaf diseases.

In summary, our case study on the response of wheat varieties to nitrogen deficiency may enable a high-throughput phenotyping system adapted to field conditions that makes possible physiological measurements and extraction of useful genetic information. The prototype systems we have developed are attaining TRL levels sufficient to be deployed across multiple and varied field facilities, and should contribute to more widespread adoption of these technologies.10 Our future work will focus on application of our approach in a plant-breeding environment, which requires throughput to be increased by one to two orders of magnitude. Airborne systems such as AirPhen currently offer the greatest opportunity to realize this.

David Gouache is a crop scientist and is head of Biotechnology Programs. He is on the executive committee of the French plant phenotyping network Phenome and the French field crops biotechnology company Biogemma.