BATMAN and ROBIN: Space observation instruments based on micromirror arrays

Multi-object spectrographs (MOSs) are powerful tools for space and ground-based telescopes used in Earth and Universe observation and planet exploration. Using a programmable slit mask for astronomical object selection, MOSs are the major instruments for studying primary galaxies and remote, faint objects. However, in the newest generation of MOSs, object selection systems are limited and/or difficult to implement. To enhance their functionality, we can incorporate micro-optoelectromechanical system (MOEMS) devices, such as micromirror arrays, to enable remote control of a multi-slit configuration in real time. This approach offers a promising solution for Earth- and space-based observations. MOEMS are based on mature microelectronics technology, and are compact, scalable, and can be customized for specific tasks, including new functions not available with current technologies.1

We have developed a programmable micromirror array (MMA) known as MIRA, which can generate reflective slit masks for MOS applications. From previous simulation results and measurements, we determined several requirements for the new device. It must achieve a high optical contrast of 1000:1 (with a goal of 3000:1), and have a fill factor of more than 90% and a mechanical tilt angle greater than 20°. Furthermore, the mirror surface must remain flat in operation across a large temperature range, and must work at cryogenic temperatures. We successfully designed, fabricated, and tested an MMA with single-crystal silicon micromirrors of 100×200μm2 (see Figure 1). The arrays are composed of 2048 micromirrors (32×64) with a peak-to-valley deformation of less than 10nm, and a tilt angle of 24° for an actuation voltage of 130V.2 We successfully actuated the micromirrors before, during, and after cryogenic cooling down to 162K, and we measured the micromirror surface deformation at cryo at below 30nm peak-to-valley. Our concept involved placing the programmable slit mask at the focal plane of a telescope (at the entrance of the spectrograph) for astronomical object selection (see Figure 2). 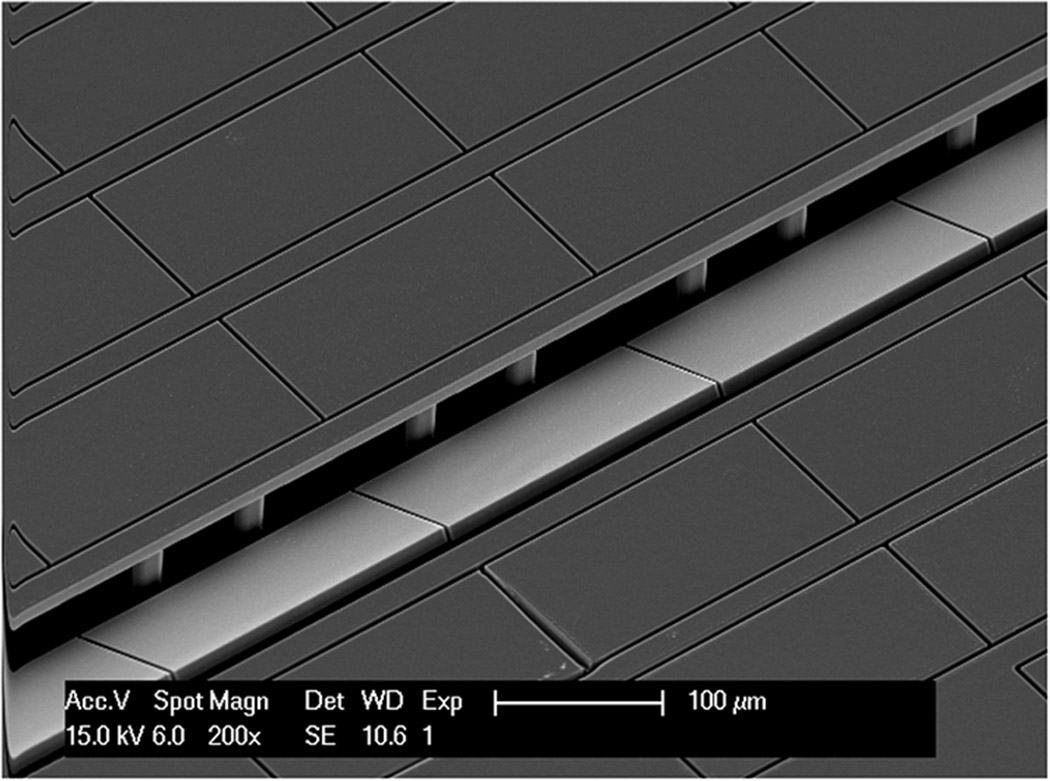 Figure 1. MIRA, a micromirror array composed of 2048 mirrors, each with an individual size of 100×200μm.2Such arrays may enable enhanced astronomical object selection in ground and space telescopes. 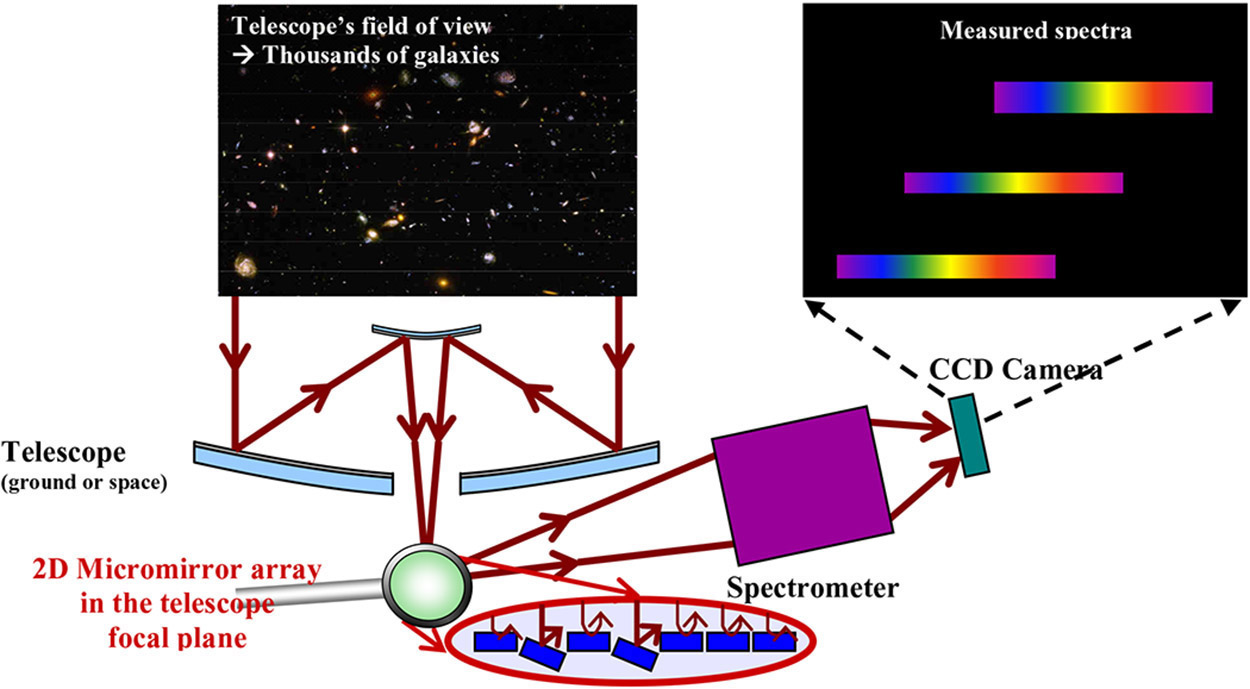 Based on this design, we are now developing a digital micromirror device (DMD)-based spectrograph called BATMAN, which would access the largest field of view (FOV) with the highest contrast. The selected component is a DMD chip with 2048×1080 mirrors, with a pitch of 13.68μm. Our optical design is an all-reflective spectrograph with focal number F/4 on the DMD component, which would allow the study of key parameters such as throughput, contrast, and the ability to remove unwanted sources in the FOV (background and spoiler sources), point spread function effects, and new observational modes. We plan to use BATMAN to conduct studies in the visible region, with possible extension to the IR. To test BATMAN on-sky, we plan to place the instrument on the Nasmyth focus of the Galileo National Telescope at the end of 2016.

Before developing BATMAN, we built a demonstrator named ROBIN, which was aimed at characterizing the actual performance of this new family of instruments, as well as investigating the operational procedures on astronomical objects. The design of the demonstrator is identical to that of BATMAN, but with mirrors and gratings of reduced size. ROBIN's mechanical design consists of a main optical bench supporting two arms: a spectrograph, and an imaging arm. The detectors are located on both sides of the bench. When integrated and aligned (see Figure 3), the optical beam enters from the top center (the DMD is located at the bottom center), and both arms are fed (the imaging arm is on the right-hand side, and the spectroscopic arm on the left). Both arms are fully identical, except that the convex mirror is replaced by a convex grating in the spectroscopic arm. Two charge-coupled device cameras located on both sides record the images and spectra. 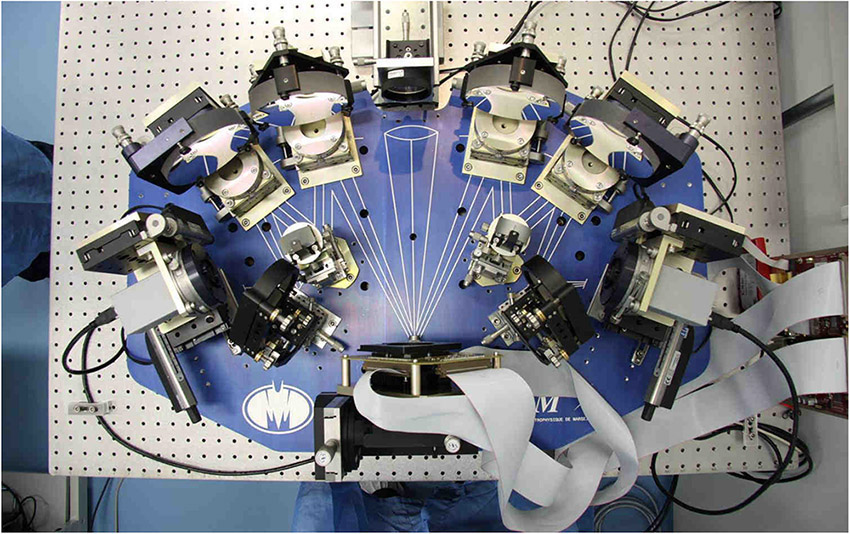 Figure 3. Photograph of ROBIN, demonstrator of the spectro-imager instrument BATMAN.

In the imaging arm, the optical quality is good enough for imaging each individual micromirror. In the spectroscopic arm, typical spot diameters are within 1.5 detector pixels, and spectra generated by one micromirror slit are displayed with this optical quality over the whole visible wavelength range. We have also tested the instrument abilities in terms of generating any slit mask configurations, as well as real-time reconfiguration.

For Earth observation, we propose an innovative reconfigurable instrument, with a programmable wide-field spectrograph where both the FOV and the spectrum could be tailored using a 2D micromirror array. We have designed, fabricated, and tested a mock-up. The micromirror array is the largest DMD, with 2048×1080 mirrors. We generated a synthetic linear FOV and recorded typical images at the output focal plane of the instrument. By setting the MMA, we successfully modified each pixel of the input image, and it is also possible to remove bright objects or—for each spatial pixel—to modify the spectral signature.3

In summary, our investigations show the ability of such MOEMS devices to work in future generations of MOS instruments and programmable spectrographs, in both ground and space telescopes. In parallel, to fill large focal planes (mosaicing of several chips), we are now developing large micromirror arrays integrated with their driving electronics.

Frédéric Zamkotsian received a PhD in physics from the University of Marseille, and in 1998 joined LAM, where he is involved in the conception and characterization of new MOEMS devices and development of MOEMS-based instruments for ground and space telescopes, including the spectro-imager BATMAN.