The ability to quantify and measure our world is the foundation of science and underlies much of modern society. Over the years, humans have therefore invented ever more precise schemes to measure physical quantities such as distance, mass, and time. A recent major step in this chronology was the invention of optical frequency combs.1, 2 These devices allow the oscillations of laser light to be counted. This is similar to counting the ticks of a clock, only that light ‘beats’ much faster. Optical frequency combs have boosted the accuracy of optical measurement technology, but the required systems are bulky, complicated, and expensive. 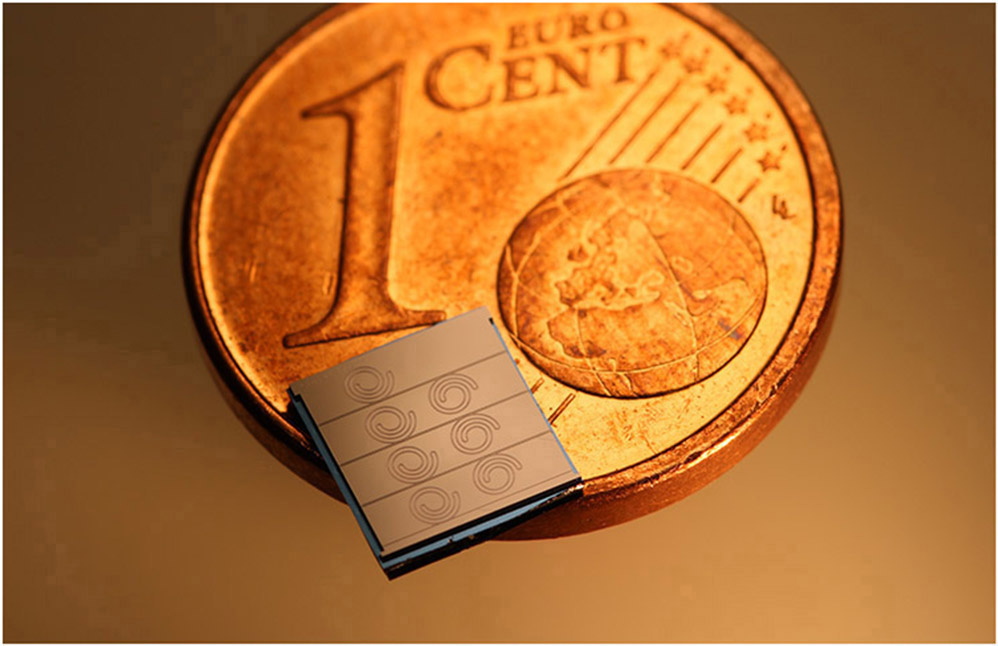 Figure 1. Photograph of a photonic chip with large silicon nitride spiral resonators. A chip such as this can be used to convert a continuous-wave laser to a broadband, coherent frequency comb.

In our recent work,7,8 we have demonstrated an on-chip microresonator frequency comb (a Kerr frequency comb) with which we are able to produce a broad optical bandwidth and high coherence at the same time. To meet these requirements, we exploit the complex interplay of light and matter inside the microresonator. Two of the main aspects of this complex interplay are the nonlinear Kerr effect and the group velocity dispersion (GVD) inside the resonator. From the disciplines of nonlinear physics and fiber optics we know that a balance between the nonlinear Kerr effect and the GVD can be reached and that a particular waveform—a soliton—can be produced. The key property of a soliton is that it does not change its shape as it propagates (and its shape is defined by the characteristics of the environment). Such solitons have previously been observed in bulk crystalline microresonators9 and are known as dissipative Kerr solitons. The intrinsic stability of a soliton allows us to overcome the problem of low coherence that has restricted the development of microresonator frequency combs in the past.

Our on-chip microresonator (see Figure 1) is a nanofabricated ring that is made of silicon nitride (see Figure 2). The ring is coupled to a straight bus waveguide so that light is coupled in and out. The light that is coupled into the straight waveguide is an amplified continuous-wave pump laser at 1560nm. The light that couples out of the waveguide on the other side of the chip constitutes a coherent frequency comb that spans two-thirds of an octave and has a smooth envelope (see Figure 3). When the pump light is resonant with the microresonator, it couples into the device. Inside the resonator the intensity of the light becomes very high, which leads to the onset of complicated cascaded nonlinear processes that generally produce broad, but incoherent, spectra.6 These processes have been observed experimentally before, but the novel aspect of our work is our ability to transition the system into a state where solitons circulate inside the ring. This state thus provides the desired coherent and broadband output. 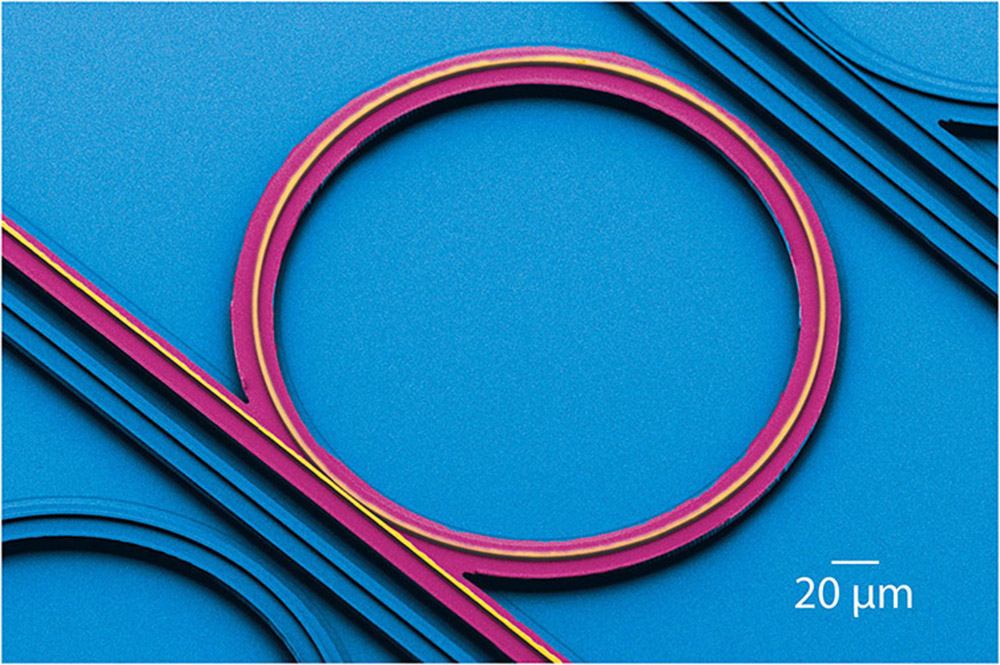 Figure 2. Colored electron microscopy image of the silicon nitride resonator (orange) on top of a silicon dioxide pedestal (purple), on the silicon chip (blue). This image was obtained before the silicon dioxide cladding was deposited on top of the structure. The ring resonator has a diameter of 238μm. The straight waveguide diagonally across the image (bottom left) is used to couple light in and out of the resonator.

Figure 3. Spectrum generated from a strong continuous-wave laser (clearly visible at 1560nm). The green dashed lines mark a bandwidth of two-thirds of an octave. The local maximum at 155THz is caused by soliton Cherenkov (dispersive wave) radiation.

Although the waveguide of the resonator forms a simple ring, by changing the cross section of the waveguides we were able to modify the GVD of the microresonator. On the other hand, alteration of the GVD directly relates to a change of the shape and dynamics of the soliton inside the microresonator. In particular, we observed a local maximum in the optical spectrum at about 155THz (see Figure 3). This phenomenon is known as dispersive wave or soliton Cherenkov radiation, and is caused by GVD of the third order or higher.10, 11 This type of radiation has previously been observed in fibers, fiber cavities, and in numerical simulations,12 but this is the first time it has has been demonstrated in a microresonator system. The position of this dispersive wave peak depends on the GVD of the resonator. It can therefore be tuned by changing the waveguide geometry. This allows us to use the maximum optical power for applications such as referencing or spectroscopy.

We have demonstrated a novel on-chip microresonator frequency comb that can be used to simultaneously achieve broad optical bandwidth and high coherence. By using solitons and soliton Cherenkov radiation inside our resonators, we were able to generate a coherent frequency comb that spans two-thirds of an octave (1330–2000nm) from a continuous-wave laser directly inside the chip-scale device. Our work thus represents a significant step toward producing a microresonator frequency comb as a stabilized frequency comb source on a chip scale. Our current work is focused in this direction, and we aim to achieve even wider bandwidths, further integration, and commercialization through our spin-off company Ligentec. We are also currently investigating the interesting physical effects that have been revealed from our simple system of a small ring pumped by a continuous-wave laser.

The authors thank all the funding agencies involved in this work, as well as staff at the CMi nanofabrication facility at École Polytechnique Fédérale de Lausanne where the samples were fabricated.