Many applications, such as dual-comb spectroscopy,1 are based on two modelocked lasers that generate two frequency combs with slightly different pulse repetition rates (see Figure 1). Dual-comb spectroscopy offers a very high measurement speed with unsurpassed precision, combined with a very broad optical spectrum. One drawback of the current schemes, however, is the requirement for two modelocked lasers, which makes the method complex and expensive. 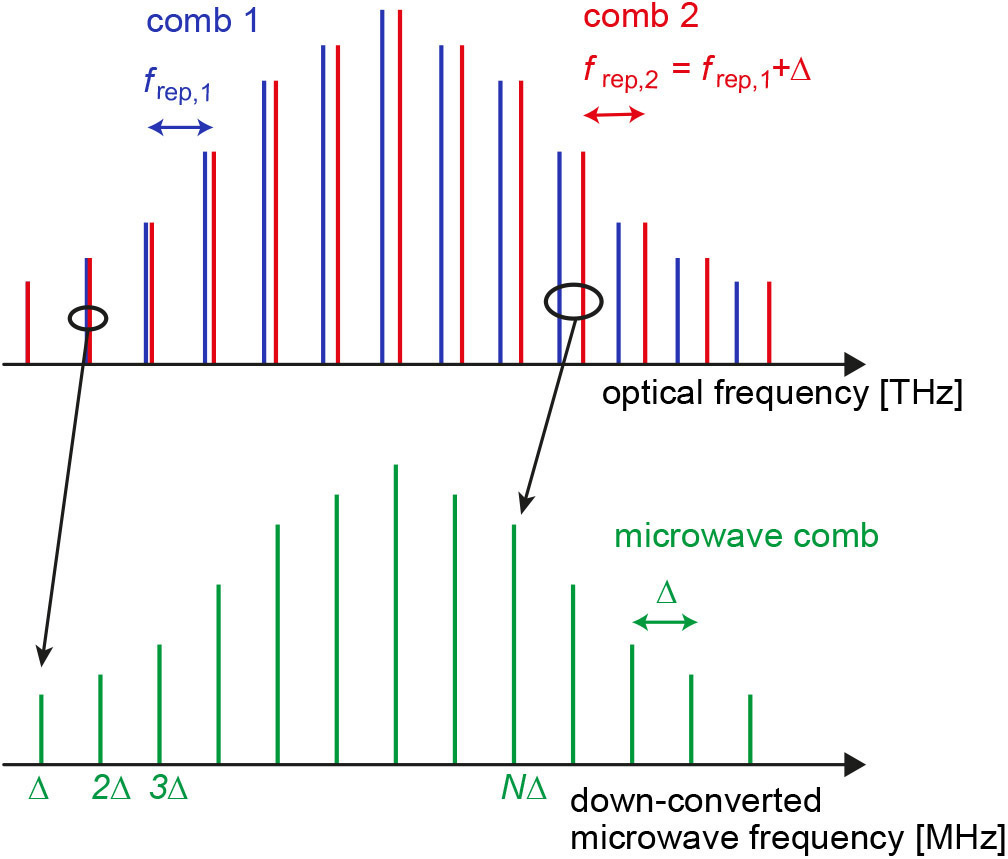 Modelocked lasers enable the emission of ultra-short pulses of light. This capability has had a dramatic impact in numerous areas of photonics, ranging from basic science to industrial manufacturing and biomedicine. Optical frequency combs, which can be generated with modelocked lasers, are unique tools for high-precision measurement in the fields of optical metrology and spectroscopy.

We have developed a simple, compact, and cost-efficient concept for the generation of two modelocked beams from a single gain medium in a shared cavity.2 The introduction of a birefringent crystal inside the laser cavity enables the emission of a second modelocked beam from the same laser cavity. In combination with novel ultrafast semiconductor lasers, this device can be integrated into a single straight cavity (see Figure 2). 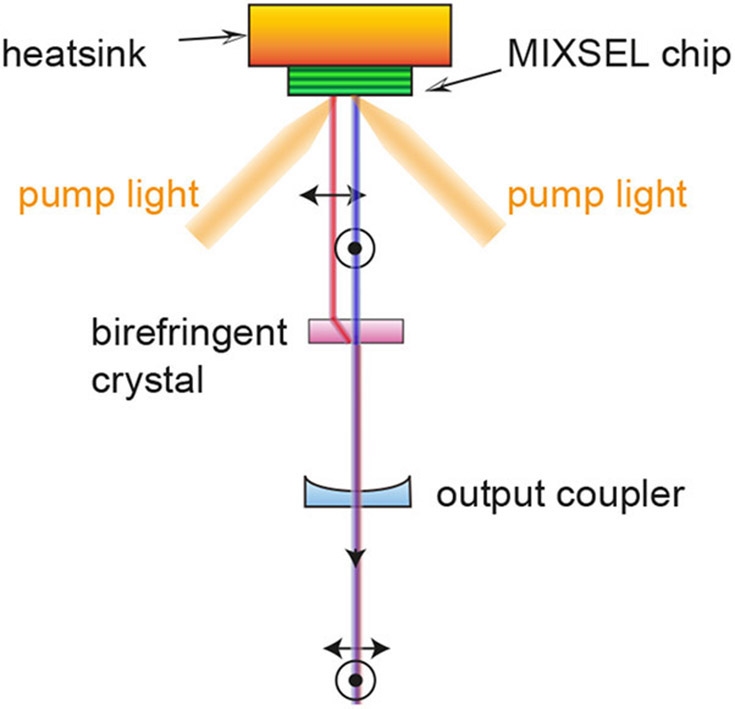 Figure 2. Dual-comb modelocked integrated external-cavity surface-emitting laser (MIXSEL). This device consists of an integrated high-reflective mirror, gain layers, and a saturable absorber layer. The simple laser cavity comprises the MIXSEL chip and an output coupler. By inserting a birefringent crystal into the straight linear cavity, the unpolarized cavity beam is split into two cross-polarized and spatially separated beams. When both spots on the MIXSEL chip are pumped with a commercial multimode pump diode, the dual-comb laser simultaneously emits two fundamentally modelocked beams. Outside the cavity, the beams can be separated with a polarizing beam splitter.

We have demonstrated this dual-comb method3 with a modelocked integrated external-cavity surface-emitting laser (MIXSEL).4 The MIXSEL, based on a semiconductor disk laser, combines the gain region of a vertical-external-cavity surface-emitting laser5 and the saturable absorber of a semiconductor saturable absorber mirror (SESAM)6 in a single structure.7 Because of this high level of integration, the MIXSEL enables fundamental modelocking in a simple linear cavity. This type of cavity allows for straightforward insertion of the birefringent crystal and simple beam alignment, which makes the technology especially attractive for dual-comb applications. In addition, the semiconductor growth is scalable at the wafer level and therefore potentially very cost efficient.

We inserted a calcium carbonate birefringent crystal into the cavity of the MIXSEL. This crystal splits the unpolarized cavity beam into two spatially separated, but collinear beams with slightly different optical path lengths (see Figure 2). We then pumped both spots on the MIXSEL with a commercial multimode pump diode by splitting the pump light with a beam splitter. This resulted in two fundamentally modelocked beams with slightly different pulse repetition rates. These rates are set by the two optical path lengths in the cavity. When the beams are coupled out (via an output coupler), they are collinear and fully overlap with one another.

For spectroscopic applications, the device must have two different pulse repetition rates. The comb-line spacing of the frequency comb is given by the repetition rate. When two frequency combs, with different comb-line spacing, are superimposed in the same polarization on a photodetector and the optical spectra of the two beams overlap, interference occurs between all of the optical frequencies. The information of the two optical-frequency combs is then down-converted into one microwave-frequency comb. This direct link between the terahertz and microwave frequencies is extremely useful, in contrast to terahertz frequencies, because the microwave comb can be measured directly with the use of a microwave spectrum analyzer.

We performed our measurements by superimposing the two beams of the dual-comb MIXSEL with the same polarization on a photodetector (see Figure 2). The resulting microwave spectrum shows two comb structures between zero and the pulse repetition frequency, as shown in Figure 3(a). By zooming in around comb1—see Figure 3(b)—we can clearly resolve the individual comb lines. All of the necessary information (e.g., for gas sensing) is contained in this comb, demonstrating the potential of the dual-comb MIXSEL for spectroscopic applications. The pulse repetition rates of the two beams were 1.89 and 1.895GHz, respectively, as shown in Figure 3(c).3 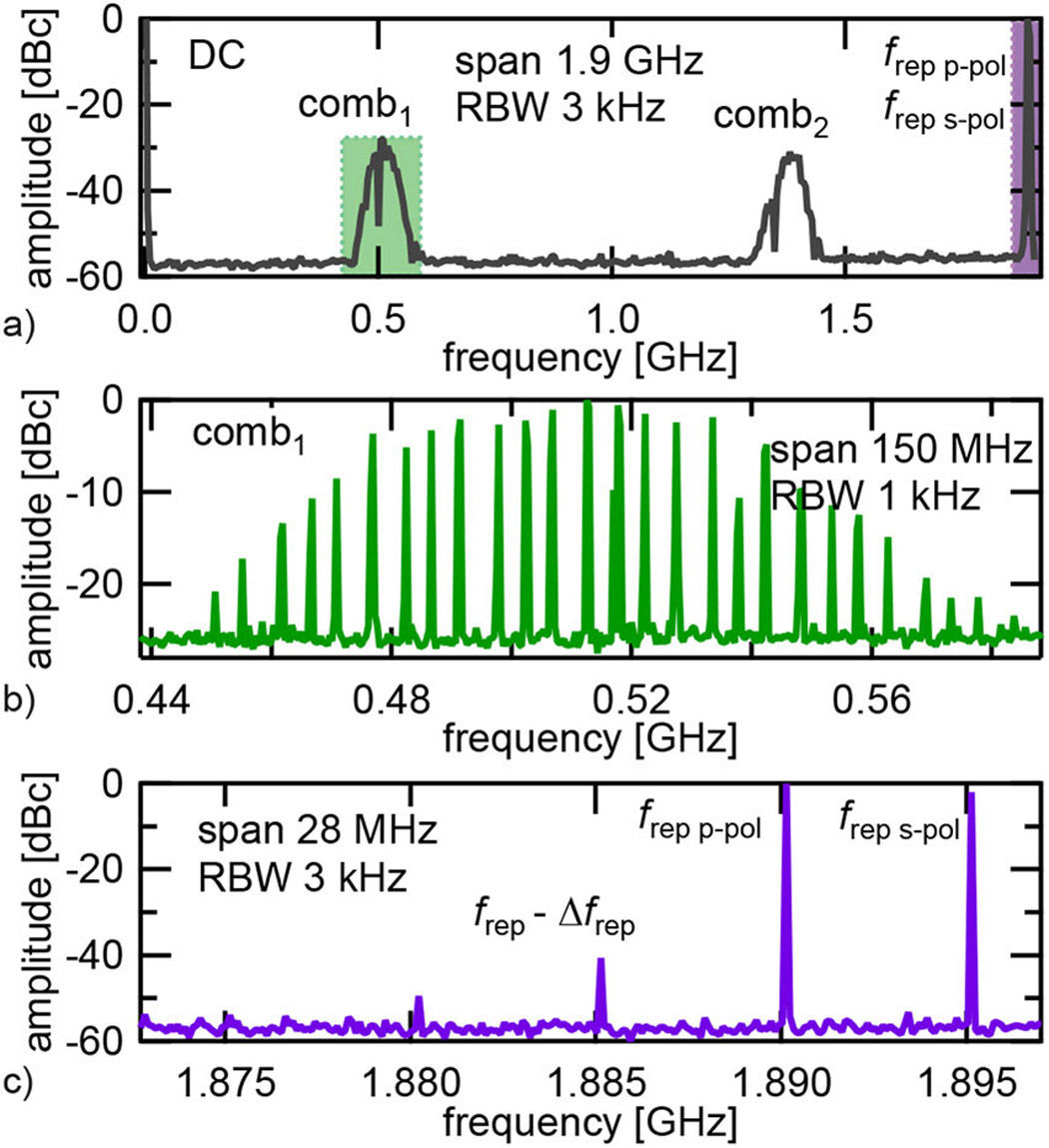 Figure 3. (a) The microwave spectrum between zero frequency (direct current, DC) and the pulse repetition rates. Two comb structures are visible. (b) A zoomed in view around comb1, with a reduced resolution bandwidth (RBW) of 1kHz, reveals the individual comb lines that could be analyzed for spectroscopic applications. (c) Another zoomed in view around the pulse repetition frequencies (frep p-pol and frep s-pol) shows that the two beams have a difference in pulse repetition rate (Δfrep) of 5MHz, which is caused by the difference in optical path length in the birefringent crystal. p-pol: Light polarized with its electric field along the plane of incidence (p-polarized). s-pol: Light polarized with its electric field normal to the plane of incidence (s-polarized).

Our dual-comb method provides a simple, compact and cost-effective laser source that simultaneously emits two modelocked beams. The measurement of the down-converted and directly electronically accessible microwave comb that results from the interference of the two beams is easily measured using a microwave spectrum analyzer. This technology shows great potential for application in the field of optical metrology and spectroscopy. We have recently extended our dual-comb concept to a diode-pumped SESAM-modelocked neodymium-doped yttrium aluminum garnet laser.8 We have also demonstrated the stabilization of the pulse repetition frequencies, together with a detailed noise analysis,8 and we plan to carry out the first spectroscopic experiments with our dual-comb laser in the near future.

The authors acknowledge the support of the technology and clean-room facility (FIRST) at ETH Zurich for advanced micro- and nanotechnology. This work was financed by the Swiss Confederation Nano-Tera.ch program, which was scientifically evaluated by the Swiss National Science Foundation.