Super-resolution microscopy, used to image structures significantly smaller than the wavelength of light, encompasses several scanning methods. Examples include stimulated emission depleted (STED) microscopy, reversible saturable optical fluorescence transition microscopy, and stochastic wide-field methods, such as photoactivated localization, stochastic optical reconstruction, and ground state depletion microscopy. The demanding nature of the image formation process means that aberrations induced by the sample can significantly compromise resolution and signal to a degree that goes beyond that seen in conventional, diffraction-limited methodologies. To correct for these aberrations, and to enable effective imaging in otherwise unsuitable samples,1 we have introduced adaptive optics (AO) technologies into super-resolution microscopes. Specifically, we combined a deformable mirror with a spatial light modulator (SLM) in a STED microscope, and were able to image at depths where a conventional STED microscope would fail to return any images.

When imaging structures in tissue, the inhomogeneous nature of the refractive index causes distortions of the wavefronts as they propagate through the tissue. The resulting aberrations affect the quality of the image obtained by the microscope by distorting both the excitation focus and the emitted light from the sample. For STED imaging, which requires an additional depletion beam that generates a structured focal volume to enable resolution enhancement, the effects of aberrations on the imaging process are even stronger.

To correct for the aberrations, it is necessary to introduce an active (or adaptive) optical element to the microscope. By distorting the wavefront in an appropriate way, it is possible to cancel the aberrations induced by the sample. The most common AO devices are liquid crystal SLMs and deformable mirrors (DMs). Both have their benefits and drawbacks, relating to their polarization and wavelength sensitivity, the complexity of wavefront correction they can perform, and the total amplitude of correction they can generate.

We previously showed2 that having an SLM in the depletion beam path of a STED microscope is of considerable benefit. As well as replacing the phase plate required by conventional STED microscopes to generate the structured focal volume, it allows correction of aberrations in the depletion beam, ensuring the well-defined focal structure that enables the super-resolution process.3 However, because of the wide wavelength range of the light involved and the non-polarized emission, the SLM does not correct the fluorescence excitation and emission paths, and it would be an inefficient device for correction of all three beam paths.

We showed that, by incorporating a DM in the common beam path, it is possible to significantly improve the range of samples amenable to STED imaging. We retain the SLM in the depletion path, both for generating the phase mask and to allow fine tuning of the depletion focus. Figure 1 shows the effect of the AO correction on the confocal and STED imaging process when imaging 15μm beneath the surface of a Drosophila melanogaster brain. Without the AO correction, the STED image is effectively a dim confocal image with no additional spatial resolution: see Figure 1 (top). Furthermore, the depletion beam introduces sample damage for no scientific gain in this case. However, after correcting for the aberrations in the sample, we recover a good STED image: see Figure 1 (middle, bottom). 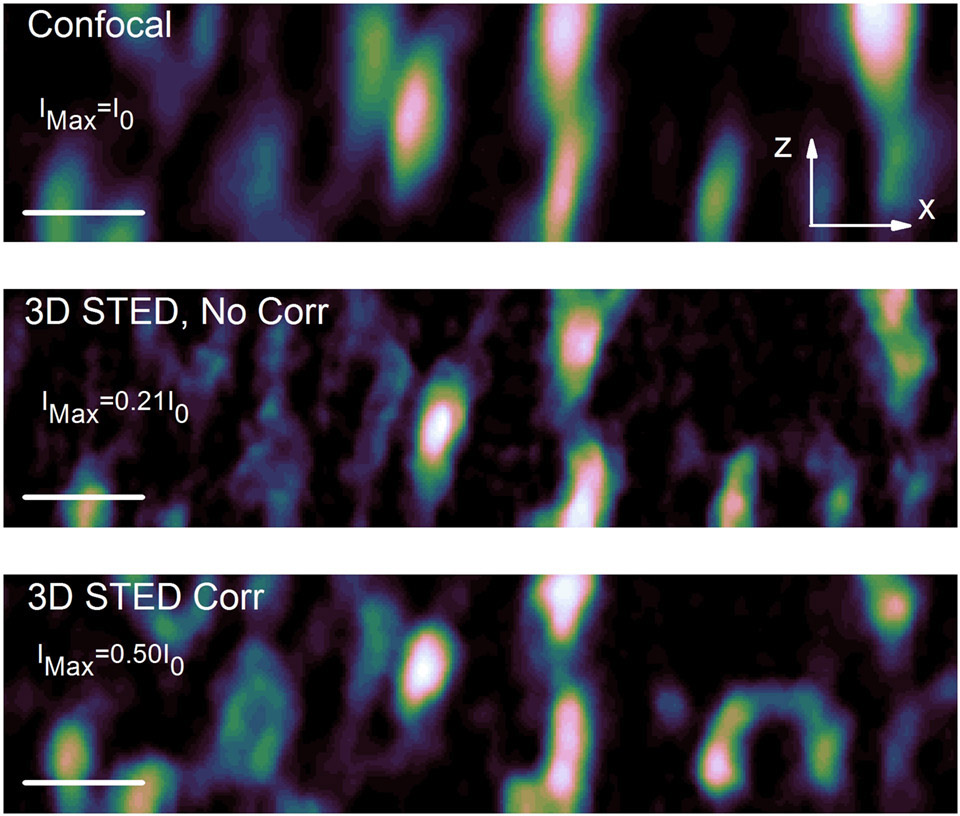 Figure 1. Comparison of the effect of adaptive optics (AO) correction on confocal and 3D stimulated emission depleted (STED) imaging for a dual-AO system. Images were acquired at a mean depth of 15μm in a Drosophila melanogaster brain. Image color scale set to IMax, as shown. For the confocal case (top) we present an image with AO correction. For the STED we show images with no correction (middle) and full correction (bottom) using both deformable mirrors and additional correction from the spatial light modulator. Scale bars are 1μm.

By introducing AO to our STED microscope we enable super-resolution imaging in conditions and samples that would otherwise entirely prevent the formation of an image. Having proved the concept we will now seek to extend its application to structures in more highly aberrating media.

Brian Patton is a Royal Society University Research Fellow in the Centre for Neural Circuits and Behaviour. His research aims to develop diamond as a fluorophore for use in super-resolution microscopy and functional neural imaging.

Debora Andrade received a PhD from the University of Göttingen, and is currently a postdoctoral researcher with Martin Booth's group, developing AO strategies for super-resolution microscopy.

Daniel Burke was awarded a PhD from the National University of Ireland, Galway, and is currently a research scientist at OBS Medical. His research interests focus on the application of machine learning techniques for biomedicine.

Martin Booth is professor of engineering science. His group has developed numerous methods for AO in microscopy and photonic engineering. A particular focus of this work is on the development of novel approaches to aberration correction in high- and super-resolution microscopy.

Joerg Bewersdorf trained under Stefan Hell at the Max Planck Institute, Göttingen, Germany. He is currently an associate professor in the Departments of Cell Biology and Biomedical Engineering. His research area is the development and application of new fluorescence microscopy techniques for biomedical research, in particular super-resolution microscopy.