Metal-oxide nanostructures and composites have potential as functional materials for the development of renewable-energy resources and technologies.
29 February 2016
Magnus Willander, Zafar Hussain and Omer Nur

The future depletion of fossil-fuel reserves and the increase in greenhouse-gas emissions necessitates the urgent development of environmentally friendly renewable-energy technologies. Nanostructures, which have attracted great interest in recent years because of their unusual properties, show promise in this field. Their reduced size results in a dramatic increase in the surface-area-to-volume ratio compared to standard materials, which renders surface-related effects dominant. In addition, nanomaterials offer unique properties when used as electrodes and electrolytes in a range of energy devices. For these reasons, they are becoming increasingly important in areas such as electrochemical sensing, energy harvesting, and storage. In the past few years, we have investigated the potential of nanostructures for providing innovative energy solutions and new applications. Our research has focused on using electromechanical energy generators and electrochemical energy sensors. We have also made use of the exceptional catalytic properties of nanostructures for energy production.

Among the nanomaterials we investigated, metal-oxide nanostructures possess significant advantages: we can use them to produce highly efficient nanodevices due to their physical and chemical properties. Metal oxides are made of positive metallic ions and negative oxygen ions, with electrostatic interactions between them resulting in firm and solid ionic bonds. Since the inner electron shells of metal oxides are completely filled, most of them have good thermal and chemical stability. However, their outer shells may not be entirely occupied, giving metal oxides a variety of unique properties that make them potentially of great use in electronic devices.

Our first example concerns the development of a self-powered piezoelectric sensing device using zinc oxide (ZnO).1 Piezoelectric materials transfer ambient mechanical energy and vibrations—abundant all around us—into useful electrical energy. To develop a piezoelectric anisotropic sensor, we grew ZnO nanowires using the low-temperature chemical-growth method on both sides of a flexible plastic substrate. When this device is bent, the different sides will have different voltage polarity. Therefore, depending on the polarity of the voltage, we can determine the bending direction. Figure 1(a) and (b) shows the working principle of our device and a digital photograph of the self-powered sensor fabricated on flexible plastic. Figure 1(c) shows the measured harvested voltage from both sides of the sensor. 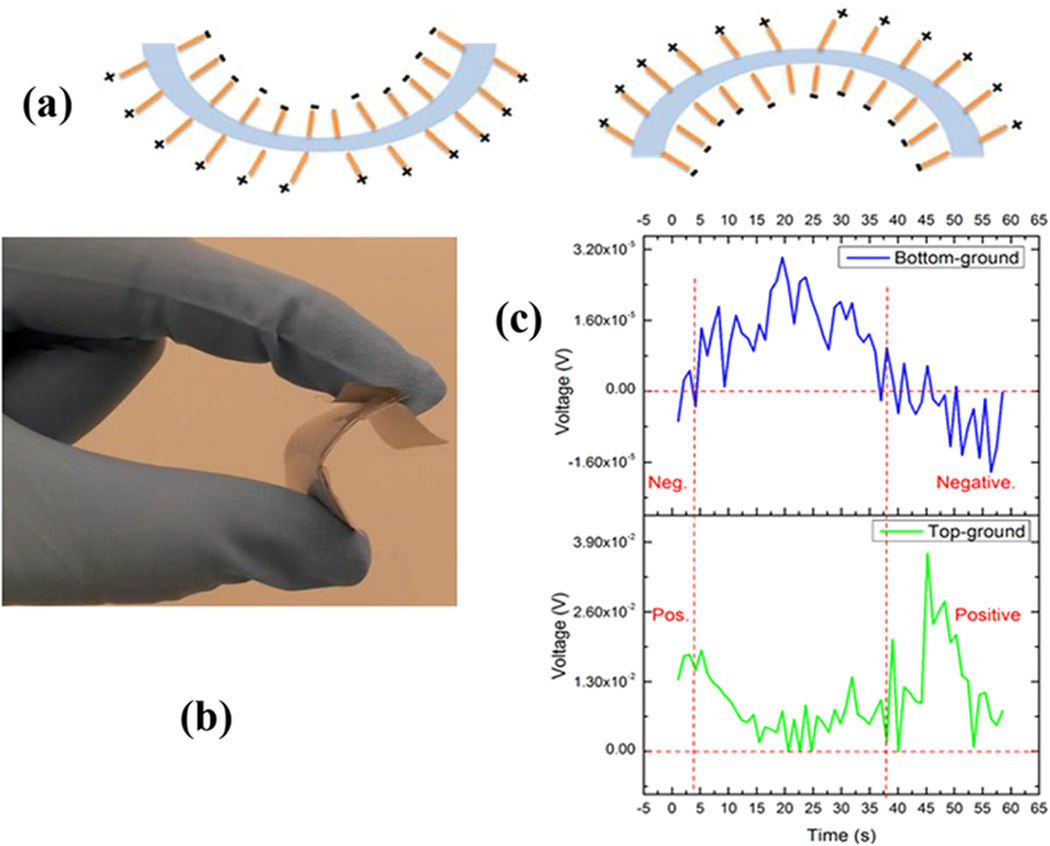 Figure 1. (a) Operating principle of our piezoelectric anisotropic self-powered direction sensor. (b) Digital photograph of the flexible sensor on a plastic substrate. (c) The simultaneous opposing polarity voltages are harvested from the two different sides of the device.

In addition, using the same nanomaterial, we demonstrated energy nanogenerators with handwriting-enabled harvested electrical energy.2 In this case, we grew ZnO nanowires on top of a paper substrate. We then cut the paper in two, attached the two pieces face-to-face, and applied contacts to the end of each piece of paper. The pressure resulting from writing on this structure by hand bends the ZnO nanowires, which then transform the mechanical energy applied into electrical energy due to the piezoelectric properties of ZnO.

Further, we have done work on self-powered electrochemical sensors. In this case, the surface of a potentiometric electrode is coated with a metal-oxide nanomaterial. This sensor can selectively interact with ions, molecules, or biological analytes to convert chemical energy into electrical energy.3

We have also done work on generating an alternative clean-energy source: hydrogen. In one case, we used the highly catalytic properties of some metal-oxide nanostructures to fabricate efficient and low-cost photoelectrodes for hydrogen production from water splitting. Though not a metal-oxide nanostructure, recent results on the use of an InN/InGaN (indium nitride/indium gallium nitride) quantum-dot photoelectrode show the possibility of efficient hydrogen generation via water splitting using visible light at zero bias. This shows promise for the development of low-cost hydrogen production electrodes.4

In summary, our recent research shows the potential of nanomaterials for the development of new renewable energy resources and technologies. We anticipate that the devices we developed will help ensure future sustainable, clean-energy generation. In the near future, we plan to broaden the scope of our research on energy applications using nanomaterials to include the use of visible sunlight for performing photocatalytic processes and also to develop new cells for energy saving.

Magnus Willander is a professor in the Department of Science and Technology. He works in the broad areas of materials science, physics, and chemistry, developing new materials and devices. He is a Fellow of the American Physical Society, the Institute of Physics, and the Nanosmat Society.

Omer Nur is an associate professor and holds a senior lecturer position at the Department of Science and Technology. He is involved in research concerning nanomaterials and nanodevices.

Zafar Hussain did his BSc and MSc at Shah Abdul Latif University in Pakistan and received a doctorate degree from Linkoping University in Sweden in March 2014. He then returned to Pakistan where he is now involved in research and teaching.