Cell membranes play an active role in many biological processes and are complex, highly heterogeneous media. They contain a variety of molecular species and structural elements that may interact with each other, leading to complex lateral diffusion behavior. Insights into this behavior could help in understanding the composition, organization, and function of membranes in cell biology.

Fluorescence-correlation spectroscopy (FCS) is a powerful method for determining the average diffusion coefficients of the molecules in these membranes. Measurements that are made using this approach are based on the movement of thousands of molecular transitions through an observation spot.1 However, the diffraction-limited resolution of confocal microscopy makes it difficult to probe heterogeneity on the sub-100nm scale. Stimulated-emission-depletion (STED) microscopy has become a well-established method for achieving spatial super resolution (below 50nm). Using STED enables the size of the observation volume to be tuned. As a result, the common issue that arises from fluorescence-correlation spectroscopy, namely, the diffraction-limited lateral resolution, is avoided. This limited resolution makes it difficult to probe diffusion heterogeneity on the sub-100nm scale and is only inferable by extrapolations. By gradually shrinking the observation spot size, the type of hindered diffusion (e.g., unperturbed Brownian motion, obstacle-induced restricted diffusion, or transient trapping of molecules in permeable domains), and therefore the local environmental organization of the diffusors, can be determined.

We have developed a pulsed-illumination scheme based on pulsed-interleaved excitation (PIE).2 This technique allows FCS data to be collected from a sample spot under both confocal and super-resolution conditions nearly simultaneously.

Our excitation scheme enables photon-arrival-time information to be fully exploited by means of time-correlated single-photon counting. This technique enables species that are labeled with different fluorophores to be accurately separated by taking into account subtle differences in their fluorescence characteristics.3 The diffusion coefficients can then be directly compared, even for spot sizes far beyond the confocal diffraction limit. Such a comparison represents a straightforward method by which to check whether STED illumination has any influence on the dynamics that are under investigation.

We collected FCS data on a time-resolved fluorescence microscope equipped with an STED add-on (see Figure 1). The illumination system features two pulsed diode lasers. Of these, one excites the fluorescent labels and the other (the STED laser) deactivates their emission.4 The two laser beams, combined using a dichroic mirror, pass through a segmented phase plate. At this plate, the polarization profile of the STED laser is altered to form a ‘donut’ in the focal plane. Emission from labels that are present in this donut are deactivated via the induction of stimulated emission, resulting in a smaller effective observation area in the center. 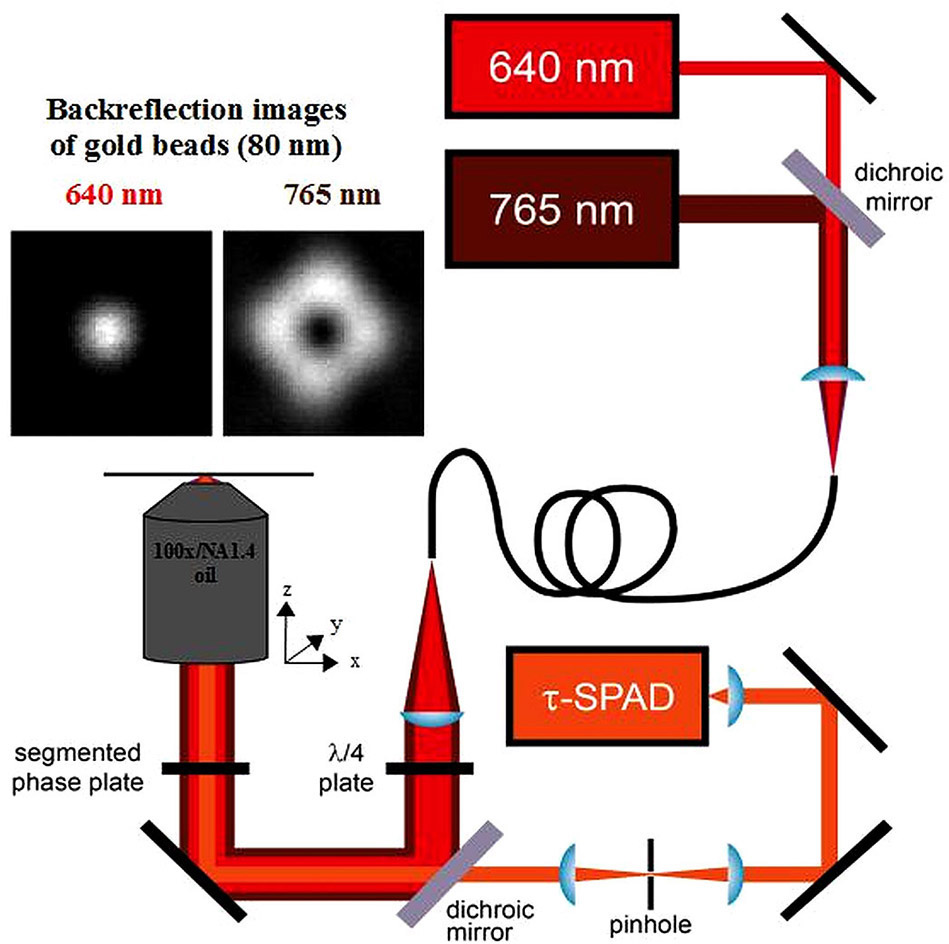 Figure 1. Schematic overview of the time-resolved confocal microscope setup. The excitation and stimulated-emission-depletion (STED) lasers (640 and 765nm, respectively) are spatially overlaid and coupled into a single-mode fiber. Both beams pass through a quarter-wave plate, the main dichroic mirror, and the segmented phase plate. The beams are then focused on the sample with a high-numerical-aperture objective. Emitted light is collected and imaged through a pinhole onto a single-photon avalanche diode (SPAD). The inset shows the back-reflection images of an 80nm gold bead for the excitation and STED lasers.

To determine the effects of the STED illumination, we studied diffusion-time variations as a function of the observation-area diameter for fluorophore-labeled sphingomyelin in a supported lipid bilayer (SLB) consisting of a synthetic phospholipid: see Figure 2(a). We tuned the size of the observation area by increasing the STED laser power. Higher depletion powers led to a broader donut-shaped profile, thus causing the central observation area to shrink: see Figure 2(b). Deactivating the STED laser results in a spot diameter of 250nm, corresponding to the confocal diffraction-limited resolution. By increasing the STED laser power, the effective observation spot diameter can be reduced from 250 to 40nm. Diffusion times observed in these spots follow a linear trend, indicating that the labeled lipid diffuses freely in the artificial SLB. Because there are no additional species that could interfere with the process, this diffusion behavior conforms to expectations. 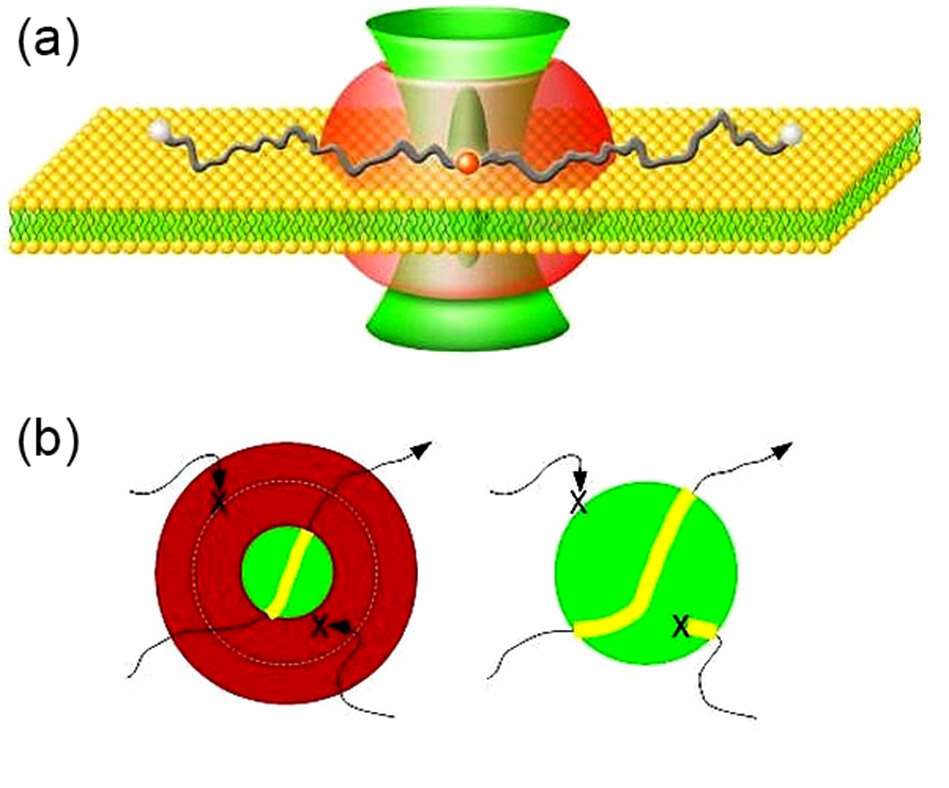 Figure 2. (a) Fluorophore-labeled sphingomyelin (white/red sphere) diffusing in a supported lipid bilayer (gray pathway). The scheme shows the confocal beam waist (light green) and the effective STED observation volume (dark green). The red donut is formed by the STED laser. (b) Cross sections of the focal plane with and without the STED donut (red), which alters the effective observation volume (green). Fluorescent labels undergoing photobleaching are indicated by black crosses. Diffusion paths are shown as wavy black arrows, and yellow lines indicate the fluorescing path sections that contribute to fluorescence-correlation spectroscopy.

Our PIE-STED-FCS method enables FCS data to be collected from a sample area under both STED and confocal conditions nearly simultaneously. A direct comparison of the results proves that STED illumination introduces no relevant artifacts during the FCS-based diffusion-coefficient test. The experiments that we have carried out represent a good stepping stone toward the study of cholesterol-mediated lipid interactions, which may enable the formation of nanodomains (e.g., lipid rafts) that could trap the diffusing species. Our method enables domain size and lipid interaction to be studied beyond the diffraction limit. Moreover, following the gradual diffusion-coefficient changes as a function of the observation area could provide additional insights into membrane dynamics. Having established this method, we will now expand the STED-FCS studies to more than one species, and the imaging to more than two labels.