Diffraction efficiency and peak signal-to-noise for an amplitude hologram, phase hologram, and kinoform are used to assess the quality of a Fourier transform hologram in a new methodology.
03 March 2016
Hiroshi Yoshikawa, Takeshi Yamaguchi and Hiroki Uetake

In computer-generated holography, images are produced from digitally generated holographic interference patterns. The hologram can then be printed onto a mask or film for illumination by a coherent light source. Computer-generated holograms (CGHs) have a wide range of applications, e.g., in 3D displays, security labels for anti-counterfeiting, and optical elements. The image quality of CGHs, however, is usually evaluated subjectively and thus a more accurate assessment technique is required.

In a standard CGH image quality evaluation approach, the reconstructed image is compared with other holograms. Alternatively, the image quality can be determined with the use of the double-stimulus impairment scale method, to compare the hologram to the original image.1 In this approach, an observer estimates the degree of image degradation subjectively. Quantitative evaluation of the image is therefore very difficult.

In this work,2 we introduce an objective image quality evaluation methodology for CGHs. In this approach, we evaluate both the diffraction efficiency (DE) and the peak signal-to-noise ratio (PSNR) of the hologram. The DE is defined as the ratio of the reconstructed light intensity to the input light intensity, and the PSNR is the ratio of the noise power to the maximum power of the signal. We have based our work on previous research, in which the quality of the Fourier hologram is evaluated. This Fourier hologram can be calculated from the Fourier transform of the original image.3

An original 2D image—located on the input image plane—which we use to highlight our technique is shown in Figure 1. We numerically reconstructed this image from the rigorously calculated amplitude of the CGH (see Figure 2). The DE and peak signal-to-noise ratio of this CGH were 0.75% and 11.8dB, respectively. Generally, an image with a PSNR of more than 35dB is considered to be high quality. The reconstructed image shown in Figure 2(a), therefore, is substantially deteriorated from the original. The main source of noise in this reconstruction is the object self-interference, which can be removed numerically in computer-generated holography.4 We have thus also reconstructed the original image from a low-noise CGH (DE of 0.77% and PSNR of 38.9dB), as shown in Figure 2(b).5 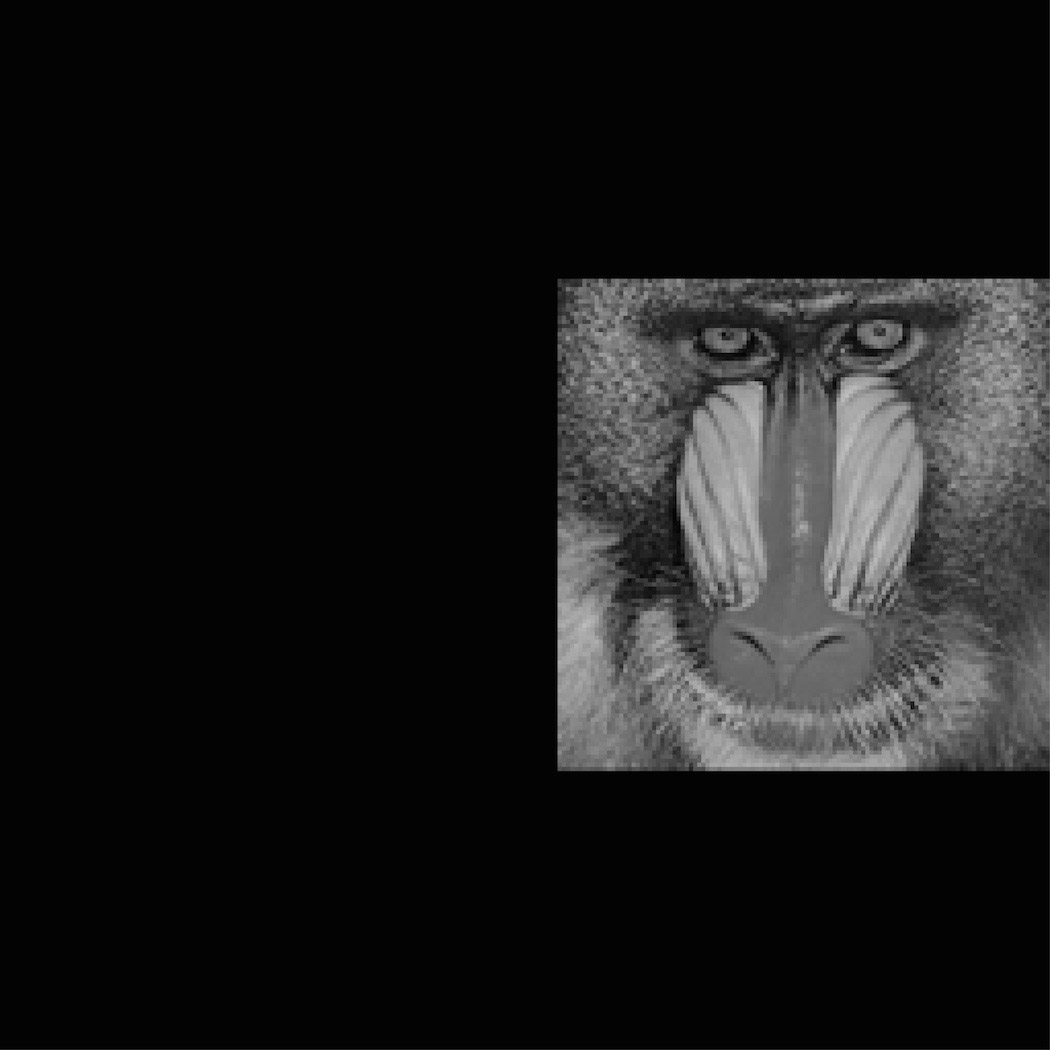 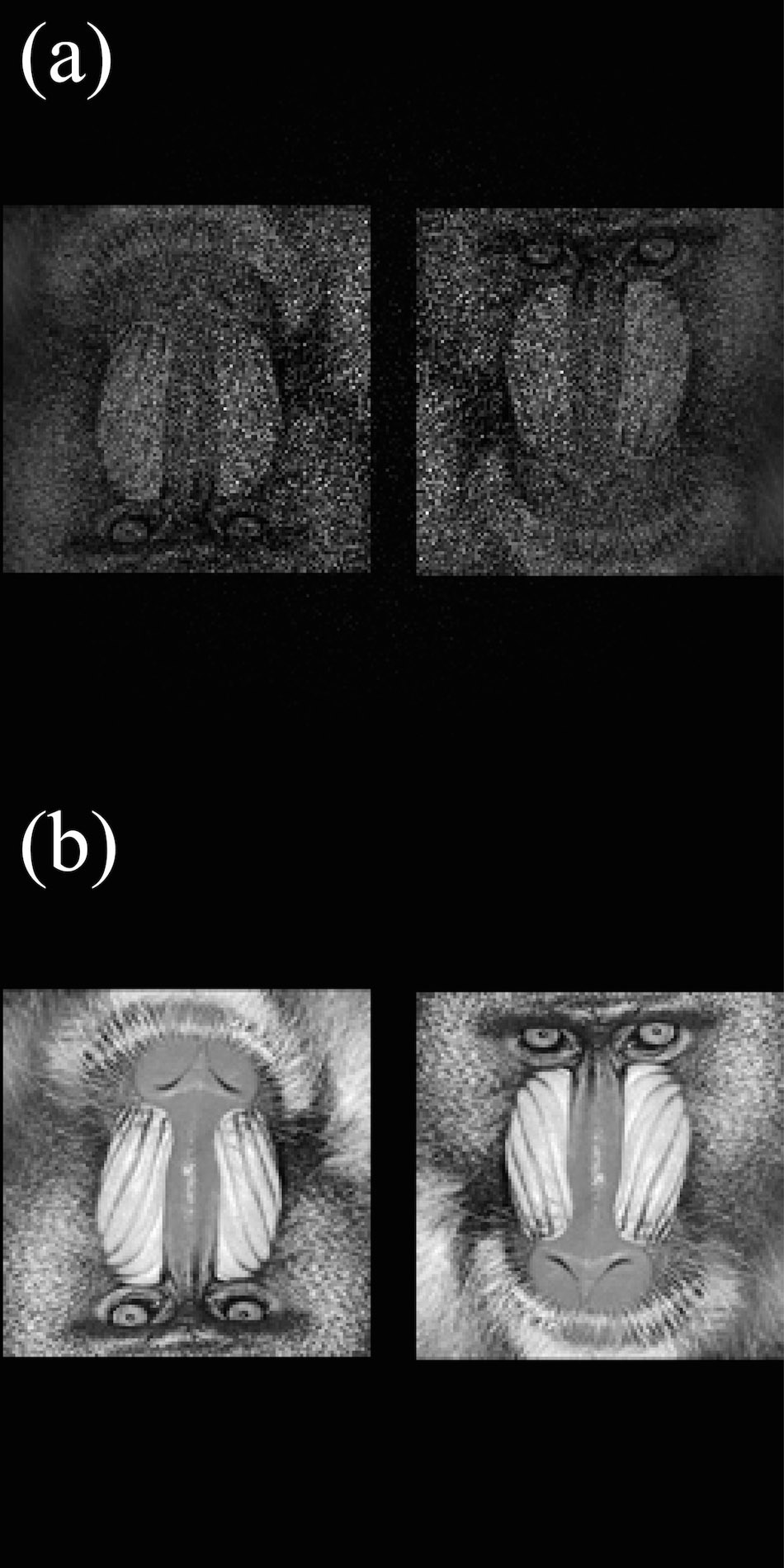 Figure 2. Reconstructed images from (a) a rigorously calculated computer-generated hologram (CGH) and (b) a low-noise CGH.

For a phase-type CGH, the low-noise reconstruction approach works well and can provide a DE as high as 8.8%.6 The best PSNR that can be achieved (25.0dB), however, is worse than that produced from the amplitude-CGH method. During the calculation of a CGH, a random phase is applied—before the Fourier transform—to the original image plane. From our numerical experiments, we found that the image quality depends on this random phase. We have therefore investigated the use of an optimized diffuser for a kinoform (a converging lens)7 instead of the random phase. To obtain this optimized diffuser, we applied the Gerchberg–Saxton algorithm.8 Theoretically, a kinoform should produce a DE of 100%. Our reconstructed image from the initial kinoform is shown in Figure 3(a) and has a random phase with a PSNR of 8.4dB. In addition, the reconstructed kinoform image after 10 iterations has a PSNR of 21.6dB, as shown in Figure 3(b). We find that the PSNR of the kinoform-reconstructed image exceeds 35dB after 106 iterations. 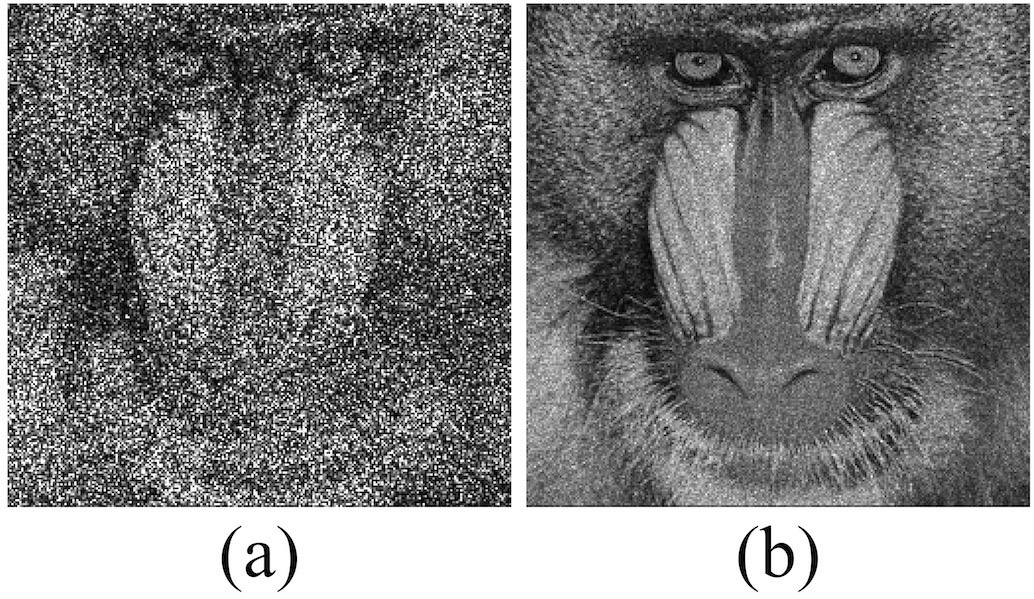 Figure 3. Reconstructed images from a kinoform. (a) The initial image with random phase. (b) Reconstruction after 10 iterations.

For optical holograms, it is known that high-contrast development makes the reconstructed image brighter. In computer-generated holography, this image brightening can be achieved through non-linear conversion. For the case of our amplitude low-noise CGH, the DE can be increased to 6%, which is eight times brighter than the original CGH. For this CGH, however, the PSNR also falls to 15dB (from the original 38.9dB). In contrast, for the phase low-noise CGH, we achieve a seven-times increase in DE and a decrease in the PSNR from 25 to 12dB.

In summary, we have investigated a new method for objective image quality evaluation, with the use of computer-generated holograms and kinoforms. By controlling the quality of reconstructed images, the signal-to-noise ratio is sacrificed to obtain a higher diffraction efficiency. We therefore require a more effective control method. Our current research involves the use of a Fourier hologram and a 2D image. It is thus our aim to develop our methodology for the evaluation of 3D images. The evaluation of 3D holographic image quality is still in its very early stages, and we would therefore welcome advice and comments from the wider community.

Hiroshi Yoshikawa received his BS, MS, and PhD in electrical engineering from Nihon University in 1981, 1983, and 1985, respectively. He joined the faculty at Nihon University in 1985, where he is currently a professor of electronics and computer science. Between 1988 and 1990 he was a research affiliate of the Massachusetts Institute of Technology's Media Laboratory. His current research interests include electro-holography, computer-generated holograms, display holography, and computer graphics.