A novel monolithic grating can be designed to reflect light of almost any wavelength and can be used in integrated optoelectronics systems.
19 February 2016
Marcin Gębski, Maciej Dems, Michał Wasiak, James A. Lott and Tomasz Czyszanowski

Vertical-cavity surface-emitting lasers (VCSELs) are widely used in short-distance (rack-to-rack) optical links because of their low manufacturing cost per unit, small size, high modulation speed, and high energy efficiency. For these same reasons, they are the best candidates for other emerging technologies, such as very short distance (board-to-board) and ultra-short distance (on-board) optical links. Current VCSELs, however, are tens of micrometers thick and are relatively complicated devices. They consist of more than a hundred semiconductor layers that form the active region, a current and/or optical confinement scheme, and two high-reflectivity distributed Bragg reflector mirrors (DBRs). To make these devices more suitable for future applications, it is therefore necessary to achieve further downsizing and simplification.

The minimum possible thickness for an optical cavity is half of the emission wavelength, and this has already been experimentally demonstrated.1 The largest geometrical part of VCSELs, therefore, is now the DBR mirrors. It is not only their thickness, however, that is the problem. DBRs contain tens of pairs (i.e., of two different semiconductor materials) of layers that have quarter-emission-wavelength thicknesses. The reflectivity of a DBR increases with increasing number of these pairs, and with increasing difference in the refractive indices of the two materials. At the same time, the semiconductor materials need to have matching lattice constants and thermal expansion coefficients, as well as the largest possible thermal and electrical conductivities. All these requirements for DBRs can only be met in VCSELs that are based on gallium arsenide (GaAs), which emit in the 0.62–1.2μm wavelength range.

In our work, we have therefore proposed that thinner and simpler VCSELs can be created by replacing DBRs with a different type of mirror. These alternative mirrors are based on high refractive index contrast gratings (HCGs). These are planar, sub-wavelength gratings that can be designed to reflect almost 100% of the incident light in a broad spectrum.3 The main drawback of an HCG is that the high-refractive-index material must be surrounded by a low-refractive-index layer (e.g., air, or oxides). This requirement makes it difficult to manufacture such structures and to design effective current injection in HCG lasers. In our approach we use a novel HCG mirror, in which we require a low-refractive-index material on only one side (outside of the laser). We find that such monolithic HCG (MHCG) mirrors can be made through shallow etching of almost any semiconductor material used in optoelectronics applications.

In the first part of our study, we used a fully vectorial, three-dimensional optical model—based on the plane-wave admittance method—to analyze the reflectivity of infinitely periodic MHCG mirrors.4 We investigated MHCGs made from gallium nitride, GaAs, silicon, and indium phosphide to find grating design parameters that provide nearly 100% reflectivity at wavelengths of 420, 980, 1300, and 1550nm, respectively. We found that several sets of such design parameters exist for these materials and wavelengths, and also for any material that has a refractive index of more than 1.75. This means that the mirrors can operate at all wavelengths from the deep-UV to the far-IR.5

In the second stage of our work we analyzed a GaAs-based VCSEL structure that included MHCG mirrors designed for emission at a wavelength of 980nm. For this analysis, we used a multi-physics model—which takes into account thermal, electrical, and gain phenomena—combined with the same optical model. The structure we investigated consisted of an active region with five quantum wells, p- and n-type GaAs spacers (the MHCG mirrors were etched on the surfaces of these spacers), and an 8μm-diameter selectively oxided current aperture in the anti-node of the standing wave (see Figures 1 and 2). 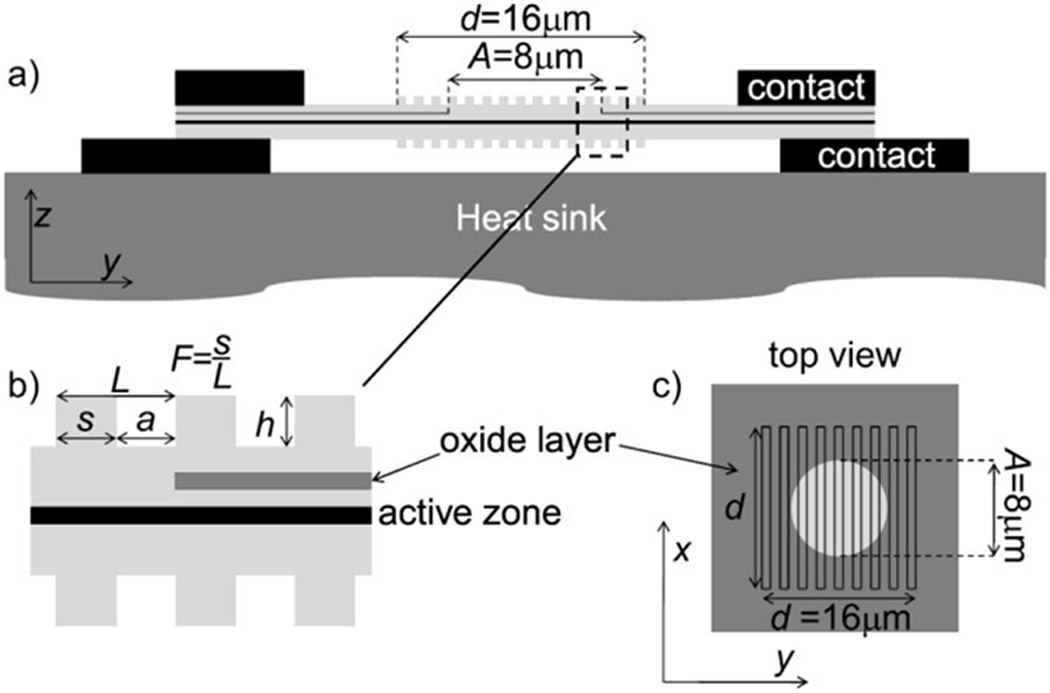 Figure 1. Illustrating the design of the proposed monolithic high refractive index contrast grating (MHCG) vertical-cavity surface-emitting laser (VCSEL). (a) Side view of the structure's cross section, where it is mounted on a copper heat sink in an intracavity mounting scheme. A is the oxide aperture and d is the grating width. (b) Close-up of the cavity where MHCG parameters are shown, i.e., the period, L, fill factor, F, thickness or etching depth, h, stripe width, s, and air gap width, a. (c) Top view of the proposed structure.2

Our optical simulations show that diffraction loss in the structure increases with increasing cavity length. This corresponds to an increase of the threshold gain, from 200 to 700cm−1 for one- and three-wavelength cavities, respectively. The longitudinal confinement factor is 20% smaller than a typical DBR-based VCSEL because most of the optical mode is located in the grating. In addition, our thermo-electrical simulations reveal that both electrical resistance and thermal impedance decrease with increasing cavity length. As illustrated in Figure 3, increasing the cavity length to 10.5 wavelengths causes a drop in the thermal impedance and electrical resistance to 2000W/K and 80Ω, respectively. These values are comparable with standard DBR-based GaAs VCSELs.2 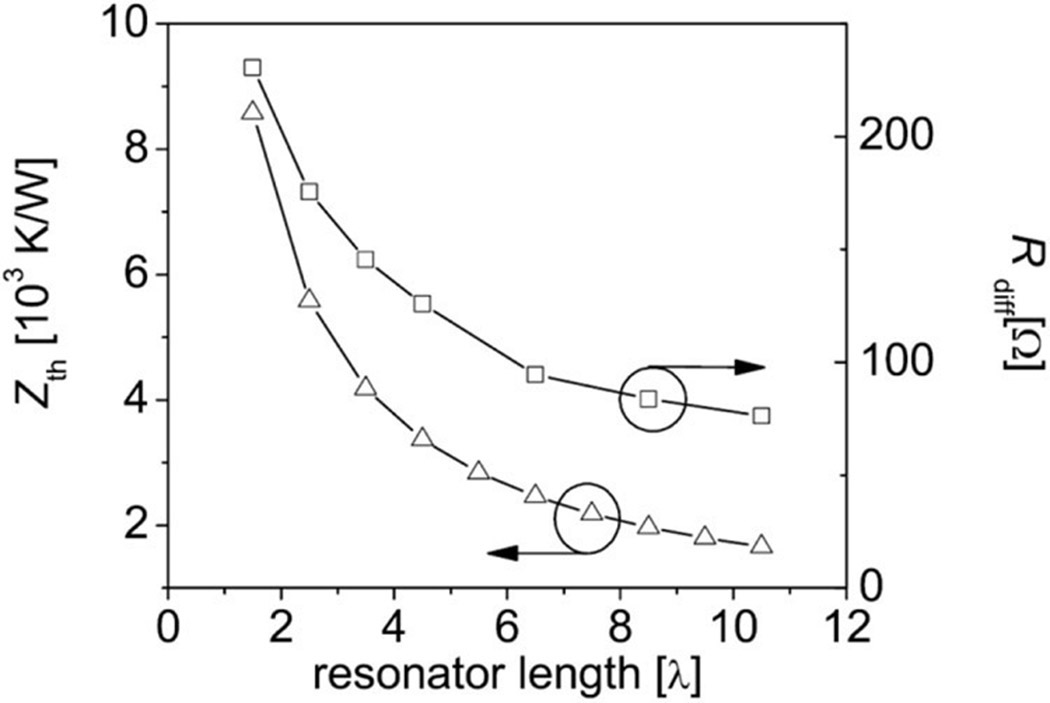 Figure 3. Electrical resistance (Rdiff), denoted by squares, and thermal impedance (Zth), denoted by triangles, close to the threshold gain, shown as a function of cavity length (expressed in wavelengths, λ).2

In summary, we have presented a novel design for VCSELs that are thinner and simpler than state-of-the-art devices. Our design involves substituting DBRs with MHCG mirrors. The results of our simulations indicate that standalone MHCG mirrors can be made with many different materials that are commonly used in optoelectronics, and that the resultant MHCGs can provide high enough reflectivity to sustain lasing. Based on our results, we conclude that MHCG VCSELs can be made to emit at any wavelength between the deep-UV and far-IR, as long as a proper active region is produced. More detailed simulations of a GaAs-based MHCG VCSEL emitting at 980nm show that finding an appropriate cavity length is a compromise between optical loss, thermal impedance, and electrical resistance. The low thickness and design simplicity of our proposed design means that the devices can be more feasibly integrated into larger systems and new opportunities with MHCG mirrors (e.g., vertical to in-plane coupling, higher-order modes, and polarization discrimination) can thus emerge. We expect to experimentally demonstrate VCSELs that include one or more MHCGs in the near future. Our future work will also inevitably involve further optimization of the design to achieve improvements in thermal and electrical conductivity, as well as mechanical stability.