Multi-wavelength sources such as optical parametric amplifiers,1 optical parametric oscillators,2 and supercontinuum sources3 are important for telecommunications, imaging, and emerging data center applications. Kerr nonlinear waveguide devices are excellent platforms for achieving such sources. In particular, platforms that have low nonlinear losses, and large nonlinearities allow efficient, low-power operation. For such devices to be manufactured on a large scale, or seamlessly integrated with electronics, however, they also need to be compatible with CMOS processing (i.e., which is prolific in the electronics industry).

To a large degree, CMOS platforms with large nonlinearities can be achieved in materials that have a large nonlinear refractive index. Confining light as strongly as possible within the waveguide core, however, allows the effective nonlinearity of the waveguide (often known as the nonlinear parameter) to be significantly augmented. Ensuring that the nonlinear platform also has a large linear refractive index is therefore also useful for the creation of the necessary high modal confinements. At the same time, this property allows a large dynamic range of group velocity dispersion to be geometrically engineered in the waveguides. This is a quality that is important for nonlinear phenomena in which phase matching is required. Fortunately, relationships that are governed by Kramers–Kronig relations and Miller's rule4 dictate that a larger refractive index also confers a larger nonlinear refractive index on a material. Furthermore, low nonlinear losses at a particular operating wavelength require that incident photons have an energy that is smaller than the half-bandgap of the material. In CMOS photonics, crystalline and amorphous silicon5 are platforms that possess the largest Kerr nonlinearities. Both these materials, however, suffer from two-photon and free-carrier effects at a wavelength of 1.55μm (commonly used in telecommunications and emerging data center applications). Platforms with larger band gaps have also been used widely for nonlinear integrated optics at 1.55μm, including silica,6 Hydex glass,2 silicon nitride,7, 8 and silicon-rich nitride.9,10 These platforms are generally characterized by smaller linear and nonlinear refractive indices, as well as low losses. Engineering a material's band gap to minimize nonlinear losses, while optimizing the nonlinearity, therefore offers potentially interesting opportunities for nonlinear optics.

To achieve low nonlinear losses and large nonlinearities at the telecommunications wavelength, we have engineered a material platform that contains silicon and nitrogen in an approximate 2:1 ratio.11 We used the inductively coupled chemical vapor deposition technique to synthesize our films. For this process, we used a low temperature of 250°C, as well as silane (SiH4), nitrogen (N2), and argon precursor gases.3, 12 The low deposition temperature makes our films compatible with the backend CMOS process flow. With our growth technique we were thus able to generate an ultra-silicon-rich nitride (USRN) material that has a linear refractive index of 3.1. We use the term USRN to distinguish this material from silicon-rich nitride films that generally have lower refractive indices (less than 2.2) and lower silicon content. Importantly, we characterized the engineered band gap of our material as about 2.1eV, which ensures that the USRN film does not possess two-photon absorption at 1.55μm. We designed the waveguide for high modal confinement within the USRN material so that we can harness the advantageous nonlinear properties of the film and thus maximize its interaction with an incident optical field. The USRN waveguide geometry is shown in Figure 1(a). 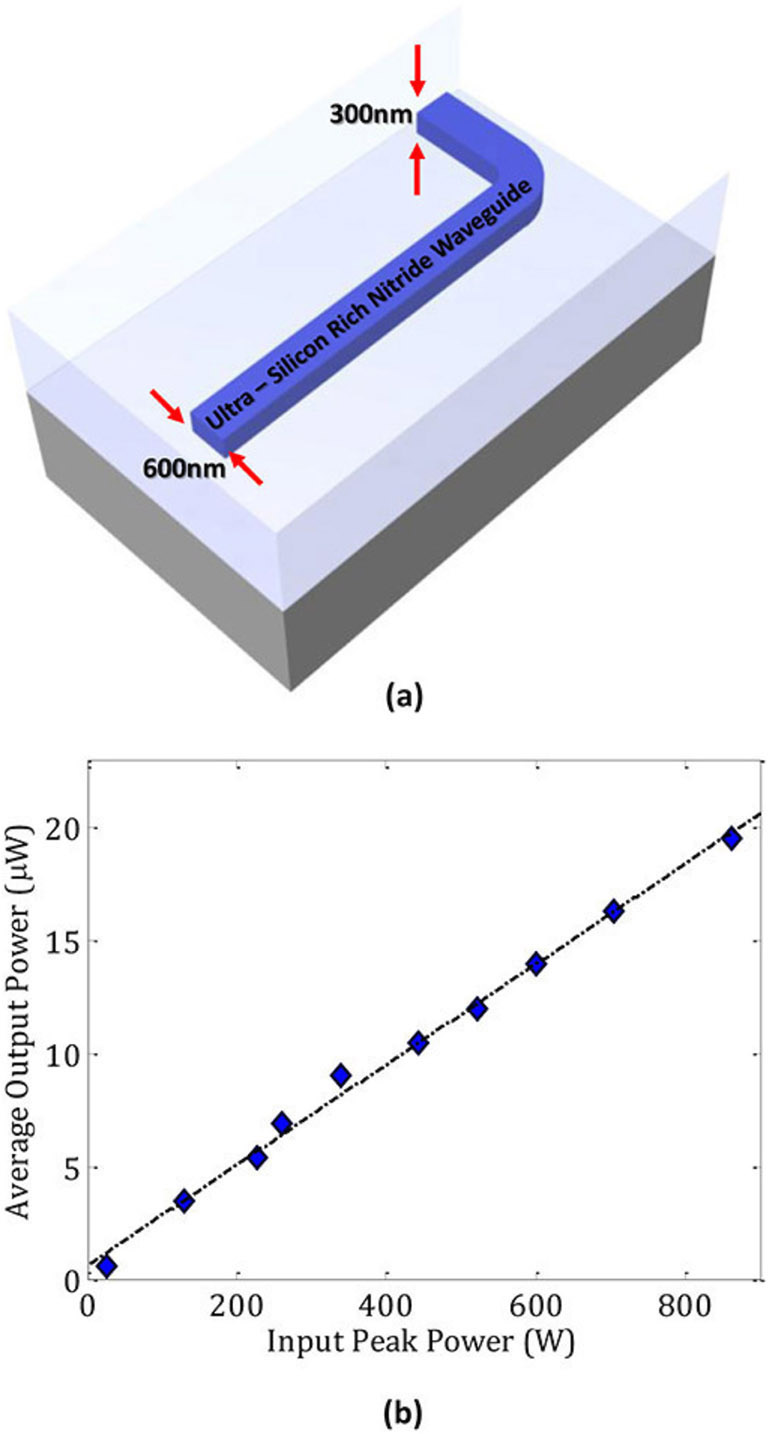 Figure 1. (a) Schematic diagram of the ultra-silicon-rich nitride (USRN) waveguide. The waveguide has a height of 300nm and a width of 600nm. (b) Results of the nonlinear loss characterization experiment, illustrating the linear relationship between the average output power and input peak power of the waveguide.

To characterize the nonlinear properties of our waveguides, we first evaluated the nonlinear loss characteristics of the USRN waveguides. We used a fiber laser with a repetition rate of 20MHz to deliver pulses with a temporal width of 1.8ps. These pulses were then amplified with the use of an erbium-doped fiber amplifier, coupled into the USRN waveguide at 1.55μm, and we measured the output power. We observed that the output power–input power relationship follows a linear profile up to the peak optical intensity that was used (50GW/cm).2 This result implies that there were negligible nonlinear losses, as illustrated in Figure 1(b).

In the next stage of our work, we performed self-phase modulation experiments at 1.55μm. We used a grating-based optical spectrum analyzer to characterize the spectral broadening of the incident pulses. Our results—see Figure 2(a)—indicate that the extent of the spectral broadening increased with the peak power of the incident pump. We also observe that the profile of the broadened pulses is highly symmetrical, which implies that free-carrier effects (common in silicon platforms) are absent. In addition, we compared the broadened pulses with numerically calculated (using the nonlinear Schrödinger equation) pulse spectra, as shown in Figure 2(b). This comparison yielded a nonlinear parameter of 550W−1, which represents the best match to the experimentally measured spectra. This value is 500 times larger than the nonlinear parameter of stoichiometric silicon nitride waveguides. The corresponding nonlinear refractive index for our USRN films is 2.8 × 10−13cm2/W, which is two orders of magnitude larger than for stoichiometric silicon nitride. 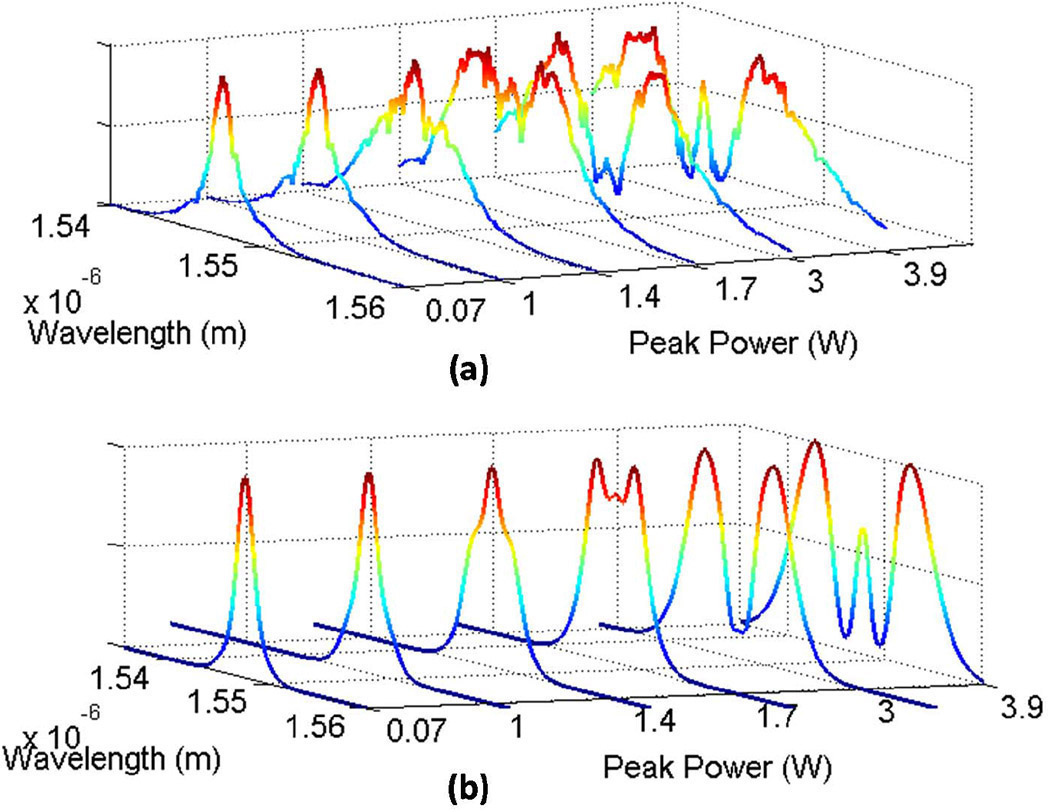 Figure 2. Spectral broadening characterization of 1.8ps incident pulses used in self-phase modulation experiments. The (a) measured and (b) numerically calculated spectra are shown for the pulses as they propagate within the USRN waveguide.

In the final part of our study, we used our USRN waveguides to realize a broadband, multi-wavelength source that is based on supercontinuum generation. Optical pulses, with a temporal width of 500fs, were launched at 1555nm, i.e., where we designed the dispersion to be anomalous (see Figure 3). At the lowest input peak powers, we found that broadening occurred primarily via self-phase modulation. As we increased the input peak power to 75W, however, we observed dispersive wave formation. This helped to extend the range of the supercontinuum to 1.1μm on the blue side of the spectrum. At the highest input peak power of 140W, we achieved a supercontinuum spanning from 1.13–1.75μm at the –30dB level (i.e., a supercontinuum that exceeds 600nm). Furthermore, we believe that the supercontinuum extended well beyond 1.75μm, but we were unable to make characterizations above this wavelength because of the limitations of our metrology tools. 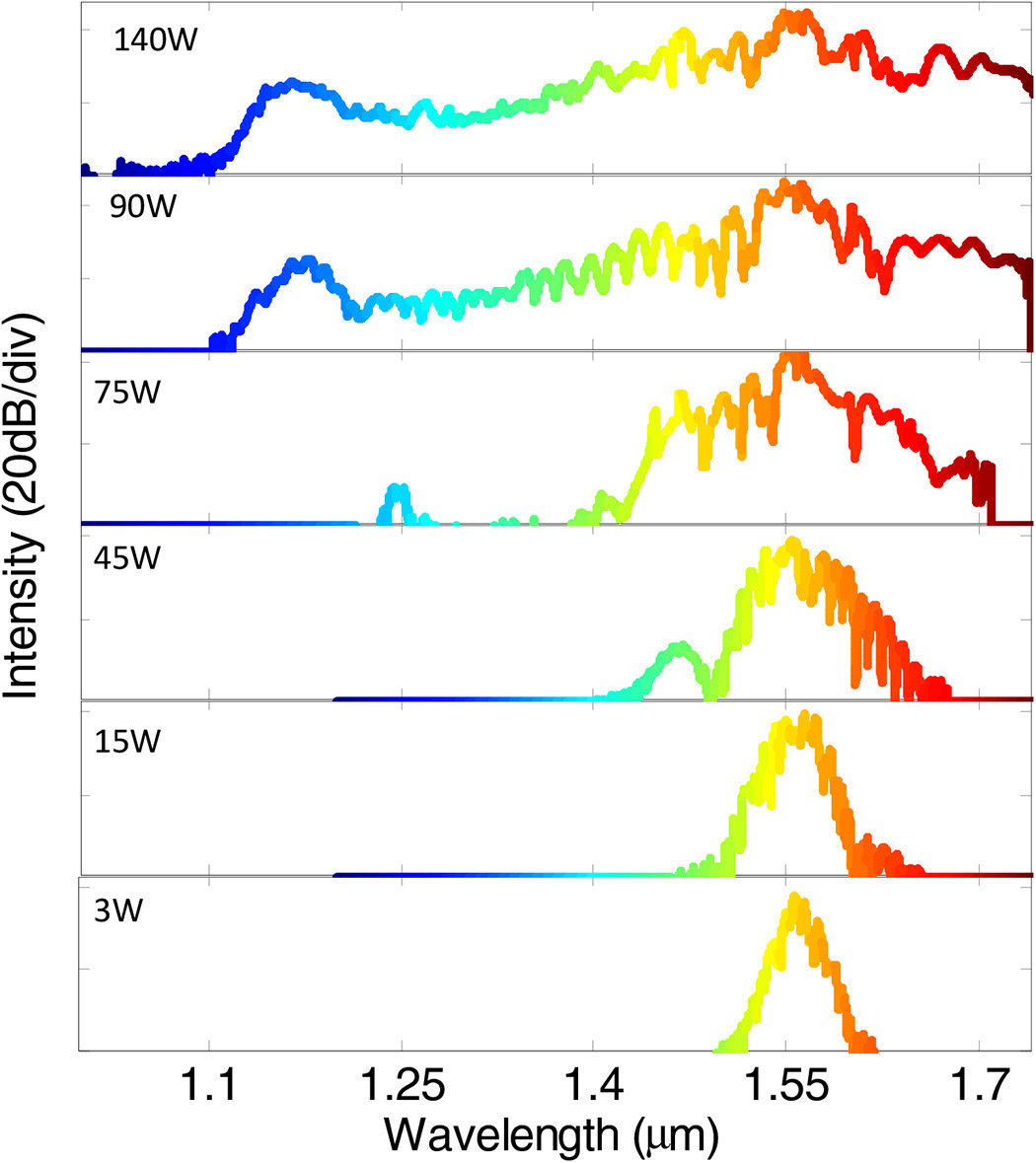 Figure 3. Spectra of the supercontinuum, which spans more than 600nm, generated using the USRN waveguide at different input peak powers.

We have developed and tested a new CMOS platform with which we can achieve low nonlinear losses and large nonlinearities at the telecommunications wavelength. Our platform is based on an ultra-silicon-rich nitride material that has a higher refractive index than more commonly used silicon nitride films. Our USRN platform is thus a highly promising platform for nonlinear CMOS photonics. In our ongoing work, we continue to leverage the advantageous nonlinear optical properties of our USRN material for low-power continuous-wave nonlinear optics,13 resonant enhanced nonlinear phenomena, and parametric gain. The capability of acquiring high nonlinear phase at low power makes our platform potentially ideal for both non-resonant (e.g., low-power optical parametric amplifiers, optical pulse compression for time domain multiplexing, and phase conjugation) and resonator-enhanced applications (e.g., low-power optical parametric oscillators).

Dawn Tan is an assistant professor and leads the Photonics Devices and Systems group. Her research interests include the experimental study of integrated linear and nonlinear optics, optical interconnect technologies, CMOS nanophotonics, and quantum optics. She was previously a visiting professor at the Massachusetts Institute of Technology Microphotonics Center and a senior engineer at Luxtera. She obtained her PhD and MS from the University of California, San Diego, and her BASc from the University of British Columbia, Canada.