Penetrating cortical microelectrodes are used in a variety of applications, from stimulation therapies for Parkinson's disease and epilepsy to neural recording for active control of neural prostheses.1 Over time, the biological response (for example, microglial and astrocyte reactivity) tends to encapsulate the electrode, rendering it a less effective interface to local neurons.2 Moreover, the electrode materials can gradually degrade from long-term exposure to tissue.3 To develop new technologies that extend the lifetime of penetrating electrodes, we must first understand the precise nature of chronic brain-electrode interaction. Most of what we know about the biological response to penetrating electrodes has been gained by post-mortem immunohistological analysis.4 However, interpretation of histological results is difficult in the presence of large subject variability, and histological methods are not easily amenable to the study of dynamic processes.

In vivo optical imaging can provide a window into the tissue response surrounding an implanted electrode, owing to its ability to achieve exceptionally high resolution, down to the cellular level. Two-photon laser scanning microscopy (TPLSM) has been a mainstay in neuroscience for around 20 years, enabling exquisite images of neuronal structure and activity as well as the response of support cells.5 Optical coherence tomography (OCT) is also gaining acceptance for neuroscience applications, particularly with the recent enhancement for intrinsic contrast angiography.6 TPLSM and OCT share the ability to optically section tissue with very high axial resolution, though by different mechanisms. TPLSM is able to resolve fluorescent signals confined to genetically labeled cells, but requires extrinsic dye for angiography. Speckle and scattered light make OCT visualization of neurons and transparent cells difficult, but speckle contrast allows quantitative optical coherence angiography. Thus, TPLSM and OCT can provide complementary information when used to explore the chronic neurovascular response to penetrating cortical microelectrodes.

We have developed a multimodal optical imaging platform that uses both TPLSM and OCT to perform long-term imaging of electrodes implanted in transgenic mice (Thy1-eGFP). We prepared the mice for long-term imaging with a craniotomy and window implantation (inserting an optically clear window in the skull), which causes a superficial vasodilatory response (widening of the blood vessels) that we have previously characterized.7 We inserted under the window Michigan-style microelectrodes, with one, two, and four shanks, and imaged the mice with TPLSM and OCT over the course of several months.

The response to electrode implantation was complex, multiphasic, and varied from animal to animal. Figure 1 shows OCT and TPLSM images from a subject with a single-shank electrode. The OCT images are maximum intensity projections (MIPs) for a slice 100μm thick at a depth of ∼150μm, near the location of the electrode tip. The TPLSM images are MIPs for a slice 50μm thick taken at a more superficial depth plane, where the dendrites are most dense. Two TPLSM regions are shown: one near the center of the image, away from the electrode, and one near the top, where the electrode was inserted. The baseline images, taken before electrode insertion, show a normal capillary network and dendrites. After 50 days, the existing vessels were dilated and new vessels had grown in the superficial layers, while the capillary network in the center of the image was relatively stable. While individual dendrites are resolved at 50 days post insertion, their overall appearance is altered. The TPLSM image centered on the electrode shows dendrites stretched over the electrode. Each animal reacted differently to the implanted electrodes. Therefore, the challenge in interpreting results from this investigation is to find common characteristics of the tissue response, while controlling for variables related to the imaging (for example, fluorescent signal loss from superficial vessel growth) as well as the craniotomy and window implantation surgery. 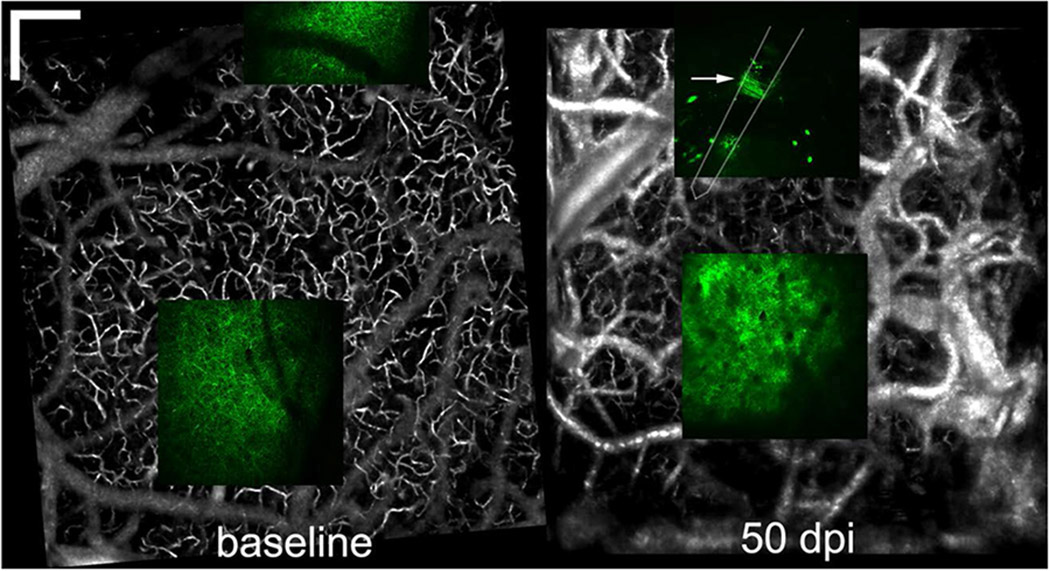 In summary, our multimodal optical imaging platform has successfully imaged the chronic tissue response to penetrating electrodes. Our future work will include longitudinal tracking of electrophysiological recordings and optical imaging to correlate the functional and structural response. We will also use other functional optical imaging modes to augment existing TPLSM and OCT channels.

This work was supported by the Defense Advanced Research Projects Agency, and grants from the Food and Drug Administration Office of the Chief Scientist, Medical Countermeasures Initiative, and Critical Path Initiative.

Daniel X. Hammer has more than 20 years' experience in the invention, development, and application of biomedical optics to a broad range of interdisciplinary research programs. He is the deputy director of the Division of Biomedical Physics.

Meijun Ye has more than 10 years' experience in investigating cellular, circuitry, and systemic properties of the central nervous system with electrophysiological, optical, and genetic tools. She is currently a staff fellow of the Division of Biomedical Physics.

Andrea Lozzi is a biomedical engineer with experience in optical imaging. For two years, he was part of a research group in the Division of Biomedical Physics. He is currently a PhD student.

Adam Boretsky is a biomedical engineer investigating the bioeffects of optical radiation at the Air Force Research Laboratory. He has more than 10 years' experience in translational research involving diagnostic imaging, laser-tissue interaction, phototherapy, and drug delivery.

Cristin Welle is a neurophysiologist with experience in developing devices that interface with the nervous system. For five years, she ran a research group in the Division of Biomedical Physics.