The 1970s witnessed both the initial miniaturization of devices (i.e., toward the nanoscale) and the simultaneous birth of heterostructures. In nanoscale materials, radical changes in the characteristics of particles are observed as they move from classical to quantum behavior. It has previously been demonstrated that quantum nanosystems integrated in devices have enhanced performance and surprising properties.1 A particularly active current area of research is thus in the analysis of the fundamentals of this performance enhancement.2 Such work should lead to a deeper understanding of next-generation nanoscale technologies, as well as greater efficiencies in the devices.

In the past there have many approaches to analyzing the operation of nanodevices and nanomachines.3 In particular, the field of thermodynamics has recently re-emerged as a way to statistically assess human observations of these systems. At the nanoscale, however, thermodynamics must be able to address several key issues. The most important of these questions is whether quantum thermodynamics obeys the three famous laws of thermodynamics (i.e., energy conservation, non-negativity of entropy production, and the zero-temperature limit).

In our work, we have developed a thermodynamic approach for understanding optoelectronic conversion at the nanoscale.4 In this technique, we use a powerful quantum statistics methodology that is known as the nonequilibrium Green's function (NEGF) formalism.5, 6 This formalism allows us to treat interacting open systems with the use of expectation value functions instead of operators, which reduces the complexity of the problem. The NEGF formalism has already been used with much success for transistor simulations, and it is now commonly implemented in semiconductor industry research and development activities.7 We thus propose that the NEGF formalism can be used to extend the method for calculating energy fluxes and to test the second law of thermodynamics in an optoelectronic conversion system.

Following previous work,8,9 we derived formal expressions for all particle, energy, and heat currents inside a nanodevice that only interacts with light (i.e., that is within the radiative limit). We relied on the self-consistent Born approximation to treat the electron–photon interactions (we ignore electron–phonon and electron–electron scattering) within the NEGF formalism. We then tackled these derivations using our knowledge of new functions that mix electron and photon operators. In addition, heat current expressions allow us to formulate the entropy current that flows from the interacting region of the optoelectronic nanodevice to the three reservoirs, i.e., two electronic reservoirs (e.g., electrical lines) and a photon bath (e.g., the Sun).

To our surprise, we found that if we consider only these three thermal reservoirs, the resulting entropy production can be negative. This would represent a violation of the second law of thermodynamics. To resolve this problem we have to consider a fourth thermal reservoir separately. This fourth reservoir originates from the photons that are spontaneously emitted by the region of the nanodevice that interacts with the light. More precisely, we introduce the emission temperature to obtain the non-negativity of the entropy production. Moreover, verification of the second law of thermodynamics bounds the emission temperature values.

We have also applied this model to photovoltaics. We have thus recast steady-state entropy production as a difference between the maximum achievable efficiency of the reversible nanodevice and the thermodynamic efficiency. The maximum efficiency term includes losses that are caused by emission processes. It is therefore lower than the standard Carnot efficiency (see Figure 1). In general, our results illustrate that optoelectronics and thermodynamics can be combined naturally to identify the key aspects of energy conversion at the nanoscale. Our work can therefore provide a route toward efficient sustainable nanotechnology. 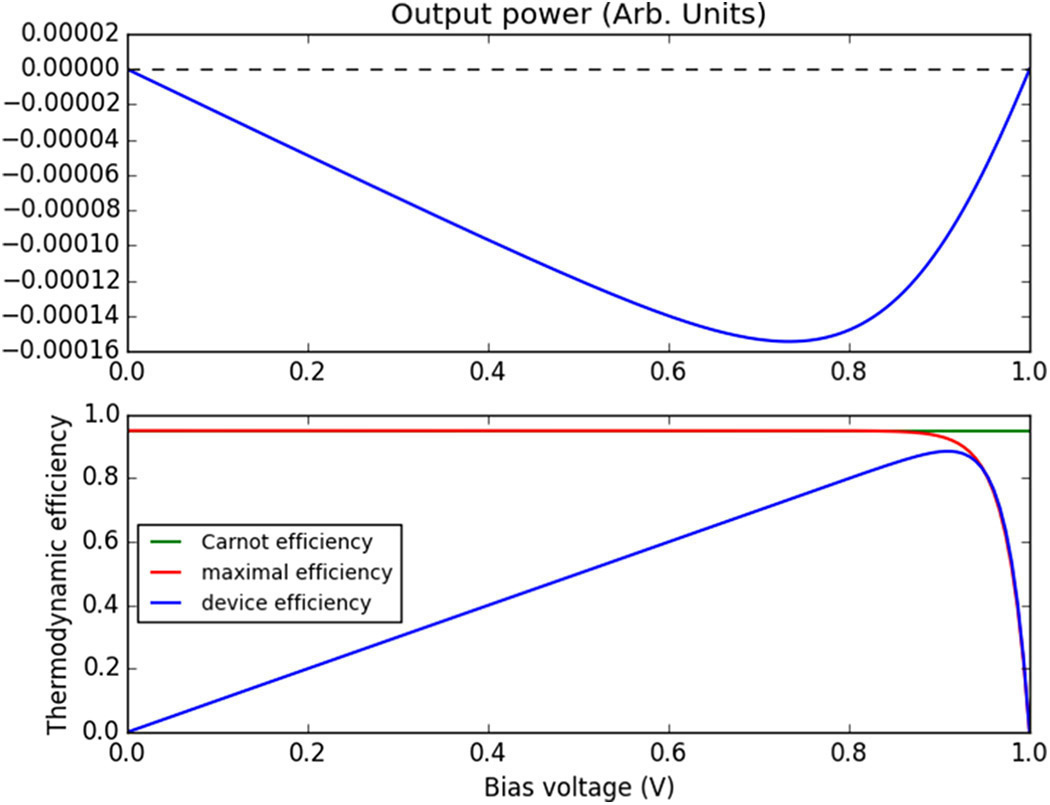 In summary, we have developed a new thermodynamic model to study optoelectronic conversion processes in nanoscale devices. Our theoretical work provides several new insights into the behavior of such optoelectronics, including the definition of their thermodynamic efficiency, and the meaning of the entropy current. In addition, we have been able to define effective and local thermodynamic parameters, as well as the maximum efficiency that can be achieved in the nanodevices. Our approach opens up new ways to understand hybrid photovoltaic–thermoelectric devices, such as the recently proposed cooling from a heating refrigerator,10 or the joint cooling and energy production scheme.11 In the next stage of our research we will extend our approach to the study of time-dependent operations in nanoscale optoelectronics, for which thermodynamic parameters such as entropy current raise new inconsistencies12 and still need to be defined.

The authors are grateful for financial support from the CNRS Cellule Energie ICARE project.

Katawoura Beltako is currently pursuing a PhD under the supervision of Fabienne Michelini. He is interested in time-resolved transport in quantum optoelectronic nanodevices.

Adeline Crépieux is an expert in the subject of charge and heat current fluctuations in nonequilibrium interacting nanodevices from Green's function and Meir-Wingreen formalisms.