The dream for integrated photonics is to develop on-chip optical components that could eventually replace electronic circuits by offering greater speed, energy efficiency, and potential for miniaturization. Inspired by this goal, many innovative photonics devices are currently being designed, e.g., arrays of micro-scale waveguides to control the propagation of photons on a silicon chip.1–4 Along with these advances, some surprising connections to other areas of physics, such as condensed matter and ultracold atomic gases, have also been discovered. This has ignited the hope that integrated photonics could be useful—not only for applications—but also to cast light on cutting-edge research topics in fundamental science.

The silicon micro-ring resonator is an important workhorse within integrated photonics. In these devices, light resonates around a ring, akin to a quiet whisper traveling around the edge of a circular room. In a periodic array of such ring waveguides, photons can ‘hop’ between different rings (analogous to electrons tunneling between atoms in a crystal). It is well known from solid-state physics that this simple starting point leads to many interesting phenomena. For example, the behavior of the photons will depend on the dimensionality and geometry of the resonator array, which provides great design flexibility. Even more remarkably, such systems can have ‘topological’ features, i.e., characteristics that cannot be changed without doing something drastic to the system (just as a sphere cannot become a doughnut without tearing a hole through its center). In integrated photonics, the exploitation of topological physics could be promising for practical applications,2–4 for example, by allowing light to propagate in only one direction.

A significant advantage of silicon ring resonator arrays over traditional solid-state experiments for the exploration of topological physics is the control afforded over the design of the array during fabrication. We have recently proposed4 that this advantage can be pushed even further by using a powerful technique that was first pioneered for work in ultracold atomic gases6 to increase the dimensionality of an array, i.e., with an extra ‘synthetic’ dimension. By coupling the different resonator modes of a ring (denoted by the colored levels in Figure 1), we can allow photons to hop between the different modes of the same micro-ring, just as they can hop between the different rings. We can think of these different modes as indexing the new synthetic dimension. In this way, we can make a 1D chain of micro-ring resonators behave like an effective 2D system (or make a 3D array act like it has four dimensions, as in Figure 1).4,5

Figure 1. Creating a four-dimensional (4D) photonic system from a 3D array of silicon ring resonators (left) and a synthetic dimension (w). The synthetic dimension is provided by the different modes of each resonator (denoted by the colored levels). These are almost equally spaced in frequency and can be coupled by modulating the dielectric tensor of each cavity.4,5 This modulation allows light to ‘hop’ up or down in frequency, just as it can hop between the different silicon rings in a 3D spatial array. An optical analogue of the 4D quantum Hall effect can be accessed by carefully designing properties such as the spatial dependence of the cavity modulation and the position of the off-resonant link resonators (blue) relative to the main resonators (black).

Our use of a synthetic dimension reduces the on-chip footprint of an optical device, as fewer resonators are needed to simulate the same effective array. It also provides a natural way to engineer and control topological features, i.e., by carefully designing the inter-mode coupling. This is particularly exciting because novel topological phenomena, such as the so-called four-dimensional (4D) quantum Hall effect,7 have been predicted if it becomes possible to push beyond the 3D physical world to access 4D physics.

The quantum Hall effect was first discovered experimentally, in two dimensions, in the early 1980s. In this effect, electromagnetic fields generate a current of electrons that can be quantized with remarkable precision. Indeed, it was soon revealed—as a first example of a topological response8—that the topological quantization is so robust it can even be used as a measurement standard for fundamental constants. Theorists later proposed that there could be a whole family of quantum Hall effects, with new characteristics emerging every time the dimensionality increases by two. This prediction puts the next quantum Hall effect in four dimensions,7 which is out of the reach for traditional experiments. With our recent work, however, we have shown that the 4D quantum Hall effect may finally be realized with our introduction of a synthetic dimension into ultracold atoms,9 or into integrated photonics.4

The topological features of our 4D model stem from careful design of the coupling between rings, through off-resonant link resonators,2 and the coupling between modes (through a modulation of the dielectric tensor).4 In this work,5 we discuss how to exploit the pumping and losses that are present in cavity arrays, to realize an optical analogue of the 4D quantum Hall effect. As we detail, key signatures of 4D topological physics can be observed in the displacement of a driven-dissipative photon steady state. For example, as shown by the numerical simulations in Figure 2, there is a clear displacement of the center of the steady state only in the presence of both perturbing artificial electric and magnetic fields. This characteristic response is analogous to the 4D quantum Hall current that would flow in an electronic system. We also show how such measurements could be used to quantitatively extract 4D topological features, thus paving the way toward future experiments. 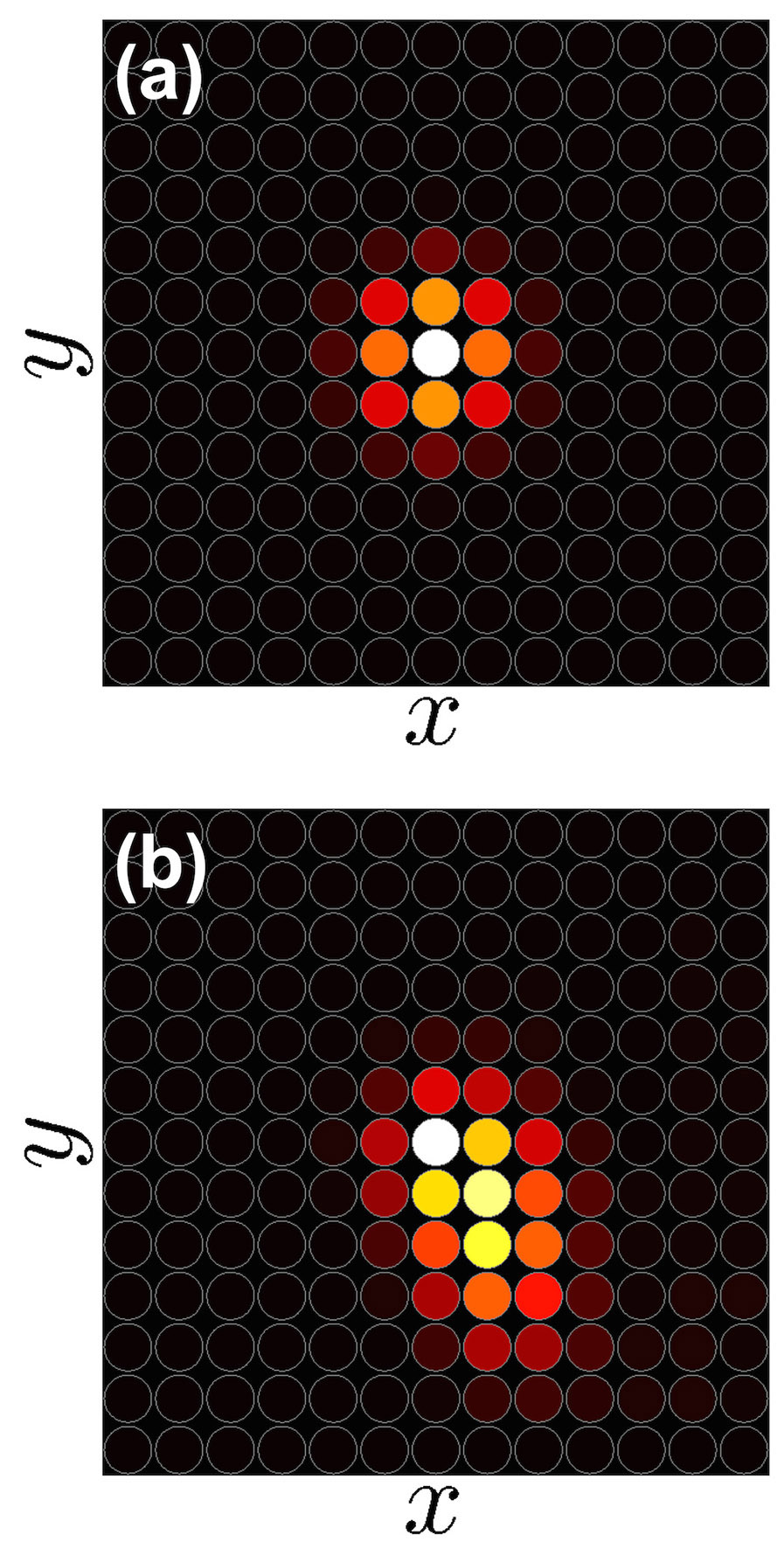 In our work, we have developed a new technique with which we can introduce a synthetic dimension into integrated photonics. This technique involves coupling different modes of a micro-ring resonator to facilitate photon hopping. This opens up the prospect of exploiting higher-dimensional physics, i.e., to control and engineer the propagation of light in new ways. Our approach may also be used to access novel topological phenomena (e.g., the 4D quantum Hall effect) for the first time. In our future work, we hope to investigate the practical applications of higher-dimensional topological effects in the design of on-chip optical circuits.

Hannah Price completed her PhD in 2013 at the University of Cambridge. She then became postdoctoral researcher, and now a Marie Sklodowska-Curie fellow, at the INO-CNR BEC Center. She is currently working on topological effects in photonics and ultracold gases.

Tomoki Ozawa completed his PhD in 2012 at the University of Illinois at Urbana-Champaign. Since then he has been a postdoctoral researcher at the BEC Center.

Iacopo Carusotto completed his PhD in 2000 at the Scuola Normale Superiore in Pisa, Italy. He then conducted postdoctoral research at the Laboratoire Kastler Brossel in Paris, France. Since 2003 he has been a senior researcher at the BEC Center, where he leads research activity in different fields of nonlinear and topological quantum optics.

Nathan Goldman is a research associate at the Fonds de la Recherche Scientifique (Belgium) and a professor at ULB. In his research he mainly focuses on topological states of matter and synthetic gauge fields in ultracold gases. Recently he has also contributed to a series of works devoted to photonic lattices.

Oded Zilberberg completed his PhD in 2012 at the Weizmann Institute for Science, Israel. Since then he has been a postdoctoral researcher at ETHZ. His research is centered on the study of electronic and photonic quantum engineered systems, along with all of their modern ramifications (e.g., topology, out-of-equilibrium, controllability), as well as their consequences for fundamental physics and device applications.