Fresnel lenses are made of stacked concentric rings, a design that allows the construction of large-aperture lenses with relatively small weight and thickness. However, their structural discontinuity means they cannot be refined enough to act as primary optics for large telescopes. Overcoming limitations on efficiency and spectral bandwidth, and the technological complexities of fabricating a multilevel Fresnel lens of relatively large size, have so far proven a challenge, even for organizations at the forefront of optical developments.

The fourth-generation (4G) optics technology revives the prospect of building large, thin, and nearly weightless lenses for both deep-space optical communications and imaging telescopes. The 4G optical components are essentially waveplates: thin polymer films with optical anisotropy due, in particular, to the presence of liquid crystalline molecules in their structure. We obtain the specific performance of these components by modulating the orientation of the anisotropy axis in the plane of the waveplate.1 This is in contrast with previous-generation optics, which were characterized by the modulation of lens shape or thickness (1G), the refractive index (as in Bragg gratings and gradient-index lenses, 2G), or the magnitude of the optical anisotropy (as in liquid crystal displays, 3G). A linear variation of the orientation of the anisotropy axis in the plane of the waveplate results in a prism-like action. These components are often referred to as cycloidal diffractive waveplates due to the pattern characterizing the spatial distribution of the anisotropy axis. The variation of the orientation angle around an axis perpendicular to the plane of the waveplate yields the equivalent of a spiral waveplate, often referred to as a vector vortex waveplate. By varying the angle proportional to the square of the distance from the axis (parabolic variation), we obtain a lens: see Figure 1.2 The efficiency of 4G optics reaches 100% for each of the circularly polarized components of radiation for wavelengths fulfilling the half-wave phase retardation condition. This is the state wherein the phase shift introduced by the waveplate between the two orthogonal polarization states of light is equal to half wave. Given their nature, we can make the 4G optical components broadband, particularly using techniques similar to those used in the fabrication of conventional broadband waveplates. 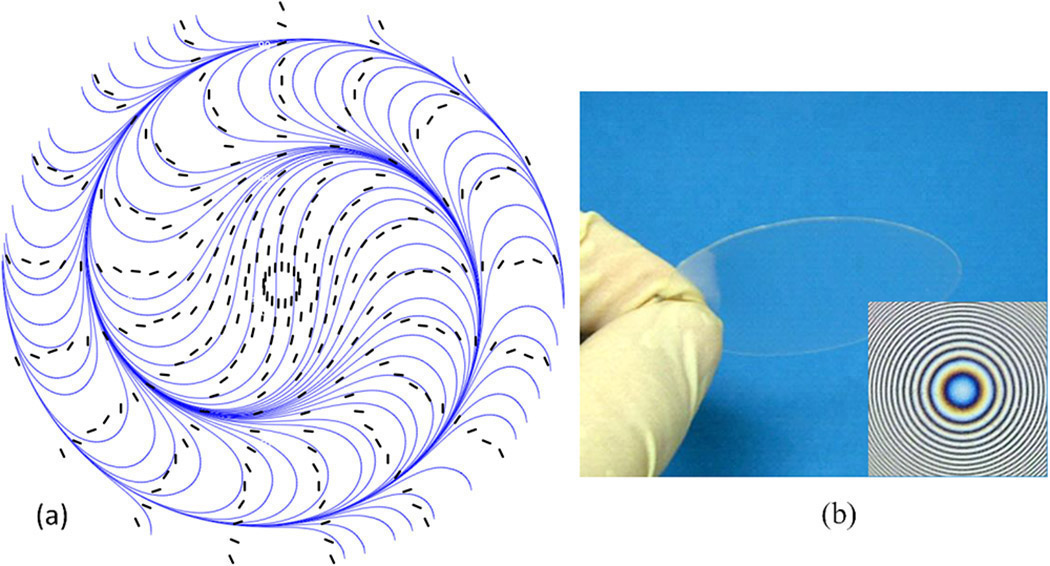 Figure 1. (a) The structure of the waveplate lens. The local orientation of the optical axis is shown both as line segments and as a continuous pattern. (b) The waveplate lens as a micrometer-thin-film coating on a plastic is revealed only between crossed polarizers (insert).

Half-wave plates are commonly used for rotating the plane of a linearly polarized light by an angle 2α with respect to the polarization of an input beam, where α is the angle between the input polarization direction and the waveplate axis. For a circular polarized beam, this change in angle translates into a phase shift and reversal of the polarization handedness. Thus, we can generate a ±2α phase shift in a circularly polarized beam with the sign of the phase shift depending on the polarization handedness. This phase, known as geometrical or Pancharatnam–Berry phase, plays in full force for a waveplate with spatially modulated anisotropy axis α=α(x; y), where x and y are the coordinates in the plane of the waveplate.

Recent advances in liquid-crystal-polymer materials and alignment technology allowed us to produce the desired modulation patterns at high spatial frequencies and with high optical quality: see Figure 2. Therefore, to make a lens or any other optical component, we can simply spin or spray a droplet of a polymerizable liquid crystal on a flat substrate pretreated for inducing boundary conditions for the corresponding alignment pattern. The latter requires exposure of the substrate coated with a photoanisotropic material to, typically, a UV light beam of correspondingly modulated polarization pattern. The whole fabrication process takes only a few minutes, the cost is small compared to other high-quality optics, and we find no discontinuities in the structure of the optical element. We can produce diffractive waveplate films on any desired substrate or transfer to it. In addition, the liquid-crystal-polymer coatings can impart imaging capability to flat mirrors. 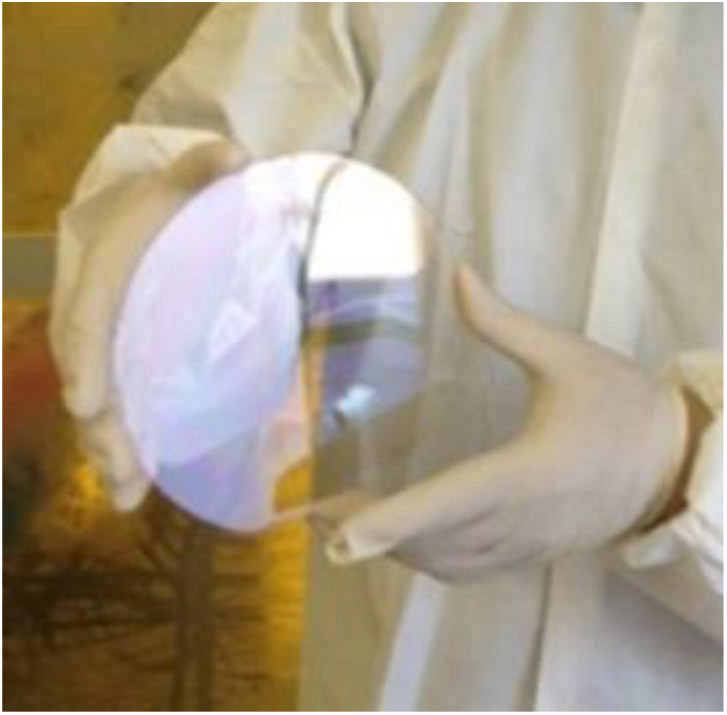 Our analysis has shown that, in combination with specially designed receiver mirrors coated with diffractive waveplates, we can significantly enhance the bandwidth for diffraction-limited functionality for optical communication and imaging applications of large telescopes. A system of waveplate lenses can also exhibit polarization-independent imaging functionality. In the future, we will investigate the novel opportunities provided by 4G optics for applications such as large-aperture space-based telescopes and space communications.

This work was supported by the NASA Innovative Advanced Concepts (NIAC) Program and the US Army Natick Soldier Research, Development and Engineering Center.

Nelson Tabiryan is president of BEAM Co. and a NIAC fellow developing 4G optical materials and technology. He was a keynote speaker at the SPIE Optics and Photonics Liquid Crystal conference and a program committee member for the Emerging Liquid Crystal Technologies conference at Photonics West.

David Roberts is a chief systems architect at BEAM Co. His interests include advanced optical systems for the US Department of Defense and NASA applications.

Eugene Serabyn works on high-contrast interferometric and coronagraphic approaches for the detection of exoplanets.

Diane Steeves and Brian Kimball are members of the Nanomaterials Science Team. They perform long-range investigations on the interactions and effects of electromagnetic radiation with periodic structures and developmental optical materials.