The fundamental nature of the diffraction limit means that it forms an unavoidable barrier in any far-field imaging system. In addition, Abbe, Rayleigh, Sparrow, and Houston resolution criteria show that the limit of lateral resolution in such systems is about half the wavelength (λ). The objects of nanoscale science and technology (e.g., sub-cellular structures, viruses, proteins, and carbon nanotubes), with dimensions less than 100nm, therefore cannot be resolved with the use of a standard optical microscope. New physical principles (e.g., detection of optical near-fields or the use of strong non-linear effects) are thus needed to increase the resolution of imaging systems beyond the diffraction limit.1

In recent years there has been remarkable success in this field with super-resolved fluorescence (FL) microscopy. This culminated in the 2014 Nobel Prize in Chemistry being awarded to Eric Betzig, Stefan Hell, and William E. Moerner for their pioneering work. In FL microscopy, fluorescence labeling is used to ‘highlight’ sub-cellular structures and make them visible. This approach, however, also has many drawbacks (e.g., photobleaching). In addition, and most importantly, staining the biological samples with dyes is not always a desirable option.2 Alternatively, label-free microscopy (LFM) relies on effects such as transient absorption,3 super-oscillation,4 and hyperlens imaging,5 but the development of this technique is proceeding more slowly than FL microscopy for two reasons. First, the LFM mechanisms rely on subtler light-scattering processes in nanoscale objects, resulting in lower effective image contrasts. Second, the experimental quantification of resolution is complicated in LFM because of the lack of suitable ‘point’ sources.

Nanoscopy with microspheres has emerged as a surprisingly simple imaging technique.6 In this method, a dielectric microsphere is placed in contact with the investigated object and its virtual image is observed with a conventional microscope, as illustrated in Figure 1(a–c). This approach can be used in conjunction with both FL and LFM imaging. The study of the mechanisms of this effect has attracted considerable attention because of the simplicity, large impact on microscopy, and the almost elusive origin of super-resolution from microspheres.7, 8 Initially, it was proposed that the super-resolution was related to the extremely sharp focusing of light by the mesoscale spheres.6 However, the width of photonic jets is slightly less than λ/2 only in small microspheres (i.e., with diameters of several λ).9 The focusing enhancement, therefore, seems to be insufficient to explain the super-resolution that is typically observed with larger spheres. The resonant excitation of whispering gallery modes can slightly improve the resolution,7 but their selective excitation is unlikely in experiments that have broadband illumination. Other mechanisms include the resonant enhancement of evanescent fields in nanoplasmonic objects, as well as transformation of evanescent waves into propagating waves. All these possibilities, however, require further experimental verification. 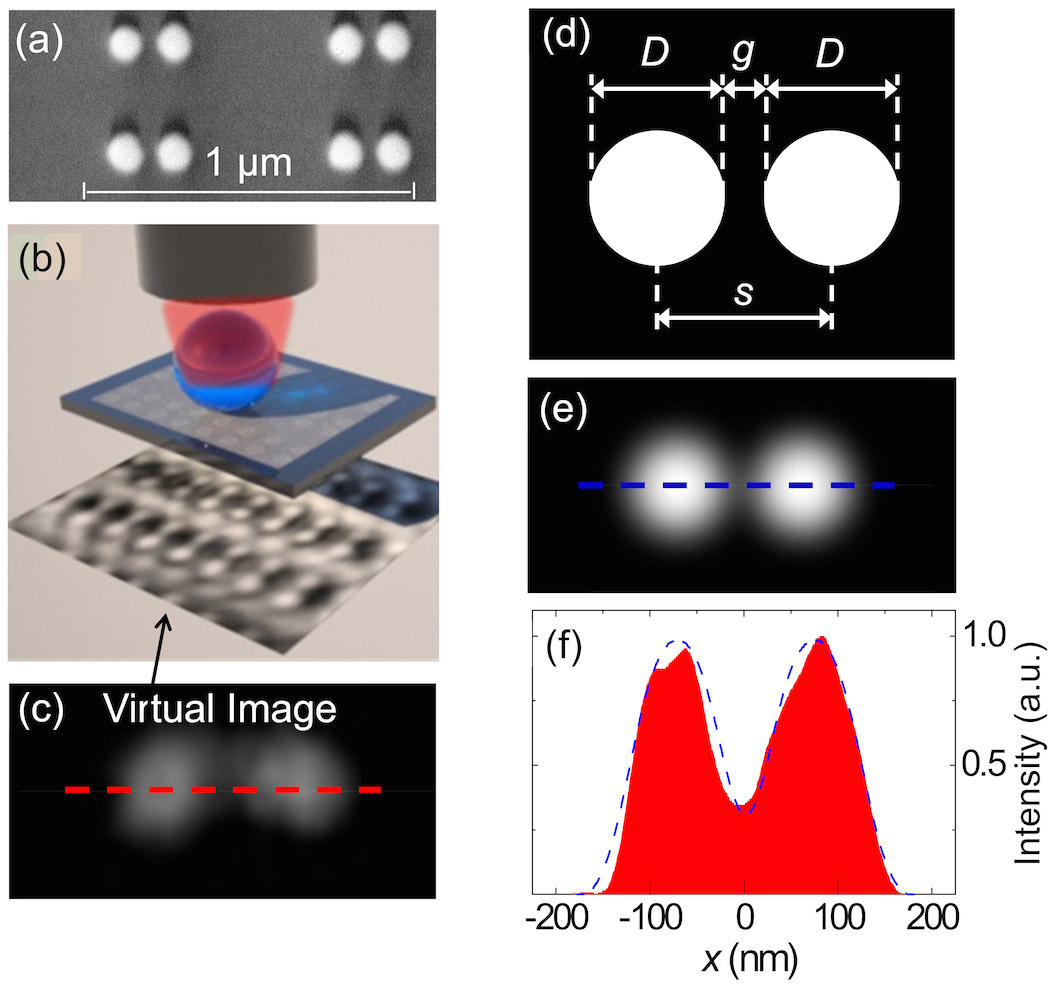 Figure 1. Illustrating various aspects of nanoscopy with microspheres. (a) Array of gold dimers with diameter (D) of 110nm and edge-to-edge gap size (g) of 40nm. (b) Microscope setup. (c) Measured virtual image. (d) Schematic drawing of a two-circle object shown in (a) with center-to-center separation (s) of 150nm. (e) Result of convolution of the two-circle object and the point spread function with a width of about λ/7 (where λ—the wavelength—is 405nm). (f) Comparison of the calculated (blue dashed line) and measured (red) image intensity profiles (along the x direction) in arbitrary units (a.u.).

We made an important advancement in the microsphere nanoscopy technique with our proposal of using high-refractive-index (i.e., n greater than 1.8) microspheres immersed in liquids or embedded in slabs.10, 11 It therefore becomes possible to use this technology for practical applications, e.g., imaging biomedical objects.12, 13 Furthermore, imaging with high-index, liquid-immersed spheres can produce higher quality and better resolution images of nanoplasmonic structures.11, 14–16

To quantify the resolution of LFM, larger scale arrays containing objects with recognizable shapes (e.g., periodic stripes, stars, holes, dimers, or clusters) are often used.4, 6,11,16 In this concept, the resolution can be estimated on the basis of the minimum feature size that can be discerned in the optical images. For closely spaced metallic cylinders (or holes), an edge-to-edge gap—see Figure 1(d)—is usually accepted as a resolution measure. We have shown, however, that this approach can provide overestimated resolution values and have developed a more rigorous quantification of super-resolution.17–21 This method is based on a convolution of the arbitrarily shaped objects with the 2D point spread function (PSF). Although this is a standard far-field optics approach, we demonstrated that the microsphere nanoscopy requires PSF widths narrower than the diffraction limit for fitting the experimental images. In this sense, this method can be considered as an integral form of the super-resolution quantification that is accepted for ‘point’ sources in FL microscopy (i.e., where the PSF width can also be narrower than the diffraction limit). We have thus demonstrated successful imaging of metallic dimers (see Figure 1) with a resolution of about λ/7, which is well beyond the classical diffraction limit.

To develop a novel optical component for enhancing a microscope's resolution, we fabricated polydimethylsiloxane (PDMS) slabs, with embedded high-refractive-index barium titanate microspheres.17–19 We have also shown—for the first time—that these slabs can provide optical super-resolution imaging, as well as a surface scanning capability.17–19 Our PDMS slabs—see Figure 2(a)—adhere to the surface of nanoplasmonic structures, which results in imaging of gold dimers and bowties with a resolution of about λ/6–λ/7. In addition, the PDMS slabs can be translated along the surface of investigated samples after liquid lubrication. In this case, the resolution is initially diffraction limited, but the super-resolution gradually recovers as the lubricant evaporates.

Microfibers can also be used as another type of contact lens,22,23 i.e., to provide magnification and super-resolution perpendicular to its axis, as shown in Figure 2(b). To quantify the imaging resolution for the microfiber case, we used a convolution of the arbitrarily shaped objects with the PSF of the cylindrical lens.20 The resolution is about λ/6 in the direction perpendicular to the fiber, and the field of view is hundreds of times larger than when microspheres are used. We have also demonstrated—see Figure 2(c)—that microsphere-assisted imaging can be extended into the deep-UV range.21 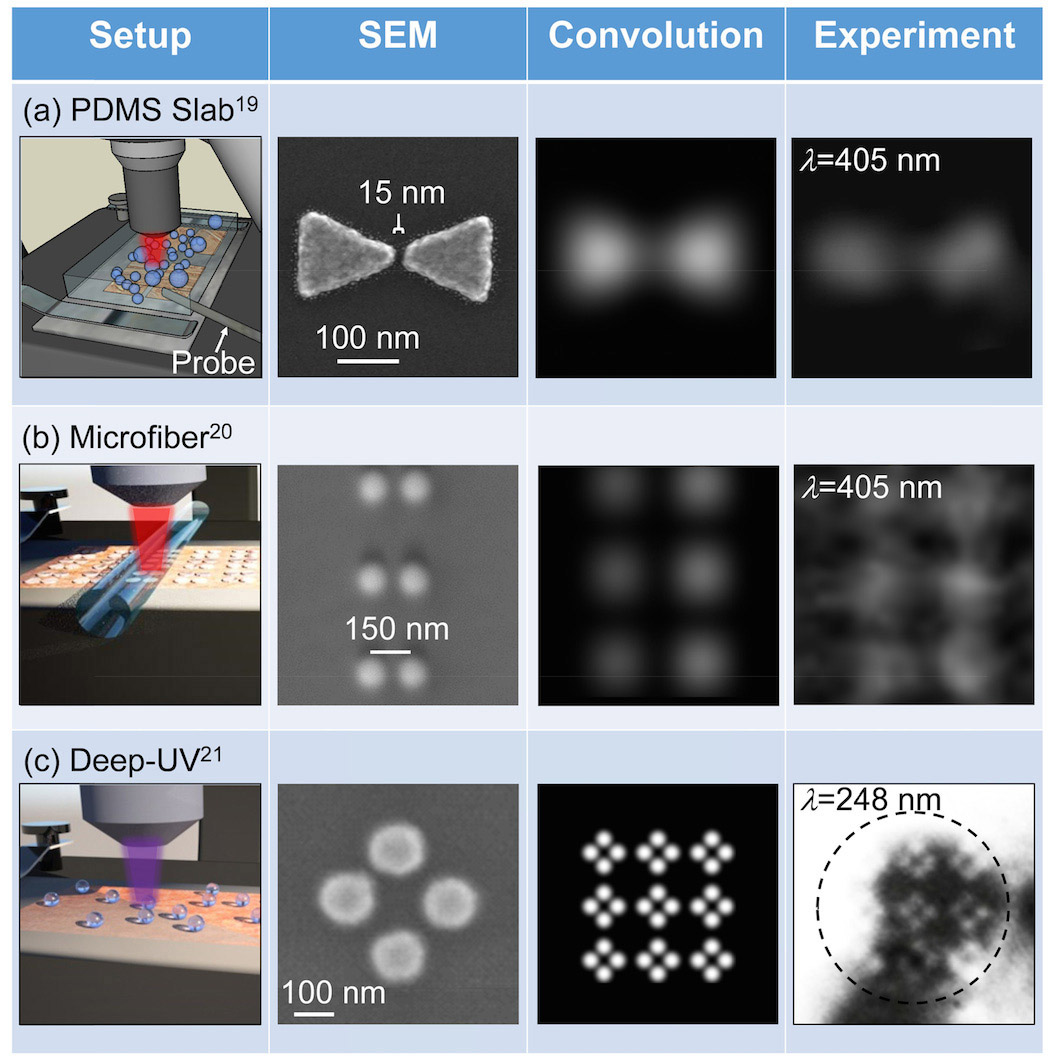 Figure 2. Experimental setup, scanning electron microscope (SEM) image of the object, convoluted image, and experimental image obtained (a) through a 4.5μm barium titanate microsphere (λ of 405nm) embedded in a polydimethylsiloxane (PDMS) slab manipulated by the probe, (b) through a silica microfiber with a diameter of 12μm (λ of 405nm) in air, and (c) through a 5μm silica sphere (λof 248nm) in air. Superscript numbers denote references.

Most recently, it was theoretically demonstrated8 that the excitation of the electromagnetic modes of coupled metallic particles can facilitate their imaging. The 2D imaging model is illustrated in Figure 3(a), where one of the excited modes (with antisymmetric distribution) is modeled as a current source, as shown in Figure 3(b). The magnified virtual image intensities, at various depth positions, are shown in Figure 3(c). These intensities are significantly lower than for the current source. There is a zero-intensity minimum between the two particles, observable for any separation between the particle centers. This minimum occurs because of destructive interference of the fields that are emitted from various points of the coherent current distribution. Such images do not accurately display the shape of the objects, but they do allow a precise localization of the objects. The interference can therefore affect the quantification of resolution in experiments with nanoplasmonic structures. 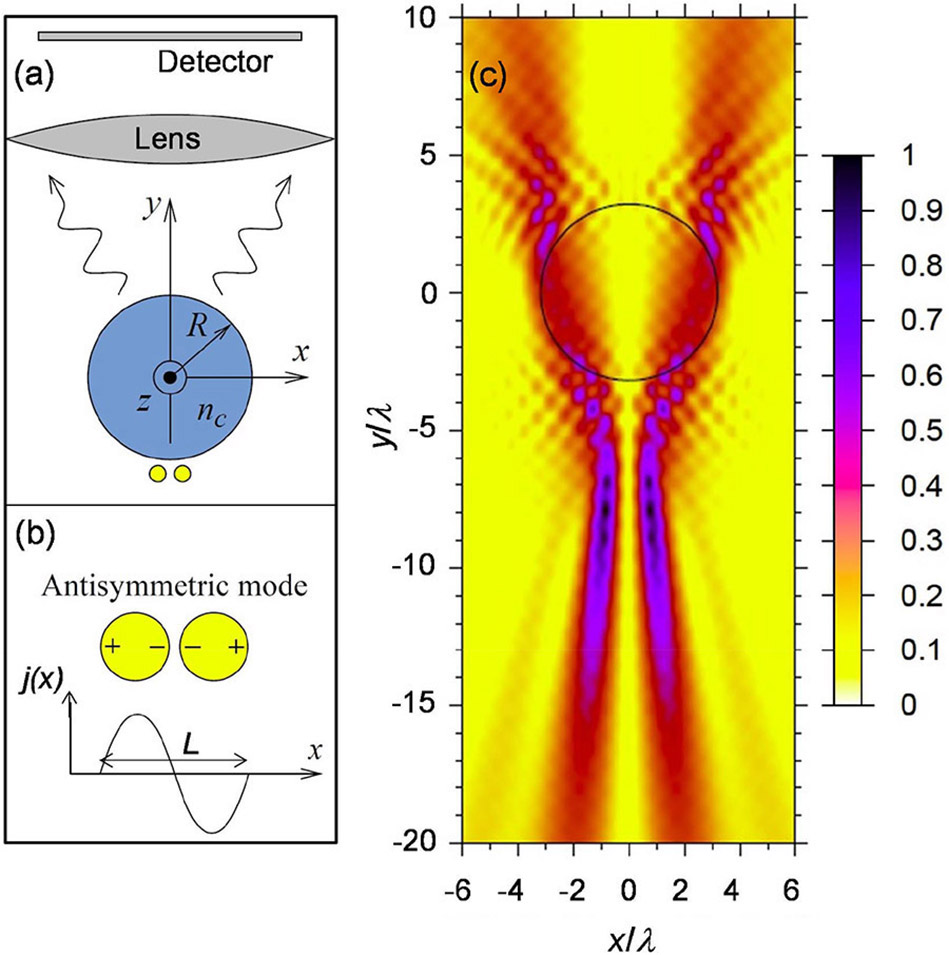 Figure 3. (a) Schematic diagram of the 2D model8for the imaging of two coupled particles. The dielectric cylinder has index (nc) of 1.4 and a radius (R) of 3.2λ. (b) The current source, j(x), represents the antisymmetric mode with length, L. (c) Image intensity calculated as a function of the lateral position, x, and the virtual image depth, y, for L=λ/2.

In summary, we have developed a rigorous analysis of resolution provided by microspheres and microfibers.19, 20 We have synthesized transparent PDMS slabs that contain hundreds of embedded high-refractive-index barium titanate microspheres. Such slabs, or coverslips, can be considered as a novel optical component for super-resolution microscopy that are usable in two different ways. First, without lubrication, they adhere to various surfaces and provide λ/7 resolution. Second, with liquid lubrication, the slabs become non-sticky and can be translated along a surface so that different spheres align with various objects. In future work we will explore the resolution limits of this technology in resonant nanoplasmonic and living subcellular structures. Various technologies and materials will be used for encapsulating high-index microspheres and microfibers. We will also develop commercial applications of these super-resolution technologies through our spin-off company SupriView.24

Work conducted at the University of North Carolina at Charlotte was supported by the US Army Research office, through J. T. Prater (contract W911NF-09-1-0450), by the Center for Metamaterials (National Science Foundation Industry and University Cooperative Research Program 1068050), and by the Air Force Research Laboratory (AFRL/RYD and AFRL/RXC) through the AMMTIAC contract with Alion Science and Technology and the MCF II contract with UES Inc. The work conducted at the Lincoln Laboratory was supported by the Assistant Secretary of Defense for Research and Engineering (Air Force contract FA8721-05-C-002). Opinions, interpretations, conclusions, and recommendations are those of the authors and are not necessarily endorsed by the US government.

Vasily Astratov is a professor in the Department of Physics and Optical Science. In his research group he is developing ‘microspherical photonics,’ which includes the study of super-resolution microscopy, resonant optical manipulation and sorting of microspheres, photonic nanojet focusing, and coupled-cavity sensor applications.

Kenneth Allen obtained his PhD from the University of North Carolina at Charlotte in 2014. He is currently a faculty member at Georgia Tech Research Institute.