A new architecture, based on a single optical parametric oscillator, is used to produce entanglement between qumode optical fields.

Quantum computing has the promise of exponentially faster speeds than classical computing methods for specific, but important, calculations. Such problems include Shor's factoring algorithm (which pertains to data encryption)1 and the simulation of quantum physics.2 Quicker computing for the latter would vastly expand the horizons of quantum physics and quantum chemistry by addressing currently intractable issues (e.g., the potential discovery of room-temperature superconductors, optimization of nitrogen fixation for high-yield fertilizer production, or finding an efficient carbon sequestration process).3 To build a practical quantum computer and achieve such revolutionary objectives, however, the challenges of quantum-bit (‘qubit’) scalability and coherence must be faced. Addressing these challenges has turned the quest for a practical quantum computer into an interdisciplinary endeavor that comprises widely different physical platforms for qubits. Such platforms include trapped ions, optical crystals of atoms, semiconducting quantum dots, superconducting quantum circuits, photonic qubits—and most recently—quantum fields.4

Entanglement (specific quantum correlations) is a crucial property of a quantum processor because the computationally universal set of quantum logic gates must always include an entangling gate. In the circuit model of quantum computing, qubits are initialized independently. The quantum logic gates are subsequently applied to run the algorithm before the result is revealed by measurements on the qubits.5 However, another approach is also possible, in which all the required entanglement is integrated at the start in a generic ‘quantum computing substrate’ (also known as a cluster state).6 A cluster state is defined by a precise entanglement network between qubits, or quantum graph. Once this cluster state has been produced in the laboratory, ‘one-way’ quantum computing7, 8 can then proceed solely via single-qubit measurements of individual qubits—or qumodes (quantum optical fields defined by the resonant modes of a single laser cavity)—and can feedforward to their graph neighbors. These previous studies have all been conducted within the frequency9, 10 and time11 domains and have yielded linear, unidimensional cluster graphs. Universal one-way quantum computing requires a two-dimensional cluster graph, such as a square lattice.7 A scalable version of a square-lattice cluster state, however, has not yet been created in the laboratory (for qubits or qumodes).

In our experimental quantum optics group at the University of Virginia, we have been working as part of a collaboration with the quantum theory group at the Royal Melbourne Institute of Technology, Australia, led by Nicolas Menicucci (formerly at the University of Sydney, Australia). We demonstrated the feasibility and the potential of a new approach to making a quantum computer. In our approach, we replace the qubits with qumodes. Our method is advantageous because the number of qumodes can be extremely large. This is the case, for instance, in hundred–thousand mode, octave-spanning optical frequency combs of carrier-envelope phase-locked classical femtosecond lasers.12, 13

In our approach, we use an optical parametric oscillator (OPO) rather than a laser. The cavity of an OPO contains a second-order nonlinear medium (instead of a one-photon-emitting laser gain medium) in which photons are created in pairs from the annihilation of pump photons. This photon pair emission, into two distinct OPO qumodes, produces entanglement between the qumode optical fields. In our group, we used carefully designed periodically poled potassium titanyl phosphate crystals as well as exquisitely controlled interference between the OPO qumodes of the same frequency and orthogonal polarizations to create prototype quantum processors in the laboratory. These processors have a confirmed—record—size of 60 qumodes entangled over frequency and polarization,9, 10 with an expected size of 3000 entangled qumodes.14 In parallel, work at the University of Tokyo (led by Akira Furusawa)—also in collaboration with the Menicucci group—has demonstrated 104 sequentially entangled qumodes, although these are accessible only two at a time.11

We propose15,16 that a scalable square-lattice cluster state can be generated over qumodes by combining existing quantum optical technologies (i.e., that yielded unidimensional cluster states in the frequency and time domains). Our experimental setup is illustrated in Figure 1. It is based on a principle in which the initial entangled qumode pairs emitted by the OPO are first ‘threaded’ into 1D frequency ‘wires’ (as has previously been demonstrated).10 We then separate these wires (in a somewhat artificial, but nonetheless rigorous, approach by fulfilling the musical score condition) into different temporal bins. These bins are then, in turn, ‘weaved’ into the time-frequency square lattice (depicted in lower left of Figure 1). 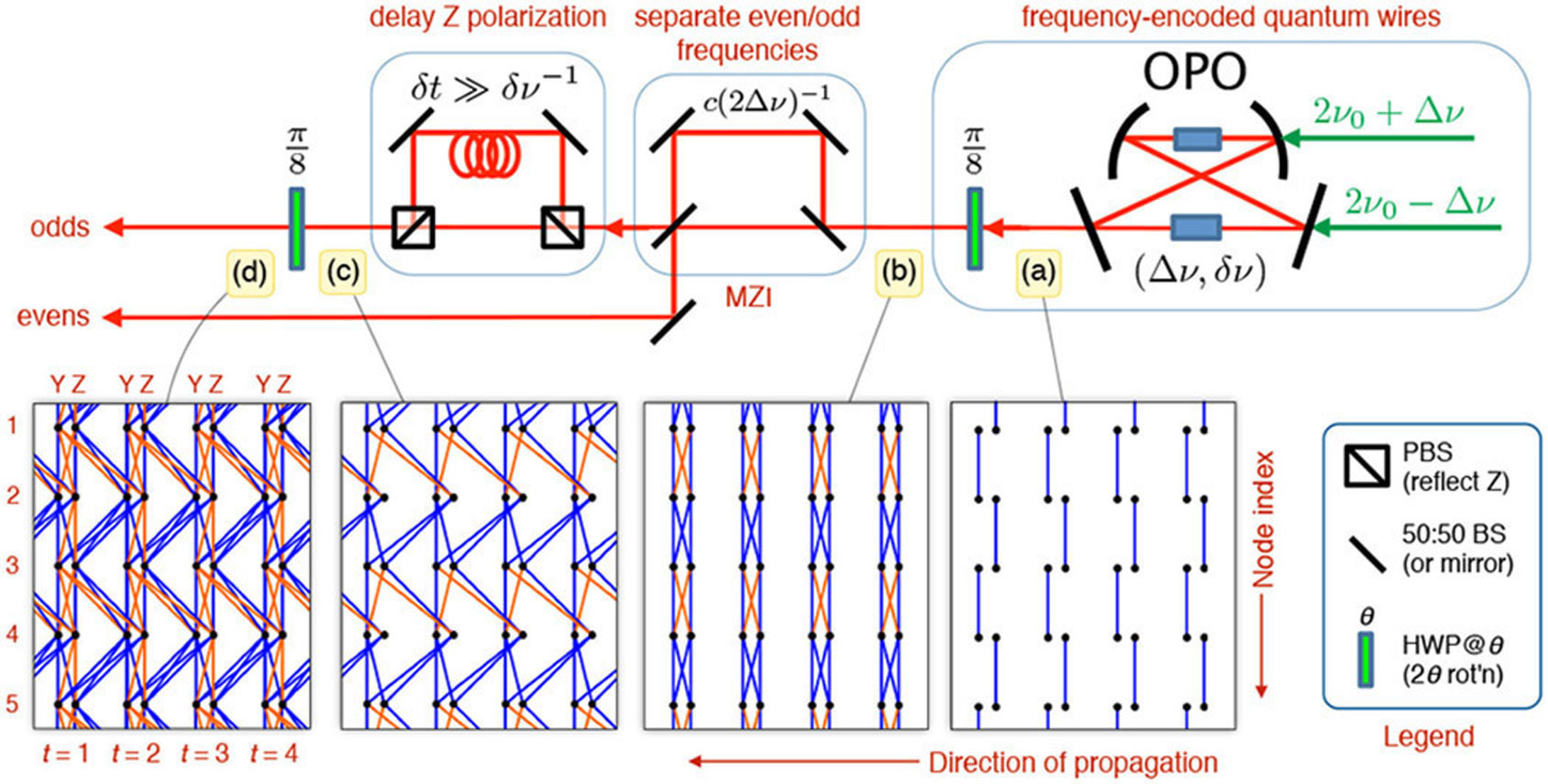 Figure 1. Proposed experimental setup for the generation of a scalable square-lattice cluster state. Light propagates (right to left) from the optical parametric oscillator (OPO) of free spectral range, Δν, and mode linewidth, δν. The OPO has two pumps that are offset symmetrically from the center frequency (2ν0). The principal axes of the OPO's nonlinear crystal are denoted X, Y, and Z (OPO light propagates along the X direction and is polarized along the Y or Z direction). PBS: Polarizing beam splitter. BS: Beam splitter. HWP: Half-wave plate (rotated at angle θ). The time delays between the two arms of each Mach-Zehnder interferometer (MZI) are indicated (cis the speed of light). In particular, the ‘musical score’ condition (δt≫δν- 1) is essential to the definition of the time bins, of duration δt. The obtained entanglement graphs are depicted in (a)–(d), in the lower half of the figure, ranging from initial entanglement pairs (a) to a fully fledged square lattice (d). In these graphs, the frequency labels of the qumodes run vertically and the time bins (t) run in the horizontal direction.

In summary, we demonstrated that our current, record-size, prototype quantum computing processors can be weaved into a hybrid time-frequency square lattice cluster state suitable for universal quantum computing. Until now, these processors have been scalable either in frequency or in time, but not in a universal manner because they are unidimensional. It is important to emphasize that the experimental implementation of our proposed approach merely requires putting together existing time- and frequency-domain technologies. In our future work we will address quantum processing in earnest. We will thus focus individually on measurement of, and feedforward on, all qumodes, and on the implementation of quantum error correction.

Olivier Pfister received his physics BS and PhD from the Université de Nice and the Université Paris-Nord, France in 1987 and 1993, respectively. He was a research associate with John Hall at JILA between 1994 and 1997, and with Daniel Gauthier at Duke University from 1997 until 1999. He is now a professor of physics and an American Physical Society fellow.