A liquid crystal on silicon is used to realize a multiple-input and multiple-output wavelength selective switch that is based on the optical system found in conventional devices.
06 May 2016
Keita Yamaguchi, Kenya Suzuki and Joji Yamaguchi

In reconfigurable optical add/drop multiplexer (ROADM) networks, wavelength selective switches (WSSs)—whose number of input or output ports is limited to one (1 × N)—are widely used to route a specific wavelength channel in a wavelength division multiplexing (WDM) system.1 A multi-degree ROADM node, which comprises splitters and 1 × N WSSs, has previously been proposed.2, 3 In addition, a WSS with multiple input and multiple output ports (M × N) has been suggested.4, 5 The optics of such switches, however, are more complex than those of a 1 × N WSS, and they therefore have an increased size and cost.

To solve this issue, we recently proposed a 5 × 5 WSS with the same optics—except for the port arrangement—as a 1 × N WSS, with the use of holographic phase modulation.6 The optical configuration of such a 3 × 2 switch is based on a liquid crystal on silicon (LCOS). This switch can route multiple input signals by integrating the broadcast-and-select (B&S) function that can connect any input port with any output port.2 In these optics, all the input beams are focused at the same position and are modulated by the same phase pattern on the LCOS. The holographic phase modulation splits the bundle of input beams into multiple diffraction angles (the broadcast function). To connect any input and any output port, one of the beams in each split bundle is connected to an output port. During this switch other beams in the split bundles are not permitted to connect to any output port (the select function). Moreover, the connect state of multiple signals can be switched by changing the phase pattern. As a result, the connection state between an arbitrary input and an arbitrary output can be controlled by integrating the B&S functions by using the holographic pattern and the port configuration. This switch, however, creates a principal loss that is caused by the beam splitting in return for the M × N function. This principal loss can be reduced when the simultaneous switching of multiple input beams is allowed. This simultaneous switching is known as a multi-pole multi-throw (MPMT) function.7 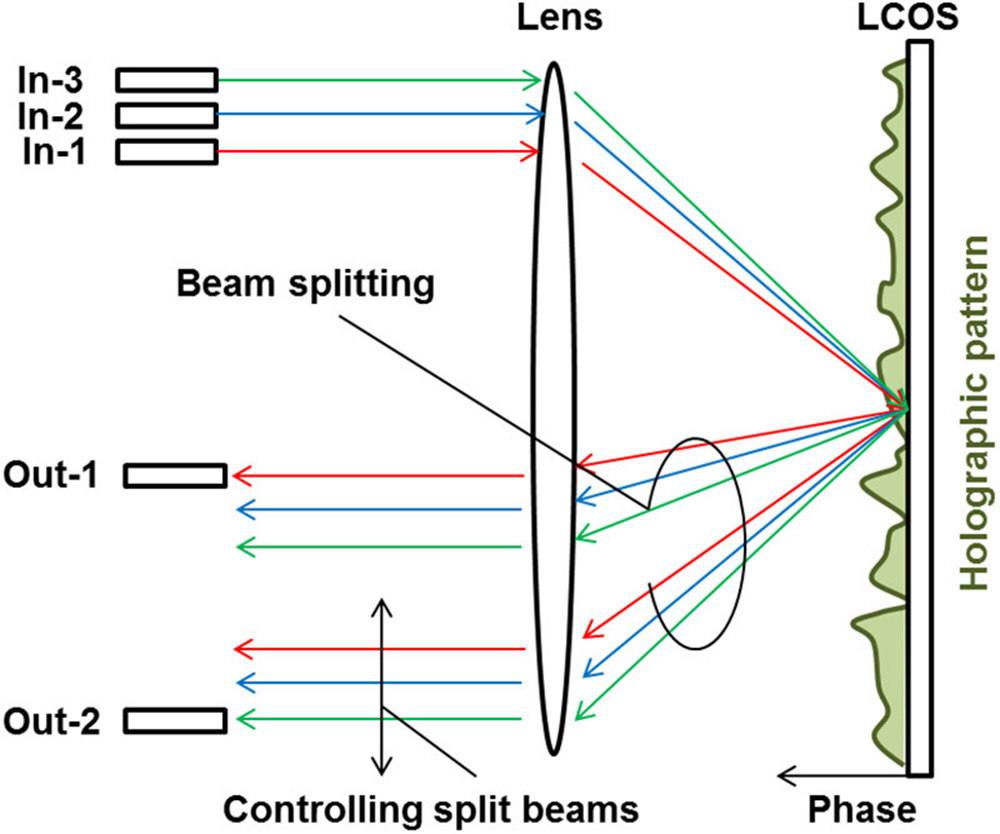 Figure 1. An optical configuration of a broadcast-and-select-type (B&S-type) 3 × 2 (i.e., three input ports and two output ports) switch that is based on a liquid crystal on silicon (LCOS).

The switching function and optical system of a 4 × 4 switch for a two-degree ROADM with the MPMT function, which we developed in earlier work, is shown in Figure 2. In ROADM networks, transmitted and received signals that are connected to the same node have the same wavelength. It is possible to control these signals by using the MPMT function. In our switch, when an in-port is connected to a drop-port, an add-port (connected in the same direction as the in-port) is connected to an out-port automatically.8 In a 4 × 4 switch the MPMT function can also be used to reduce the ramification number from four (as used in a B&S-type 4 × 4 switch) to two. This also results in a reduction of the principal loss from 6 to 3dB.

Figure 2. (a) The switching function and (b) optics of a 4 × 4 switch for a two-degree reconfigurable optical add/drop multiplexer (ROADM) that includes the multi-pole multi-throw (MPMT) function. φrad: Phase.

In our most recent work,9 we demonstrated a new multiple-input and multi-output (M × N) WSS with simple optics. Our 4 × 4 WSS with the MPMT function that is based on a hologram can be used for a two-degree ROADM switch. To design the phase patterns for these devices, we used a computer-generated-hologram (CGH) technique.10

We have also conducted experiments through which we successfully verified the operation of our M × N WSSs. The measured transmittance spectra of our B&S-type 5 × 5 WSS and our 4 × 4 WSS for a two-degree ROADM are shown in Figure 3(a) and (b), respectively. The results in Figure 3(a) were obtained when each channel from the input ports was connected to an output port (corresponding to the connection plan shown in Tables 1 and 2). Our results show that in the 5 × 5 WSS, the increase in the insertion loss (IL), i.e., from the original IL of these optics in the 1 × N WSS, was 7dB (a result of beam splitting). In addition, the maximum loss caused by CGH imperfections was 2.7dB. Conversely, in our 4 × 4 WSS for a two-degree ROADM, we find that the increase in IL was 3dB from beam splitting, and 4.1dB from CGH imperfections. The IL caused by CGH imperfections can thus be improved by optimizing the design of the phase modulation patterns. 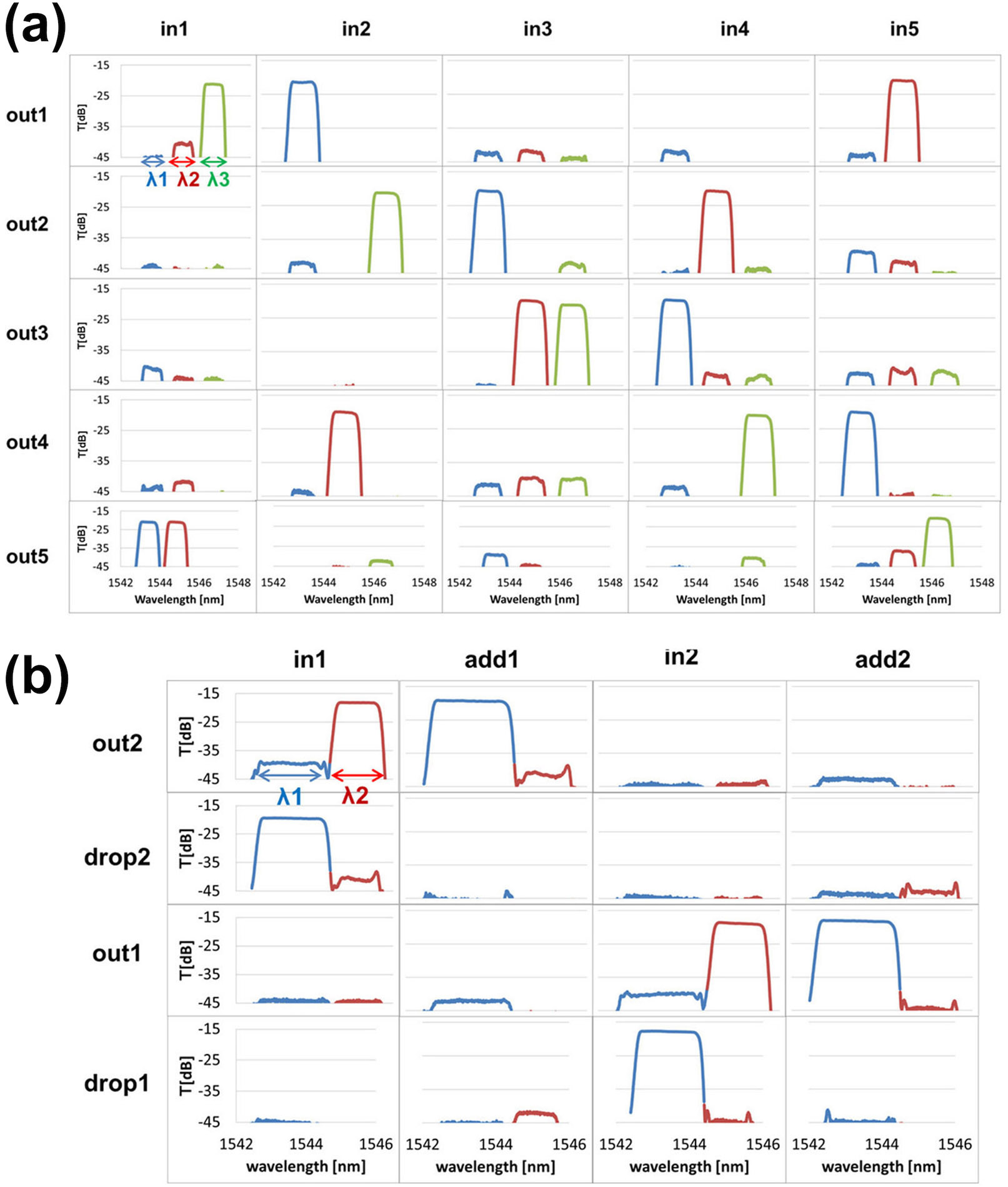 In summary, we have described new designs for M × N WSSs that are based on an LCOS, with the same optics as a conventional 1 × N WSS. In our technique we use a CGH method to create a phase modulation pattern that we can then use in our M × N WSSs to control multiple input signals independently. Moreover, if we allow simultaneous switching of multiple signals, we can use the MPMT function to reduce the principal loss that arises from beam splitting. We have thus demonstrated a 5 × 5 WSS and a 4 × 4 WSS for a two-degree ROADM as examples of the M × N WSSs. In the next stages of our work we will investigate how to improve the characteristics and scalability of our switches. We will also search for new applications of our hologram technique.

Keita Yamaguchi received his BS and MS in physics from Tsukuba University, Japan, in 2009 and 2011, respectively. He now works in the NTT Device Technology Laboratories.