Over the last decade, we have witnessed the pervasive application of plasmonic devices in spectroscopic and sensing techniques due to the enhanced sensitivity that they provide. This trend, which began more than 20 years ago with surface-plasmon-resonance (SPR) sensing and surface-enhanced Raman spectroscopy (SERS) in the visible spectral range, has recently been extended to include the mid-IR region. Absorption spectroscopy in the so-called molecular fingerprint region (8–13μm) enables the specific vibrational resonances of molecules to be directly targeted. Additionally, the use of resonant nanoantennas (the optical counterpart to standard radio-wave antennas) has given birth to surface-enhanced infrared absorption (SEIRA).1–3

However, the pervasive exploitation of plasmonic nanoantennas for mid-IR spectroscopy and integrated sensing can only be envisaged if novel CMOS-compatible plasmonic materials are developed. In this framework, heavily doped group-IV semiconductors represent the ideal platform for the development of integrated mid-IR plasmonic devices.4 Although standard semiconductors are known to be poor conductors, heavy doping can enable the fabrication of materials that behave as good electrical conductors in the IR spectral range.

We recently demonstrated that nanoantennas made of heavily doped germanium epitaxially grown on silicon can locally enhance IR spectroscopic signatures by up to two orders of magnitude.5

The antennas are grown and fabricated using techniques that are fully compatible with standard silicon foundry technologies (i.e., chemical vapor deposition, electron beam lithography, and reactive ion etching). A prototype, shown in Figure 1(a) and (b), relies on two germanium rods separated by a small gap. This setup resembles the two-wire dipole antennas that are used as transmitters and receivers for radio-wave frequencies. The length of each element is set to be resonant with a specific mid-IR wavelength, and the presence of the gap boosts the localization and enhancement of the field intensity: see Figure 1(c). 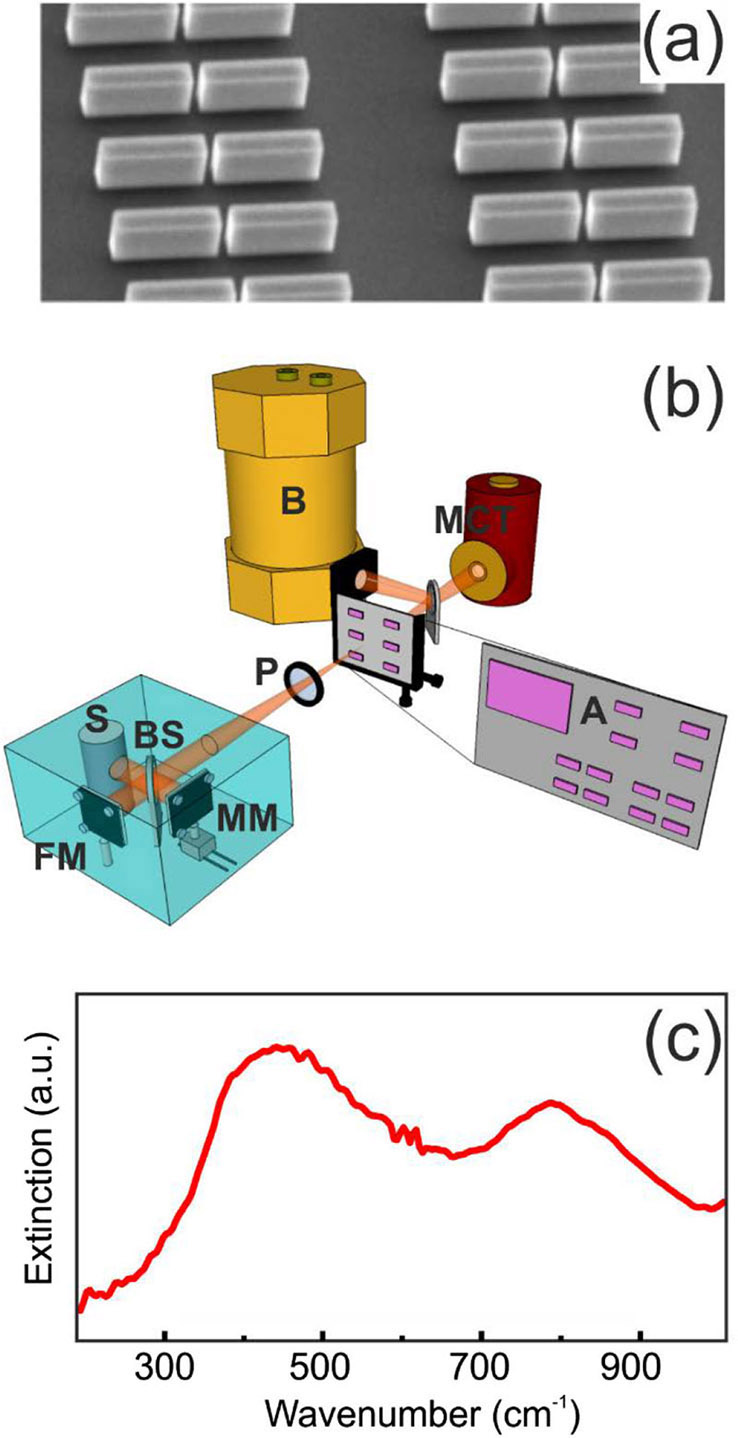 We exploited an array of these antennas to achieve enhanced sensing of substances in both the solid and liquid phases, with particular focus on a liquid explosives simulant (chloroethyl methyl sulfide). The enhancement factors that we achieved do not yet compete with state-of-the-art gold nanoantennas, since the latter often achieve an enhancement of more than three orders of magnitude.2,3 However, the proposed group-IV-material approach trades the performance of individual antennas for the possibility of building large sensing arrays that are easily integrated with standard CMOS sensing platforms.

In addition to their CMOS compatibility and ability to be integrated with electronic circuits, semiconductors feature a higher material quality compared with metals. This is because single crystals can be epitaxially grown. Semiconductors are therefore favored for use in state-of-the-art nanofabrication techniques for the design of low-loss devices. The response of semiconductors can also be tuned via modulation of the doping level, which is a feature that has no analog in metals. The design of plasmonic properties can be achieved not only by altering the growth conditions, but also by applying a tunable gate bias, or by inducing a high density of free carriers via optical excitation with a pulsed laser. The latter approach opens the door to ultrafast, all-optical control of mid-IR plasmonic devices that operate at the picosecond timescale. We recently demonstrated that ultrashort near-IR pulses can be exploited to excite transient plasmonic behavior at selected wavelengths from 10 to 15μm in the mid-IR region.6, 7

We have developed a mid-IR plasmonic platform based on an array of heavily doped germanium nanoantennas. Beyond biochemical sensing, semiconductor plasmonics has the potential to impact a variety of technological fields in which IR radiation is exploited, including photovoltaics, energy harvesting, thermal imaging, and night vision. Current efforts are being devoted to increasing the doping level, with the aim of broadening the available spectral window and covering the 3–5μm range that is relevant for applications such as protein analysis and common gas spectroscopy. Moreover, a key ingredient for the development of group-IV mid-IR plasmonics is the monolithic integration of germanium nanoantennas and IR detectors based on germanium, silicon-germanium (SiGe) alloys, and multiple SiGe quantum wells on the same silicon chip. Our ongoing research also focuses on the application of germanium-based plasmonic devices for the development of novel DNA-sensing platforms.

The research leading to these results received funding from the European Union's Seventh Framework Programme under grant agreement 613055.

Paolo Biagioni is an associate professor. His research interests include plasmonics, nano-optics, and surface-enhanced spectroscopies.

Daniele Brida is an Emmy Noether group leader and Zukunftskolleg Fellow. His research targets the development of advanced optical technologies and their use in the investigation of ultrafast phenomena in condensed matter.

Michele Ortolani is an assistant professor in the mid-IR spectroscopy group. His research activity ranges from the observation of quantum effects in confined electron systems by IR spectroscopy to IR nanoimaging and nanospectroscopy using near-field techniques in the IR region.