Tight control in the fabrication process of light-emitting nanofibers

A firm control over parameters affecting the electrospinning fabrication method enables better production of nanofilaments and devices based on them.
04 February 2016
Luana Persano, Andrea Camposeo and Dario Pisignano

In the past few years, the production of nanostructured organic materials in the form of fibers has seen significant advances. Progress in processing, functionalization, and assembly technologies has allowed polymer nanofibers to attract growing scientific and industrial interest in fields such as sensors and bio-sensors, actuators, energy harvesting, smart clothing, nanophotonics, and nanoelectronics.1 One of the developed fabrication and synthesis methods is electrostatic spinning or electrospinning, which is characterized by operational simplicity, reasonable throughput, and large-area fabrication capability. In this process, intense applied electrified fields produce solution jets, and polymer filaments can then be collected in good amount and embedded in various device platforms: see Figure 1(a). 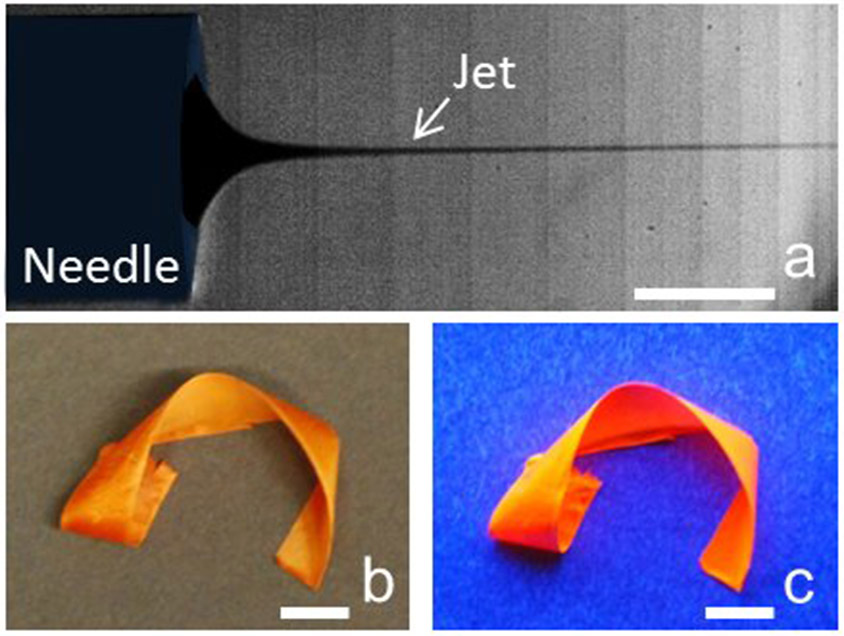 Figure 1. (a) Optical micrograph of a typical electrified viscoelastic jet at the exit of a needle during an electrospinning process. Scale bar: 200μm. The bottom panels show photographs of a free-standing array of light-emitting fibers under (b) ambient illumination and (c) UV excitation. Scale bar: 1cm.

However, the nanofabrication process of light-emitting fibers often remains largely suboptimal, mostly due to the many different parameters the resulting morphology and the functional properties of the produced nanostructures depend on. During fiber production, scientists can only directly manage a few of these parameters, such as the concentration of the polymer solution, the applied flow, and the electric field. Other parameters are related to intrinsic material properties or to poorly managed ambient conditions. These variables are typically hard to control, but they can critically affect the process results and often introduce significant reproducibility issues in electrospun samples. These aspects are particularly relevant for applications in photonics, which are based on optically active materials, such as fluorescent chromophores and conjugated polymers. For instance, the presence of oxygen and moisture in the processing environment can severely affect the optical properties of these compounds and of the nanostructures built from them. Since nanophotonics and optics involve the management of light at the sub-micron scale, producing very smooth surfaces is especially important to ensure effective light transport and reduce photon scattering.

To overcome some of these issues, we recently developed an electrospinning fabrication process under a controlled nitrogen atmosphere with oxygen content below two parts per million.2 This variant allows researchers to increase the overall reproducibility, to improve the surface morphology of the produced nanofibers, and to enhance some optical properties. In particular, we have found that low levels of ambient humidity lead to reduced surface roughness of individual light-emitting fibers. In addition, we have demonstrated that electrospun fibers made of a plastic matrix doped with organic laser dyes feature optical gain and low propagation losses for self-emitted photons. This makes them effective active materials for lasers and optical amplifiers.3–5 We can achieve single or multi-mode laser emission by exploiting microcavity effects, either at the scale of single fibers or in mats made of many light-emitting filaments: see Figure 1(b) and (c). Hence, these polymers can be used to amplify light in all-optical short-distance data transmission. Due to the chemical versatility of electrospinning technologies, and to the commercial availability of many dyes suitable for polymer doping, electrospun nanofibers have already seen application in optical amplifiers and tiny lasers with operation ranging from UV to near-IR wavelengths.

We anticipate the combination of lower surface roughness and enhanced emission quantum yield due to a reduced incorporation of oxygen and moisture during electrospinning to further strengthen optical amplification and lasing applications. Decreasing optical losses when light propagates along the longitudinal axis of individual nanowires and increasing the number of emitted photons available for light amplification might reduce the pump threshold needed for achieving lasing.

Furthermore, by finely tailoring the morphology of fibers we can control the wetting behavior of optically active mats, eventually minimizing their interaction with ambient humidity and improving the material stability.5Finally, these fibers are generally flexible and can conform to surfaces of all shapes. A tight control over their fabrication parameters, including secondary parameters during electrospinning, could result in a new class of light-emitting and lasing nanofibers with enhanced functional properties. Potential application fields include smart wearable devices, point-of-care diagnostics, and home automation.

In summary, our approach could enable the development of new, interesting photonic materials. Future work in this direction includes extending the variety of processed materials to realize new classes of light-emitting and nanocomposite fibers, and investigating the fundamental light-transport properties of samples made of multiple filaments.

The research leading to the most recent of these results has received funding from the European Research Council (ERC) under the European Union's Seventh Framework Programme through ERC grant agreement 306357 (ERC Starting Grant NANO-JETS).

Luana Persano is a researcher working on nanofabrication, piezoelectric polymer nanofibers, soft lithography, nanocomposites, and organic-based lasers. She has received the CNR Start Cup Award and the Bellisario Prize for a Young Talent in Industrial Engineering for her work on electrospinning technology transfer.

Andrea Camposeo is a staff researcher working on the development of light-emitting polymer nanofibers for photonics and organic-based laser devices. His interests also include characterization of the emission and gain properties of polymers, composites and organic crystals, and two-photon lithography.

Dario Pisignano is an associate professor of experimental physics, the coordinator of ECMT, and the principal investigator of the NANO-JETS ERC Starting Grant Project. His research interests include polymer nanofibers, photonic devices based on organic materials, microfluidics, and nanobiotechnology.