Pulsed laser exposure (involving very short pulses of 30–50ns) greatly reduces the chances that environmental vibration will destroy your hologram. However, pulsed lasers with sufficient energy can emit only certain wavelengths in single longitudinal mode (SLM). Until now there has been no SLM laser capable of emitting more than several millijoules per pulse in red and blue light. Therefore, we planned to investigate the possibility of recording good-quality Denisyuk holograms (those visible under white light and commonly seen on holographic displays) with a sequence of laser pulses.

We know that one pulse of a pulsed laser can record a small hologram (as with our digital holographic printers1). Therefore, it seems logical to assume that a sequence of these pulses may record a larger hologram. Furthermore, the objects to be recorded and all the optical elements used generally must remain very stable and be totally still between the exposures performed by the different pulses.

In our experiments, we used a commercial RGB-ALPHA laser, which has two master oscillator channels, and a neodymium-doped yttrium aluminum garnet (Nd:YAG) crystal as an active medium. We obtained the 532nm (green) laser emission by down-converting a 1064nm transition of Nd:YAG, and 660nm (red) laser emission by down-converting a 1319nm transition. The 440nm (blue) laser emission is achieved by mixing some fraction of the 1319nm radiation with its 660nm harmonic. The laser is a flash-lamp pumped system with a repetition rate of 30Hz (see Figure 1). The laser wavelengths fit well into a chromaticity diagram (which defines physical colors in terms of their wavelength: see Figure 2).2 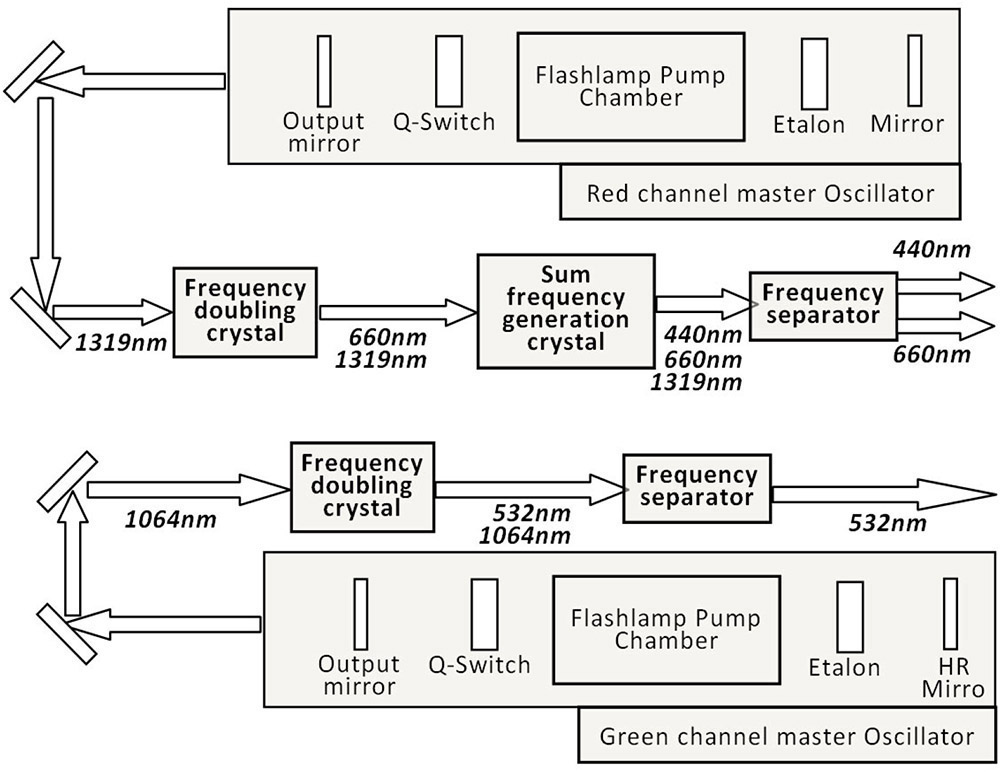 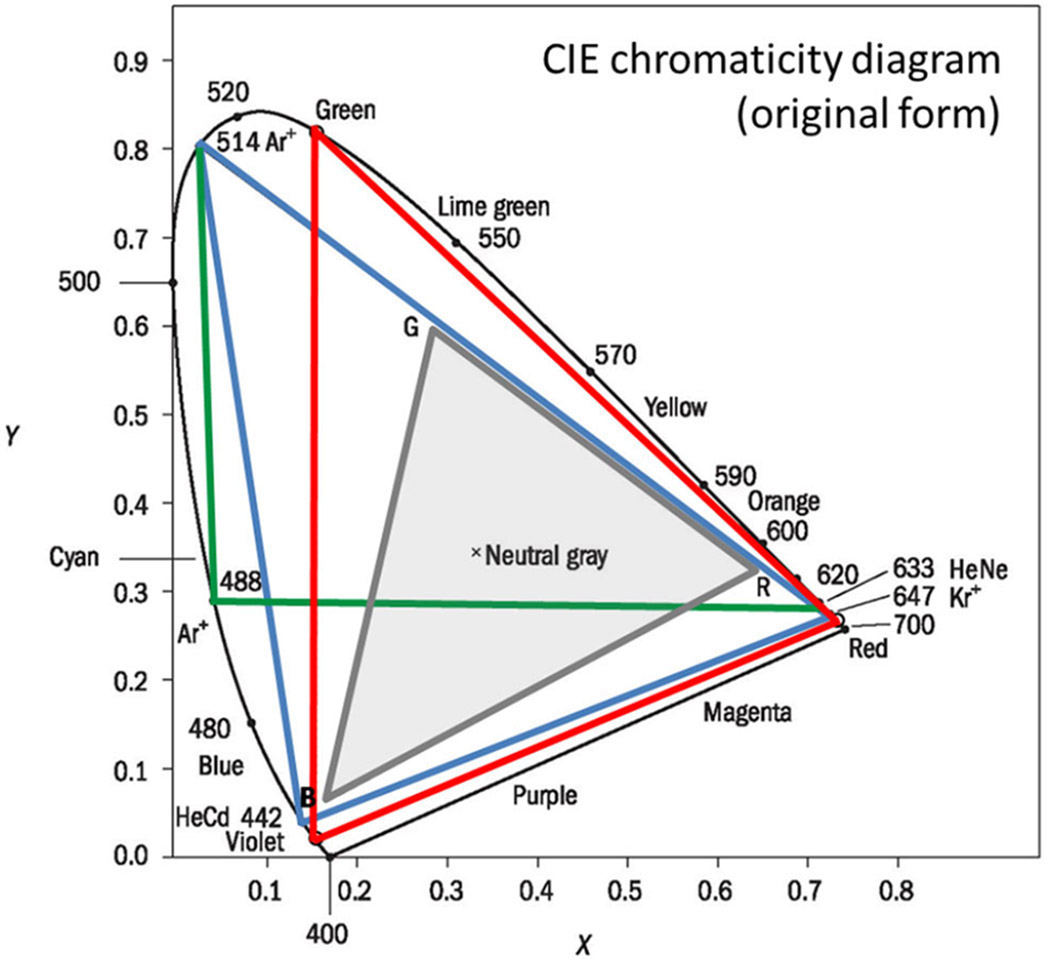 Figure 2. CIE chromaticity diagram showing the laser colors (wavelengths) achieved. The blue triangle shows a range of colors produced using gas lasers: krypton (Kr+) at 647nm, argon (Ar+) at 514nm, and helium-cadmium (HeCd) at 442nm. The green line shows the possible range using the Ar+line at 488nm instead. The red triangle represents the range of colors covered by the RGB multi-pulse laser wavelengths of 440, 532, and 660nm. The gray triangle indicates a typical RGB color television cathode ray tube display. Neutral gray is at a point corresponding to 0.33R, 0.33G, and 0.33B. The numbers around the curve are wavelengths in nanometers, and approximate hues are indicated at various points. CIE: International Commission on Illumination.

As a photosensitive medium, we used Slavich PFG-03C silver halide photoemulsion3 deposited on 102×127mm glass plates. For the exposed photoplate processing we used formulas developed by Hans Bjelkhagen and Nick Phillips,4 and adjusted by us to pulsed exposure. We combined 440, 532, and 660nm laser radiation pulses into one white laser beam using three dielectric mirrors as a beam combiner (see Figure 3). 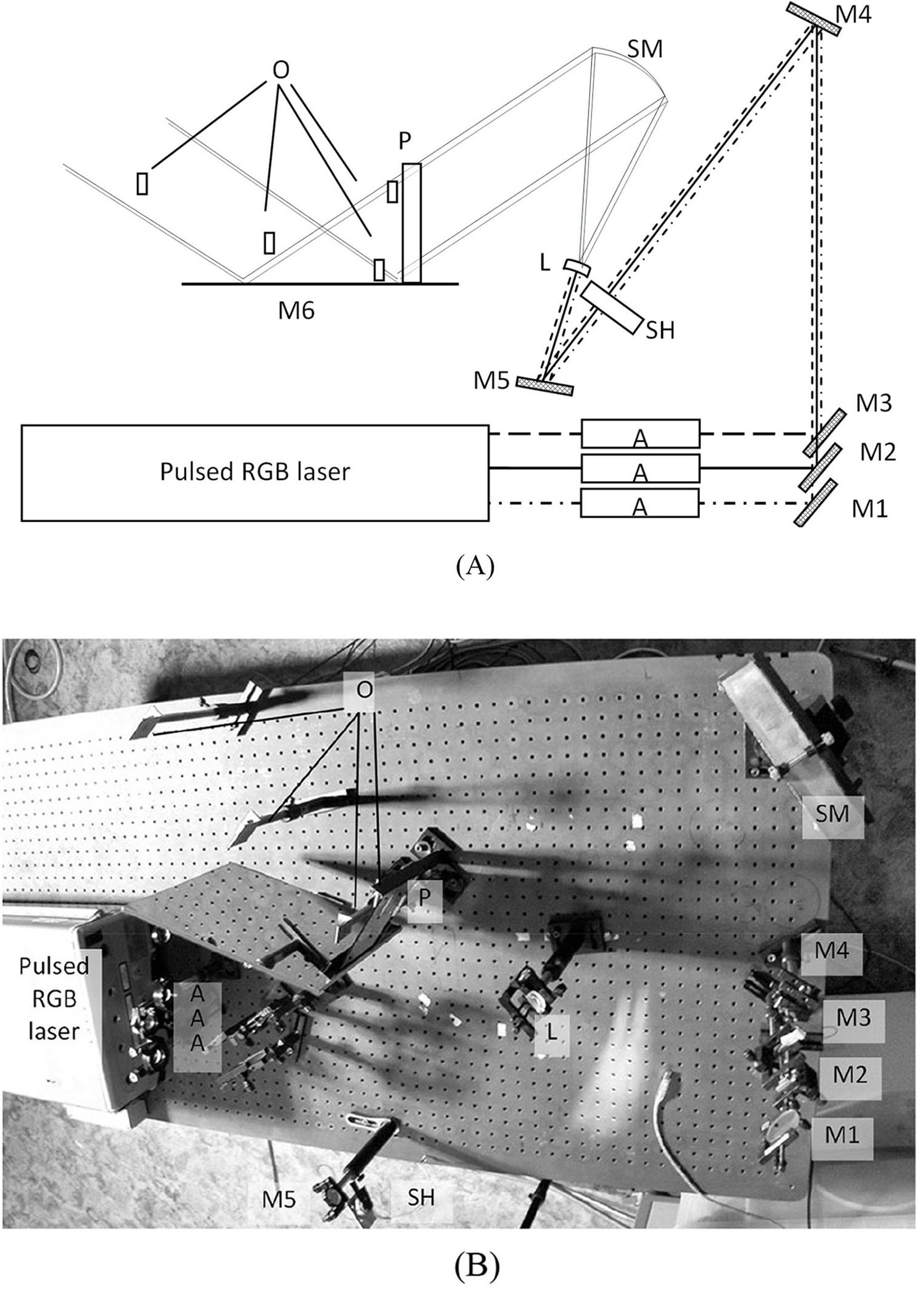 We performed the exposure using a computer-controlled shutter. As objects, we used brushed aluminum plates mounted on laboratory poles on a 200×80×20cm honeycomb table, which had no active system for vibration isolation. The shortest distance of the photoplates from the table was 17cm, and the height of the objects' centers was 22–25cm. We undertook the experiments during the daytime in a laboratory on the second floor of a building facing a crowded city street.

As a photoplate holder we used an ordinary photo frame with the top part removed, and mounted this on on the standard pole. We placed four numbered objects at distances of 1.5, 3, 21, and 40cm from the plate, respectively. The fifth object—an aluminum plate—was situated between the second and third objects.

We recorded dozens of 102×127mm holograms. Figure 4 shows a photograph of one, in which even the object situated 40cm from the photoplate surface is highly visible. 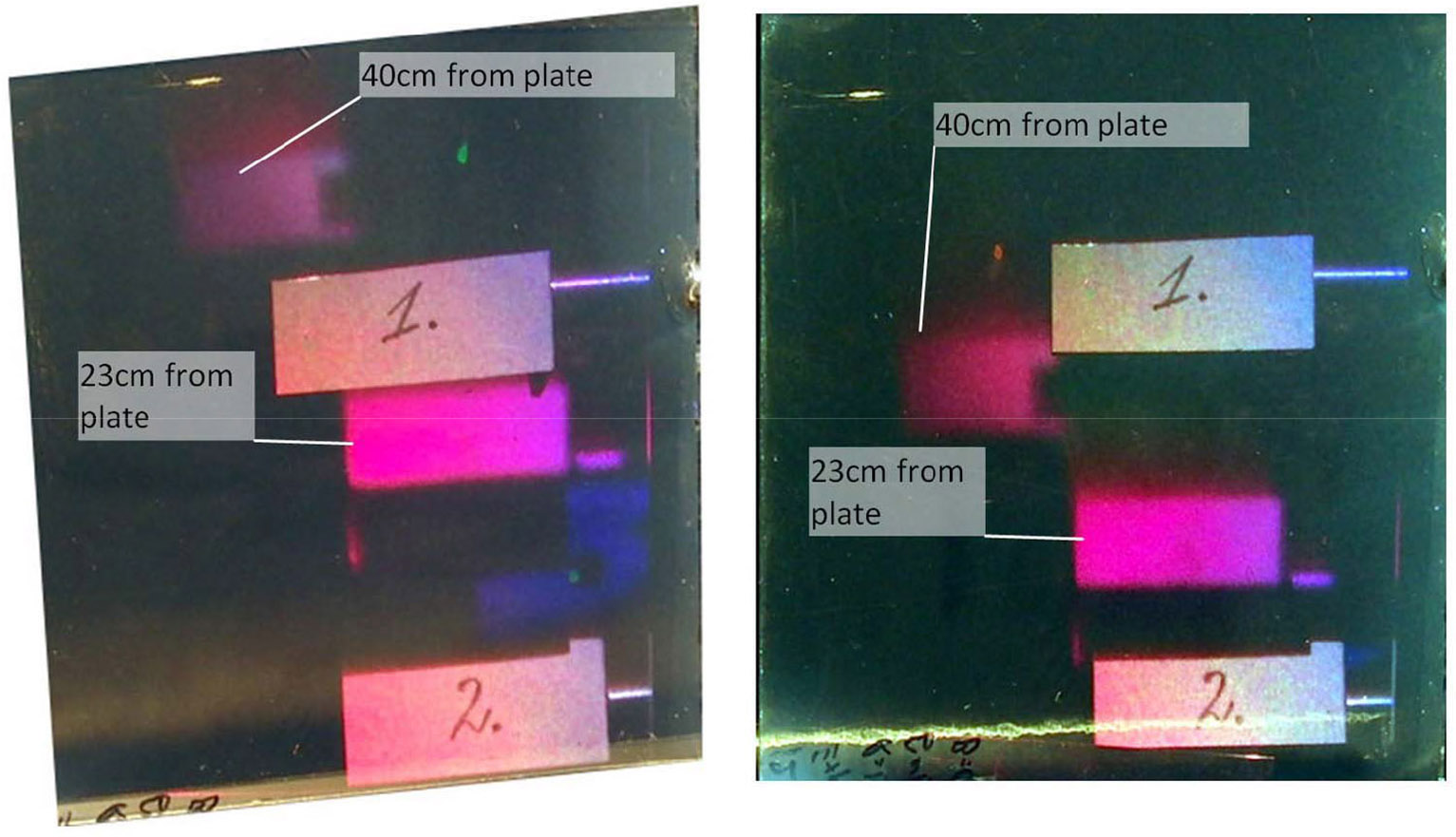 Figure 4. Photograph of different views of the Denisyuk hologram recorded with a series of 120 pulses from the pulsed RGB laser.

We believe that the setup's insensitivity to vibration when exposing the photomaterial to a sequence of laser pulses is due to the silver halide photomaterial penetrating through the very high and instantaneous material exposure. In this scenario, each laser pulse—even the weaker one—rapidly forms reliable latent images. As a result, the reciprocity law differs from continuous wave exposures of any holographic material tested in our laboratory (the Schwarzschild effect), including photopolymers. Naturally, each laser's energy pulse must have the same wavelength and same phase needed for photomaterial exposure, and this is the case—at least for a few seconds—with the RGB-ALPHA laser used in our experiments.

Table 1 lists the exposure energies required to produce the best-perceived holograms under white light. We achieved those energy levels by exposing the plate for four seconds. In other words, we successfully recorded a Denisyuk hologram using a sequence of 120 pulses.

Table 1.Total energy exposure values for the best-perceived hologram under white light (illuminated by an Osram Decostar 51 Titan SP, 12V, 50W halogen bulb). The energy required may differ slightly according to the characteristics of a particular plate batch.

In summary, we have recorded a true-color Denisyuk hologram with a sequence of laser energy pulses 33ms apart, each of which produced peak radiation energy densities of 3.17, 4.76, and 1.25W/cm2 for red, green, and blue, respectively. The recorded color hologram size was 127 × 127mm, and the image depth was up to 40cm. The resulting hologram showed no image blur, vibrational interference rings, or any other visible artifacts.

Photomaterial exposure with a sequence of laser energy pulses has several advantages over continuous-wave exposure in creating good-quality color holograms, most notably the very high and instantaneous material exposure. It is therefore possible to use RGB-ALPHA pulsed holography lasers not only in digital holography but also in classic analog color holography, for recording true-color deep Denisyuk holograms with multi-pulse exposures.

We have used this multi-exposure principle in our holographic contact copier manufactured in 2014. The device performs a slit exposure of silver halide and photopolymer photomaterials according to our patented recording scheme.5 Next, we are developing diode-pumped solid-state lasers to have more frequent pulses, thus enabling coverage of a larger exposure area while keeping the total exposure time in the range of several seconds.

Stanislovas Zacharovas earned a PhD from Vilnius Pedagogical Institute in 1989, and worked in the satellite and cable industry before joining Geola in 1998. He is now CEO, and is co-author of Practical Holography (Fourth Edition).