Using a superfluid to image its own vortices

The singly quantized vortices in superfluids can provide an ‘atomic theory’ of turbulence (for which there is no general theory), enabling a ‘video camera’ operating at ∼100 microkelvin to image vortices.

Turbulence (chaotic fluid flow) affects almost all areas of human endeavor, yet it has no general ‘theory,’ the governing equations being solvable only in very simple circumstances. In a superfluid, which has zero viscosity, turbulence is simpler, consisting of a collection of identical elementary vortices. These are quantized—the circulating flow can only take one value—so that we may think of them as providing an ‘atomic theory’ of turbulence that may yield insight into the intractable classical phenomenon. Liquid 3He (the light isotope of helium), forming a superfluid at millikelvin temperatures, allows us to image this ‘quantum turbulence.’ The superfluid component of the liquid is made up of pairs of 3He atoms acting as weakly coupled molecules. By moving a mechanical oscillator fast enough to break these pairs, we can create a beam of unpaired atoms. This is our ‘illumination.’ We can also detect the beam by its damping effect on a further mechanical oscillator. Thus, we have both a generator and a detector to make up the elements of a spectrometer.1 The unpaired atoms are strongly reflected by the flow around a vortex, and therefore create ‘shadows’ in the beam. This forms the basis of our imaging system.

To generate and detect the atomic beam, we used a device comprising either a vibrating wire or quartz tuning fork, which we set into motion electrically to serve as a mechanical oscillator. When oscillated fast enough, the device breaks the superfluid atomic pairs to provide a beam of atoms along the direction of motion (the mean free paths of these atoms can be hundreds of meters long.) We detect the beam by its damping effect on a second oscillator. Thus, if we are aiming to use the atomic beam as illumination, we have the basic tools of a generator and a detector. Furthermore, by placing a generator resonator in a box with a small orifice connecting the superfluid in the box with the bulk superfluid outside, we create the atom-beam equivalent of the classical black-body radiator. By breaking the pairs in the box, we create a thermal beam of atoms streaming out of the orifice. Furthermore, if we dissipate energy inside the box (for example, by irradiation with neutrons), the black-body radiator acts as a scintillation counter, where the 3He atoms have energies 107 times lower than visible light photons. In this mode, a superfluid 3He black-body radiator can detect energies of a few hundred eV.

There are some interesting peculiarities of these beams. The atoms have a Bardeen-Cooper-Schrieffer dispersion curve—as do the unpaired electrons in superconductors. Therefore, they can be scattered through Andreev processes by any flow fields on which they impinge. However, unlike ordinary scattering, an Andreev process sends the atom back precisely along its incoming trajectory. Starting with a black-body radiator emitting a beam of unpaired atoms, if we then generate some vorticity in the path of the beam, a fraction of the atoms will be Andreev-reflected and will return accurately through the orifice back into the black-body container, raising its temperature. Thus we can detect the Andreev reflection fraction just from the temperature rise in the box.2

Based on the properties outlined here, we have produced a video camera to detect vorticity (see Figures 1 and 2). The system comprises a black-body radiator that emits the illuminating beam, and the ‘video’ detector, which is a square array of 5×5 mini black-body radiators to detect the beam.3 If we inject some turbulence in the space between the two, the vortices will reflect part of the beam, throwing shadows on the detector. In principle we can then image the evolution of the vorticity in real time as a moving 25-pixel image. 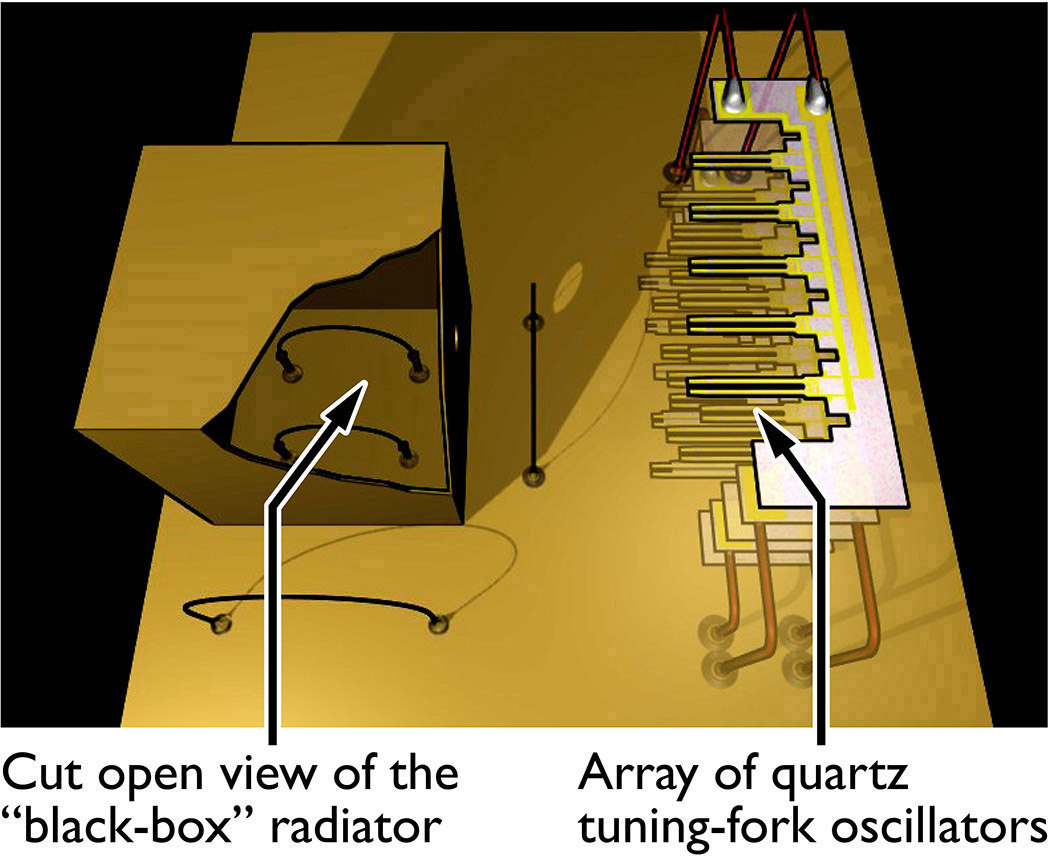 Figure 1. The arrangement of a ‘video camera’ to detect vorticity. On the left is the black-body radiator box with its orifice, cut open to show the vibrating wire resonators inside. On the right is the array of quartz tuning-fork resonators forming part of the detector array. The top row is shown fully, and the lower rows are muted for clarity. The rows are placed inside copper boxes to create the full detector array (see Figure 2). 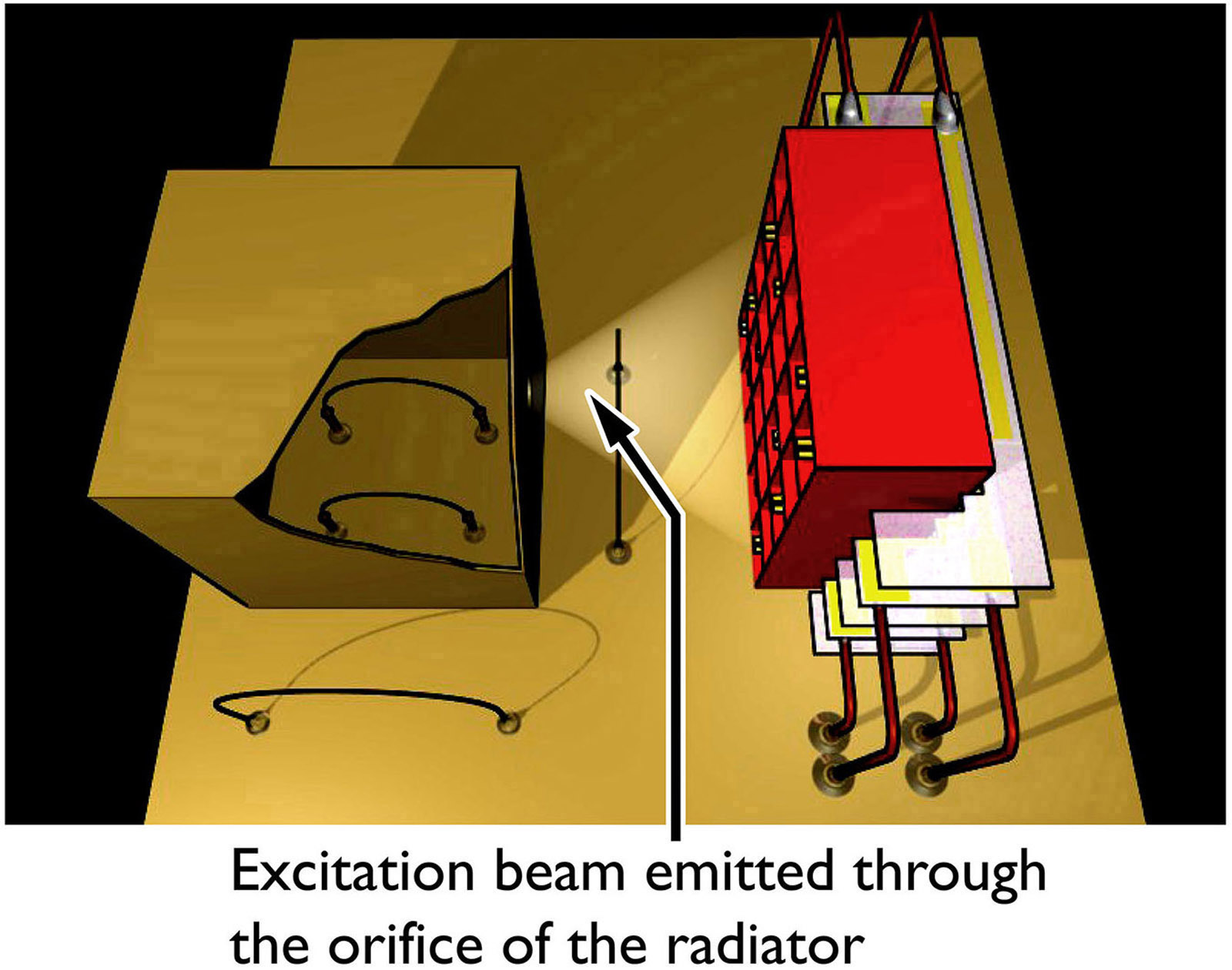 Figure 2. The arrangement of Figure 1 is repeated but with the detector tuning forks now sitting inside their individual boxes. To give an idea of the scale, the individual pixels in the array are spaced approximately 1mm apart. Also indicated is the thermal beam (emitted by the black-body radiator on the left), which impinges on the detector.

At present, we can extract a video view of the beam as it strikes the detector array. Interpreting what we see is not so easy. However, this proof-of-concept setup demonstrates that the idea is viable. We can indeed see the evolution of a vortex tangle, which is the main aim of the project. As yet, the small detectors in the array are not sensitive enough to provide single-vortex resolution. Nevertheless, in fundamental terms we have already seen a lot even at our current resolution. Without the black-body beam source, a vibrating-wire resonator placed in front of the detector array can break pairs in the condensate to yield a beam of quasiparticle excitations (unpaired atoms and holes), which we can image with the detector. We believe that this is the first direct imaging of a pair-breaking process in a Bardeen-Cooper-Shrieffer system. The image gives us information on the angular range of the broken pairs as a function of the velocity of the pair-breaking scatterer. This is a very intimate view into the guts of a quantum disintegration process.

In future, to image individual vortices (to follow the evolution of a vortex tangle) we need to improve the resolution of the detector, which we know how to do. Twenty-five pixels may seem modest, but the system is working at around 100 microkelvin (about a million times colder than room temperature), and the first optical detector arrays—now ubiquitous in all our devices—had even fewer pixels than this.

We would like to acknowledge the support of the UK Engineering and Physical Sciences Research Council and the EU Framework 7 MICROKELVIN consortium.

George Pickett was educated at Oxford and spent several years as a postdoctoral researcher in Scandinavia. He then moved to Lancaster where he established the Lancaster Microkelvin Laboratory. He is a Fellow of the Royal Society, and an Academician of the Russian Academy of Sciences.

Ian Bradley is a reader in physics.

Tony Guénault is a professor of physics.

Rich Haley is a reader in physics.

Viktor Tsepelin is a reader in physics.