Hydrogen peroxide (H2O2) is a strong oxidizing agent that is associated with the generation of hydroxyl radicals in the atmosphere. It is also involved in several environmental processes, including the degradation of pollutants in water by advanced oxidation processes.1, 2 In addition, H2O2 is relevant in the medical field as a reactive oxygen species used as a biomarker of lung and airway-related inflammation. Mid-IR laser-based sensor systems, with minimum detection limits (MDLs) at the parts-per-billion (ppb) level, have previously been reported for monitoring of H2O2.3–5 Although these configurations have high sensitivity levels and continuous real-time detection capabilities, they are subject to interference from water lines in the selected spectral regions, which is a potentially significant concern for their field operation.3 For future development of mid-IR laser-based sensor systems, it is therefore necessary to explore alternative strong, interference-free H2O2 absorption lines.

The strong oxidation potential of H2O2, its relatively broad germicidal spectrum, and the innocuous character of its decomposition products (water and oxygen) have led to the extensive use of this species for decontamination and sterilization of clean production sites and healthcare facilities.6–8 Vapor phase hydrogen peroxide (VPHP) units—in which aqueous H2O2 solutions are used to generate gas-phase H2O2 concentrations of 200–1200ppm—are normally used in H2O2-based sterilization/decontamination techniques. Other applications of H2O2 include its use as a bleaching agent in the production of pulp and paper, and for sterilization of packing materials and medical devices. Potentially high levels of H2O2 can be observed at production and decontamination sites, and therefore monitoring the concentration of this species is crucial for evaluating exposure risks (e.g., above the US Occupational Safety and Health Administration Agency's average permissible exposure levels). 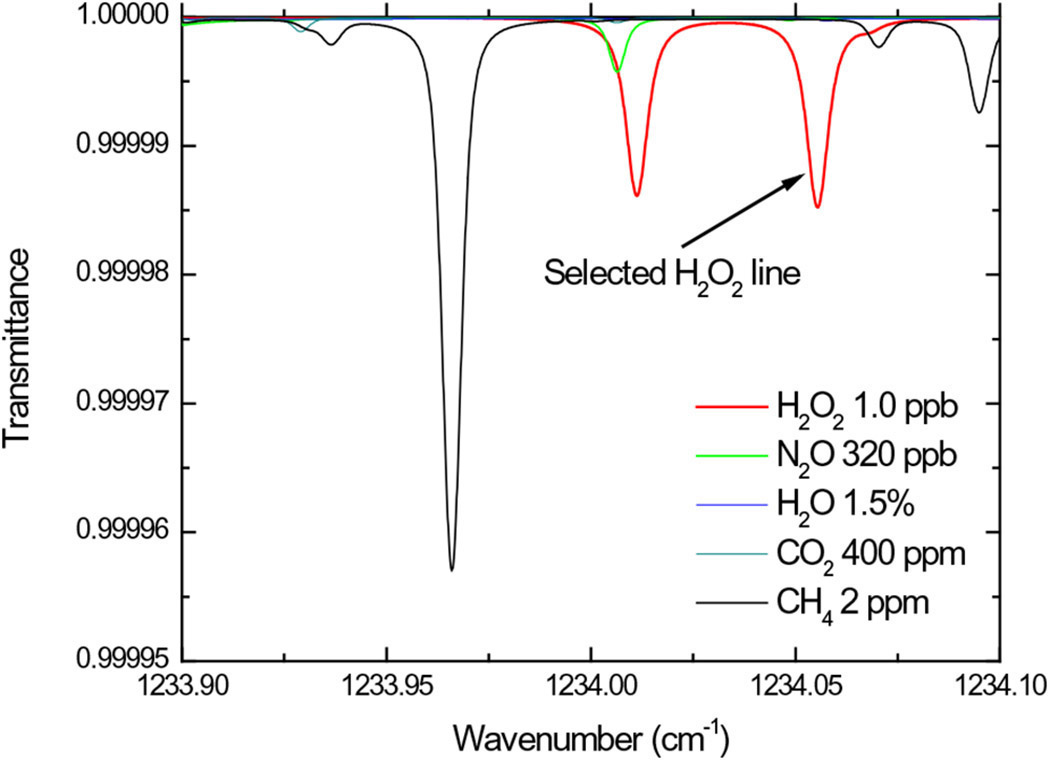 In our sensor system we use a continuous-wave external-cavity quantum cascade laser (CW EC-QCL) that has a mode-hop-free (MHF) tuning range of 1225–1285cm−1. We couple this EC-QCL with a commercial multipass absorption cell that has an optical path length of 76m. We use wavelength modulation spectroscopy, with second harmonic detection, for data processing. The modulation amplitude and pressure levels in our sensor system have been optimized for sensitive detection of H2O2. The actual configuration of our developed sensor system is shown in Figure 2. 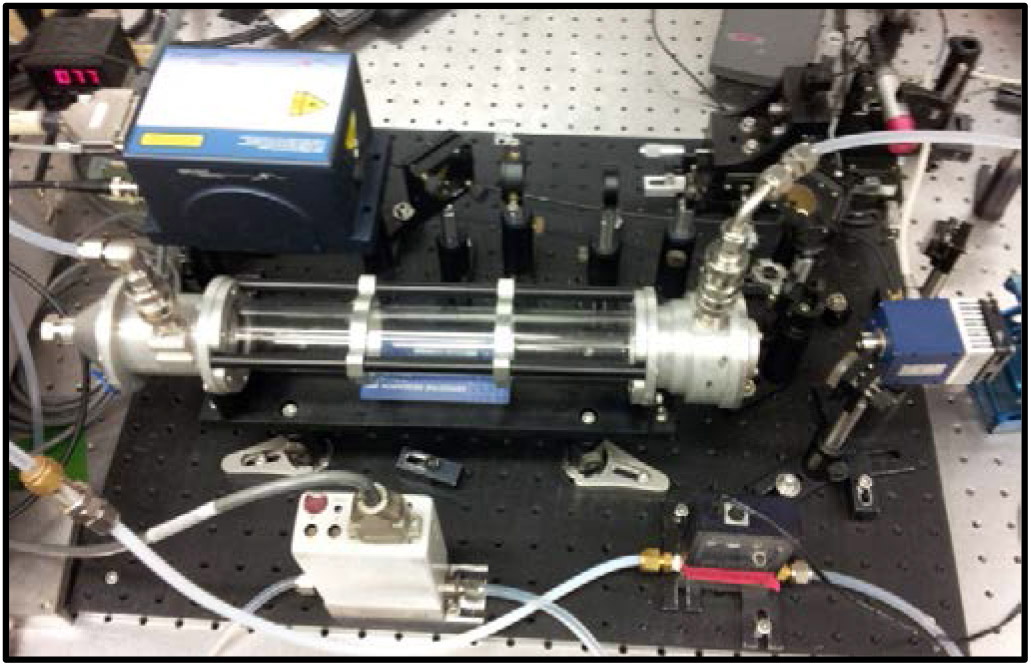 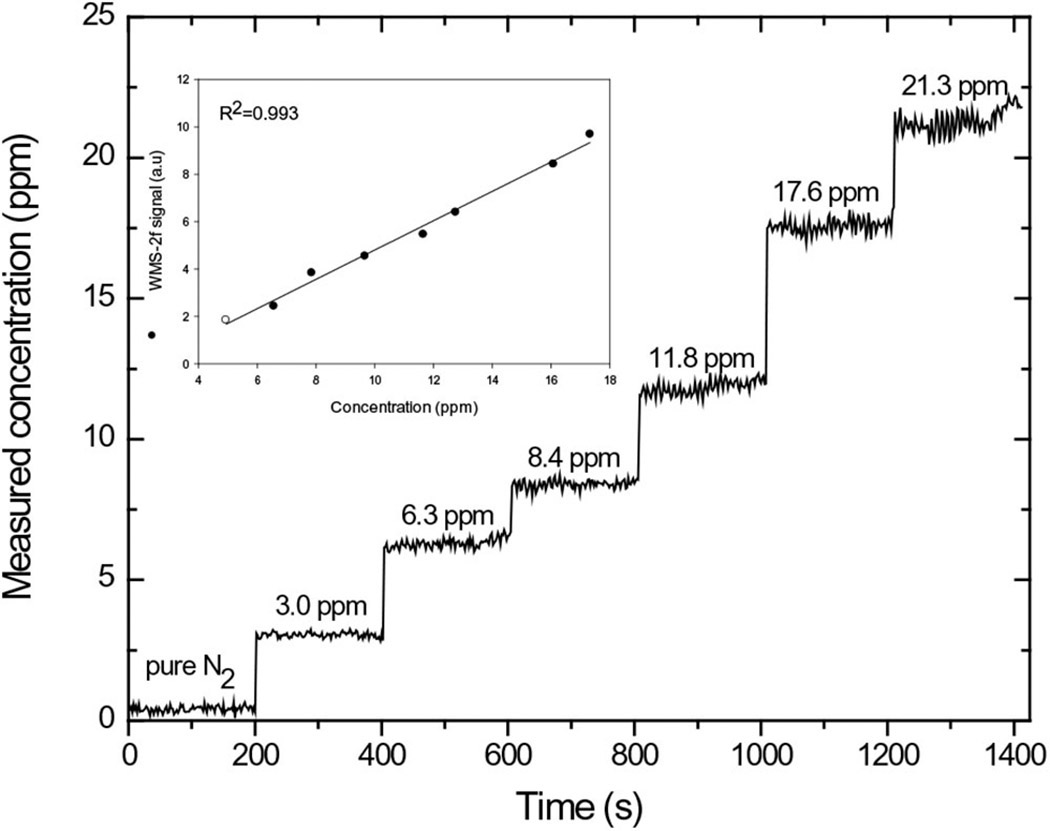 Figure 3. Response of the sensor system to different concentrations of H2O2at 20Torr. R2: Coefficient of determination.

Our current configuration for the sensor system allows detection of H2O2 at the ppb level (MDL of about 25ppb for a 280s optimum integration time). This configuration has the potential for continuous monitoring of H2O2 at industrial sites, as well as at locations that are undergoing VPHP-based decontamination. The relatively compact layout of our sensor means that it can be deployed at a variety of locations for the determination of average permissible exposure levels of gas-phase H2O2. In addition, our system has no restrictions associated with the relative humidity of the measurement sites. The interference-free absorption line that we selected for our sensor system, together with the MDL that we can achieve, also means that our system is suitable for the direct analysis of exhaled breath (in which water concentrations close to the saturation level are expected).

In summary, we have developed a sensor system that is based on the integration of a CW EC-QCL (with an MHF operating range of 1225–1285cm−1) and a commercial multipass absorption cell (with a 76m optical path length) for the detection of H2O2 at the ppb level. With an optimized configuration, we can achieve an MDL of about 25ppb with a 280s integration period. From the results of our calibration tests, we find that the sensor system exhibits a linear response at different H2O2 concentrations, when it is operated at optimum pressure and modulation amplitude. We have targeted a specific interference-free H2O2 absorption line at 1234.055cm−1, which alleviates interference issues that have been reported in previous mid-IR-based H2O2 sensing systems. Our system is therefore suitable for the monitoring of H2O2 at industrial sites, in decontamination/sterilization locations using VPHP, and in medical applications. In our future work we will focus on further improving the sensitivity of the sensor system. We aim to reduce its MDL to a level that makes it suitable for use in additional circumstances (e.g., the monitoring of atmospheric concentration of H2O2).

Nancy Sanchez received her PhD in environmental engineering from the University of Akron in 2013. She is currently a research scientist. Her current research interests include the application of laser spectroscopy for trace gas detection and the analysis of atmospheric contaminants in urban areas.

Robert Griffin is professor and chair of Civil and Environmental Engineering. He received his BS from Tufts University in 1993, and his MS (1997) and PhD (2000) from the California Institute of Technology. His research interests include field, laboratory, and computational investigations of the effects and behavior of organic species in the troposphere.

Yajun Yu is a PhD candidate in the Electronic Information School at Wuhan University, China. In August 2014, he joined the Laser Science Group at Rice University as a visiting scholar. His current research interests are focused on mid-IR laser-based optical sensors for trace gas detection.

Frank Tittel is the Josephine S. Abercrombie Professor of Electrical and Computer Engineering. He obtained his bachelor's (1955), master's, and PhD in physics (1959) from the University of Oxford, UK. His current research interests include laser spectroscopy and laser applications in environmental monitoring, industrial process control, and medical diagnostics.

Lei Dong received his PhD in optics from Shanxi University, China, in 2007. From 2008 to 2011 he was a postdoctoral fellow and from 2014 to 2015 he was a visiting professor at Rice University. He is currently a professor in the State Key Laboratory of Quantum Optics and Quantum Optics Devices. His research interests include optical sensors, trace gas detection, and laser spectroscopy.