A new set of measurements provides the tightest ever constraint for the Bell parameter, which constitutes the closest ever approach to the Tsirelson bound.
24 February 2016
Hou Shun Poh, Siddarth K. Joshi, Alessandro Cerè, Adán Cabello and Christian Kurtsiefer

It has been shown1 that the results of spin measurements on quantum systems cannot be explained with local theories. This is because these theories violate certain inequalities in the correlations between the measurement outcomes from two distant locations (A and B). The simplest of these ‘Bell inequalities’ is that proposed by Clauser, Horne, Shimony, and Holt (the CHSH Bell inequality).2 This can be expressed as |S|≤2, where S (the Bell parameter) is a combination of correlations, E(ai, bj), defined by Equation 1.

In previous work, Boris Tsirelson3 has also shown that, according to quantum theory, |S| has an upper bound of

(i.e., about 2.82843…). Alexei Grinbaum,4 however, predicted that the violation of the Bell CHSH inequality has a different upper bound, of 2.82537(2), i.e., slightly smaller than the Tsirelson bound. This alternative estimate arises from an attempt to address issues associated with the cut between the observer and the observed system5 in quantum theory. If Grinbaum's limit cannot be exceeded, this would support the idea that quantum theory is only an effective description of a more fundamental theory.4 It would thus have a deep impact within physics and the field of quantum information processing. Highly accurate experiments are therefore required to investigate potential violations of the Bell CHSH inequality.

The violation of Bell's inequality has previously been observed in several experiments. Many of these tests were based on the generation—from cascade decay in atoms6, 7 or from the exploitation of non-linear optical processes8–12—of correlated photon pairs. Other successful demonstrations of the inequality violation have been based on the internal degrees of freedom of ions13–15 and neutral atoms,16 Josephson junctions,17 and nitrogen-vacancy centers in diamond.18 The different results obtained for the Bell parameter, together with the corresponding uncertainties, are summarized in Figure 1. All the available experimental results are consistent with the Grinbaum bound.6–19 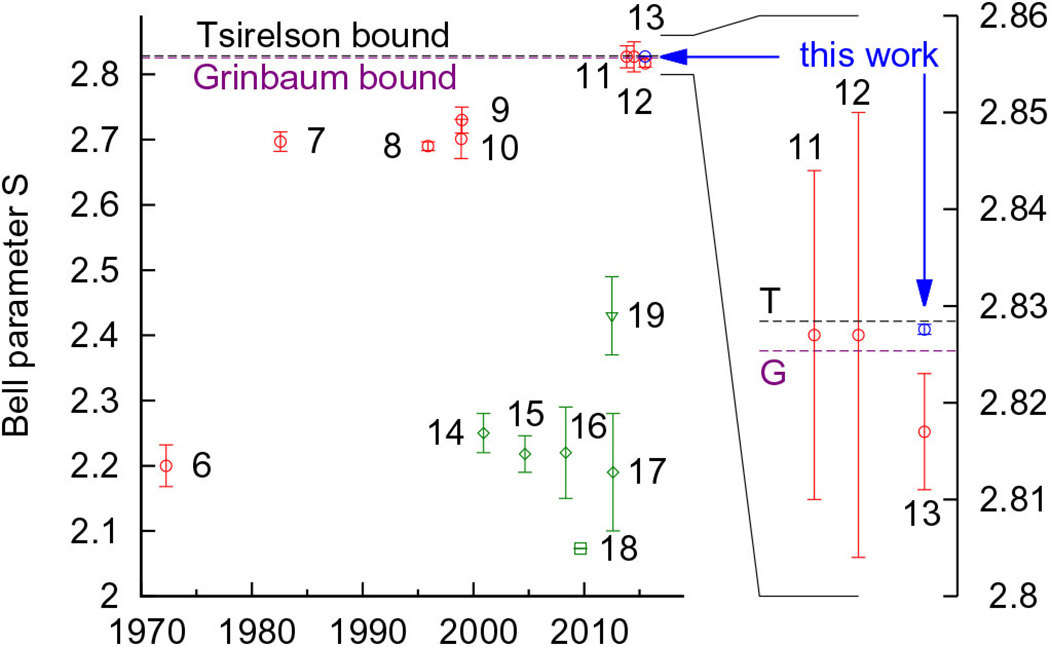 Figure 1. Selected results from experimental tests of the Clauser, Horne, Shimony, and Holt (CHSH) Bell inequality. Results that are close to the Tsirelson (T) and Grinbaum (G) bounds in photonic systems (circles), atoms and ions (diamonds), Josephson junctions (squares), and nitrogen-vacancy centers in diamond (triangles) are shown. Numbers denote the relevant references. The x-axis shows the year of the experiments, and the y-axis gives the corresponding Bell violation (S) obtained in previous studies (left) and this study (right). Figure is adapted from a previous publication.20

Motivated by this status quo, we have attempted to approach the Tsirelson bound experimentally.20 We are therefore able to make direct observations that can be compared with the prediction of the Grinbaum model. This kind of experimental search for the maximum violation of a Bell inequality1 also allows us to test the principles that are used to predict the Tsirelson bound,21–23 i.e., to test them as possible explanations of all natural limits of the correlations.

Our experimental setup is shown in Figure 2. We used the output of a laser diode (central wavelength of 405nm) to pump a barium borate crystal that was cut for type II phase-matching. Spontaneous parametric down-conversion in the slightly non-collinear configuration generated photon pairs. These pairs consisted of a horizontally (H) and vertically (V) polarized photon, at a wavelength of 810nm. To optimize photon collection, we used two single-mode fibers to define two spatial modes that were matched to the pump mode.24 We also used a half-wave plate and a pair of compensation crystals (CCs) to deal with the temporal and transversal walk-off.8 These also allowed us to adjust the phase between the two decay components and thus obtain the maximally entangled singlet state. We used film polarizers to perform the basis choice and polarization projection. Photons were detected by avalanche photodiodes, and the corresponding detection events from the same pair were identified with a coincidence unit. To obtain a very clean maximally entangled singlet state, we had to carefully align the photon pair collection so that the two polarization contributions (HV and VH) were balanced. We were able to adjust their relative positions with the CC. We minimized higher-order parametric conversion processes25 by restricting the pump power. As expected, the rate of coincidence events depended on the orientation of the polarizers. In our experiments this rate ranged from 26 to 217s−1.

Figure 2. Schematic diagram of the experimental setup. The polarization correlations of entangled photon pairs are measured with the use of film polarizers (POL) placed in front of the collection optics. All photons are detected by the silicon avalanche photodetectors (DA and DB), and are registered with a coincidence unit (CU). LD: Laser diode. SMF: Single-mode fiber. BBO: Barium borate crystal. λ/2: Half-wave plate. CC: Compensation crystal. IF: Interference filter.

We measured high visibilities of 99.9±0.1%, both in the ±45° and the natural H/V linear polarization basis for the polarization correlations, by using interference filters that had 5nm bandwidths (full width at half-maximum) centered at 810nm. Our results therefore indicated a high quality of polarization entanglement. Furthermore, to compensate for imperfections in the state generation and errors in the setting of the polarizers, we optimized the angular settings of the polarizers. We could thus observe the largest possible violation. We estimated the correlations (E)—see Equation 2—from the coincidence counts (N) between A and B for the settings of the polarizers as:

To acquire sufficient statistics, we collected coincidence events for each of the 16 settings that were required to evaluate S for 1 minute. We then repeated each set of measurements 312 times, and registered a total of 33,184,329 pair events. From our experiments—via Equations 1 and 3—we thus obtained a value for S of 2.82759±0.00051 (see Figure 1). This can also be expressed as a separation of

Our result violates Grinbaum's bound by 4.3 standard deviations and constitutes the tightest experimental test of Tsirelson's bound that has ever been reported. We have therefore falsified the thesis that quantum theory is only an effective version of a deeper theory. We have also reinforced the concepts that quantum theory is fundamental and that the Tsirelson bound is a natural limit. In addition, our conclusion strengthens the potential value of principles in which the Tsirelson bound21–23 is used to explain the natural limits of correlations in all scenarios.

In summary, we have conducted an experimental test of the CHSH Bell inequality, to try and approach the Tsirelson bound. Through these experiments we have achieved a new value for the Bell inequality and the closest ever test of the Tsirelson bound. Our work therefore demonstrates the possibility of experimentally reaching this bound, which has important consequences for quantum information and the certification of a variety of physical properties. Given the implications of our work, we now wish to see how much closer we can approach the Tsirelson bound. Currently, we are trying to identify the sources of errors and are working on ways to minimize them, and thus achieve a tighter bound.

We acknowledge support from the Foundational Questions Institute large grant project ‘The Nature of Information in Sequential Quantum Measurements,’ the European Regional Development Fund project ‘Advanced Quantum Information’ (Ministry of Economy and Competitiveness, Spain), as well as the National Research Foundation and Ministry of Education in Singapore (through Academic Research Fund MOE2012-T3-1-009).