In recent years, new sensor systems based on optical methods have been commercialized for laboratory use by several companies.1 These systems, which enable the detection of evanescent fields (i.e., electromagnetic fields that do not propagate), have demonstrated the high sensitivity of optical methods for sensing applications and have proven to be useful in automated applications. However, many fields (e.g., clinical diagnostics, environmental monitoring, and the food industry) require small, portable, easy-to-use, and robust real-time diagnostic systems. Ideally, all the functionalities of these ‘lab-on-a-chip’ (LOC) devices—from sample preparation to signal delivery—would be integrated. Most devices consist of different components (e.g., microfluidics, light source, detector, sensor, and readout) that are developed using different technologies. The fabrication of a range of components and functionalities using the same technology would represent a significant contribution towards simplifying the development of compact LOC point-of-need devices. Optical sensors are particularly promising candidates for integration and fabrication using inexpensive technologies.

In today's LOC devices, the sensors are often useful for only a few measurements. Chips manufactured via CMOS processing have become so economically efficient that it is now affordable to implement a high degree of functionality on a disposable chip. The most significant recent example of this is the realization of a silicon-on-insulator-based platform, in which both the sensor and detector are designed as ring resonators. In this device, the p-i-n type detector is engineered with defects that enhance its sensitivity at wavelengths of 1.55μm.2 Another promising approach demonstrates the complete integration of a light source, a reverse-biased avalanche photodiode, a sensor, and a p-n detector on the same silicon chip using CMOS technology.3, 4

We have developed a device that combines the advantages of both of these approaches. Our integrated evanescent-field photonic sensor system is based on small-footprint microring resonators (100μm in diameter). The size of these components allows for the dense integration of sensor sites. The system is designed for operation from the edge of the visible spectrum to the near-IR (0:85μm), where the absorption of water (which is in competition with the absorption of the species to be monitored and can reduce the overall sensitivity of the sensor) is about three orders of magnitude lower than it is at 1:55μm. Low-cost vertical-cavity surface-emitting laser diodes (VCSELs) can be used as a light source for this spectral range. This spectral choice also enables the development of efficient p-i-n detectors because the intrinsic absorption of silicon is high at these wavelengths.

Our chip consists of a circuit based on single-mode silicon oxynitride waveguides with propagation losses as low as 0.8dB/cm at 850nm. The design (see Figure 1) implements ring-resonator sensors and lateral polycrystalline-silicon p-i-n detectors, both of which are monolithically integrated on top of the output waveguides using CMOS technology.5 Low-cost single-mode VCSEL diodes are used as the light source.6 Directional couplers split the light equally into four sensing sites. The light is then guided toward p-i-n photodetectors, which operate at a low reverse-bias voltage of 3–5V. A change in the refractive index at the surface of the microrings (induced, for example, by the species being monitored) results in a resonance shift. This shift can be monitored by tuning the wavelength of the VCSEL and measuring the transmitted optical power through the p-i-n diode. 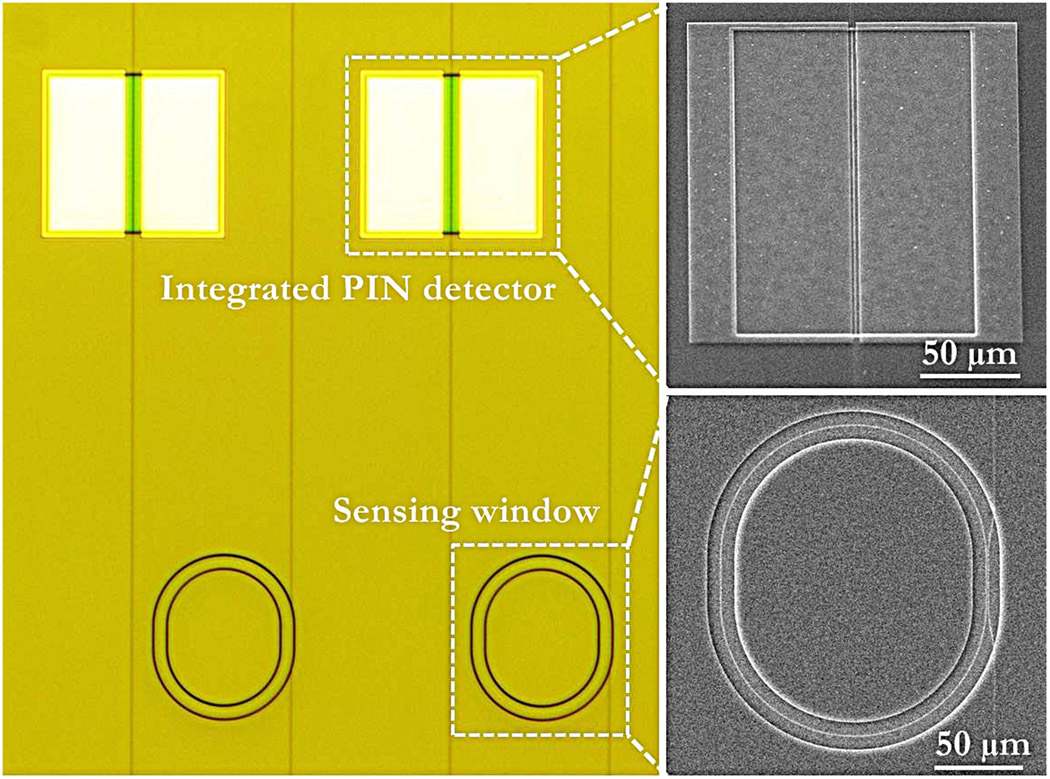 Figure 1. Optical (left) and electron (right) microscope images of the main part of the photonic circuit. Microring-resonator-based sensors are monolithically integrated with silicon p-i-n (labeled PIN in the figure) photodetectors.

We made simultaneous measurements of the whispering-gallery-mode (WGM) spectra from a water-glucose solution by using the integrated and commercial fiber-coupled photodetectors, see Figure 2(a) and (b). The resonances at wavelengths of about 850nm—see Figure 2(c)—are clearly visible for both cases of acquisition (i.e., via both the internal and external detector). This demonstrates that the biosensor response can be easily monitored using the integrated photodiode. We estimate the responsivity of the p-i-n photodiodes to be about 0.38A/W. To evaluate the bulk sensitivity of the sensors, we measured—see Figure 2(d)—the varying concentrations of a glucose-water solution by observing the real-time spectral shift of WGM resonances. All sensors on the chip showed the same behavior with each measurement, which demonstrates the applicability of the device for multiplexed detection. With this device, we achieved a bulk sensitivity of 80nm per refractive index unit (RIU) and a limit-of-detection value of 3×10−6 RIU. 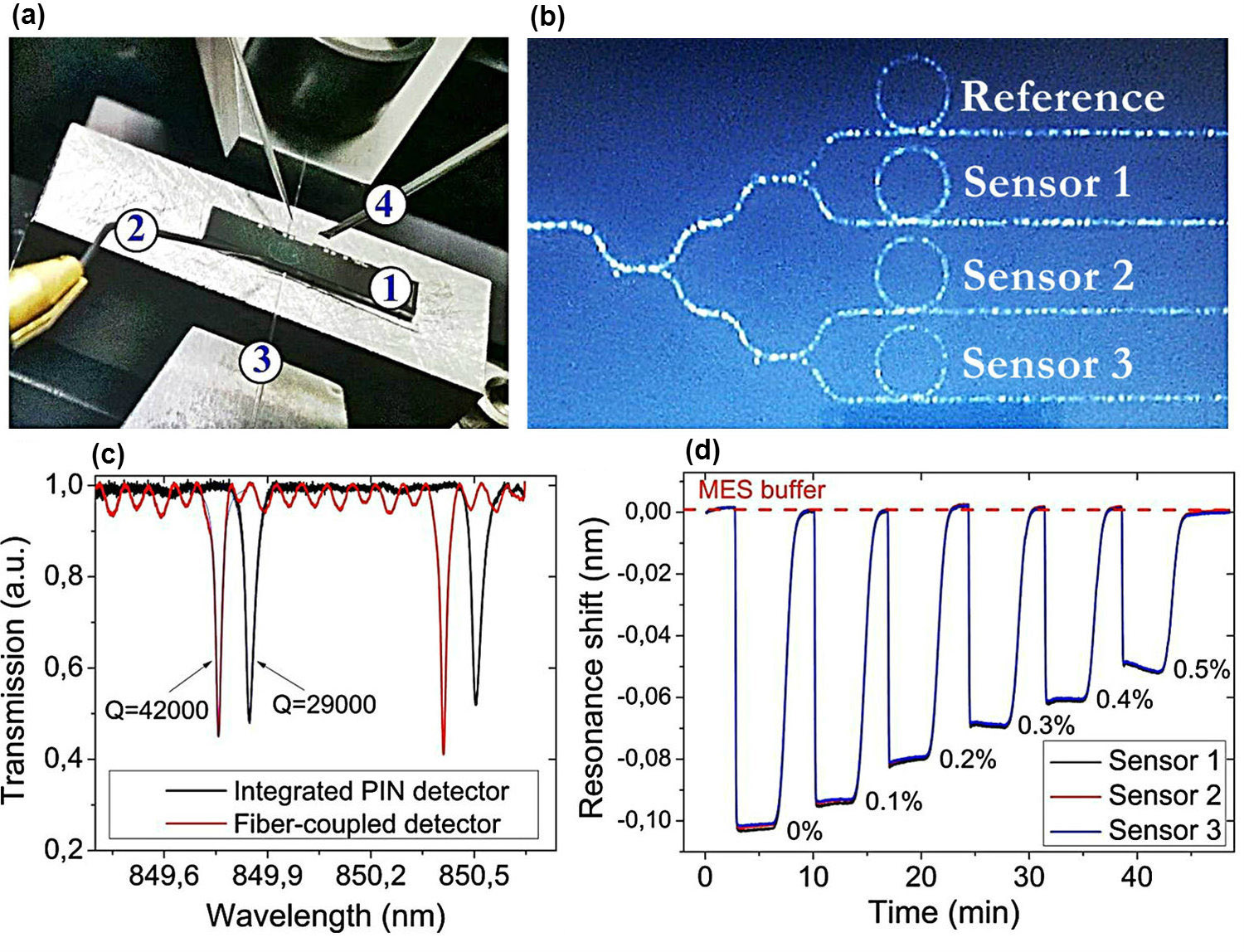 Figure 2. (a) The experimental setup. Labels mark the sensor chip (1), two electrical contacts (2 and 3), and the optical fiber (4). (b) Light circulating in the sensor chip, as monitored by an IR camera. (c) Simultaneous measurement of the transmission spectra obtained via the integrated p-i-n (blue) and the external detector (red). Q: Quality factor. a.u.: Arbitrary units. (d) Volumetric sensing measurements of different concentrations of the water-glucose solution, achieved using the integrated sensors of our device. MES: 2-(N-morpholino)ethanesulfonic acid.

We also used the chip to detect a biological toxin (aflatoxin M1) dispersed in a water-glucose solution. We silanized the surface with 3-glycidoxypropyl methyldiethoxysilane and subsequently incubated the sensor for two hours with an amino-terminated DNA aptamer, thereby selectively binding with aflatoxin M1. After this specific surface functionalization, we were able to observe the binding of aflatoxin M1 for concentrations as low as 12.5nM.7

We have developed a highly sensitive microring-resonator-based optical sensor with an integrated detector. With our device we have demonstrated high-resolution sensing of aflatoxin M1 (down to a few nanomoles), which illustrates the potential of the device for biological-toxin detection. In our future work, we intend to integrate the VCSEL on the same chip using gratings to couple the light. This would enable the development of tiny robust optical sensors that do not require alignment, thereby significantly simplifying their use.

Georg Pucker earned his PhD from Graz University of Technology, Austria, and is now a senior researcher. His research focuses on silicon nanotechnology and silicon photonics.